April 18, 2021 4 minutes read
Please make sure these dispatches reach as many readers as possible. Share with kin, friends and workmates and ask them to do likewise.

It's becoming obvious this is just another US/UK hybrid war psyop. Observe how they double down on their BS by having either a jerk or a NATO troll, pulling a cheap stint for the benefit of the Western media.
—The Editor 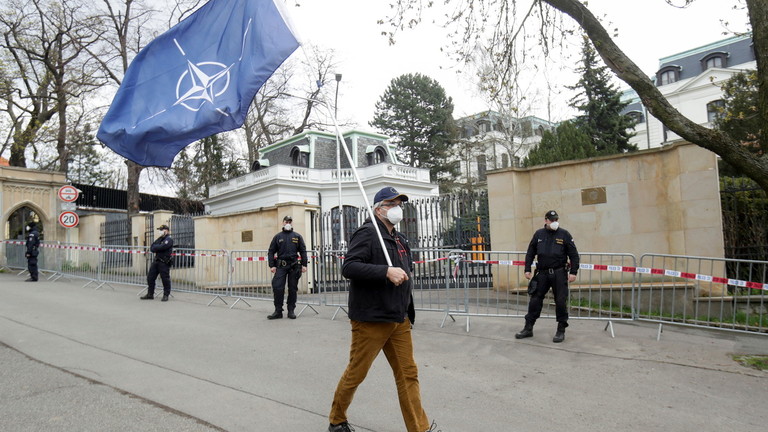 A man carrying a NATO flag outside the Russian Embassy in Prague, Czech Republic on April 18, 2021 © Reuters / David W Cerny.

Twenty Czech diplomats have been declared personae non-gratae and must now leave Russia before the end of April 19, the Russian Foreign Ministry said on Sunday, a day after Czech officials expelled 18 diplomats to Moscow.

Earlier on Sunday, the Czech ambassador to Moscow, Vítezslav Pivonka, was summoned to the Foreign Ministry, which expressed a “strong protest” over Prague’s actions this weekend. Citing allegations of the involvement of Russian intelligence in a 2014 blast at a military depot in the Czech Republic, which was initially thought to be an accident, the Czech government ordered 18 Russian diplomats out of the country. The decision was announced on Saturday by Prime Minister Andrej Babis and Foreign Minister Jan Hamacek.

The envoy was also informed that 20 staff members of the Czech embassy in Moscow would have to leave Russia by the end of Monday, April 19. Reports in the media on Saturday cited diplomatic sources as having said that a proportionate retaliation from Moscow would effectively shut down the embassy, but it was not immediately clear how severely the work of the diplomatic mission has actually been affected.

Notably, the diplomatic scandal rocked Czech-Russian relations on the eve of FM Hamacek’s scheduled visit to Moscow, where he was to have discussed the possible purchase of the Russian Sputnik V vaccine.

Also on Saturday, Czech police said they were looking for two Russian citizens who were in the area of the military depot at the time of the blast, apparently implying their involvement without directly saying so. The news was met with much ridicule in Russia, as the suspects are the same men who were accused by London of the poisoning of double agent Sergei Skripal in Salisbury in 2018 – an allegation denied by Moscow. Alexander Petrov and Ruslan Boshirov have previously denied any links to Russian intelligence, claiming they were businessmen and complaining that Britain’s unsubstantiated accusations had ruined their lives.