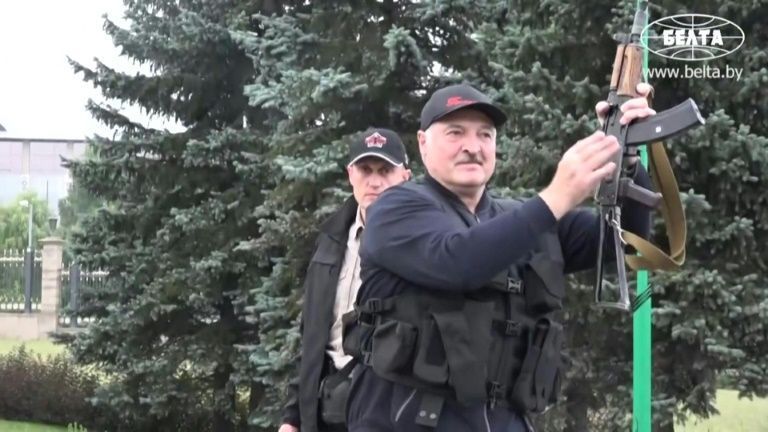 Lukashenko during recent aborted coup: Literally in the crosshairs of the empire. But Western publics won't ever hear about it. It's officially not news.

Amazing news over the week-end: President Lukashenko has declared that Biden gave the order to kill him in a coup organized by the CIA.  Now, we all know that Lukashenko says all sorts of things, many of them false or plain silly.  Except that the Russian FSB has confirmed it all!  According to the Russians, a joint operation of the (Bielorussian) KGB and the Russian FSB has uncovered the plot early on and the Russians monitored the full operation until they had enough evidence to arrest all the plotters.  Not only do the Russians have videos of their meetings, they also intercepted their Zoom videoconferences (Zoom users, use Jitsi instead!).

So far so good.  But it gets better!

Unlike the US/UK and others, the Russian FSB did not say that they were “confident” that it was “highly likely” that this operation took place.  They released all the footage of a meeting of the plotters in Moscow which confirms it all (I don’t have the time to translate that footage, but I am confident that somebody will – if you come across an English language translation, please post it in the comments section below!).

One not familiar with such operations might be baffled over why this meeting took place in Moscow and not in Warsaw or Riga.  There are several reasons for that:

Also, if you wonder whether it is credible that the FSB saved Lukashenko – I will remind you that it was the Russians who saved Erdogan from a US-backed coup that was also supposed to include Erdogan’s murder (the Turks practically admitted it publicly several times).

But it gets even better!

As soon as the accusation of a CIA plan to murder Lukashenko in a coup came out, they did what they always do: denied it against all evidence and created a huge distraction: the US colony known as the “Czech Republic” declared that the explosion of a weapons depot in the Czech Republic in 2014 was a Russian sabotage involving…   … wait for it… … drum roll…. the very same Petrov and Boshirov whom the UK accused of poisoning the Skripals!

Friends, the Czechs released this story within ONE HOUR of the Bielorussian news!  One hour, seriously!

The Czechs immediately expelled 18 Russian diplomats and the Russian reciprocated by expelling 20 Czech diplomats leaving only 5 in Moscow.  So if we use the English expression about the “shit hitting the fan”, then it would also be fair to refer to the Czechs as “shit shields” for the Empire :-)

By the way, the official Czech investigation in 2014 concluded that the explosion was caused by negligence, not sabotage but, really, who cares?  After all, look at these accusations, all as unproven and as silly as this one: (partial list in no special order)

And, of course, the western “Russia experts” all fully endorsed this nonsense (hey, that is what these so-called “experts” are paid to do; as somebody who once was a member of the IISS, I know these “experts” and their “expertise” well enough – I even resigned from the IISS in protest over its total subservience to US anti-Russian narratives).

And people who call themselves “democrats” and people capable of critical thought buy all this shit with no doubts whatsoever, none.  They don’t even see how pathetic and clueless they really are…

So the Czechs (and their US masters) are running a well rehearsed and “safe” track because they all know that the western audience is fully accustomed to hear the following:

“We accuse Russia of X, we say that our special services have evidence, but we won’t present any; as for the western media, they will, of course, trust the western special services, because they are “democratic” and, therefore, “trustworthy” (Iraq anybody?!).

Another trick, which the Czechs used in this case, is this: on the first day announce urbi et orbi that “we will soon release all the incontrovertible evidence we have” and then simply declare it classified because it is important not to show the Russians the evidence of their own, putatively Russian, operation.  As for the western press, they, of course, simply forget about that and go onto the the next Russia bashing story.

It is simple, but with the kind of sheep the western regimes deal with, it is also effective.

Finally, when truly desperate, you can count on the MI6 run Bellincat to get their “evidence”, I kid you not, from the social media on the Internet.

And, again, the western sheep “eat it all up”, with appetite and gusto!  Sic transit gloria mundi indeed!

Still, accusing the self same two putative GRU agents Petrov and Boshirov shows how desperate the Czechs were to cook up some story literally overnight.  Now they look stupid beyond any conceivable explanations for such a massive and, frankly, hilarious faceplant.

Will the people of the Czech Republic now revolt in outrage against the sheer idiocy of their leaders?  Nah, of course not.  After all, we are living in a post-truth (and, I would argue, post-logical) world where the only thing which matters is to follow the SS motto of “my honor is fidelity” and blind obedience to the masters of the day.

What about the US in all this?  Would “Biden” really be crazy enough to try to murder a foreign leader?

Well, as I like to say, past behavior is the best predictor of future behavior, right?  How many foreign leaders has the CIA actually murdered and how many did it only try, and fail, to murder?  (Note: somebody ought to compare the number of foreign leaders murdered by the US and the USSR.  I am sure that the comparison would be both shocking and very telling).  How about the official (White House admitted) murder of General Soleimani?  Was that operation not far more dangerous than to use locals to try to assassinate a weakened and embattled leader like Lukashenko?

So, you tell me: true story or “Russian disinformation”?

PS: in case you wonder, the Russians are laughing hysterically and scratching their heads wondering what in the world happened to a once civilized western society.

PPS: by the way, the Russian FSB also arrested the Ukie consul in Saint Petersburg at the moment when he was receiving classified information from what he thought was an agent.  He will be expelled.  It was a great week end for the FSB – there will be lot of medals handed out for this good work.

UPDATE1:  Maria Zakharova, the Foreign Ministry’s chief spokeswoman has now officially confirmed it all on Russian TV.
UPDATE2: The Kremlin just confirmed the Putin and Biden discussed this topic during their telephone conference.
UPDATE3: Got to love the western media, not a word about the coup, all about the Czech fairy tale.