Why do the rest of us allow the British (the former genocidal colonial power) to get away with claiming the right to destroy the world if Britain comes under some sort of less than clearly defined non-nuclear attack? Is there no legal authority to sanction the UK and its officials involved in threatening Humanity - the UN Monitoring Verification and Inspection Commission, the IAEA, the WHO, the International Criminal Court?
—Jay Janson 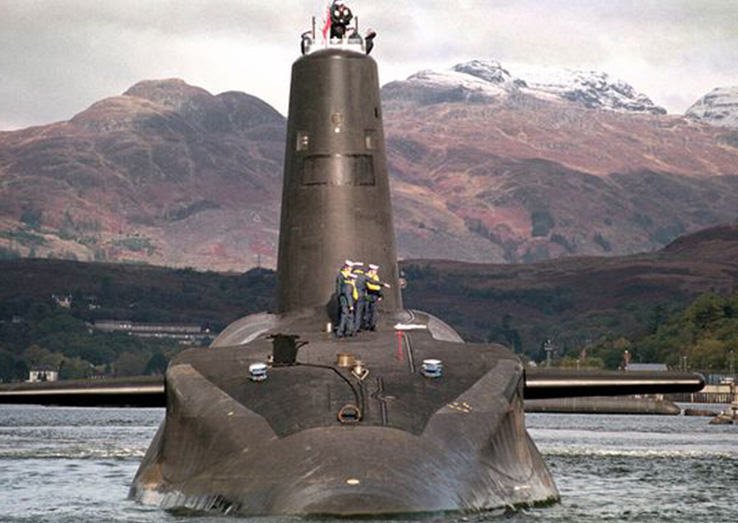 Both before the First World War and before the Second World War, the world public basically simply watched the arms build up and other preparations for war. This lackadaisical blandly interested public attitude seems to be present again. Criminally insane investors in war openly race forward with the inventing and manufacturing of ever new and novel weapons of mass destruction, while planning and propagandizing a need for war. From time to time, spokespersons for their political, media and military lackeys discuss their prerogatives for war as if the rest of us didn’t matter a hoot.

Headlined article: Britain changes policy so it can use nuclear weapons in response to ‘emerging technologies’ by Sam Snead, CNBC, Mar 17 2021. 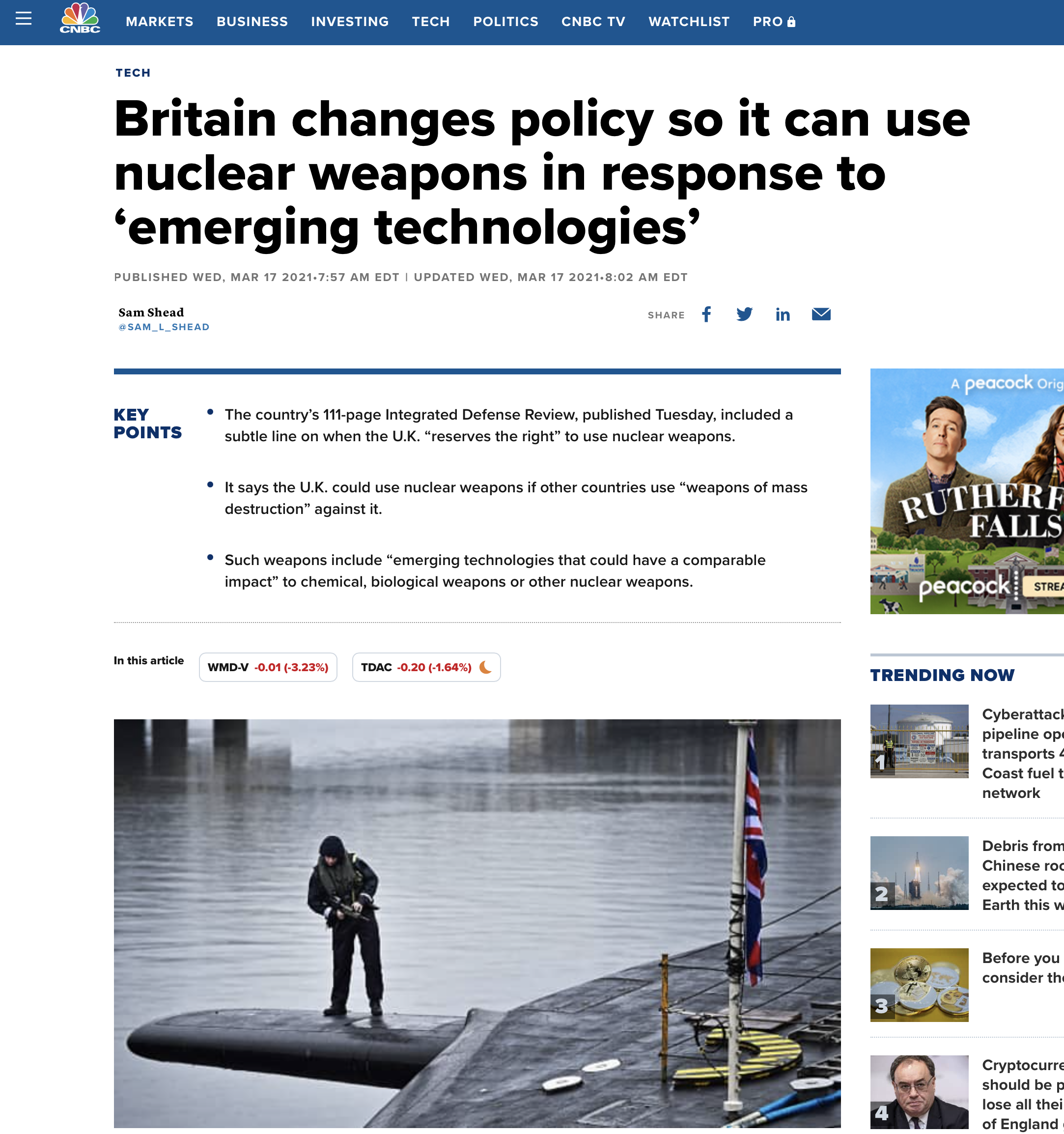 LONDON — The U.K. has changed its defense policy which may enable it to use nuclear weapons in response to “emerging technologies.”

The country’s 111-page Integrated Defense Review, published Tuesday, included a subtle line on when the U.K. “reserves the right” to use nuclear weapons.

It says the U.K. could use nuclear weapons if other countries use “weapons of mass destruction” against it. Such weapons include “emerging technologies that could have a comparable impact” to chemical, biological weapons or other nuclear weapons.

So if the British feel or think they feel an attack of whatever sort, they have the right to cause the possible destruction of all life on the planet.

The U.K.’s nuclear program, known as Trident, was established in 1980. The Integrated Defense Review confirmed that the U.K. is allowing a self-imposed cap on its nuclear weapon stockpile to rise to 260, abandoning the previous cap of 225 warheads as well as the current reduction target of 180 by the mid-2020s.

A single Trident II submarine can inflict more death than all prior wars in history.  Twenty-four missiles, launched while submerged, each with seventeen independently targeted, maneuverable nuclear warheads five times more powerful than the atom bomb that destroyed Nagasaki, can travel 5,000 nautical miles to strike within 300 feet of 408 predetermined targets. Nuclear winter might very well follow even if no other weapons are used.

No nation or individual should be permitted to possess the power to destroy the world. An imperative need is for an informed and active public to struggle for its right to survive.” —Former US Attorney General Ramsey Clark

Is it not a crime to claim a right to endanger all life on Earth?

Is there no legal authority to sanction the UK and its officials involved in threatening Humanity - the UN Monitoring Verification and Inspection Commission, the IAEA, the WHO, the International Criminal Court? Is it not a crime to claim a right to endanger all life on Earth?

Shall we all ignore the fact that the officials of the United Kingdom claim Britain to be threatened by China, Russia and Iran without giving a reason for this claim, or what could possibly be a motive to attack Britain. And what simple-minded tough talk that leaves out mention of the incoming nuclear missiles that would be answering Britain’s Trident missiles.

“The 100 page report titled ‘Global Britain in a Competitive Age,’ is the product of an integrated review of security, defence and foreign policy designed to refocus British policy in the face of perceived threats from Russia, China, and other adversaries.”

Do Earthlings just sit around and merely listen to the officials of the former #1 genocidal colonial powered British Empire citing imaginary threats from Russia and China and calling them adversaries? Neither the Chinese nor Russians refer to Britain as an adversary. It is up to us observant bystanders to call a spade a spade, such braggadocio from an apparent bunch of jerks.

The same CNBC article seemed to report a British plan to return to world empire status?

The Integrated Defense Review also outlined a new “tilt” toward the Indo-Pacific region.

“By 2030, we will be deeply engaged in the Indo-Pacific as the European partner with the broadest, most integrated presence in support of mutually-beneficial trade, shared security and values,” the document reads.

It says the U.K. will push into the Indo-Pacific region partly in response to “geopolitical and geoeconomic shifts” including China’s global “power and assertiveness,” as well as the growing importance of the region to “global prosperity and security.”

Calling the Indo-Pacific “increasingly the geopolitical centre of the world”, the government highlighted a planned British aircraft carrier deployment to the region and said a previously postponed visit to India would go ahead in April.

The Chinese and Indians, representing two fifths of the population of planet Earth, have not forgotten the long British murderous military occupation of their lands. Does PM Boris Johnson imagine the rest of us have? “Push” back ‘into the Indo-pacific region.?’ We assume that those who wrote the Integrated Defence Review mean for Britain to ‘push back in’ Asia by riding on the coat tails of the American Empire’s killing machine similarly as it has in Afghanistan and Iraq.

Whew! Sad to see such preposterous tough guy war talk utterances go unanswered by our leading alternate media anti-imperialist journalists. This nonsensical boisterous almost childish posturing of grown men may be puerile, but they are curiously officials representing a nation with the sixth most powerful economy in the world, regardless that it be ever so dwarfed by that of China.

This author, awaited some response to the British announcement of its increasing its number of nuclear warheads, but to date, has not read any published response.

Cosmic insanity! A tiny nation of twenty-five million has its citizens of all ages punished with cruel economic sanctions by the United Nations because it finally has a few nuclear weapons as a deterrent, after having been threatened for years with nuclear destruction. Meanwhile officials of the government of the United States of America, which once destroyed every North Korea city and town with napalm and bombs before threatening to use atomic bombs, regularly discuss how and when it might use its tens of thousands of nuclear tipped missiles in wars without referring to what would happen to the Earth’s atmosphere.

It was the Americans, after dropping two atomic bombs on Japanese cities, who then targeted Soviet cities before the Russians got their own nuclear bombs and replied in kind. Yet, there is never even a polite request for Americans to destroy their vast nuclear arsenal of apocalyptic proportions!

Last, but not least, is it apropos to mention the probability that humankind can no longer afford to have so much of its financial and human resources used for weapons and wars, and still have enough to avert a cataclysm by climate change and the abysmal ongoing degradation of Mother Nature.