U.S. Secretary of State Antony Blinken speaks on the importance of independent journalism, May 6, 2021 (Radio Free Europe); Julian Assange arrives at Westminster Magistrates' Court in London in his attempt to resist extradition by the Biden administration (Photo by Victoria Jones/PA Images via Getty Images)

How can you feign anger over others’ attacks on a free press when you imprison Assange as punishment for his vital revelations about U.S. officials?

Continuing his world tour doling out righteous lectures to the world, U.S. Secretary of State Antony Blinken on Thursday proclaimed — in a sermon you have to hear to believe — that few things are more sacred in a democracy than “independent journalism.” Speaking to Radio Free Europe, Blinken paid homage to "World Press Freedom Day”; claimed that “the United States stands strongly with independent journalism”; explained that "the foundation of any democratic system” entails "holding leaders accountable” and “informing citizens"; and warned that “countries that deny freedom of the press are countries that don't have a lot of confidence in themselves or in their systems.”

The rhetorical cherry on top of that cake came when he posed this question: "What is to be afraid of in informing the people and holding leaders accountable?” The Secretary of State then issued this vow: “Everywhere journalism and freedom of the press is challenged, we will stand with journalists and with that freedom.” Since I know that I would be extremely skeptical if someone told me that those words had just come out Blinken's mouth, I present you here with the unedited one-minute-fifty-two-second video clip of him saying exactly this:

That the Biden administration is such a stalwart believer in the sanctity of independent journalism and is devoted to defending it wherever it is threatened would come as a great surprise to many, many people. Among them would be Julian Assange, the founder of WikiLeaks and the person responsible for breaking more major stories about the actions of top U.S. officials than virtually all U.S. journalists employed in the corporate press combined.

Hypocrisy defines the US ruling class. Indeed most domestic policy and all of US foreign policy is a criminal act.

Currently, Assange is sitting in a cell in the British high-security Belmarsh prison because the Biden administration is not only trying to extradite him to stand trial on espionage charges for having published documents embarrassing to the U.S. Government and the Democratic Party but also has appealed a British judge's January ruling rejecting that extradition request. The Biden administration is doing all of this, noted The New York Times, despite the fact that “human rights and civil liberties groups had asked the [administration] to abandon the effort to prosecute Mr. Assange, arguing that the case . . . could establish a precedent posing a grave threat to press freedoms” — press freedoms, exactly the value which Blinken just righteously spent the week celebrating and vowing to uphold.

It was the Trump DOJ which brought those charges against Assange after then-CIA Director Mike Pompeo claimed in a 2017 speech that WikiLeaks has long “pretended that America’s First Amendment freedoms shield them from justice,” and then warned: “they may have believed that, but they are wrong.” Pomepo added — invoking the mentality of all states that persecute and imprison those who report effectively on them — that “to give [WikiLeaks] the space to crush us with misappropriated secrets is a perversion of what our great Constitution stands for. It ends now.”

But like so many other Trump policies concerning press freedoms — from defendingthe Trump DOJ's use of warrants to obtain journalists’ telephone records, to demanding Edward Snowden be kept in exile, to keeping Reality Winner and Daniel Hale imprisoned — top Biden officials have long been fully on board with Assange's persecution. Indeed, they have been at the forefront of the effort to destroy basic press freedoms not just for WikiLeaks but journalists generally.

It was Joe Biden who called Assange a "high-tech terrorist” in 2010. It was the Obama administration that convened a years-long grand jury to try to prosecute Assange. It was Sen. Dianne Feinstein (D-CA) who urged Assange's prosecution under the Espionage Act years before Trump was in office. And it was Blinken's colleague on the Obama national security team, Hillary Clinton, who praised the DOJ for its prosecution of Assange. All of this was intended as punishment for Assange's revelations of rampant wrongdoing by the U.S. Government and its allies and adversary governments around the world.

In 2013, while Blinken was serving as a high-level official in the State Department, the Committee to Protect Journalists did something very rare — issued a report warning of an epidemic of press freedom attacks by the U.S. Government — and said: “In the Obama administration’s Washington, government officials are increasingly afraid to talk to the press.” The New Yorker's Jane Mayer said of the Obama administration's press freedom attacks: "It's a huge impediment to reporting, and so chilling isn't quite strong enough, it's more like freezing the whole process into a standstill." James Goodale, the New York Times’ General Counsel during the paper's battle in the 1970s to publish the Pentagon Papers, warned that “President Obama will surely pass President Richard Nixon as the worst president ever on issues of national security and press freedom."

Even the specific "press freedom attack” Blinken referenced in that video interview — namely, Russia's recent demand that media outlets linked to foreign governments such as Radio Free Europe register as "foreign agents” with the Russian government and pay fines for their failure to do so — is one which Blinken and his comrades have wielded against others for years. Indeed, Russia was responding to the U.S. Government's previous demand that RT and other Russian news agencies register as “foreign agents” in the U.S., as well as the Biden administration's escalated attacksjust last month on news agencies it claims serves as propaganda agents for the Kremlin.

It is hardly new for the U.S. to dole out lectures which the rest of the world recognizes as complete farces. In 2015, then-President Obama was prancing around India giving lectures on the importance of human rights, only to cut short his trip to fly to Saudi Arabia, where he met numerous top officials of the U.S. Government to pay homage to Saudi King Abdullah, their long-time close and highly repressive ally whose totalitarian regime Obama did so much to fortify.

But galavanting around the world masquerading as the champion of press freedoms and the rights of independent journalists, all while working to extend the confinement and detention of one of the people responsible for much of the most important journalistic revelations of this generation beyond the decade he has already endured, is a whole new level of deceit. “Hypocrisy” is insufficient to capture the craven insincerity behind Blinken's posturing.

It is always easy — and cheap — to condemn the human rights abuses of your enemies. It is much harder — and more meaningful — to uphold those principles for your own dissidents. Blinken, like so many who preceded him in that Foggy Bottom office, theatrically excels at the former while failing miserably at the latter. 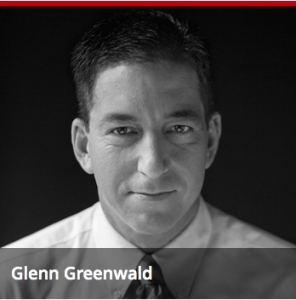 Glenn Edward Greenwald
is an American journalist, author, and former attorney. After graduating from law school in 1994, Greenwald worked as a corporate lawyer, before founding his own civil rights and constitutional law firm in 1996. In the course of nearly a decade of litigation, Greenwald represented a number of controversial clients in First Amendment cases. Greenwald began blogging on national security issues in October 2005, while he was becoming increasingly concerned with what he viewed to be attacks on civil liberties by the George W. Bush Administration in the aftermath of the September 11 attacks.[2][3] Still in 2005, Greenwald became a vocal critic of the Iraq War, and has maintained a critical position of American foreign policy (in the Middle East and around the world) ever since. Greenwald started contributing to Salon in 2007, and to The Guardian in 2012. In June 2013, while at The Guardian, he began publishing a series of reports detailing previously unknown information about American and British global surveillanceprograms based on classified documents provided by Edward Snowden. Along with other reporters, Greenwald won both a George Polk Award and a Pulitzer Prize for the reporting. He has also written best-selling books, including No Place to Hide. In 2014, he, Laura Poitras and Jeremy Scahill launched The Intercept, for which he was co-founding editor until he resigned in October 2020. Greenwald then moved to Substack, an online newsletter-based journalism platform.
Up to You.