Could USA Do Worse To Korea Than Last Time? N. Korean Joy To Have Nuclear Deterrent Understandable

PRECIS
History of genocidal crimes against Koreans in their own beloved country by the USA before and after it became the sole world superpower as a result of the Second World War, a conflict which could not have happened without mega enormous investment in, and joint venturing by US corporations and banks in building impoverished Nazi Germany up to world #1 military force. Why there is joy for having a nuclear deterrent becomes obvious.
—The Editor 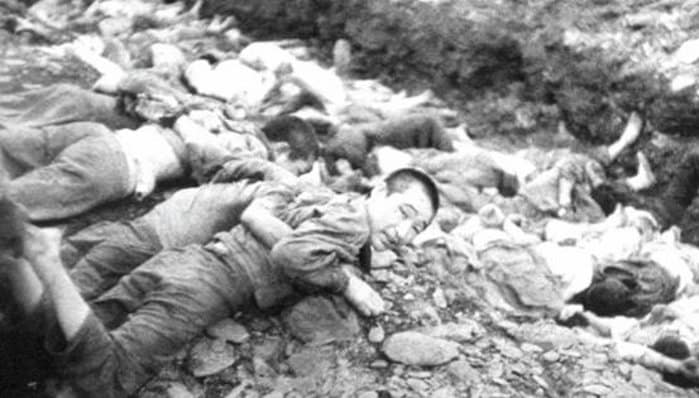 With seconds to live, a South Korean accused of collaboration or sympathy with the North or an independent Korea, looks at the camera in a testimony that the presstitutes of the Western media have buried for generations. The South Korean regime installed by the Americans committed—along with US troops—unspeakable atrocities on the civilian population, Hundreds of thousands were murdered just in the South in pacification campaigns at which the US army and the CIA were already developing an expertise.

The following is a short history of genocidal crimes against humanity bitterly suffered by Koreans in their own beloved country from savage attack, conquest, and manipulation by the USA before and after it became the sole world superpower as a result of the Second World War, which could not have happened without the mega enormous investment in, and joint venturing by, US corporations and banks in building impoverished Nazi Germany up to world number one military force; a rearmament permitted by the powerful elite in Washington and Europe in clear abrogation of the prohibitions of the Versailles Treaty - with Hitler’s promise to invade socialist Russia in mind.[1]

1871, June 10 — Adm. Rodgers, commanding five warships and a landing party of over 1,230 men armed with Remington carbines and Springfield muskets attack Choji Fortress of Kanghwa-do, and proceed to occupy the whole island (116.8 sq mi), killing 350 Korean defenders of the island while losing only three of their own, withdrawing to China when the Korean army sends in reinforcement armed with modern weapons. This war known in Korea as Sinmi-yangyo and as the 1871 US Korea Campaign in America.2 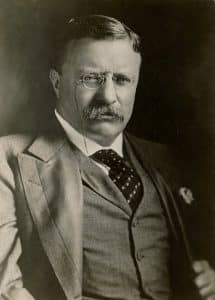 Theodore Roosevelt has historically received a good press because of his fight against the Robber Barons and other popular gestures, including the creation of national parks, and supposed conservationism, but his lust for animal killing and brutal imperialist attitudes certainly cast a pall on his image. From its birth as independent nation, hard-core imperialism has been a trait of US leaders in an unbroken chain of shame and criminality.

1905 — US President Theodore Roosevelt cuts all relations with Koreans, turns the American legation in Seoul over to the Japanese military, deletes the word “Korea” from the State Department’s Record of Foreign Relations and places it under the heading of “Japan,” approving of what will be a brutal, too often murderous, forty year occupation, during much of which, Koreans are forbidden even to speak their language; an unconstitutional act of the US president, said to have been in exchange for acceptance of the continuing US occupation of the Philippines by Japan, recognized as a half-brother empire of the European colonial powers.3

.
1918 — President Woodrow Wilson officially recognizes Korea as territory of the Japanese Empire, refuses to receive delegations from Korea and Vietnam demanding restoration of sovereignty, delegations mistakenly hopeful for Wilson having proclaimed before both houses of Congress, as an addendum to his ‘Fourteen Points“ of a day earlier, “National aspirations must be respected; people may now be dominated and governed only by their own consent. Self determination is not a mere phrase; it is an imperative principle of action…. that peoples and provinces are not to be bartered about from sovereignty to sovereignty as if they were mere chattels and pawns in a game, even the great game, now forever discredited, of the balance of power; but that all well-defined national aspirations shall be accorded the utmost satisfaction that can be accorded them;” a promise become known in the third world as an infamous, cruel and preposterous lie (the Japanese occupiers were deadly in punishing all those involved in the country-wide March 1st Korean Independence Movement).
.
1945, September 8 — US State Department officials arrive in Korea with the US Army, disband the government of the Korean People’s Republic created September 6, in Seoul, by delegates from local peoples’ offices from all provinces throughout the peninsula formed when Japan announced intention to surrender (August 10), proceed without any Korean authorization whatsoever, to immediately cut Korea into two parts to be occupied by US and Soviet troops and establishing a military government, flying in from Washington DC (in General MacArthur’s private plane), Singman Rhee, to head it; eventually installing him as president of a separate South Korea Government that will include collaborators, and will outlaw all strikes, declare the KPR and all its activities illegal and begin a deadly terror of persecution of members of the disallowed Korean Peoples Republic, communists, socialists, unionists and anyone against the the partition and demanding an independent Korea.4
.

1946-1949 — The US in effect declares war on the popular movement of Korea south of the 38th Parallel and sets in motion a repressive campaign dismantling the Peoples’ Committees and their supporters throughout the south, becoming massively homicidal as Rhee’s special forces and secret police take the lives of some 200,000 men, women and children as documented recently by the Truth and Reconciliation Commission set up by the National Assembly of the Republic of (South) Korea; on the Island of Cheju (Jeju) alone, within a year, as many as 60,000 of its 300,000 residents are murdered, while another 40,000 fled by sea to nearby Japan some two years before the Koreans from the north invade the South. [Wikipedia] 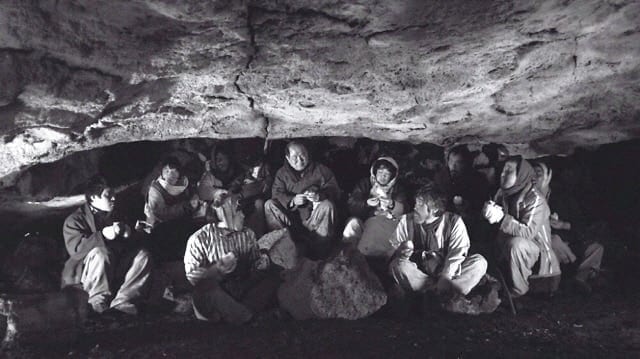 The Jeju massacre in film.  South Korean Director O Muel occupies a rare place in Korean cinema, being one of the very few filmmakers creating works about Jeju Island. All of his previous films were shot on his native Jeju, in Jeju dialect, featuring the lives of people living on the island. O’s latest film “Jiseul,” however, is an artful, grim piece about a horrific historical event on the island. Unveiled to the press on Sunday as part of the Busan International Film Festival, it tells the story of a group of some 120 villagers who hid from soldiers in a cave during the 1948 Jeju Massacre. The historical event resulted in the death of some 30,000 islanders as the government sought to quell an uprising led by a small group of communist insurgents. (Source: The Korea Herald)

7.        Neither would conglomerate US media ever report that only one month BEFORE Secretary of State Hillary Clinton's gloating and bragging as having had a hand in Gadaffi's (brutal) death, long term Italian Prime Minister Silvio Berlusconi had made an abject belated public confession, speaking before Italian reporters regarding huge Italian protests against NATO's war on Libya and its current relentless terror bombing during a strike for better work conditions in Rome in which the cry of union members was, "There is a silent massacre going on in Libya!" and "Don't let Sirte, Bani Walid and Sebha become the new Fallujah or the new Guernica".  Berlusconi, also known to own ninety percent of Italian media, confessed as follows: "Libyan leader Muammar Gaddafi hasn't been the victim of a popular uprising!" That is the conviction of Italian Prime Minister Silvio Berlusconi, who had been a friend of Gaddafi till Italy became one of the leading countries behind NATO's war against Libya in March spoke as follows: "This has nothing to do with a popular uprising. The Libyan people love Gaddafi, as I was able to see when I went to Libya", Berlusconi said on Friday during a party meeting in Rome. He said he suspects there was a plot against Gaddafi..

"Powerful people decided to give life to a new era by trying to oust Gaddafi," Berlusconi said, according to Italian news agency ANSA. Earlier, in July, Berlusconi already said he was against NATO intervention in Libya but "had to go along with it", therewith exposing the fragility of the alliance trying to murder Gaddafi.  He added: "What choice did I have considering America's pressure, President Georgio Napolitano's stance, and the Parliament's decision?" [Berlusconi says Libyans love Qaddafi: as Italians protest against NATO, Voltairenet.org www.voltairenet.org/article171382.html]

8.        Your author shall never forget seeing on a European news site, an overjoyed Saif Gaddafi elated, smiling happily, trilled, relieved, convinced that the nightmare was over because a million, or more Libyans in a total population of little more than six, were wildly demonstrating with green flags for Gaddafi and their Jamahiriva or green book government on the outskirts of Tripoli even as NATO warplanes bombed within earshot. His elation was contagious, and for a moment or two I too naively thought yes, they would have to stop bombing for this overwhelming evidence that it was wrong.

Then I remembered the incredible seeming omniscient ability of Western media to blackout news. Of course, with world opinion always in it craw, 'mainstream media' simply never reported these massive demonstrations for Gaddafi and against the US NATO UN sponsored continuous bombing then already at this juncture three and half months long. (Non-Western media covering the demonstrations did note that the bombings of Tripoli "had declined since the rise of the marches in Tripoli with a shift to increased bombing of other parts of Libya.") .

Readers may view a few of the non-Western reports with videos and photos and if interested read the full translation of Gaddafi's long speech of July 1, 2011 and HUGE PRO GADDAFI RALLY IN TRIPOLI - RAW FOOTAGE, 7/2/2011, www.blacklistednews.com/?news_id=14505 or videos can be seen with Gadaffi addressing the multitude by hookup to remote location at  www.youtube.com/watch?v=nSnlIlATIKw and  www.youtube.com/watch?v=a3lJAbRkzQ4 November 30: On this day in 1950, President Harry S. Truman announces during a press conference that he is prepared to authorize the use of atomic weapons in order to achieve peace in Korea. At the time of Truman’s announcement, communist China had joined North Korean forces ... This Day In History, The History Channel. http://www.history.com/this-day-in-history/truman-refuses-to-rule-out-atomic-weapons 10.  New York Times, June 8, 1984,

U.S. PAPERS TELL OF '53 POLICY TO USE A-BOMB IN KOREA
By BERNARD GWERTZMAN

WASHINGTON, June 7— Documents released today give details on a decision by President Dwight D. Eisenhower's Administration in 1953 to use atomic bombs in North Korea and Communist China, if necessary, to end the Korean War. http://www.nytimes.com/1984/06/08/world/us-papers-tell-of-53-policy-to-use-a-bomb-in-korea.html

JAY JANSON, spent eight years as Assistant Conductor of the Vietnam Symphony Orchestra in Hanoi and also toured, including with Dan Tai-son, who practiced in a Hanoi bomb shelter. The orchestra was founded by Ho Chi Minh, and it plays most of its concerts in the Opera House, a diminutive copy of the Paris Opera. In 1945, our ally Ho, from a balcony overlooking the large square and flanked by an American Major and a British Colonel, declared Vietnam independent. Everyone in the orchestra lost family, "killed by the Americans" they would mention simply, with Buddhist un-accusing acceptance.. Read other articles by Jay.
News 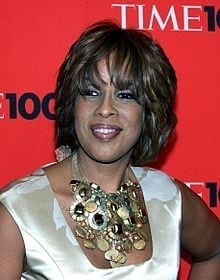