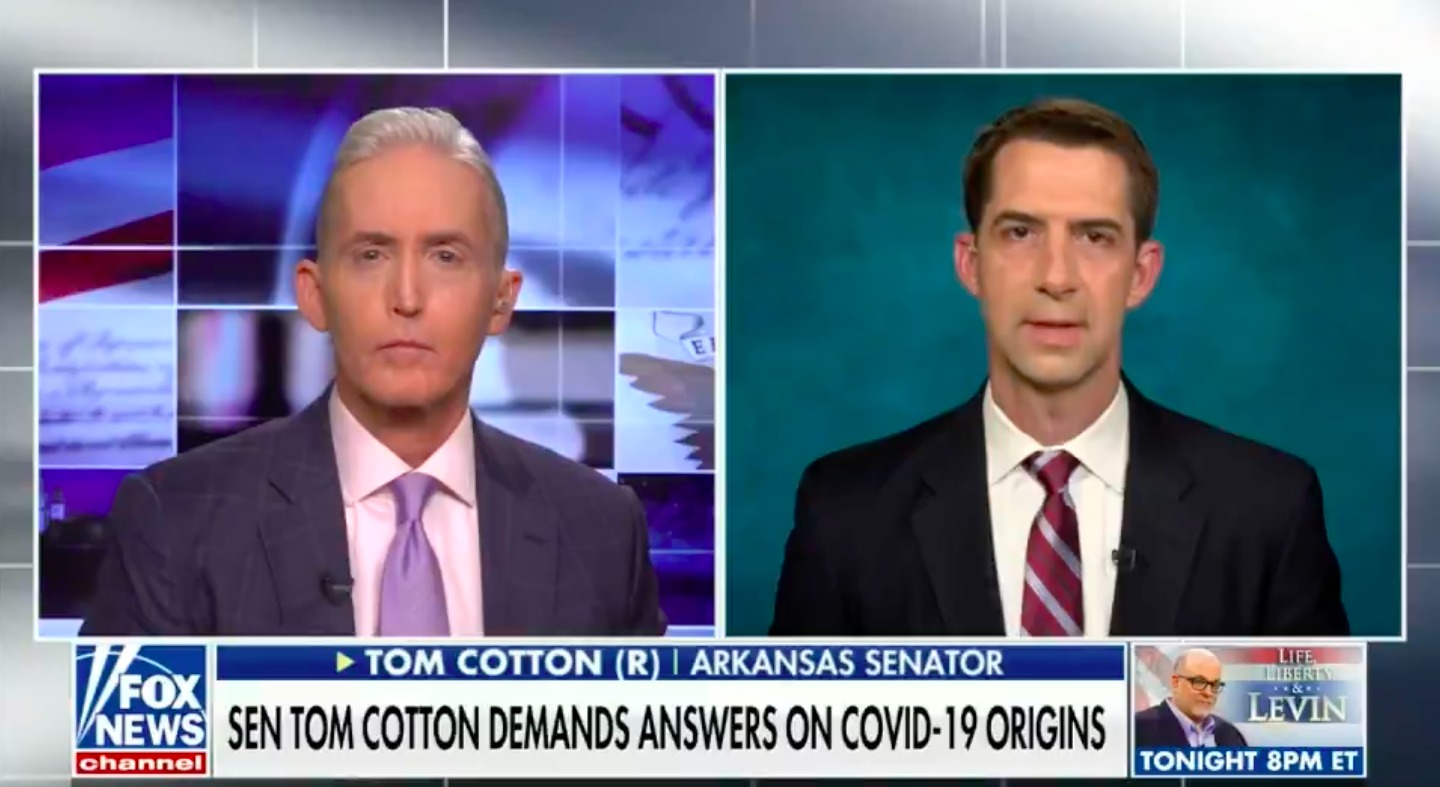 The US Congress is full to the brim with repugnant creatures, who, to begin with, never legislate for the benefit of the ordinary citizen, but even in that crowd Tom Cotton, who comes from a notoriously retrograde state, stands out for sheer vileness.

“I think the American people deserve to know what caused the worst pandemic in a century,” Cotton told the show’s space alien host. “Look, China should be made to pay for their negligence and their deceitfulness at the outset of this pandemic: covering up its origins, not being open about what was happening in that lab in Wuhan.”

“There’s lots of things we could do to impose accountability on China,” Cotton gushed. “We could for instance work their allies to ensure they’re no longer getting sweetheart deals from international financial institutions like the World Bank. We could repeal the permanent most-favored nation status we foolishly gave China 20 years ago. We could cut off visas to Chinese Communist Party officials and their princeling kids who like to come to America to go to school.”

“But if it turns out that the Chinese Communist Party and their labs were responsible for a lab leak that caused this pandemic, just imagine what the American people would demand in terms of accountability; what I said would just scratch the surface,” the senator said. “And the American people would be right to demand that kind of accountability.”

It should be held accountable. pic.twitter.com/U3upNHbfuk

Cotton has been pushing for a “full, impartial investigation into COVID-19 origins, with a special focus on the Wuhan labs,” and he knows full well that there is no mechanism in existence which could carry out such an impartial investigation. There is no reason to believe any investigation into the Wuhan lab would not be heavily biased toward a pro-US narrative and used to manufacture international agendas to smash China, and there is every reason to believe it would be.

Have you ever wondered why the people indicted and detained by the International Criminal Court are always from weaker nations—overwhelmingly African—while far more deadly war criminals like George W Bush and Tony Blair walk free? It’s because “international law” only exists to the extent that there’s an international willingness and ability to enforce it, and the US uses its military and economic might to keep the international community mostly aligned with it. If US allies ever contemplate charging America’s military with war crimes, they are threatened that they’ll wind up on the wrong side of US military protection. If ICC officials ever dare to cast their gaze upon the US government’s behavior, Washington just laughs and sanctions them.

The US actively works to bribe, bully and manipulate international governments into protecting and advancing its interests. When the US was seeking UN authorization for the Gulf War in 1991, Yemen dared to vote against it, after which a member of the US delegation told Yemen’s ambassador, “That’s the most expensive vote you ever cast.” Yemen lost not just 70 million dollars in US foreign aid but also a valuable labor contract with Saudi Arabia, and a million Yemeni immigrants were sent home by America’s Gulf state allies.

Or take the Organisation for the Prohibition of Chemical Weapons, which began in 1997 as an independent international body working toward the elimination of chemical weapons from the world with great success. That all changed in 2002 when the OPCW Director General, José Bustani, became viewed by the Bush administration as an obstacle to the agenda to manufacture international support for the Iraq invasion. The US threatened to cut off funding for the organization, Undersecretary of State John Bolton threatened Bustani’s kids, and Bustani was sent packing. Now the OPCW is a lackey of the US war machine whose leaders actively manipulate chemical weapons investigations to produce results which align with US imperialist interests.

“The American media is ignoring leaks from the Organization for the Prohibition of Chemical Weapons that suggest a whitewash.” https://t.co/8JRWi3M7xr

Hell, look at the first international investigation into the origins of Covid-19, whose findings stayed far away from anything which would turn up the US scientific establishment’s involvement in the controversial gain-of-function experiments at the very Wuhan lab in question. There’s no reason to believe an inquiry focused on the Wuhan lab wouldn’t be rigged to hurt China while leaving the US empire looking clean as a whistle, whether the virus did in fact originate there or not.

None of the people pushing for an investigation of the Wuhan lab seem to have any idea how such an investigation could take place in a fair and impartial way. They just say “We need to get to the bottom of this!” and “We need to find the truth!”, without ever saying who “we” is or how they would be “finding the truth” in a way that is not subject to the manipulations the US government always inserts into international disputes whose outcomes it has a vested interest in. It doesn’t seem like anyone’s even thought about this little wrinkle in their plan, or if they have they haven’t thought very hard.

When I point this out people act like it means I have some sort of aversion to the truth. “So you just don’t want to know where the virus started?” they ask incredulously. It’s not that I don’t want to know, it’s that there’s no possible mechanism which could produce results that I find trustworthy on an international stage which is continually manipulated by the US empire. You’d have to get the US empire to cease behaving in the way it always behaves.

When I ask people how there could possibly be a fair and impartial investigation into the Wuhan lab, they can never answer me. This is because we all know there is no possible scenario under which China or anyone else could trust that the US would not engage in the same kind of manipulations it always does. Beijing would be absolutely insane to open its doors to such an investigation, because it would have no way of preventing the US and its lackeys from manipulating the results and producing a narrative which fully incriminates the Chinese government while leaving Washington innocent.

I don’t know where Covid-19 came from; there are many different theories, some of which cast doubt that the virus originated in China at all. I just know that viruses happen, that there’s no valid reason for them to drive us apart instead of bringing us together, and that the US war machine is inherently untrustworthy.

Tom Cotton is such a disgusting warmonger that a Washington Post columnist once warned that he would be “most likely to start World War III” if he became president. He’s been openly saying for over a year that he plans on making China “pay” for the damage caused by Covid-19, and now he is seizing on the increasing acceptance of the theory that the virus may have escaped from a Wuhan laboratory to manufacture a demand for more cold war escalations against Beijing.

There’s a special revulsion among American opponents of rampant US military expansionism for Beltway war hawks who avoided military enlistment in their youth, disdainfully branding them “chickenhawks”, but in my opinion a hawk like Cotton who has seen war firsthand is far worse. Someone who seeks to expand the horrors of war without ever having experienced those horrors is less of a monster than a veteran who experienced those horrors and seeks to create more of them, because they know exactly what they are inflicting upon the world and are choosing to do it anyway.

There’s a quote from the movie Jack Reacher:

“There are four types of people who join the military. For some, it’s family trade. Others are patriots, eager to serve. Next you have those who just need a job. Then there’s the kind who want the legal means of killing other people.”

Tom Cotton’s insatiable appetite for war throughout his entire adult life makes it abundantly obvious that he is the fourth kind.

Not everyone who supports an investigation into the lab leak theory is a warmonger, but warmongers will definitely be happy if they get that investigation. One thing’s for sure: we’re not getting the truth regardless.