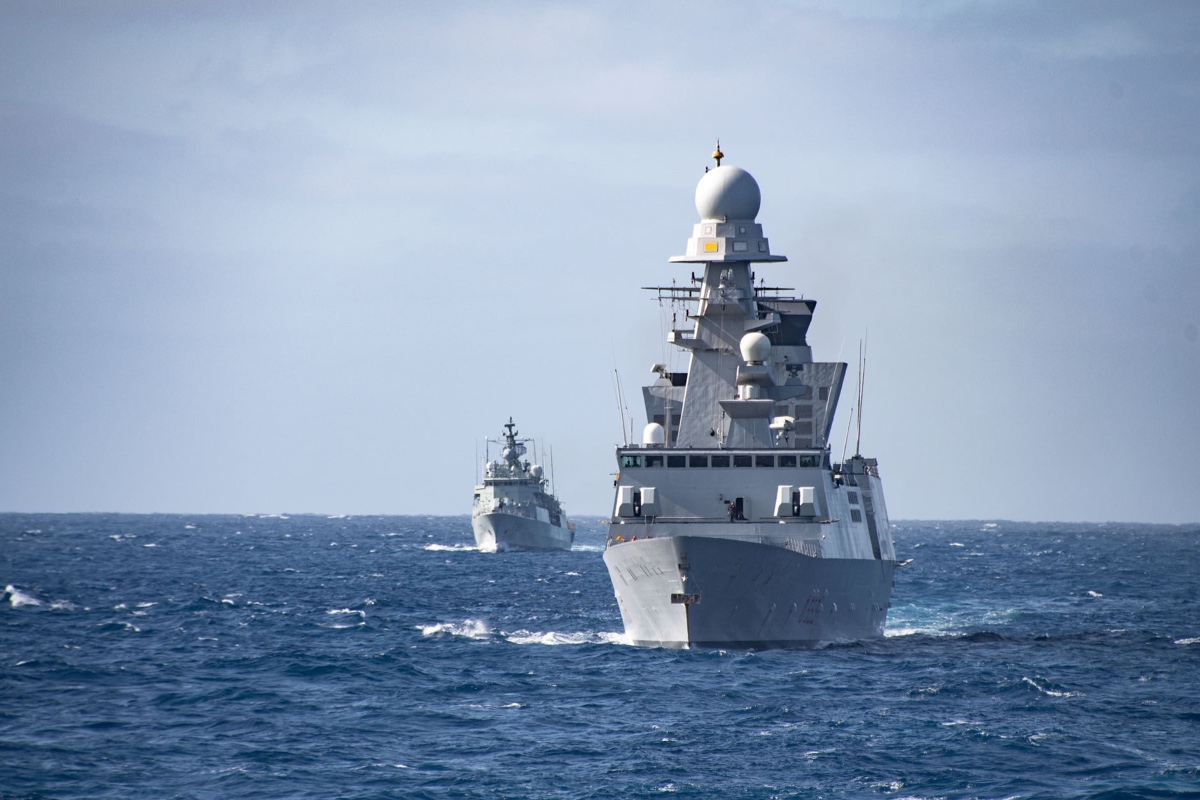 NATO vessels in Operation SeaBreeze 2021. Useless and dangerous acts designed to "poke the bear".  These criminal fools might get their wish and get swatted by Russia's military power.

Welcome to the latest NATO show: Sea Breeze starts today and goes all the way to July 23. The co-hosts are the US Sixth Fleet and the Ukrainian Navy. The main protagonist is Standing NATO Maritime Group 2.

The show, in NATOspeak, is just an innocent display of “strenghtening deterrence and defense”. NATO spin tells us the exercise is “growing in popularity” and now features more than 30 nations “from six continents” deploying 5,000 troops, 32 ships, 40 aircraft and “18 special operations and dive teams”. All committed to implement and improve that magical NATO concept: “interoperability”.

Now let’s clear the fog and get to the heart of the matter. NATO is projecting the impression that it’s taking over selected stretches of the Black Sea in the name of “peace”. NATO’s supreme articles of faith, reiterated in its latest summit, are “Russia’s illegal annexation (sic) of Crimea” and “support for Ukraine sovereignty”. So for NATO, Russia is an enemy of “peace”. Everything else is hybrid war fog.

NATO not only “does not and will not recognize Russia’s illegal and illegitimate annexation of Crimea” but also denounces its “temporary occupation”. This script, redacted in Washington, is recited by Kiev and virtually the whole EU.

NATO bills itself as committed to “transatlantic unity”. Geography tells us the Black Sea has not been annexed to the Atlantic. But that’s no impediment for NATO’s goodwill – which the record shows turned Libya, in northern Africa, into a wasteland run by militias. As for the intersection of Central and South Asia, NATO’s collective behind was unceremoniously kicked by a bunch of ragged Pashtuns with counterfeit Kalashnikovs.

The White House defines its NATO eastern flank allies as the Bucharest 9.

The Bucharest 9 includes the members of the Visegrad Four (Czech Republic, Hungary, Poland and Slovakia); the Baltic trio (Estonia, Latvia and Lithuania); and two Black Sea neighbors (Bulgaria and Romania). No Ukraine – at least not yet.

So welcome to the return, in style, of the Intermarium – as in “between the seas”, mostly the Baltic and Black, with the Adriatic as a side show.

After WWI, the drive for what would possibly become a geopolitical entente included the three Baltics, Yugoslavia, Czechoslovakia, Hungary, Romania, Belarus and Ukraine. That concoction was made in Poland.

Now, under the hegemon and its NATO weaponized arm [a branch of the Pentagon], a revamped Baltic-Black Sea intermarium is being pushed as the new Cold War 2.0 Iron Wall against Russia. That’s why the definitive incorporation of Ukraine to NATO is so important for Washington – as it would solidify the intermarium for good.

The prequel to Sea Breeze took place last week, via a farcical Britannia Rules The Waves stunt enacted like a Monty Python sketch – yet with potentially explosive overtones.

Imagine waiting at a bus stop somewhere in Kent and finding a soggy blob – nearly 50 pages – of secret documents in a trash bin detailing Ministry of Defense elaborations on the explicitly provocative deployment of the Defender destroyer off Sebastopol, in the Crimean coast.

Even a BBC journalist embedded with the destroyer smashed the official London spin that this was a mere “innocent passage”. Moreover, the Defender weapons were fully loaded – as it advanced two nautical miles inside Russian waters. Moscow released a video documenting the stunt.

It gets better. The soggy blob found in Kent revealed not only discussions about the possible Russian reaction to the “innocent passage”, but also digressions about the Brits, “encouraged” by the Americans, leaving commandos behind in Afghanistan after the troop pullout next 9/11.

That would qualify as extra evidence that the Anglo-American-NATO combo will not really “leave” Afghanistan.

The “innocent passage” happened only hours after London signed a deal with Kiev for the “enhancement of Ukrainian naval capabilities”.

On the Russian reaction front, Foreign Ministry spokeswoman Maria Zakharova summed it all up: “London has demonstrated yet another provocative action followed by a bunch of lies to cover it up. 007 agents are not what they used to be.”

Pepe Escobar is a Brazilian journalist who writes a column, The Roving Eye, for Asia Times Online and is a commentator on Russia's RT and Iran's Press TV. He writes regularly for Russia's Sputnik News, and previously wrote many opinion pieces for Al Jazeera.[/su_panel]