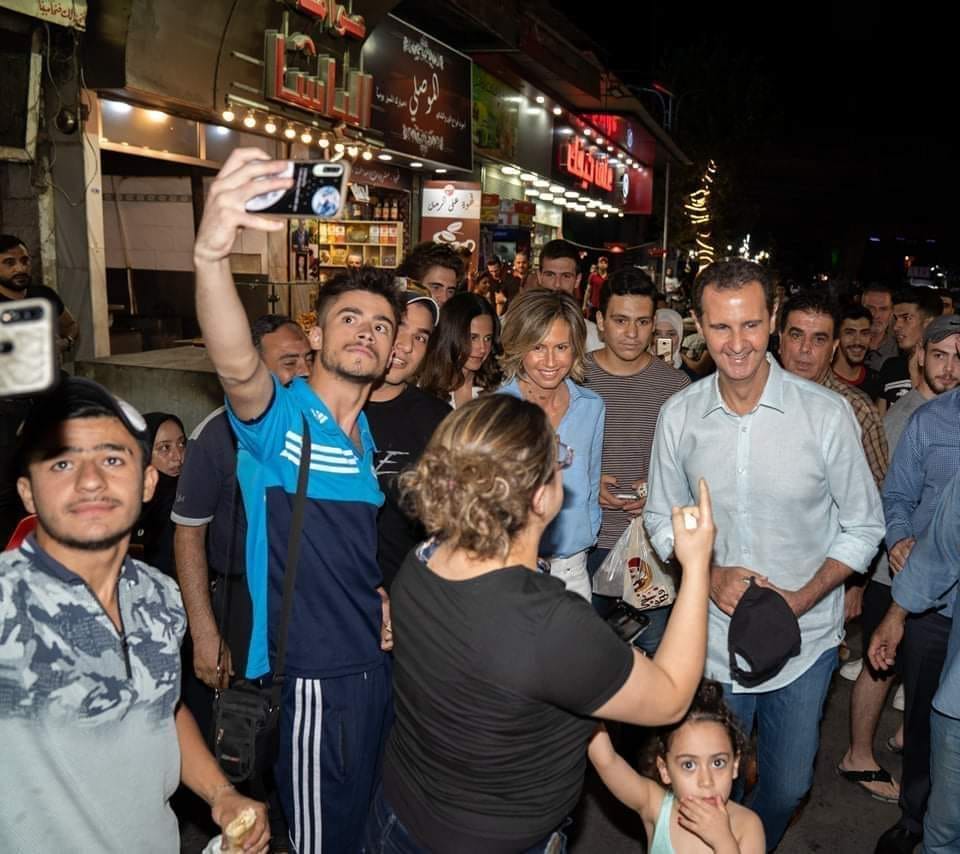 Pres. Assad and his wife among the people. How many US presidents have you seen do that?

The jig is up as the saying goes.

Meaning the fairy tale false narratives, endless lies, and cover ups of the US and allies' unpopular terrorist proxy regime change attempt war against Syria have all been exposed over the years. And this photo tells the tale.

President Assad of Syria and his family went out into the Damascus neighborhood of Midan for shawarma sandwiches just after he gave his inaugural speech at the swearing in ceremony as Syria's re-elected leader yesterday.

Problems abound in Syria. An estimated half a million people have died. Nearly half the population was displaced with millions becoming refugees outside the country. There are huge swaths of horrific destruction of infrastructure. The economy is shattered while corruption, smuggling, and the black market continue to be major issues. Electricity is scarce. The US, Turkey and Israel all are illegally occupying Syrian lands. And the army, the brave and stalwart Syrian Army soldiers with their allies, must keep fighting the remaining terrorist groups, particularly ISIS and al Qaeda.

Syria has won against the combined efforts of the "leaders of the free world" and western regional puppets to conquer it though the costs have been catastrophically and tragically high.

The problems left behind because of the Washington DC regime change addicts' aggression including the economic- and reconstruction-killing sanctions ... all primarily for Israel's ambitions to be the dominant player in the region ... will be difficult to solve and will take considerable time.

But I have every faith in the Syrian people to overcome them.

Janice Jortkamp is a US peace activist dedicated to stopping US aggression against Syria. [/su_panel]

Addendum
The Lion Among the People

5tSipolhnisored  ·
Al Assad with his family eating shoarma among his people.Al Assad in Arabic means the lion and indeed he is the lion of Syria and all the arabs.No leader in the world dares to go in the streets among his own people because they are scared but not al Assad, because his people loves him. Long live the Syrian Arab Republic