July 20, 2021 10 minutes read
Our articles depend on you for their effectiveness. Share with kin, coworkers and friends.

[su_testimonial name="—The Editor" photo="https://www.greanvillepost.com/wp-content/uploads/2021/05/PG2-front-rosier.jpg"]The material presented below is the work of great didacts, talented filmmakers and political analysts. Patricio Guzmán, the Chilean documentary filmmaker and author of The Battle of Chile (BOC), filmed literally in the teeth of the bloody Chilean counter-revolution, with his precious footage smuggled out of the country with the help of a brave anti-fascist, none other than Harald Edelstam, the Swedish ambassador (who had already distinguished himself in World War II by rescuing Jews and many anti-fascists from the Nazis), needs no introduction. The documentary, made with little money, and eventually completed with the help of Cuba, is a masterpiece of astute and precise storytelling. Indeed, Guzmán's small team seems to be always wherever something critical is happening:
* in the copper mines, where the workers, the country's "labor aristocracy", stupidly decide to oppose the Allende government;
* surveying the critical truck owners' strike that selfishly and myopically paralysed the country at a decisive moment (an ominous sign that, as Communist party leader Luis Corvalán feared, the middle and lower middle class had not been fully won over to the revolutionary project);
* or within the Chilean Congress itself, where one naked betrayal after another seals Chile's fate in accordance with plans already drawn up in the late 1960s (we now know for certain) in the US White House and in the sordid "intelligence agencies" entrusted with such tasks. All this in perfect coordination with Chile's native oligarchy.

And, of course, Guzman's lens also records the debates within the workers' councils - fraught with fear, hope and indecision; the horrible situation in the slums where morale remains unbroken; and the whining and hateful defiance that permeates the halls of the upper class, where a coup is seen as their ticket to salvation from "the filthy communists", a sentiment echoed by threatened upper classes at least since the French Revolution. All this, plus the cascade of events on the streets themselves, where almost in harsh dialectics, constant demonstrations and clashes introduce the viewer to a class struggle in real-time, the likes of which has never before or since been seen on the big screen. To say that anyone truly interested in social change needs to see The Battle of Chile to complete their education is almost to state the obvious.

To complement the eloquence and lucidity of Guzmán's images, we also offer the reader the work of Jack Woddis, perhaps one of the most underrated geopolitical analysts of the 20th century. Born in Britain and a member of the British Communist Party, Jack spent many years in the merchant navy. Almost entirely self-taught, Jack acquired a formidable education that enabled him to understand the world class struggle as a witness and participant. Author of many books whose relevance remains as strong today as the day they were written, he is probably the only modern analyst to have produced a book focusing exclusively on that crucial phenomenon, the involvement of modern bourgeois armies in counter-revolution. Given that this is a question of immense importance, literally life and death for revolutionaries, as has been seen on so many occasions, from Indonesia to the Congo to the Southern Cone of Latin America, the real question is why more revolutionary thinkers have not explored the factors that explain the behaviour of the military. It is true that the military caste has always been something of a mystery in many cultures. Confined most of the time in their separate barracks and compounds; usually interacting (and relying) only on their own, like the police, they are not really that easy to understand, and yet, as Woddis reminds us, they are not beyond the explanatory power of Marxism.

The work presented below is a chapter from Woddis's Armies and Politics (1977) that focuses on Chile, more specifically on the 1973 coup that overthrew the Popular Unity government of President Allende. (Contrary to widely accepted chauvinist propaganda, the Chilean army has staged other coups). The book has other segments also worthy of attention, such as the encouraging study of the Portuguese army's 1975 revolution that liberated Portugal from the fascist Salazar dictatorship and also helped liberate Portugal's African colonies (which turned out to be another protracted and painful struggle due to the inevitable meddling of the United States and other powers determined to prevent liberation, but we will leave that for another day). In any case, the Chilean process is extremely important, as Woddis himself underlines in his introduction to the subject. We hope you will read and watch these materials, and share them with your family, friends and colleagues.[/su_testimonial]

The Woddis chapter on Chile is presented in two formats: Flipbook, and plain PDF. The latter requires no instruction for its use, just click on the provided link and take it from there. But the flipbook can benefit from the instruction plate below: Simply click on the numbered arrows as indicated. Arrow #1 will open the book in full screen display; #2 arrow will move the pages forward or back. Press ESC if you want to exit the full screen display. 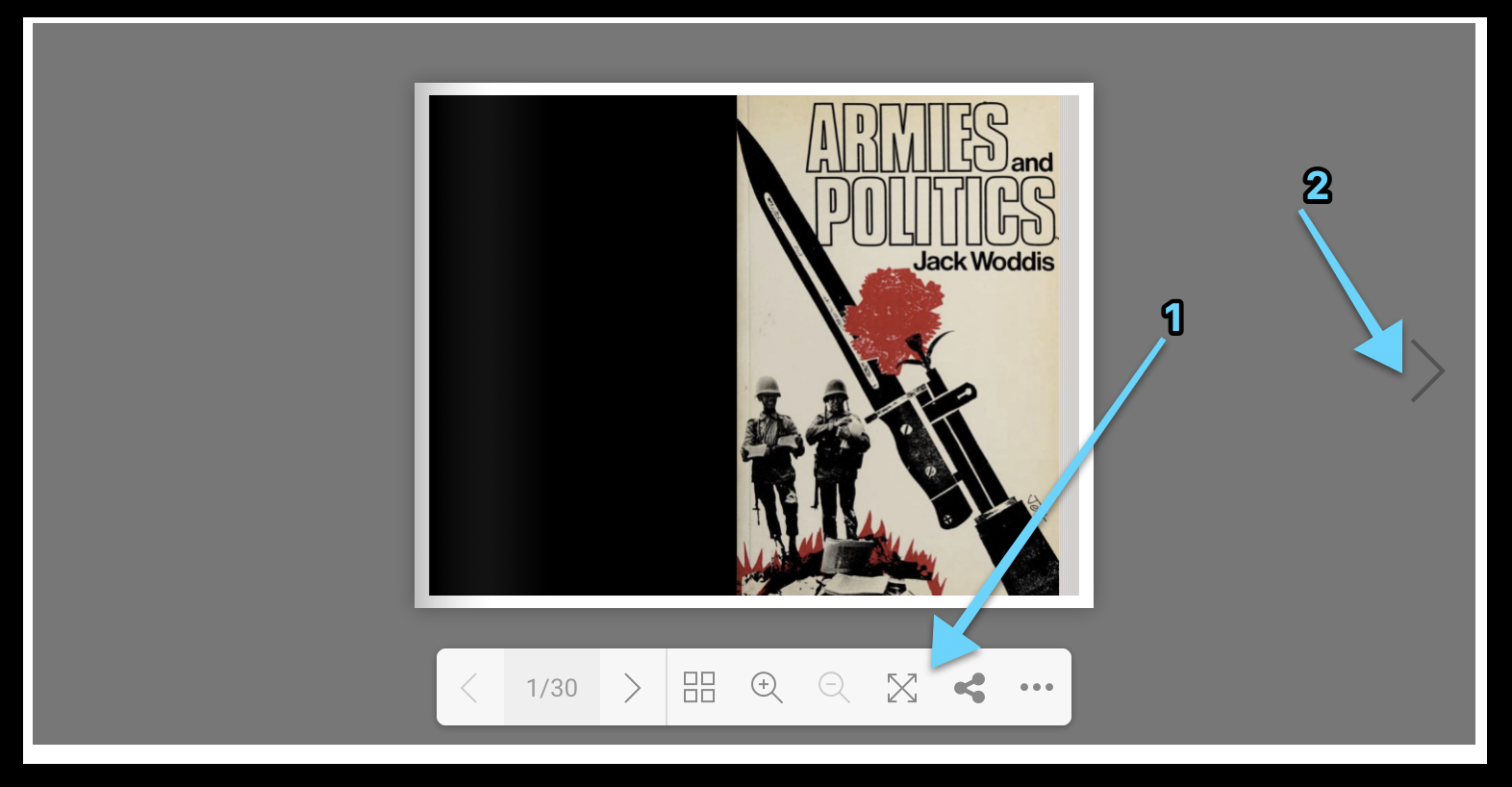 CHILE - WHY THE COUP SUCCEEDED

Woddis chapter in plain PDF:
CHILE - WHY THE COUP SUCCEEDED

J.Woddis-Armies & Politics
NOTE: A copy of the full book can be inspected on the Internet Archive.

The Battle of Chile by Patricio Guzman.
Made with the assistance of Cuba's Film Institute.

The video below was not made by Guzmán, but is a good addition to this set.

The Film Archives
The Pinochet File is a National Security Archive book written by Peter Kornbluh. About the book: https://www.amazon.com/gp/product/159... It covers over approximately two decades of declassified documents, from the Central Intelligence Agency (CIA), Defense Intelligence Agency (DIA), White House, and United States Department of State, regarding American covert activities in Chile. It is based on more than 24,000 previously classified documents that were released as part of the Chilean Declassification Project during the Clinton administration, between June 1999 and June 2000. The Pinochet File was selected as one of "The Best Books of 2003" in the nonfiction category by the Los Angeles Times. The New Yorker said, "The evidence that Kornbluh has gathered is overwhelming." in its review. The Newsweek review of The Pinochet File describes it as "...actually two distinct but intersecting books. The first is a narrative account of the Nixon administration's involvement in Chile. Its mission was to make sure that Allende's election in 1970 didn't serve as a model for leftist candidates elsewhere. The second consists of the reproduction of hundreds of salient intelligence documents released in 1999 and 2000 in response to requests by President Bill Clinton." The inclusion of key source documents allows the reader not only to corroborate Kornbluh's findings, but to acquire a flavor of the extent of U.S. covert activities within Chile, and to understand the tenor of the conversation in the White House and CIA regarding Salvador Allende's presidency. While the U.S. claimed to support Chile and its democratic election process, the documents show intricate and extensive attempts first to prevent Allende from being elected, and then to overthrow him with a coup d'état. The coup d'état required first removing the commander in chief of the Chilean armed forces (General René Schneider), who opposed military interference in political situations; he was assassinated by CIA-funded coup plotters (retired General Roberto Viaux and active duty General Camilo Valenzuela). Once Augusto Pinochet took power, his human rights violations were tolerated, even though the U.S. knew that thousands of people had been detained and American citizens Charles Horman and Frank Teruggi murdered.

The CIA fostered an extensive cover-up of its involvement in fomenting the coup, including dissembling to the Church Committee. The White House also withheld key documents. Subsequently, the role of the US in this period of history was not correctly understood based solely on the findings released at that time. Furthermore, extensive black propaganda, especially in El Mercurio, shaped world perceptions of Allende, essentially painting him as a Communist pawn and portraying the wreckage of the Chilean economy as due to his decisions. In contrast, the declassified documents show that Richard Nixon enacted an "invisible blockade" in concert with American multinational corporations and international banking organizations, which were pressured to withhold loan refinancing. Consequently, much of the history that has been written without access to these documents may need to be reexamined, as Kornbluh discusses in the book's introduction: Indeed, the documents contain new information on virtually every major issue, episode, and scandal that pockmark this controversial era. They cover events such as Project FUBELT, the CIA's covert action to block Salvador Allende from becoming president of Chile in the fall of 1970; the assassination of Chilean commander-in-chief René Schneider; U.S. strategy and operations to destabilize the Allende government; the degree of American support for the coup; the postcoup executions of American citizens; the origins and operations of Pinochet's secret police, DINA, CIA ties to DINA chief Manuel Contreras, Operation Condor, the terrorist car-bombing of Orlando Letelier and Ronni Moffitt in Washington, D.C., the murder by burning of Washington resident Rodrigo Rojas, and Pinochet's final efforts to thwart a transition to civilian rule. The inclusion of key source documents provide a rare behind-the-scenes view of covert regime change in operation. Key documents from the CIA, United States National Security Council (NSC), White House, DIA, and State Department were declassified in the year 2000. The more than 24,000 records correspond to an average of about three records per day gathered over two decades and Kornbluh’s analysis was not complete and in print until 2003.

Patricio Guzmán on The Battle of Chile

lachambreverte
For English subtitles, click on CC at the bottom right of the frame. Patricio Guzmán discusses his film The Battle of Chile (1975-1979) with film critic José Carlos Avellar in 1997.

The enormous accomplishments of the Soviet Union, despite the fascist encirclement