Home ABOMINATIONS Media in the USA

July 21, 2021 8 minutes read
Please make sure these dispatches reach as many readers as possible. Share with kin, friends and workmates and ask them to do likewise. 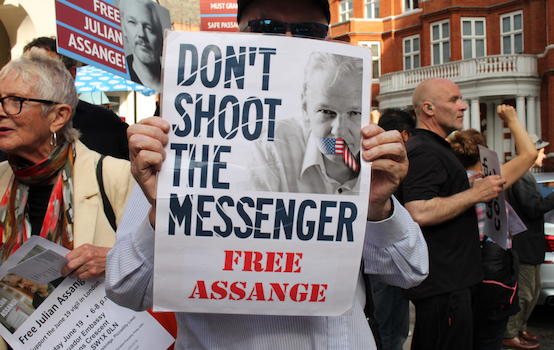 WikiLeaks tried to break the disinformation stranglehold, and see what happened: the Empire quickly moved to make an example of Assange. Disinformation is the lifeblood of a criminal world order.

Canonical URL: https://docs.google.com/document/d/1Tot1iLWpVitnP90-d4mnsWVNCb5tUhQqBTU2SzjUCYg
Short URL: http://bit.ly/OnUSMedia “Media in the USA”
Refer Also: http://bit.ly/USAOligarchy “The USA is an oligarchy”
http://bit.ly/PoliticalTerminology “Political Terminology - The 3 minute FAQ to knowing everything necessary to understand everything in American politics”

http://bit.ly/OnFreedomOfSpeech “Freedom of Speech - Why Technocrats Should Not be Allowed to Block Expression Or Filter Audiences” © Hermit 2020-2021 This work is licensed under a Creative Commons Attribution-NonCommercial 4.0 International License. Rather than copying, please link to this document using the Short URL http://bit.ly/OnUSMedia so that any updates will be seen.

What Americans call "the right" and "the left" do not exist. In reality, there are a few oligarchs (rulers in an oligarchy, rule by the wealthy and powerful) on top. The rest of us are bottoms who influence nothing and control less. Tops, working through the political,  security and media establishment (today including social media),  promote divisions within the bottoms to distract the bottoms and keep them from joining together to throw out the tops.

Most Americans have difficulty understanding that US OMM (Oligarch Managed Media) has a single primary purpose, to convey propaganda from the oligarchs (the wealthy and powerful running the USA) to the population. For propaganda to work, two prerequisites must be met. Firstly, the propaganda must appear to originate from multiple independent confirmatory sources. This is why there are tens of thousands of sources, nominally independent but all controlled by the same 6 corporations controlled by a handful of oligarchs and run, at least according to former CIA operative, William B. Bader, the CIA does not need to manipulate the media, because "there are [Central Intelligence] Agency people at the management level." Secondly, at least some of the sources must appear to be from "people like me", which is why most sources pump a mixture of entertainment, pablum, and hysteria selected to engage their audience. Thirdly, independent news sources have to be suppressed and are. See e.g. The Jimmy Dore Show, “YouTube CEO Admits Suppressing Independent News” https://www.youtube.com/watch?v=3l6praw8JUg.

Social media acts as an amplification chamber for differences, because most people never learn how to communicate with people with whom they disagree. Whenever a group demonstrates that it may have developed a way to get around this, and promotes the reality that the social, economic, and environmental problems we face are not caused by people who are different, but by the oligarchs, the oligarchs will act to limit its scope.
As there are a great deal more people identifying themselves (however invalidly) as liberals or progressives in the USA than conservatives, there are vastly more "liberal" or "progressive" oriented sources than conservative sources. When somebody examines propaganda intended for a different target demographic, cognitive dissonance arises, and the material is rejected. So a liberal watching Fox or a conservative watching MSN will suffer very similar reactions.

Social media acts as an amplification chamber for differences, because most people never learn how to communicate with people with whom they disagree. Whenever a group demonstrates that it may have developed a way to get around this, and promotes the reality that the social, economic, and environmental problems we face are not caused by people who are different, but by the oligarchs, the oligarchs will act to limit its scope. By manipulation, by law, or by force. Liberals, who are not in any meaningful sense “leftist”,  enabled this last by cheering on the silencing of the conservatives in the lead up to the appointment of Harris/Biden. 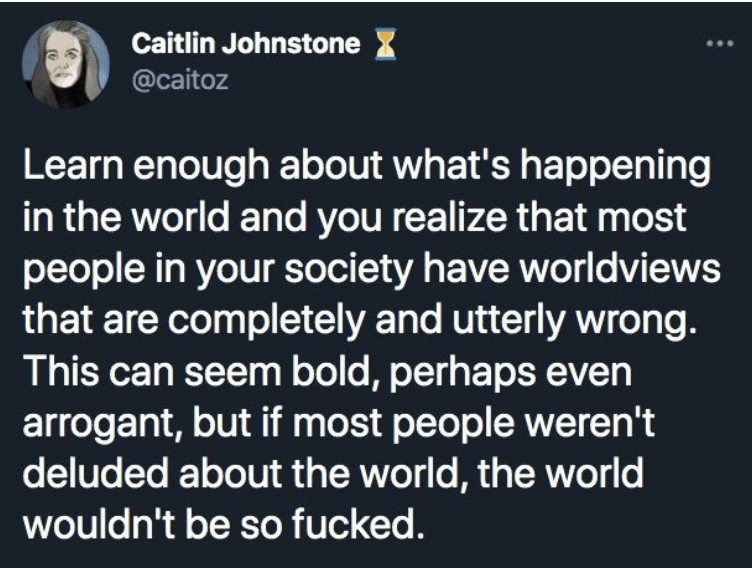 And it's not that people are dumb; intelligence has little to do with it. Some of the most intelligent people on earth promote the same deluded worldviews as everyone else. The problem isn't intellect, it's manipulation, and anyone can be manipulated no matter how smart they are.

The powerful work to manipulate the way the general public thinks, acts and votes to ensure that they remain in power. They pay special attention to who the most influential people in our society are, which is why the most prominent voices are so often the most delusional.

There are filters in place designed to keep anyone from rising to positions of influence if they don't support the consensus worldview promoted by the oligarchic empire, and once they do rise to influence they are actively herded into echo chambers which reinforce that worldview.

This is further exacerbated by the fact that the most influential voices in a virulently capitalist society will be those who have profited and benefited from the status quo. Of course they're going to believe the system is working fine, it treats them like royalty.

2 Never refer to it as the “Mainstream media” because we the public are the mainstream, and the fact that the media exists to propagandize us is not grounds to grant them an appellation they have not earned and do not deserve.
3 WebFX Team. The 6 Companies That Own (Almost) All Media [INFOGRAPHIC].  https://www.webfx.com/blog/internet/the-6-companies-that-own-almost-all-media-infographic/

5 There are some excellent suggestions here: Amy Maoz (2021-01-22). How to Talk to People You Disagree With. Getpocket. Accessed https://getpocket.com/explore/item/how-to-talk-to-people-you-disagree-with 2021-01-23.

Jessica Ashooh: The Taming of Reddit and the National Security State Plant Tabbed to Do It