The United States refused to accept gold from the USSR. This is the cause of the holodomor

The United States refused to accept gold from the USSR. This is the cause of the Holodomor. To understand what is happening now in Venezuela, read about what the Anglo-Saxons did in the USSR in the 30s of the last century. 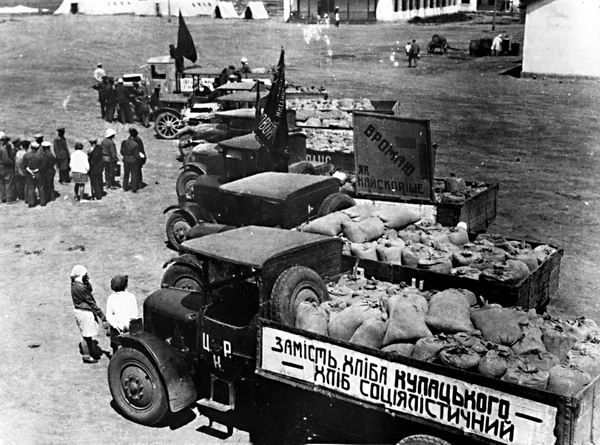 Consider the chronology of events. 1929, Russia has just come out of the civil war and the first five-year plan (i.e. industrial and economic reconstruction) is about to begin.
While the West is still preparing to strangle Soviet Russia economically, without military intervention. The first step towards this has been taken in advance by refusing to accept gold from the USSR. This makes Russia extremely sensitive to the supply of its raw materials abroad, which is now the only source of currency for the country.

After Trotsky is expelled from the USSR, the West strikes again: an embargo is placed on the import of Soviet goods to the West. Exports of timber and petroleum products, i.e. everything that paid for the supply of Western machinery to the shattered Soviet economy, were effectively banned.

Let us look at the dates: the first Five Year Plan began in 1929, the embargo was imposed in 1930 and 1931 by the United States, and a similar decree was issued in France in 1930. On April 17, 1933, the embargo is declared by the British government. That is, first the West refused to accept gold as payment from the USSR, then everything else... except grain!

Such behaviour by the West seems illogical. At the same time, the Great Depression is raging there (started just in 1929). In the United States there is an overproduction of products (including and especially grain), the government destroys grain in huge quantities, and immediately accepts grain from Russia as payment for its machine tools - instead of gold, oil and other raw materials, which are much more necessary for the United States.

The British behave even more foolishly - at that time the USSR was the main customer of the British machine tool builders, in 1932 80% of the machine tool exports from England went to the Soviet Union - and the British government has done everything to make these supplies impossible by refusing to accept not only gold, but also the forest, ore, coal and oil that England so badly needed in payment for the machine tools. Everything except grain, which the British could buy much more cheaply from the United States. [ But it was more important to create a famine in Russia to blame it on the Soviet government.]

Thus the Stalinist leadership of the USSR was presented with a choice: either refuse to rebuild industry, i.e. capitulate to the West, or continue industrialisation, leading to a terrible internal crisis. If the Bolsheviks take the grain from the peasants, there is a very high probability of starvation, which in turn can lead to an internal explosion and the overthrow of power. Whatever Stalin chooses, either way the West stands to gain.

Joseph Vissarionovich and his entourage decide to go ahead.

From the summer of 1929 the collectivisation of agriculture begins. The state collects grain and sends it to the West, but not to starve part of the population, but because there is no other option to pay for the equipment. Stalin's only hope is for a new harvest. It turns out to be small - there has been a drought in the country. The USSR cannot buy food either for gold (golden siege) or for foreign currency (because of the embargo).

There was an attempt to import grain from Persia which was ready to accept gold. But the authorities do not manage to do it in time - a disaster happens. The same that is now called the Holodomor in Ukraine.

In 1932-1933, masses of people died, and only then (!) West was again ready to accept oil, timber and precious metals from Bolsheviks. Naturally, in 1934 grain exports from the USSR came to a complete halt.

The famine of 1932-33, thoroughly orchestrated by the West, did not have the desired result: the Bolsheviks retained power. They continued to industrialise. Economic measures did not work - Stalin was rebuilding the country at any cost.

There remained military measures. And, amazingly - it was in 1933 in Germany that Adolf Hitler came to power, openly writing about his aggressive aims in the vast Russian plains.
From this historical data, it is clear that the famine in the USSR in the 30s was organised by the West, and mainly by the United States, with the aim of overthrowing the existing power in the USSR.

They succeeded in killing millions of people, but not in overthrowing Stalin. They had to raise Hitler to try to crush the Russians at the hands of the Germans. But that is another story.