Home ABOMINATIONS China’s Century of Humiliation: What Every Decent Human Being Should Know

China’s Century of Humiliation: What Every Decent Human Being Should Know

Western imperialist aggression against China has been colossal, unrelenting and sociopathic in nature. The invaders' depraved actions, amply documented, wipe out all claims to representing a superior civilisation. And most of these nations, particularly the Anglo-American alliance, are still at it, trying to impose their supremacy on the Chinese people (as well as on other nations seeking genuine independence from the US-led bloc), by threats, coercion, disinformation, and outright violence.  This historical summary, facilitated by our colleague Rebecca Chan, should leave no doubt as to the moral bankruptcy of the West, its image of progressivism, egalitarianism, and benevolence a cruel farce maintained only by the world's most cynical and sophisticated machinery of mass deception. It is indeed expertly manufactured ignorance that shields these criminal ruling elites from well-deserved public retribution. But, at last, justice may be drawing near.
—The Editor

China has come a long way since the founding of the CPC in 1921.
Had the CPC not kicked out the Western imperialists, Chinese people would live much like the indigenous people of Canada, America, Australia, Tasmania, New Zealand and wherever the Genocidal 7 tread. Children were left to die on the streets to be picked up by garbage collectors. This is what the Hundred Years of Humiliation was about. This is what I call the Opium Holocaust. This is why we celebrate the 100th Anniversary of the CPC with pride.
#CPC100 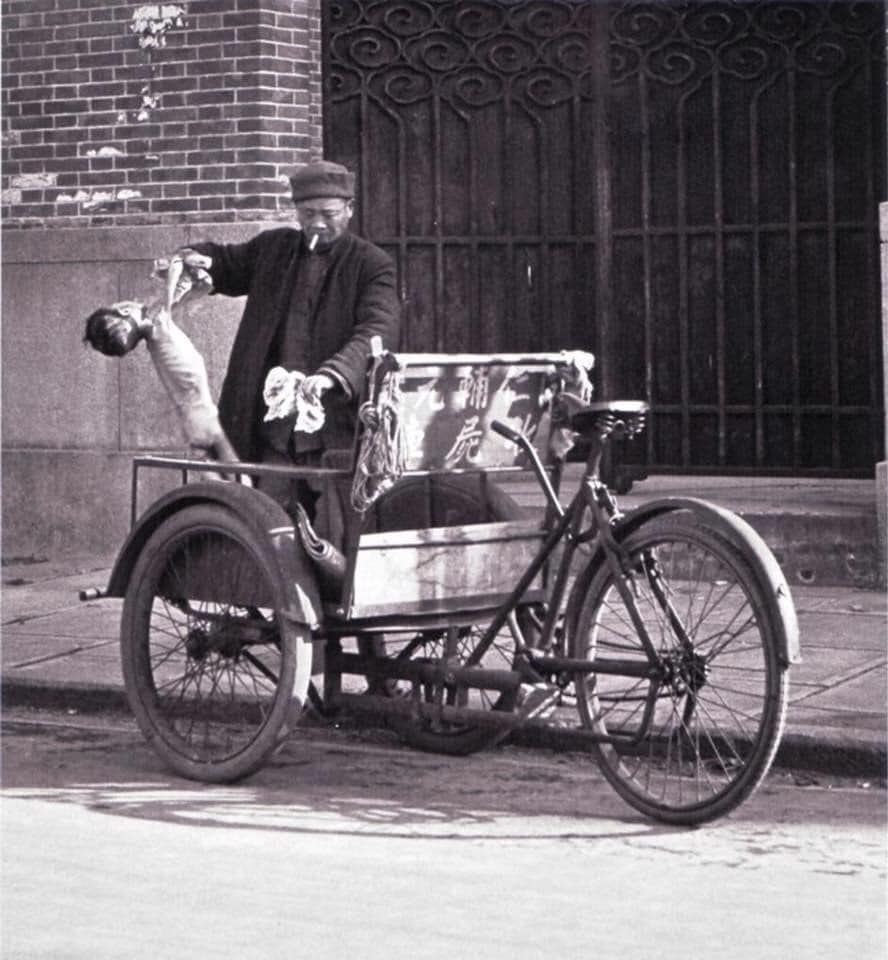 Picking up Chinese children corpses like garbage: emblematic of China's powerlessness in the face of foreign domination.

21SilkRd
June 12, 2020  ·
China’s Century of Humiliation
Anyone who has Chinese blood flowing in their veins will not be left without a heartache after reading about the century of humiliation faced by China. This is a good time to reflect on how knowledge of history can help understand the present.
With a long validated written history that originated in 1600 BC, China has always regarded herself as a proud empire during ancient times. The powerful empire lasted up to the Qing dynasty. Suddenly, the dream ended by the invasion from Britain in 1840. For the first time, this old empire faced the strong military forces made in steel and iron— the First Opium War. No doubt, swords and arrows failed to defend against cannons and guns. The Chinese market was forced to open to occidental products, especially, opium from Britain. Understandably, the Chinese were not happy about addictive and harmful drugs flooding into China. The Qing government tried to ban Opium, but it started to be smuggled in illegally through India. Eventually, the Chinese had enough and they destroyed a bunch of British opium by dumping it into harbours. As a consequence, China was forced to pay 21 million silver taels (a currency and weight unit, 1 tael = 37.301 grammes) as indemnity for the British traders' opium. Yes, China was the invaded nation, but, as a victim, China needed to pay compensation! Then followed the Treaty of Nanking whereby China had no choice but to agree to make Hong Kong Island a colony of Britain.
Greedier aggressors and invaders got attracted by this delicious flesh. From 1856 to 1860 came the Second Opium War. This time, France and the US joined the team of predators. The capital was lost, the glamorous Summer Palace was burned down and the emperor fled. And of course, more treaties were signed (Treaty of Tianjin, Convention of Beijing). Consequences?
More markets opened, 8 million taels (1) of silver were paid to Britain and France, Russia started to seize Chinese territories and the Kowloon peninsula was ceded to Britain.
Even without real conflict, China was forced to sign the Treaty of Aigun and the Treaty of Tarbagatai and a few others with Russia, ceding over 1.5 million square kilometres of land. How large is this? This is approximately equivalent to the sum of all the territories of France (640,679 km2), Germany(357,386 km2), and Spain (505,990 km2).
In 1895, Japan invaded Korea. As China had the duty to protect Korea as a vassal, China and Japan went to war, known as the First Sino-Japanese War or War of Jiawu. Without a doubt, China lost. Nearly the entire navy of China was destroyed, Taiwan was ceded to Japan, 200 million taels of silver as war reparations were paid to Japan—the aggressor nation. Other occidental countries wanted a share. After the War of Jiawu, part of Shandong Peninsula was acquired by Germany, Guangzhouwan by France, New Territories (part of Hong Kong) by Britain. 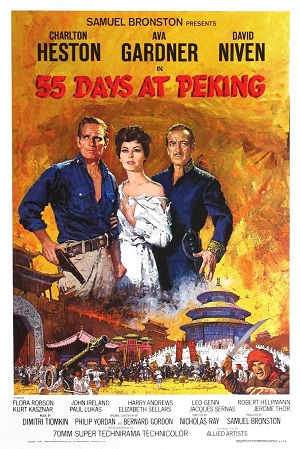 With 55 Days at Peking, Hollywood, as usual, given its longstanding and sickening anglophilia, completely adulterated the history of the Boxer rebellion, making the imperialists into the heroes, and the Chinese patriots into barbaric terrorists.

In 1900, followed by the Boxer Rebellions, the infamous Eight-Nation Alliance invaded China. The Eight-Nation Alliance consisted of Japan, Russia, Britain, France, the United States, Germany, Italy and Austria-Hungary. Yes, if you replace Austria-Hungary by Canada, it makes the G8 countries today. The predators never changed. The outcome was another treaty. Again, an indemnity of 450 million taels of fine silver, around 18,000 tonnes were paid, sovereignty ceded, and the Chinese market opened. China was being colonized. And it was powerless to stop it.
In 1919, the Qing dynasty had fallen after a civil war and had been replaced by the Republic of China. But the miserable story continued even after WWI where China was one of the Allies, the side of winners. In the Treaty of Versailles, the German territories in China were not returned to ROC lawfully. Instead, they were handed to Japan. Then WWII happened, and to the Chinese, it was the second Sino-japanese war. The Japanese invaded China through Manchuria, taking it over and heading southward. It didn’t take the Japanese long to invade China down to Nanjing, the capital at the time. What happened there, and in the rest of China, is called, by some historians, a genocide. China had become a third-world country and a husk of a nation. Chinese people were living as slaves while the most important parts of their country had been taken over.
Another humiliation came at the end of the war. China never got the chance to defeat Japan. America did it. Then another humiliation, China didn’t get the Korean Peninsula back, instead, it got split between the USSR and the USA. Then another humiliation. The UN didn’t let it partition Japan, like the rest of the allies did with the rest of the Axis, instead, it all went to the US. 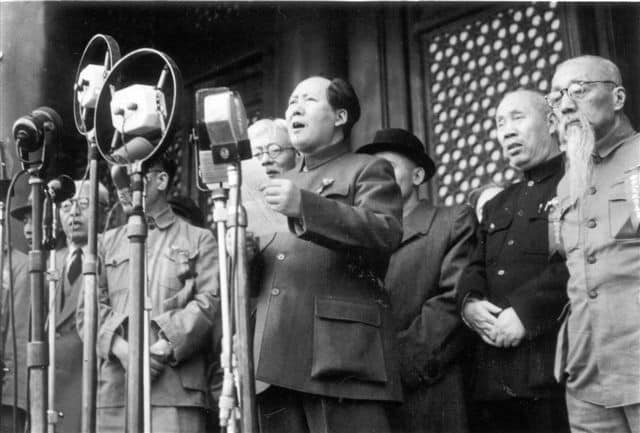 Mao in 1949 proclaiming the birth of the PRC.

The tragedy finally ended a bit after the end of WWII with the foundation of a new China, the PRC in 1949. It is noteworthy that during these four years—1945-1949—China was still in civil war and normal people still led miserable lives. The sacrifices of the Chinese people during WWII came close to the elimination of Chinese civilisation. It was even bloodier and more cruel than all miseries China had previously suffered. After struggling to save the people and nation with uncountable failures, the brave Chinese warriors finally succeeded. After 4 years of fighting, it was over. The [nationalist] republicans had fled, the country was reunified and it was finally over. On October 1st, 1949, Mao gave his famous speech at Tiananmen Square, announcing that the People’s Republic of China had been founded. But China was still a rotten skeleton of a country. The country was still divided and poor and the scars of the century of humiliation were still fresh.
Britain still controlled Hong Kong, Portugal still controlled Macau, and the Nationalists still controlled Taiwan. Under the CCP, China eventually took back Xinjiang and Tibet and got back Macau and Hong Kong. China eventually got rid of the warlords and became united again. Then, in 1997, Hong Kong was returned to China. Then, the oldest, deepest and most noticeable wound from the century of humiliation finally healed. The century of humiliation had officially ended for China in the 40’s, but when Hong Kong was returned, China was reunified. The century of humiliation finally, truly ended. But even as China becomes a world power, the scars are still there. The Koreas are independent nations, Taiwan is controlled by the ROC, Mongolia is a separate country and Hong Kong still has protests. But —overall—they are healed, and the Chinese people don’t really notice them.
Now ... who is talking about China paying compensation again?
(Excerpts from various texts found online, in particular writings of Yiru Zhang, PhD student)
Via Maha Teh

Political activist Rebecca Chan serves as chief administrator for the XI JINPING—CHINA'S EXCEPTIONAL PRESIDENT group page on Facebook.
(1) A tael is a weight used in China and East Asia, of varying amount but fixed in China at 50 grams (1 3/4 oz.). Also, a former Chinese monetary unit based on the value of a tael of standard silver, 100 taels = 15.8 dollars.

And now, the US whines about Chinese unfair trade practices….