Home AFRICA IS THE GUINEAN COUP A PRO-FRENCH POWER GRAB AGAINST A RUSSIAN-FRIENDLY LEADER?

IS THE GUINEAN COUP A PRO-FRENCH POWER GRAB AGAINST A RUSSIAN-FRIENDLY LEADER?

The Guinea coup's paternity is still murky, but Paris's actions may have been coordinated with Washington as part of their push to expel China and Russia from Africa. 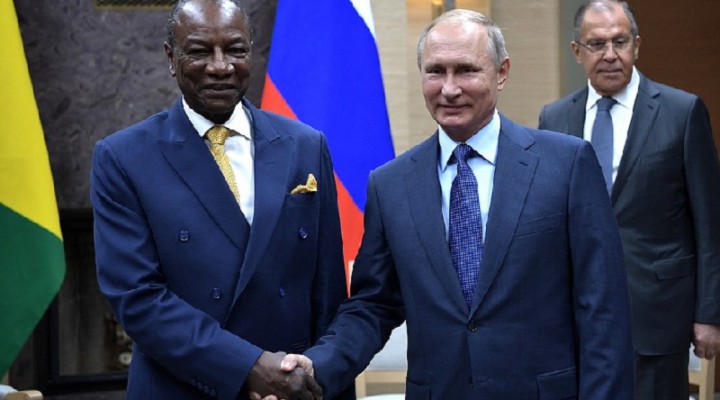 Guinea's leader, Alpha Condé shakes hands with Pres. Putin. Russia has had an important presence in Guinea, which may now be at risk on account of Western maneuvers.

France certainly has a strategic interest in restrengthening Françafrique by having one of the highly trained soldiers that used to work for it carry out a coup against Guinea’s Russian-friendly leader who was already credibly regarded as a regime change target for the past two years due to the media’s smear campaign.

What’s Going On In Guinea?

The West African nation of Guinea experienced a coup over the weekend led by a former French Legionnaire against the country’s Russian-friendly president. Alpha Conde won a third term last year after the constitution was changed to allow this, following in the footsteps of many African leaders. He’s regarded as close to President Putin, whose aluminum champion Rusal – the second-largest such company in the world – owns assets there that account for an estimated 40% of its bauxite production. Guinea used to be a Soviet ally and continued to retain close relations with Moscow after the Old Cold War, most recently expanding them under Conde after he visited Sochi to meet with his Russian counterpart during the 2019 Russia-Africa Summit. As a former French colony, Guinea is considered to fall within the “sphere of influence” that France calls “Françafrique”. The Western European Great Power and the Eurasian one have been vying for influence all across Africa over the past few years after Moscow’s custom-tailored “Democratic Security” (counter-Hybrid Warfare tactics and strategies) model resulted in the Kremlin partnering with many of the continent’s long-serving leaders who fear being deposed by their countries’ former colonial powers. I listed my 18 prior analyses on this topic from 2016 onward in a piece that I published earlier this year about former Russian oligarch Khodorkovsky’s fake news campaign in the Central African Republic that should be reviewed for background. 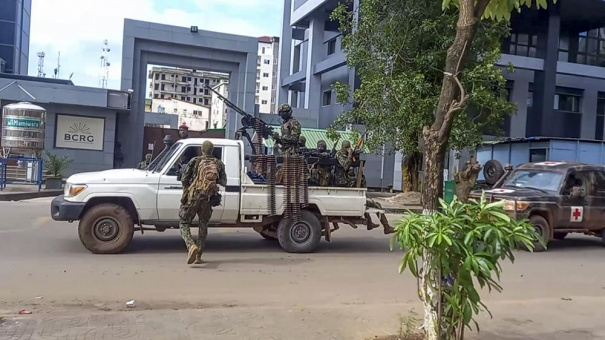 Foreign pressure on Conde first became noticeable in summer 2019 after he began hinting at his intentions to change Guinea’s presidential term limits. The Guardian published a piece that August titled “‘Russians have special status’: politics and mining mix in Guinea”, which spread the innuendo that he was Putin’s puppet. That narrative was partially built upon the then-Russian Ambassador to Guinea’s public support for this scenario prior to him being appointed to head Rusal’s operations in the country later that same year shortly after leaving his diplomatic post. In December 2019, Bloomberg published a hit piece dramatically headlined “How Putin Got a New Best Friend Forever in Africa”, which signaled US media’s support for this anti-Russian infowar campaign.

It deserves mentioning that the Russian-Guinean partnership is about much more than just Moscow’s aluminum interests and Conakry’s “Democratic Security” ones. Russian epidemiological experts helped Guinea defeat its Ebola outbreak from 2013-onward and the country has also purchased Sputnik V to help combat COVID-19. These forms of emergency medical cooperation have directly improved people’s lives and contributed to the country’s overall stability, which in turn bolstered Russia’s soft power among the Guinean people. While there veritably exist some opposition forces who disliked Conde, they still seemed to appreciate the decades-long endurance of the Russian-Guinean partnership and didn’t seem interested in abandoning it.

It’s unclear what the future of their ties will be now that a former French Legionnaire led a successful coup against Conde. The UN, the regional ECOWAS bloc, and Russia all called for his release after the rebels aired footage of him in detention. They promised that he’ll be treated well but nobody can be entirely sure of that. According to their leader, they toppled the former president in order to improve the socio-economic condition in the country. Some reports claim that they were triggered to act after Conde dismissed a senior commander from the special forces. In any case, their leader’s connections with France raise questions about whether Paris might have at the very least given the signal for them to carry out their coup.

Françafrique is more fragile than ever before, after Russia’s “Democratic Security” successes in the Central African Republic, the reported battlefield death of Chad’s long-serving French-allied leader earlier this year, and the coup that shortly thereafter followed in Mali which prompted Paris to reform its regional anti-terrorist campaign that some suspect is being exploited to perpetuate its influence across the Sahel. Viewed from this perspective, France certainly has a strategic interest in restrengthening Françafrique by having one of the highly trained soldiers that used to work for it carry out a coup against Guinea’s Russian-friendly leader who was already credibly regarded as a regime change target for the past two years due to the media’s smear campaign.

Will The Junta Try To Pin The Blame On Putin?

Preexisting political tensions within society weren’t enough to overthrow him through Color Revolution means which is why the traditional African method of a (potentially foreign-backed) military coup might have been resorted to instead. Even if France wasn’t involved, whether directly or indirectly, this outcome still serves its interests. The junta might find it politically convenient to blame Conde’s alleged socio-economic mismanagement of the country on his close partnership with Russia, perhaps claiming that Rusal contributed to the endemic political corruption that supposedly handicapped Guinea’s development. This could help “legitimize” their coup in Western eyes and become the pretext for replacing Russian influence with French.

The worst-case scenario would be if they put pressure on Rusal, which they might try to internationally justify if Khodorkovsky’s Western-backed so-called “investigative network” or other foreign-supported ones invent stories about its purported corruption in the country. The purpose in doing so would be for the junta’s possible foreign backers (most likely France if this is truly the case) to punish Russia for what the Mainstream Media has spent the past two years claiming was its support for Conde personally even though Moscow always regarded bilateral ties as being between their two nations and not dependent on any particular leaders. Any disruption of Rusal’s activities in Guinea, which account for around 40% of its bauxite, could be disastrous for it.

Seeing as how strategically important the company is for Russia, such a scenario could rightly be regarded as a Hybrid War attack against the Kremlin itself. Whether it succeeds or not, it would still be highly symbolic of the efforts being undertaken to reverse Russia’s recent successes in Africa, especially in a way that might directly affect the Kremlin’s coffers as well as the global position of its national champions. Observers should therefore continue monitoring events in the West African nation in order to see whether the junta will behave pragmatically by retaining Conakry’s mutually beneficial ties with Moscow or if it’ll commence a geostrategic pivot by replacing Russian influence with French and thus return Guinea back into the fold of Françafrique.

ANDREW KORYBKO—The author is a Moscow-based American political analyst. His articles are widely published in anti-imperialist and alternative media. He maintains a blog at oneworld.press.

Back to the future: Talibanistan, Year 2000

Regis Tremblay sums up the Ukrainian War, from...

Essential Truths with Jimmy Dore: US...