The US illegal occupation of Syria continues. Add your signature to this statement demanding respect for Syrian sovereignty.

September 8, 2021
Our articles depend on you for their effectiveness. Share with kin, coworkers and friends.

[su_panel background="#e8eaed" border="1px solid #4c3a3a" shadow="3px 1px 2px #eeeeee" radius="3" text_align="center"]Pro-Western Syrian exiles have initiated a statement supported by a number of “progressive” individuals and organizations.  The statement is titled,“Erasing people through disinformation: Syria and the ‘anti-imperialism’ of fools”.  In this statement, which supports the goal of the US and its allies of regime change in Syria, the authors attack those who have consistently supported an end to intervention in Syria by the US, NATO, Israel and other repressive states in the Middle East.  Their statement was signed by a number of people in the US and around the world.  UNAC was one of the groups that this statement criticized.  The war on Syria has been an especially divisive issue for the peace movement, so, we and others have put out the statement below explaining our position.  If you agree with this statement, we ask that you sign as an individual or an organization by clicking the link below.[/su_panel] 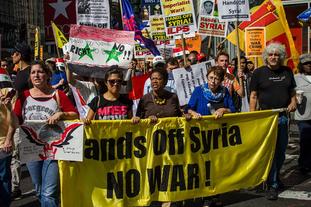 As the Biden Administration took office in the US, one of their first actions was to increase US troop levels in the northeastern region of Syria currently occupied by the United States and its proxies. Shortly thereafter, the United States bombed a Syrian town on the eastern border killing as many as 30 Syrians, purportedly to target hostile “Iraqi militiamen” or to “send a message” to Iran.  US proxies are selling Syrian grain in Turkey and a US-based corporation now operates a refinery in the Syrian territory occupied by US troops and proxies.

Last year, Congress passed the Caesar Sanctions as an amendment to the massive Defense Appropriations Bill. These sanctions cause the Syrian people to go without the basic necessities such as food, energy and medicine. They have destroyed the Syrian currency and are literally causing starvation.  At this time, it is impossible, even for the United Nations, to bring aid into Syria.

Moreover, these sanctions block reconstruction and the return of hundreds of thousands of refugees from impoverished camps in surrounding states. Syrians can’t return if there is no potable water, food or housing for their families. Meanwhile, the only Syrians who can receive international aid are those in US-occupied territories and those in areas controlled by the US ally, Al Nusra/Al Qaeda.

There has been a recent swell of anti-Syria propaganda, supported by prominent activists on the “left.”  This has included attacks on the majority of the US antiwar movement, which has focused on opposing US and outside aggression against Syria, and which supports the right of Syria to defend its national sovereignty against this outside aggression.   The clear fact is that the US government, along with its allies in NATO, Israel, [Turkey] and other reactionary Middle Eastern states is the primary cause of the current devastation of the Syrian people. The US and its allies have facilitated the entry into Syria of tens of thousands of foreign fighters (brutal takfiris and outright mercenaries) to support their regime change agenda.

As with the lies about Weapons of Mass destruction that led to the US invasion and occupation of Iraq, the US and its allies have put forth accusations about Syria using chemical weapons and terror against its own people, which have now been totally discredited and disproven.