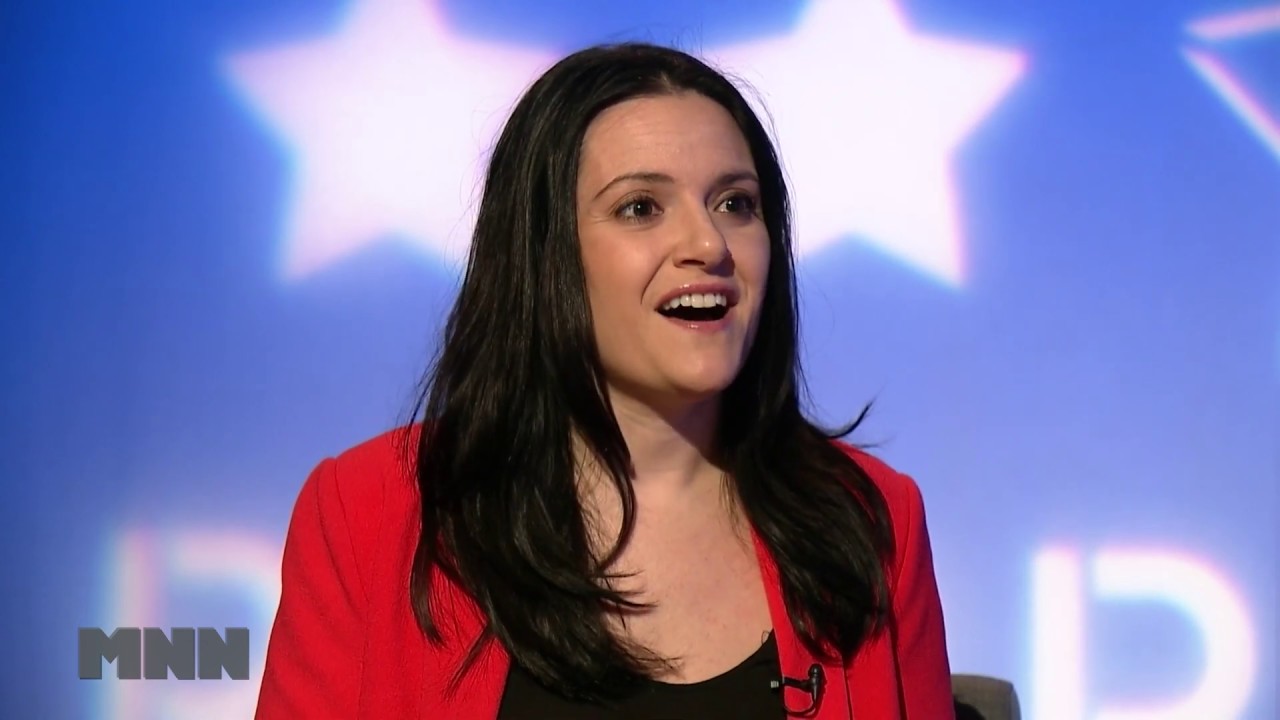 Konst: the arrogant semi-smart leftist can be just as bad for political progress as the mean-spirited rightwinger. 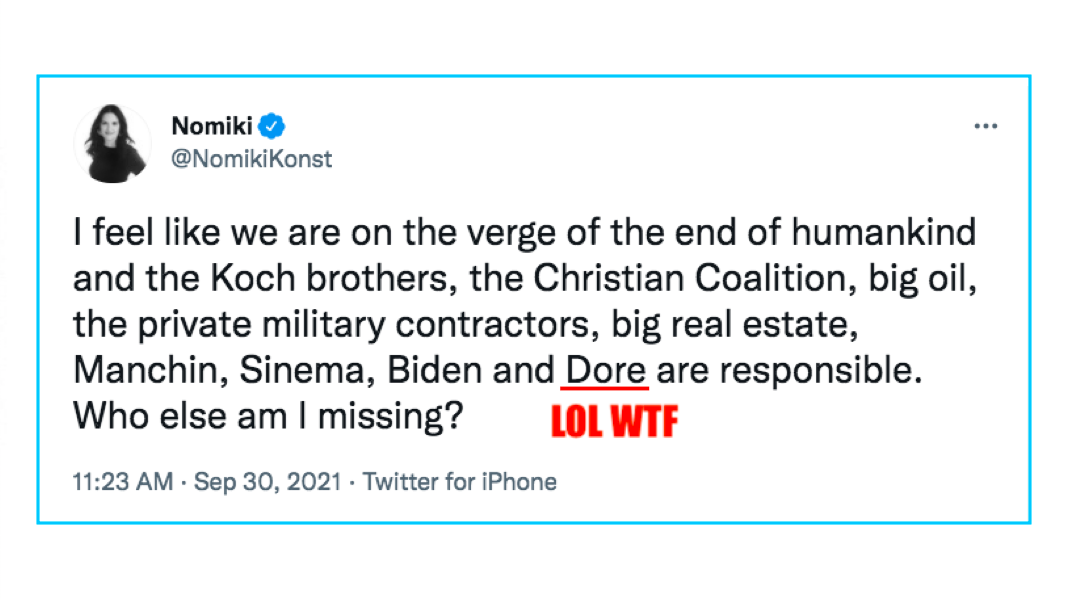 Progressive commentator and journalist Nomiki Konst has a tweet out that honestly needs its own article to unpack, not because of its own intrinsic insanity but because of what it says about what’s happening to left-wing punditry and the western left in general.

“I feel like we are on the verge of the end of humankind and the Koch brothers, the Christian Coalition, big oil, the private military contractors, big real estate, Manchin, Sinema, Biden and Dore are responsible. Who else am I missing?”

One of these things is not like the others.

This was not a joke, nor was it some ill-considered tweet made in a drunken haze or momentary lapse in judgement and quickly regretted. Hours later Konst was adamantly arguing with people who criticized the inclusion of Dore in her Horsemen of the Apocalypse.

“Ah yes it’s not like media is powerful or it’s not like the far right hasn’t used comedians to gain power globally,” Konst told one such critic.

“Have you looked at the far right wing Comediens who built movements globally and got into government lately? Off of splitting the left? You think media isn’t powerful? Mmkay,” she told another.

“The dude sucks up oxygen and splits the left,” she told another.

To be clear, Konst is referring to a moderately popular podcaster whose YouTube channel has under nine hundred thousand subscribers. Relatively few people outside of extremely online Americans on the political left know who he is, and she’s talking about him like he’s some kind of powerful “media” mogul like Rupert Murdoch (who did not make the Horsemen of the Apocalypse list).

I feel like we are on the verge of the end of humankind and the Koch brothers, the Christian Coalition, big oil, the private military contractors, big real estate, Manchin, Sinema, Biden and Dore are responsible. Who else am I missing?

The absolute bat shit hysteria that has consumed progressive punditry about Jimmy Dore hit what looked like fever pitch intensity some three months ago when Dore stepped forward to defend journalist Aaron Maté from despicable McCarthyite claims by The Young Turks that he is paid by dictators and works for the Kremlin, causing an absolutely freakish meltdown which got so insane that even Glenn Greenwald did a full segment on it.

And yet, somehow, it keeps getting crazier.

While there is no level of manipulativeness I would put past a TYT alum like Konst, I don’t actually think she was being manipulative in her inclusion of Dore in the world’s deadliest power structures. I think Dore actually consumes that much oxygen in her mind, and her obsessive hatred is validated so thoroughly and continuously by her peers in progressive US punditry, that she actually does see him as a central gargantuan figure in the global power dynamics that are leading human civilization to its collapse.

To understand my point, I need you to watch this three-minute video clip made earlier this year by Matt Orfalea featuring Majority Report’s Sam Seder continuously uttering Dore’s name in discussions with his associates (including Konst) instead of actually talking about the powerful people who are destroying our world:

This is pure madness. If you sincerely believe as I do that our species is being driven to its doom by ecocidal capitalism and omnicidal imperialism and that this is the single most important subject in the world, then there is no legitimate reason for you to be spending this period in history obsessing over a comedian making YouTube videos in his garage. How is this not completely obvious to everyone?

Everybody’s got their opinions about Dore; he’s loud and blunt and unapologetically goes against the grain of the leftist commentariat whenever he feels like it, and that will lead to people having strong opinions about you (I personally love that shit). But this inability to set disagreements with Jimmy Dore aside as a distant background issue in the face of humanity’s current plight is entirely because garden variety egotism has caused these people to lose sight of what made them care about leftist causes in the first place.

And really this isn’t about Dore, and it isn’t about Konst. It’s about the tremendous amount of success the powerful have had in manipulating, sabotaging, undermining, fragmenting and diverting the left in the Global North to keep us all turning the gears of capitalism and empire for their benefit. We’ve been so effectively neutered and nullified and our movements so removed from real-world consequence that our “leftism” is increasingly relegated to online influence, giving rise to the false impression that some lefty podcaster acting naughty is the most significant matter on the table.

Replacing capitalism and imperialism with equality, justice, peace and harmony is what our world needs if our species is to survive into the future, but the agenda to make that transition sets us directly at odds with the largest power structures in the history of civilization. For this reason there’s been a generations-long campaign of psyops, infiltration and propaganda to keep the left down which surely continues to this day in online circles, but even if it didn’t the chaos, paranoia and confusion created on the left over the years by programs like COINTELPRO would be enough to significantly hinder our efforts to organize and overturn the status quo.

Something big is going to have to change if we’re going to win this thing, and that change isn’t going to come from the powerful. It’s going to have to come from within us. Not until we as a collective have enough inner clarity not to get bogged down by ego and manipulation will we be able to stand up to our oppressors at our full height and shrug off the shackles they have placed on us.