Disintegrating empires can flail about most dangerously

October 3, 2021 9 minutes read
Our articles depend on you for their effectiveness. Share with kin, coworkers and friends. 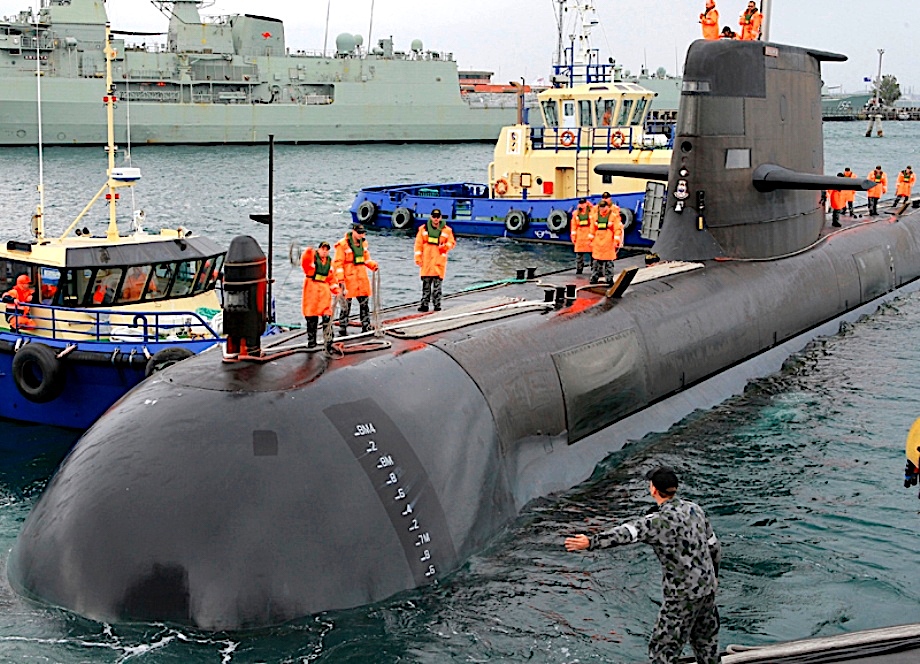 The Australian sub Dechaineaux returns to home port in Western Australia. Perth in Australia will be a forward base for nuclear-powered and nuclear weapon-carrying American subs.

by Pepe Escobar – posted with the author’s permission and cross-posted widely.

Pax Americana was always a minor character in a zombie apocalypse flick.

Pax Americana is actually The Eternal Return of the Living Dead. “Pax” was never in order; War Inc. rules. The end of WWII led directly to the Cold War. The unipolar moment was an arc from the First Gulf War to the bombing of Yugoslavia. 9/11 launched the Global War on Terror (GWOT), renamed Overseas Contingency Operations (OCO) by Team Obama. We are now entering Cold War 2.0 against China.

What former CIA analyst Ray McGovern memorably describes as the MICIMATT (military-industrial-congressional-intelligence-media-academia-think tank complex) never did “Pax”. They do War, in unison, like The Knights Who Say “Ni!” – minus the comic flair.

Take this Knight for the Council on Foreign Relations (CFR), the heart of the establishment matrix. CFR specializes in Kissingerian Divide and Rule. Now that applies, in spades, to the Russia-China strategic partnership.

Knights overwhelmingly state the obvious: “Chinese power must be contained”. They sell the current, serial imperial debacle as “grand strategic moves”, in a quirky, lost in translation mixed salad of Gramsci and Lampedusa: a “new order” (engineered by the Empire) is being born via “everything must change so everything may remain the same” – privileging the Empire.

Other Knights even propose the ludicrous notion that the current POTUS, an actual zombie remote-controlled by a teleprompter, is capable of conceiving a “foreign policy for the middle class” , as if the MICIMATT would ever approve a scheme to “advance prosperity in the free world as a whole”. The “free world” has just been stunned by the “prosperity” offered to Afghanistan during 20 “bombing to democracy” years.

And then there are British Knights, who at least should have known their Monty Python by heart, carping about illiberalism and the “regimes created by Xi and Putin” , which will “crumble” and be succeeded by “anarchy and new despotisms.” Same old Anglo haughtiness mixed with piercing ignorance. Oh, those Asiatic “tyrannies” threatening the White Man’s civilizational drive.

We all live in an Aussie submarine

Now it’s all about AUKUS – actually U SUK A. Until recently, only the P5 – the five permanent UNSC members – possessed nuclear-powered submarines. India joined the club, and later rather than sooner, Australia.

Every major player knows the next American war will not be about remote Pacific islands. Taiwan, though, is a completely different ball game. U SUK A is mostly about Taiwan.

U SUK A was finalized at the G7 summit in Carbis Bay last June. That was an Anglo Boys Club affair, discussed exclusively by the Biden-BoJo-Morrison troika – and duly excluding Japan, even as Tokyo all but drew a samurai sword yelling its intent of supporting Taiwan.

The problem is there have been no leaks of the fine print contained in U SUK A. Only spin. Yet it’s already clear that U SUK A goes way beyond building Aussie nuclear subs. Canberra will also have access to Tomahawks, Hornets and even become part of American hypersonic missile research.

But then, in a slip, Australian Defense Minister Peter Dutton gave away the game: U SUK A will allow the upgrading of “the infrastructure in Perth, that will be necessary for the operation of these submarines. I expect we will see…lease arrangements or greater joint operations between our navies in the future.”

Translation: Perth will be a forward base for nuclear-powered and nuclear weapon-carrying American subs.

Why U SUK A now? Let’s go back to WWII – and the same old cartoonish geopolitics of benign Anglo maritime island powers pitted against the “evil” Eurasian heartland.

Those with technical knowledge across the Beltway – not, not the Knights – are aware the US is not a match for hypersonic Russia. Yet the Americans believe they can make life unbearable for Beijing. The US establishment will allow China to control the Western Pacific over their dead bodies. Enter the instrumentalization of Australia.

A big question is what will be the new role of the Five Eyes. With U SUK A, the Anglo Club has already stepped beyond mere intel sharing and spying on communications. This is a military pact between Three Eyes.

Depending on the composition of its new government, Germany could become a Sixth Eye – yet in a subordinate role. With U SUK A, NATO as a whole, fresh from its spectacular Afghan debacle, becomes little else than a semi-relevant vassal. This is all about maritime power.

U SUK A in effect is a Quad Plus, with India and Japan, the Fifth Columnist Asians, only allowed to play the role of, once again, mere vassals.

Not surprisingly, the first, concise technical and strategic assessment of U SUK A is Russian, written by Alexander Timokhin and published in Vzglyad, closely linked to GRU intelligence. Here, provided by John Helmer, is an essential English translation.

– the extra subs will create a serious, additional threat; “the problem of combating enemy submarine forces will become quite acute for China.”

– Geographically, “Australia can completely block the connection between China and the Indian Ocean.”

– Australia will meet the deadlines only if it lays “more submarines a year than the Americans.”

– It is “possible to quickly make Australia a country with a submarine fleet.” These “gigantic investments and sharp political turns are not carried out just like that. The hegemony of the Anglo-Saxons in the world is seriously shaken.”

And that brings us to the inevitable conclusion: “It is worth recognizing that the world is on the verge of war.”

Even before the Vzglyad strategic assessment, I had submitted the ravings of yet another Beltway Knight – widely praised as a sage – to an old school, dissident Deep State intel analyst. His assessment was merciless.

He wrote me, “the geopolitical logic is that the China-Russia alliance was determined to be against US interests, much as the Mao-Stalin alliance. SEATO and NATO are being replicated. The treaty between England, Australia and the US is part of the Pacific rebalancing, or a new SEATO. NATO is part of the offset against Russia-China in Europe.”

On what might lie ahead, he noted that “the coup against the US, Australia, England and NATO would be a French-Russian alliance to break up NATO and isolate Germany. Russia has unsuccessfully approached Germany, and now may approach France. The loss of France would effectively end NATO.”

He sees U SUK A all dressed up with nowhere to go: “As it stands now, China is in command of the Pacific and Australia and Britain mean nothing. Russia can overrun NATO in two weeks, our adversaries’ hypersonic missiles can destroy all NATO airfields within five to ten minutes and the battle for Europe would be over.”

He’s adamant that “the US cannot project power into the Pacific. Chinese submarine missiles would finish off the US fleet in short order. The Australian submarine issue is really irrelevant; if the CIA had an organization that was worth anything they would know that our adversaries already can spot and destroy our nuclear submarines without the slightest difficulty. The entire US Navy is obsolete and defenseless against Russian missiles.”

And it gets worse – at least for the cheerleading Knights: “The F-35 is obsolete. The Air Force is largely worthless, as Russian and Chinese missiles can finish off their airfields or aircraft carriers in short order. The woke US Army is more worthless than the French Army with their Maginot Line. The Joint Chiefs of Staff are paid less than 200k a year, and are second or third rate talent. The US is a sinking ship.”

Assuming that’s really the case, the – nuclear – war against China in the Western Pacific, projected in the Beltway to happen in the second half of the 2030s, would be over even before it started. Taiwan may even be part of China by then – an offshoot of Beijing always proposing economic exchanges to all, while Washington always “proposes” war.

One thing though will never change: The Knights Who Say “Ni!” singin’ the praise of Pax Americana to the utter indifference of the unruly plebs.