The Russians are openly expressing their absolute amazement at the utter stupidity of the West.  Three examples:

A recent article by Medvedev:

Putin’s speech at the recent energy forum in Russia:

and then there is this photo of Putin tapping his forehead in the sign “have you gone totally insane?” 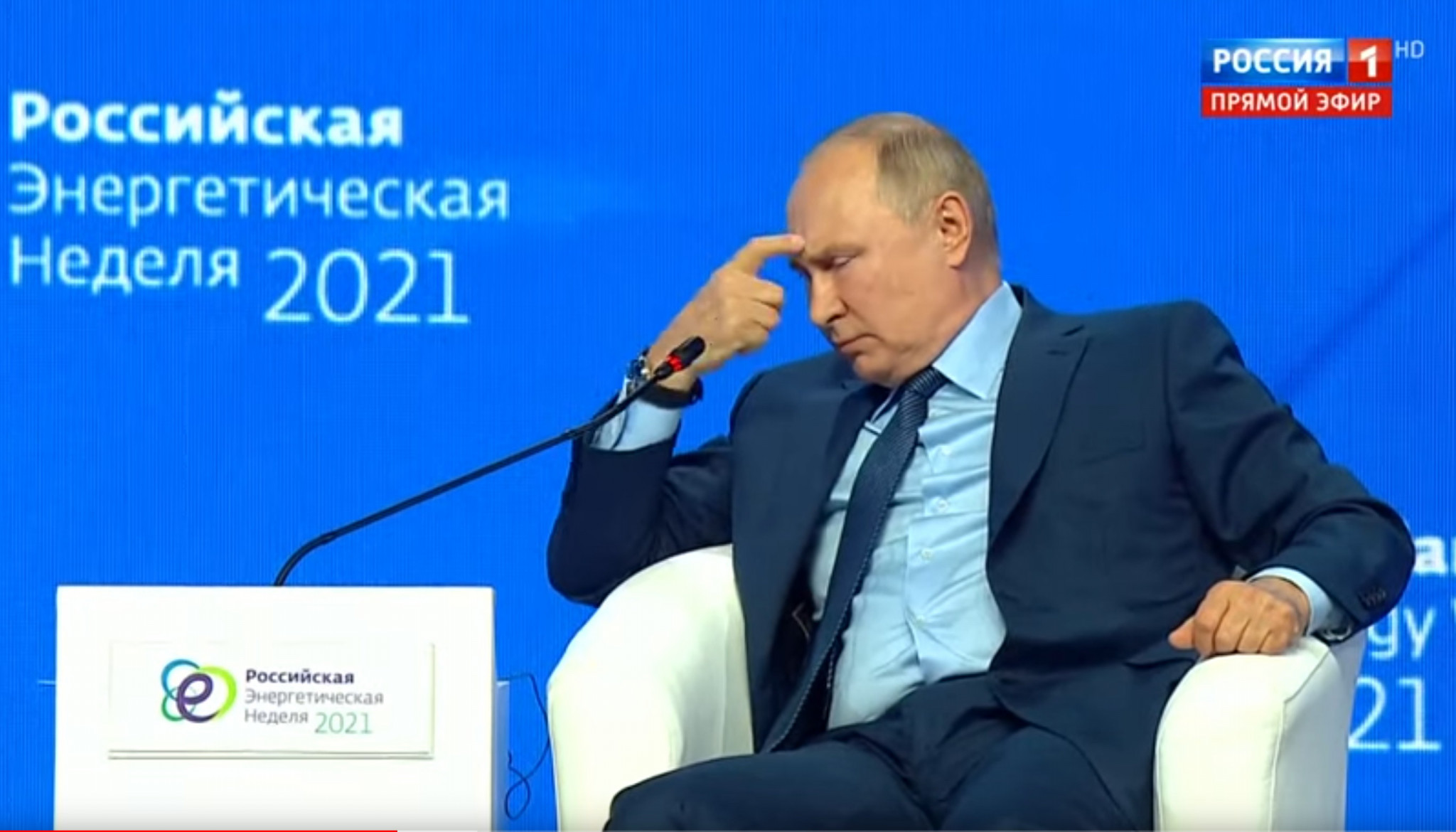 Shall I even bother to list what caused such reactions?

The self-imposed energy crisis in which the EU is BOTH trying to delay/stop NS2 while AT THE SAME TIME demanding that Russia increase her energy output?

As for the Ukrainians, Putin just offered them, again, not for $1500/cubic meters but for $175.  But this US vassal state proudly rejects any such offers.

The fact that Uncle Shmuel promised his “molecules of freedom” to the EU but is now selling these molecules to Asia (which has the means to pay much more). Yet the EU remains as subservient to the USA as ever…

Or the fact that the entire, united, consolidated western media accuses Russia of creating the energy crisis while, in reality, not only did Russia fulfill all her contractual obligations but even INCREASED (by 10% if I remember correctly) her sales above her contractual obligations?  Putin repeated many times “tell us what you need, give us a contract to sign and we will deliver whatever you need!”

Then the there's Victoria “fuck the EU” Nuland who, apparently, demanded that the Russians unilaterally lift Russian counter-sanctions while the US would not.

Here is how the western elites seem to be “thinking” (I am being generous here).

I will stop here, but I want to stress what Putin and plenty of Russian analysts are saying: the consolidated West is so totally out of touch with reality that it is, in essence, committing suicide.  Putin and others have also said the following many times already: “we don’t need to do anything, nothing, just watch how the West self-destructs“.

About Ukraine: please read Medvedev’s article carefully.  Some say that it was not written by him, but by Putin.  The most likely explanation is that this text was prepared, vetted and approved by the Security Council of the Russian Federation (where Medvedev holds the position of Deputy Chairman) and that the reason why Medvedev signed it was diplomacy: he could be much more direct than President Putin, but you can be sure that this article does express Putin’s point of view.

The Russians are now openly calling Ukraine a vassal state of the USA and say that it makes no sense to talk to the Ukies, only to their masters, hence the visit of Nuland to Russia.

The Russians are not (yet?) officially openly calling the entire EU a vassal state of the USA, but they are strongly suggesting it.

So from the Russian point of view, only the USA retains at least some agency and is, therefore, worth talking to.

What’s left is a deeply dysfunctional society where the ruling elites seem to care only about gender fluidity and tranny rights, body positivity,  Woke ideology, “inclusive mathematics” and even a homosexual Superman (which ought to then be renamed “superperson” I suppose!).  Still, the Russians will talk to this wannabe Wakanda entity, if only because the latter still has nukes (and quite a lot of momentum left, even dead), but they don’t feel ANY need to take it very seriously or do much about it.

As I have written many times before, Russia’s future is not in the West, but in the South (Central Asia, Middle-East), East (China) and the North (Arctic).

As for the insane asylum called “Europe”, the Russians will let “general Winter” deal with them and try to bring them from “their multicultural lala land” and the worship of Greta Thunberg back to reality.

I will end with a personal anecdote.  While studying at the School of International Service (SIS) at the American University I had an absolutely fantastic teacher, a former Naval intel guy of Polish origin.  His lessons were absolutely superb, every time.  One day, we did something really interesting (and fun!): for half of the class we read letters of WWII German officers serving on the Eastern Front in the early phases of the invasion: they were full of the usual stuff about Russian subhumans getting their asses kicked by the “culture-carrying master race” (Kulturträger Herrenvolk).  In the second half of the class, we also read letter written by German officers, but after Stalingrad in which they were actually calling Russian quasi-superhumans.  The contrast was absolutely amazing.

Nothing sobers up somebody drunk on ideology as a brutal confrontation with a reality that cannot be denied.

The same happened to the French, by the way.  The Russian word shval’ (шваль) roughly means scum/trash/worthless comes from the French word “cheval”, meaning horse.  Can you guess why?  Because the retreating French had to use their dead horses for food!  For details, I HIGHLY recommend this book “Les Cahiers du capitaine Coignet” – these are the diary notes of Jean-Roch Coignet, who participated in all the Napoleonic wars.  It is a fascinating read and an eye opener on how a French solider lived through all these years.

I can just imagine how the current mass insanity in the West will go down in history books.  Maybe as the dumbest and most incredible self-destruction in history?

The Saker is the founding (and current executive) editor of the multinational network of sites of the same name dedicated to strategic analyses, especially as it relates to the struggle between the Western Empire and sovereign nations that refuse to obey its diktats.