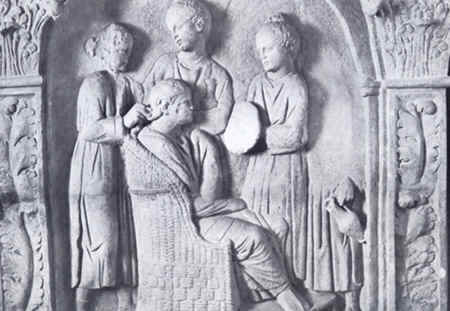 Another unassuming, direct chat by the Finnish Bolshevik on topics that most people are unaware of, or fail to understand.

TheFinnishBolshevik
Each episode of the series will discuss one important topic of Marxist political economy. This video discusses the first class society: and the slave mode of production.
The video covers the following topics: -Rise of slavery -Rise of the state (and armies) -Rise of classes (slaves vs owners + peasants, handicraftsmen, lumpen) -Separation of cities and countryside -Division of labor: --Separation of handicraft from agriculture --Separation of banking and merchants from producers -Rise of science, philosophy etc. -Fall of the slave-owning mode of production
The textbook https://www.marxists.org/subject/econ... https://revolutionarydemocracy.org/ar... Other episodes: Communism For Beginners - Basics of ML playlist. https://www.youtube.com/playlist?list... Audiobook of "The Origin of the Family, Private Property and the State" by Engels https://www.youtube.com/watch?v=8W2Ga...

In his Institutiones (161 AD), the Roman jurist Gaius wrote that:

[Slavery is] the state that is recognized by the ius gentium in which someone is subject to the dominion of another person contrary to nature.

The 1st century BC Greek historian Dionysius of Halicarnassus indicates that the Roman institution of slavery began with the legendary founder Romulus giving Roman fathers the right to sell their own children into slavery, and kept growing with the expansion of the Roman state. Slave ownership was most widespread throughout the Roman citizenry from the Second Punic War (218–201 BC) to the 4th century AD. The Greek geographer Strabo (1st century AD) records how an enormous slave trade resulted from the collapse of the Seleucid Empire (100–63 BC).[3]

The Twelve Tables, Rome's oldest legal code, has brief references to slavery, indicating that the institution was of long-standing. In the tripartite division of law by the jurist Ulpian (2nd century AD), slavery was an aspect of the ius gentium, the customary international law held in common among all peoples (gentes). The "law of nations" was neither considered natural law, thought to exist in nature and govern animals as well as humans, nor civil law, belonging to the emerging bodies of laws specific to a people in Western societies.[4] All human beings are born free (liberi) under natural law, but slavery was held to be a practice common to all nations, who might then have specific civil laws pertaining to slaves.[4] In ancient warfare, the victor had the right under the ius gentium to enslave a defeated population; however, if a settlement had been reached through diplomatic negotiations or formal surrender, the people were by custom to be spared violence and enslavement. The ius gentium was not a legal code,[5] and any force it had depended on "reasoned compliance with standards of international conduct".[6]

The Roman Empire was hugely dependent on forced labour. It was a key foundation on which Rome’s power, wealth and influence was built. A great many slaves were set to work in menial and manual jobs – including agriculture, mining and construction. As historian Philip Matyszak explains, these types of jobs could be particularly brutal. “Being sent to the mines was a drawn-out death sentence,” he says “They worked in very dangerous, very unhealthy conditions lit by oil lamps, constantly breathing in fumes. They worked in a state of acute misery.” Unfortunately, those working above ground in agriculture fared little better. “They were treated by the farmers as part of the livestock; offered as much compassion as was given to the cattle, the sheep and the goats.” (SLAVERY IN ANCIENT ROME, WORDS: NIGE TASSELL)

AT THE END OF THE DAY, SLAVERY, THOUGH PROBABLY AN ALMOST INEVITABLE PHASE IN THE DEVELOPMENT OF HUMAN SOCIETY, IS A SYSTEM OF INSTITUTIONALISED VIOLENCE AND TERROR.