WHENCE THE POPPIES OF REMEMBRANCE DAY?

The brutal lessons of the Great War have not been learned by those who precipitated it a century ago. Nor by a massively propagandised public.

November 10, 2021
Our articles depend on you for their effectiveness. Share with kin, coworkers and friends. 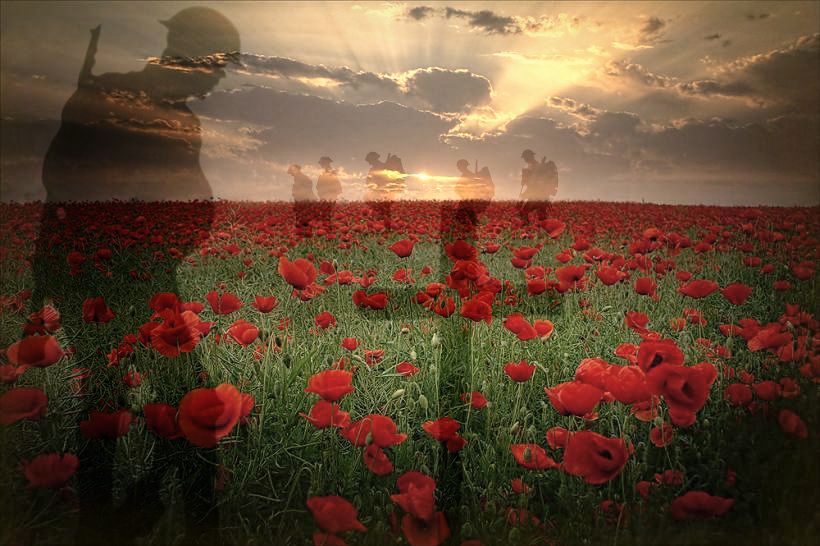 The enthusiasm for war in the summer of 1914 was never as great or as widespread as we have been conditioned to believe. By early 1915, after six months of massacres and with no end in sight, the soldiers and civilians of all the belligerent countries were disillusioned and disgusted, and this alarmed the authorities. In Britain, and throughout the British Empire, the widespread war weariness manifested itself in a drastic reduction of the number of men who volunteered to join the army, and the government was forced to consider introducing compulsory military service, a measure that might trigger opposition, resistance, possible even unrest, and even worse.

The fact that the enthusiasm for the war had virtually gone up in smoke, was reflected in 1915 by the success of a pacifist song born in the United States, then still a neutral country, which became an immediate hit in Britain. Its title said it all: I Didn’t Raise My Boy to Be a Soldier.

Ten million soldiers to the war have gone,
Who may never return again.
Ten million mothers’ hearts must break
For the ones who died in vain.
Head bowed down in sorrow
In her lonely years,
I heard a mother murmur thro’ her tears:
« I didn’t raise my boy to be a soldier,
I brought him up to be my pride and joy,
Who dares to place a musket on his shoulder,
To shoot some other mother’s darling boy?
Let nations arbitrate their future troubles,
It’s time to lay the sword and gun away,
There’d be no war today,
If mother’s all would say,
“I didn’t raise my boy to be a soldier.”

Indeed, in 1915, leading personalities in all belligerent as well as many neutral countries began to argue in favour of ending the war by means of negotiations. However, both sides stuck stubbornly — and literally — to their guns. It is remarkable also that the song mentions ten million mothers whose “hearts must break”: the Great War would indeed cause the death of approximately ten million soldiers.

The popularity of this song was a matter of grave concern for Britain ‘s political and military leaders. They wanted at all costs to fight on to a victory they had expected before Christmas 1914. Even more disturbing for these gentlemen was an echo that reached them from the front in France and Belgium, where the murderous battles of the war’s early stages had given way to an equally deadly trench warfare. The ordinary British soldiers as well as their comrades from the other countries of the Empire had produced, and popularized, a song with a title that expressed their war weariness: “I want to go Home”:

The British authorities would undoubtedly have preferred more patriotic and warlike songs to be cranked out by their cannon fodder.

It was in this context that on May 3, 1915, an officer came to the rescue. in the vicinity of Ypres, a town right on the front line in Flanders, John McCrae a lieutenant-colonel in the Canadian army, known as a keen supporter of the British Empire and of the war, wrote a poem in which he urged the men to carry on with their task despite all the hardship. This composition, entitled “In Flanders’ Fields,” was predestined to become famous all over the world, presumably on account of its potent description of poppies floating in a sea of crosses marking the tombs of the dead, and also of larks singing, high above the heads of the trench-bound combatants, in spite of the rumble of the guns:

In Flanders fields the poppies blow
Between the crosses, row on row,
That mark our place; and in the sky
The larks, still bravely singing, fly
Scarce heard amid the guns below.

We are the Dead. Short days ago
We lived, felt dawn, saw sunset glow,
Loved and were loved, and now we lie,
In Flanders fields.
Take up our quarrel with the foe:
To you from failing hands we throw
The torch; be yours to hold it high.
If ye break faith with us who die,
We shall not sleep, though poppies grow
In Flanders fields.

In his brilliant book on the Great War, the American historian Paul Fussell has critically dissected this poem. He denounces it as an almost “vicious and stupid” but particularly powerful and effective literary instrument of war propaganda, of what the French called jusqu’au boutisme, “fighting until the [triumphant] end,” in which the line “take up our quarrel with the foe” naturally jumps to the fore.

The poem was indeed potent and effective, because it evoked images the denizens of the trenches were familiar with and found appealing, such as they sky stretching high above their heads, the dawn and sunset they observed keenly every single day, the mesmerizing larks, untouchable high in the sky, the blissful “mock-death” (Fussell) of the sleep they cherished so much – and the red poppies, traditionally associated not only with sleep, dreams, and oblivion, but also with love, blood, and martyrdom. 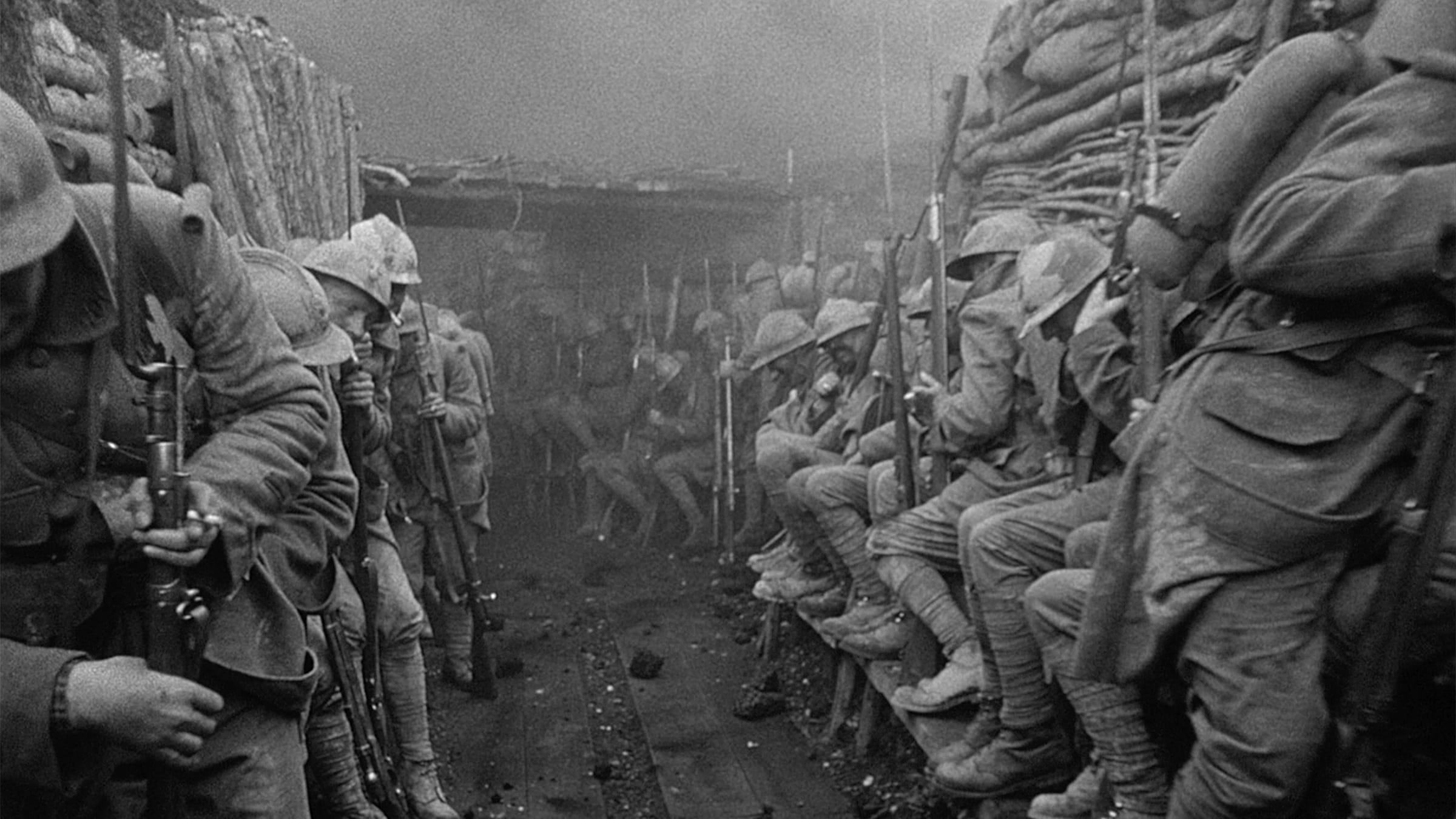 The Great War in the trenches. (Still from Paths of Glory, 1957, S. Kubrick, director)

To the British soldier and poet Isaac Rosenberg too, the poppies were a strong symbol in the sense of blood and sacrifice; in his poem “Break of Day in the Trenches”, he wrote that “the roots” of the poppies “are in man’s veins.”
It was not a coincidence that poppies flowered abundantly in Flanders’ Fields in the spring of 1915. Normally, the minuscule seeds of this flower penetrate deep into the earth to wait there, sometimes for years, for the soil to be upturned for some reason, and thus exposed to the sunlight and warmth they suddenly germinate. With the digging of miles of trenches and the explosion of tens if not hundreds of thousands of shells starting in the fall of 1914, the conditions were created for an unprecedented burgeoning of poppies the following spring in that corner of Belgium, of course most spectacularly so in the immediate vicinity of the trenches and in the pockmarked no-man’s land.

With its poppies, McCrae’s poem thus certainly catered to the sensibilities of the Canadian and British soldiers. Even more effective as a tool of motivation was the fact that the poem loomed like an appeal emanating from the fallen comrades, rather than from officialdom, including officers like McCrae himself. It insinuated in a particularly subtle way that not to persevere in “our [sic] quarrel with the foe” would have amounted to a kind of treason, a gross shattering of the chain of solidarity that bound the men together – the living as well as the dead! Not “holding high the torch” thus became unthinkable, as it would have meant betraying the dead comrades. Such disloyalty would have prevented the latter from finding rest in an eternal sleep, even though they were cradled by a lovely landscape bursting with soporific blossoms:

If ye break faith with us who die,
We shall not sleep, though poppies grow
In Flanders fields.

Such a jusqu’au-boutiste poem could hardly fail to find favour with military and political authorities keen to find ways to motivate the men, with the media, and thus with the public. McCrae received heaps of letters and telegrams congratulating and praising him. In | 3 Flanders’ Fields was published on December 6, 1915 in the satirical but nationalist British magazine Punch and thus embarked on a career as one of the most celebrated and cited literary products of the Great War. The reason was not its literary merits, nor was it because ordinary soldiers liked it, which does not seem to have been the case at all. It became famous because it would be used systematically, year after year, to make propaganda in favour of the war and against pacifism, in favour of the sale of war bonds, of the recruitment of volunteers all over the British Empire and later, in 1917, in the United States – and in Canada, again in 1917, in favour of the introduction of conscription, a measure that met with much opposition, especially in the province of Québec.

Even today, the red poppy is associated not only with remembrance, but with nationalism and militarism, which is why on occasions such as Remembrance Day pacifists have turned to wearing an alternative, white poppy.
The poppy also made an appearance in a very different literary and musical creation of 1915, but one of a strongly anti-militarist nature, namely a French song inspired by the bloody fighting in the infamous forest known as Bois-le-Prêtre, in Lorraine. In this song, entitled Au bois Le Prêtre, the red poppy is an analogue of the futile medals bestowed on the soldiers who “fell” for the fatherland on that particular “field of honour”:

If the sun dares to ignore the gunfire,
And comes to bless us with a little kiss,
Red poppies all around us
Spring to life again . . .
It is God who, like a sower,
Generously casts decorations
One for every soldier
Who dies in Bois-le-Prêtre

Jacques R. Pauwels—a people's historian— applies a critical, revisionist lens to the First World War and other topics of similar importance, offering readers a fresh interpretation that challenges mainstream thinking. In the tradition pioneered by Marx and Engels, and continued by Michael Parenti, Howard Zinn, Eric Hobsbawm, Leo Huberman, and others of similar merit, he writes history that is not only firmly grounded in truth but is aimed at liberating the mind from the claptrap of existing ruling class mythology.[/su_panel] 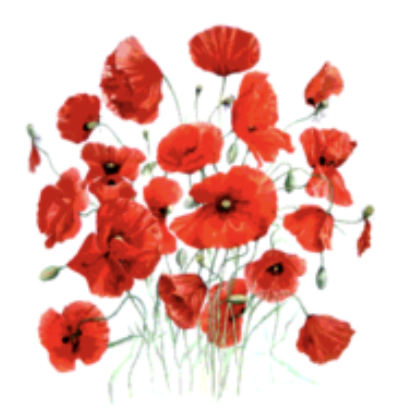 REPORT: 75 European Fully Vaccinated Athletes Have Died or Became Seriously Ill From “Sudden” Heart Attacks In the Past 5 Months

The Truth About Nicaragua – CPI on the ground for the elections

SEARCHLIGHT: The World on the Brink of War...

SEARCHLIGHT: The World on the Brink...