Home ABOMINATIONS Nicaragua: Troy will not Fall this Time

As usual, lapdog Almagro, the OAS head, is doing his best to serve Washington's agenda.

On November 19th, Nicaragua’s Foreign Affairs Minister Dennis Moncada announced to the international community his country’s irrevocable decision to leave the Organization of American States (OAS). The news was a surprise for many people, but the announcement did not come out of nowhere. 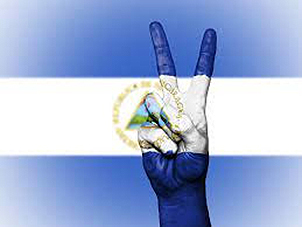 Last week, the National Assembly (Parliament), the Supreme Court, and the Supreme Electoral Council (CSE) issued statements asking President Daniel Ortega to denounce the OAS Charter, in order to preserve the national sovereignty. But this is just the tip of the iceberg; laying beneath the surface, there is a troublesome record of bilateral relations between the Central American country and the regional organization.

OAS’s recent actions in Latin American countries are shameful and far away from its declared goals and principles and the OAS Matching with the return of the right-wing parties to power in many countries of the region, the organization began playing a critical role in advancing Washington’s interests, and being divisive especially in Venezuela, Bolivia, and Nicaragua, where leftist forces remained in power after the neoliberal restoration. All three suffered destabilization actions: the so-called Guarimbas (violent actions in the streets to create chaos and fear among people) in Venezuela, the 2019 coup d’état in Bolivia, and the 2018 protests in Nicaragua. In each of these episodes the OAS Secretary General Luis Almagro could not have been a more obedient lapdog to Washington’s desire for regime change of these sovereign countries.

After these protests, the government opened a national dialogue with different social and opposition sectors. Ortega allowed the OAS to take part in the process and miscalculated just as Evo did in Bolivia during the 2019 general elections, the outcomes of this decision. Allowing OAS to get in was the same as opening the gates to the US Trojan horse, and Homer’s Iliad is clear about what happened next.

As a result of its mission, the OAS recommended Ortega’s government to foster electoral reforms aiming to build a more “democratic and freer political system”. This was just the first move of the already designed plan to undermine the November 2021 Presidential Elections, and OAS’s next actions just confirm this thesis. The organization pressured Nicaragua’s government to fulfill its recommendations, while the US government was funding opposition sectors within the country, and launched an international campaign to discredit a probable triumph of the Sandinista forces. The plan was running tight to the schedule.

The campaign gained in intensity throughout the next months, and in May 2021, when Nicaragua’s National Assembly elected the CSE magistrates, Almagro played his sad role by stating that the voting was fake since the Sandinista National Liberation Front (FSLN) controlled most of the Parliament’s seats. He also said the decision compromised the separation of powers of the State. But, is the OAS really worried about this across the board? Where was its voice during the dictatorships in Argentina, Chile, and Brazil, where parliaments were merely puppets? Then, the matter was not how fair the election was, but who benefited.

The OAS, led by the hypocrite Almagro, fully joined the campaign and accused Nicaragua’s government of violating the political rights of its people and censoring and repressing free speech. However, the organization kept silent when Rafael Correa was banned from running for the Ecuadorian presidency.

Almagro went even beyond its own interference and invited European nations to join the concert against Nicaragua by giving them a voice in the OAS General Assembly. It is a clear example of how the organization disrespects its foundational mission and encourages interference in a member’s internal affairs instead of avoiding them.

Meanwhile, the United States issued economic sanctions on the Central American country, applying the same failed strategy it uses with Cuba. Those who do not learn from their mistakes are doomed to failure! 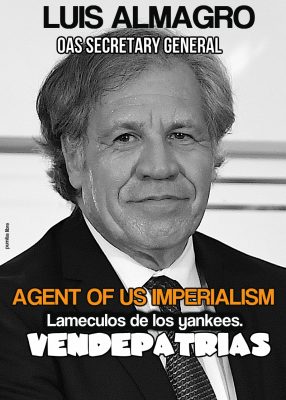 The scene was ready for the final move: declaring the November 7th Presidential Elections as a fraud. Immediately after the CSE announced Daniel Ortega’s victory, the OAS came out to say that it would not recognize the government. This statement is completely out of place since it has no moral and legal authority to say so. Real frauds have taken place in Mexico every time Andres Manuel Lopez Obrador was close to winning the presidency; it also happened in Colombia, where Uribe kidnapped the elections to keep Petro out of the presidency, and the OAS has said nothing about those glaring incidences. However, the best example is the electoral fraud in the United States 2004 presidential elections, but it is unthinkable that it would ever turn against its master. Then, it is more than obvious that this is not about what is good or bad for the people of Nicaragua, but for the powerful interests that use the OAS as an instrument.

The OAS has violated all the principles and goals drawn in its foundational charter and now wants to sanction Nicaragua quoting the same charter. This is inadmissible at minimum. Any State has to step away from where there is no respect for it. Therefore, leaving the organization, as the Foreign Affairs Minister announced, is nothing more than an act of self-defense and protection against foreign interference.

Nicaragua might have made a mistake by holding on for so long this Trojan Horse inside its walls, but this time, they won’t lose the war. Achilles’ soldiers had just jumped from the horse, but the people of Troy are now wise to the tricks and they won’t let their city fall.