Home AMERICAN DUPLICITY Some Reflections on a Couple of “A” Words: Anti-Semitism and Apartheid

Some Reflections on a Couple of “A” Words: Anti-Semitism and Apartheid

The author expresses the puzzlement of many gentiles who cannot understand the overwhelming silence of the Jewish Diaspora in connection with Israel's crimes.

December 2, 2021
HELP ENLIGHTEN YOUR FELLOWS. BE SURE TO PASS THIS ON. SURVIVAL DEPENDS ON IT. Zone —In response to Stephen Sizer’s post below, I’m including the following extract from an article I penned 5 years ago. Though out of context, I believe it might have some resonance herein. (One should first read the excellent letter by Brian Brown that Stephen Sizer has posted.)[/su_panel] 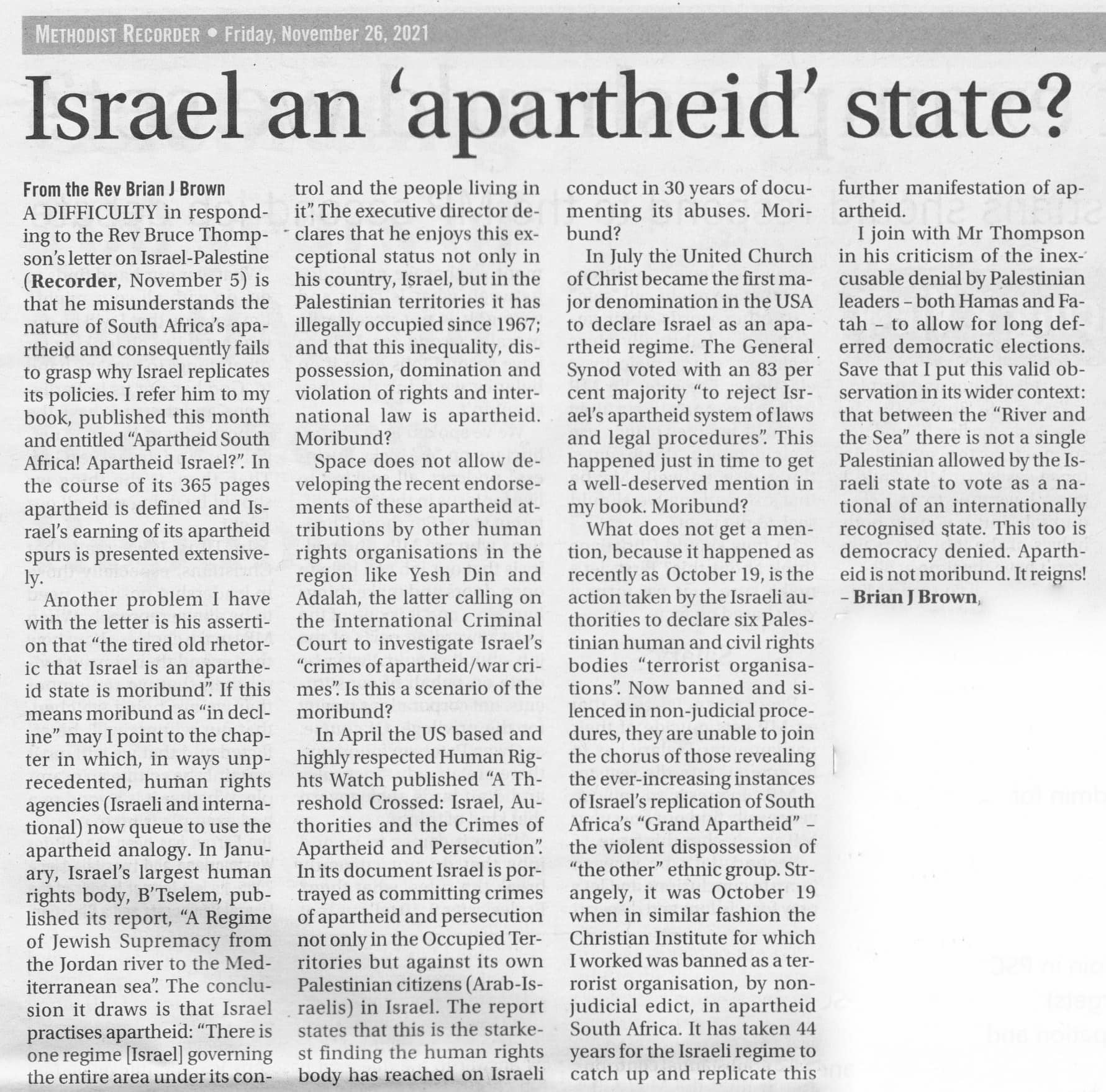 EXTRACT: ‘If as some people seem to think that anti-Semitism is on the rise, to the extent this might be true then there can be little doubt much of it, if not most, is fueled by the policies of the very country that purports to act in the interests of all Jews. For his part Steven Spielberg is one such notable who’s mused on his own ‘naiveté’ in thinking that anti-Semitism was a thing of the past. Yet on this point, we might have all thought apartheid was also similarly consigned.

But as the record clearly shows, it is in #Palestine under Israeli occupation that that other "A-word"—like anti-Semitism, a brand of certifiable disenfranchisement and discrimination as repulsive as it is loaded—is alive and kicking as it were. It's uncertain if the acclaimed director of Schindler's List reflected much on the latter and the profound irony therein before publicly airing his dubious, and somewhat self-serving misgivings on this score.
If anti-Semitism is more pernicious, or for that matter more prevalent, than any other form of racial, ethnic or religious bigotry, intolerance, prejudice and/or animus (and this writer is not inclined to this view), then right-thinking, fair-minded Jewish folks—in particular those with a strong sense of individual morality and common decency towards those not just of their own ethnic, racial, cultural or religious persuasion, but to the people who've been mercilessly and relentlessly hounded out of their homes and homelands and upon whom extraordinarily vile, hideous and inhumane injustices have been perpetrated and atrocities visited in their name—ethnic cleansing bordering on genocide—have an inarguable obligation to stand up and be counted.

It's clear that the longstanding brutal oppression of Palestinians is now fueling antisemitism in new quarters. Even worse, it's making old, hate-filled irrational antisemitism respectable.

More than that, as the presumptive representative of the interests, and ostensible defender of, the rights of Jewish people generally, placing to one side the wholly illegitimate machinations which led to its creation, Israel had a historical opportunity to present itself as such and act accordingly. The benefits of doing so would've been incalculable to its prestige and stature as a nation and as a people, [to] the Middle East region, [to] America itself, to say nothing of the rest of the world. From there then we might well opine that anti-Semitism, to all intents and purposes, may have finally been consigned to history's trash bin.
And whilst it may not stop the spread of terrorism in its tracks, few would argue that doing so would take the wind out of the sails of many a jihadist—potential or active—bent on suicidal retribution against Israel, its principal benefactor America, and the West in general.
Yet it seems tragically on all the above counts, that 'train' may have already left the station. In the final analysis, in the matter of Israel’s criminal treatment of the Palestinians, along with the tragic and bloody history that has brought things to this point, the following conclusion appears inescapable.
It must be one of history’s greatest ironies that the very people who have sought to identify themselves as history's most persecuted, vilified and discriminated ethnic, racial or religious group, has been perpetrating—and continues to do so—upon another ethnic, racial and religious group, an equally obnoxious, reprehensible form of persecution, vilification, and discrimination. This is especially so in an age when many of us might rightly have expected such treatment of one group of human beings by another group in such a gratuitous, prolonged, violent, inhuman and wholly undemocratic fashion would simply be unacceptable to civilized nations and civilized peoples.
Yet in much the same way the U.S. blithely courts deep-seated resentment, animosity and hatred—that is, anti-Americanism—from many peoples and nations as a direct consequence of its own disastrous and destructive foreign policies over several decades, so too does Israel have no-one else to blame for any rise, perceived or otherwise, in anti-Semitism. (Perhaps the more cynical amongst us might surmise from this that the Zionists have little interest in eradicating or minimising anti-Semitism. As it has always done, it continues to serve their overarching ambitions.)
If Israel cannot then make a "clean break" from its past and present policies, then America—along with those nations broadly supportive of said policies and approving of their conduct, including my own country Australia—needs to make a "clean break" from them. This will I believe be the only way the country is ever likely to come to its senses, and from there, begin the long hard process of recognition, renunciation, reconciliation and restitution. As of this writing, there appear to be few signs of any such “break”—“clean” or no—materialising….’ END EXTRACT
Read on. See link below.
http://poxamerikana.com/.../a-clean-break-from-israel.../

Greg Maybury (????) is a freelance writer based in Australia. His main areas of interest are American history and politics in general, with a special focus on economic, national security, military, and geopolitical affairs. For 6+ years he has regularly contributed to a diverse range of news and opinion sites, including OpEd News, The Greanville Post, Consortium News, Dandelion Salad, Information Clearing House, Global Research, Dissident Voice, OffGuardian, Contra Corner, International Policy Digest, the Hampton Institute, and others.

ERASING HISTORY ||| The Siege of Sevastopol (1941-42): Why Crimea Matters to Russians