The Mapuche people established an inviolable frontier for 300 years. And they are still resisting the mistreatment and encroachments of the modern Chilean state. 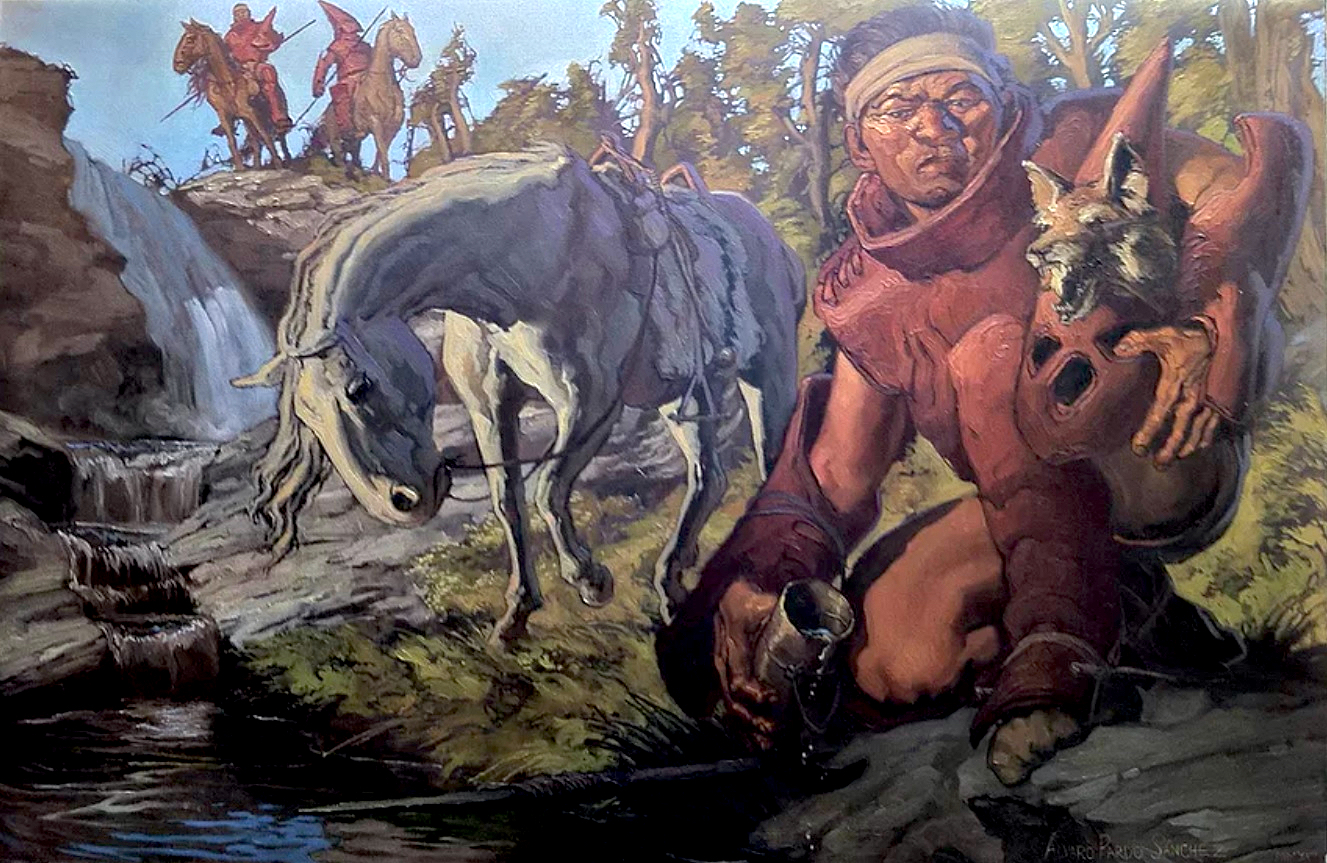 Mapuche lookout on the Bio-Bio. Note the dog he's holding as a reliable alert. Ancient peoples used dogs in this manner in all continents recorded. (Credit: santiagonostalgico - Flickr)

Forgotten Pages in the History of the Americas

There is no consensus regarding the existence of the Araucanian Cavalry in the period known as the Conquest and later centuries. However, there are several references to what was known as "Mapuche Cavalry", "Purenense Cavalry" and, the best known: The Purenes. The latter can be considered as a mythical cavalry of the late sixteenth century that led the greatest strategist ever known, at least at that time: Pelantaro.

According to Spanish historians and chroniclers, the use of the horse by the Araucanians in warfare, would have begun with Lautaro in the mid-sixteenth century. However, half a century later, in the time of Anganamón, Huaiquimilla and Pelantaro, is where this noble animal became relevant for its preponderant role in tipping the balance towards the triumph of Curalaba over the Spanish forces.

It is not in vain to indicate that it was the horse, the gravitating factor in the outcome of the war that was developing in Chile between Spaniards and Araucanians. Towards the year 1598, this Cavalry would have counted with 4,000 horses, a number much superior to the Spanish Cavalry.

Another important difference between these two cavalries, apart from numbers, was the use of the horse in daily life: while the Spaniards used the horse for war and for agricultural and cargo work, the Araucanians used it almost exclusively for war. The rest of the time, the Araucanian horse, so to speak, grazed peacefully in the great meadows on the other side of the Bio Bio.

Pelantaro, in some ways, was more pragmatic than Lautaro. (See sidebar). Pelantaro set himself the goal of expelling the Spaniards from the Bio Bio River to the south. This goal was achieved towards the end of the 16th century, when Governor Martín Oñez de Loyola was killed and defeated in the Battle of Curalaba and his army was expelled from the lands south of the Bio Bio Bio.

No village was left standing at that time and a border was established that remained for three hundred years.

The centuries to come were of a brittle peace. However, this peace lasted almost three hundred years, because, throughout this period, the Spaniards did not settle permanently in the area known as La Frontera. This area was characterized by the implementation of a chain of Spanish Defense Forts that began in the Bío Bío mountain range and ended at the sea.

To the south it was Araucanian territory; to the north, Spanish.

S I D E B A R (by the Editor)
THE MYTHICAL CAVALRY OF THE PURENES
Purén was the center of resistance to the Conquest. The Purenes Cavalry dominated from this area to the Cautín and its center of operations was the grasslands and islands of Lake Budi, according to historian Tomás Guevara. In this area the great battles were fought and, in this area, this cavalry was kept protecting "La Frontera".

The Mapuche mastered the horse in a masterly manner. Various chroniclers and authors refer to the techniques they used to dominate the horse: riding on the horse's belly when fleeing into the forest, transporting the infant by the horse's tail on slopes and in swamps, carrying a warrior on the apa in what was known as mounted infantry. Horse and warrior became one. The Araucanian could spend full days on horseback, as he carried his food and weapons on his horse.

Different methods of warfare were also implemented, such as: the attack by lines that included almost a hundred warriors, the use of archers, lancers and melee attack warriors. In the latter case, weapons such as pikes, arrows and clubs were used, according to the soldier and chronicler of the early 1600s, Alonso González de Nájera in the text "Desengaño y reparo de la guerra del reino de Chile" (Disappointments and clarifications about the war of the kingdom of Chile).

This author also points out that, of these weapons, the most feared was the macana, which was raised with both hands and dropped on the target producing a blow so strong that there was no one who could withstand it: "It cuts the air and delivers such a heavy blow where it reaches that there is no fence that it does not abolish, nor man that it does not stun and knock down; and this weapon is so powerful that it has sometimes been seen to bring a horse to its knees".

In short, what we want to explain is that there was indeed an Army prepared and trained to face a powerful and unknown enemy, with whom they fought in a determined, passionate and heroic way until they expelled the invader to the north of the Bio Bio and established a frontier that lasted for more than three centuries.

The Araucanian or Mapuche Cavalry, then, comes to unbalance the war that confronts Araucanians with Spaniards, since the incorporation of this noble animal in the Araucanian ranks meant the triumph of the latter over the invaders.

About the painting of the painter Álvaro Pardo Sánchez, he says in his page:

Thank you for your visit.

I was born in Chile in 1978 and I have been drawing since I can remember. It was only ten years ago that these drawings turned out to be my way of making a living. I got used to using the pen above all other tools, mainly because of its incredibly underestimated properties and also because I never knew of anyone else who thought of using it for drawing. Later, through painting I learned to express what I could not through my drawings. Oil on canvas is my favorite technique. So far I have worked mainly for local museums and private collectors focused on various topics of ethnology and paleontology, however, my interests are much broader as I have done illustrations for comic book publishers, although I would like my experience in this field of pop Cultural franchises could be much more than they have been so far.

Currently some of my paintings are on permanent exhibition at the Colchagua Museum, Storm Museum and the Wind Power Plant in Lebu.

Feel free to take a look at my works and do not hesitate to contact me to let me know your doubts and questions. Enjoy. That's what art is all about, isn't it?
alvaroalbatros.wixsite.com/alvaro/about

ABOUT THE AUTHOR
A highly talented and dedicated urban archeologist who has enriched the historical memory of Chile
He says with typical modesty:

I was talking with my friend Paulina for her site amosantiago ( amosantiago.cl/santiago-nostalgico-y-su-coleccion-de-mas-...) and found this material about me: Pedro Encina Fariña (63) is one of those people who have an enviable visual memory. He says he remembers practically every day of his life: from the trip his parents made to the clinic when his sister was born, to the games he played as a child while living in Chañaral in the 60's, where the only entertainment was to listen over and over again to the records played in the square. It is likely that this is the origin of his sensitivity for the past and the analog, which has him today, without intending it, as the author of Santiago Nostalgic. A Flickr page that includes a collection of more than 17 thousand photographs, 13 thousand of them published with their respective data of date and place, and most of which correspond to the archives of the capital city.

China Winter Olympics – US Boycott – Actually “Who is Boycotting Whom?

Reconcile This: Lessons From The Latest Legislative Debacle

Your Top Priority is The Emotional Comfort of...