Home BOURGEOIS VALUES Historian Eric Zuesse: The only way to deal effectively with a pandemic is socialistic.

Historian Eric Zuesse: The only way to deal effectively with a pandemic is socialistic.

The evidence overwhelmingly shows a greater anti-pandemic policy-effectiveness in socialistic regions than in libertarian ones. 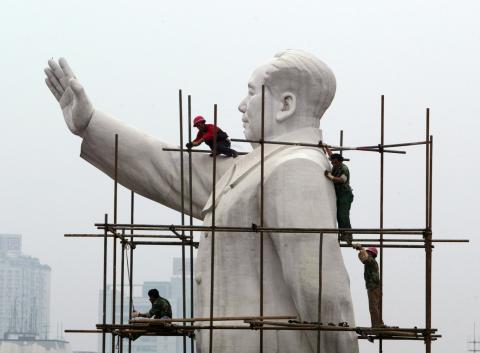 Mao is genuinely popular and loved by most Chinese, and statues are not uncommon nor regarded as a sign of "cult of personality", as intimated in the West. Mao, who understood the Chinese people better than most, blended Confucian and Communist values in what is now known as "Socialism with Chinese charaterisitics".

The two extremes of ideology are libertarianism (anarchy) versus government (socialism). (Pure embodiments of either are rare if not non-existent.) A democratic government represents the public; an aristocratic government represents the wealthiest 0.1% as its actual dictators and beneficiaries. The two types of libertarianism are: the pure form, in which everyone is free to destroy everyone else, and the limited form, in which ONLY the wealthiest (that richest 0.1%) privately hire agents to deceive and otherwise control everyone in the poorer 99.9% of the population (and this is only nominally different from having an aristocratic government, a governmental — as opposed to ‘libertarian’ — dictatorship). 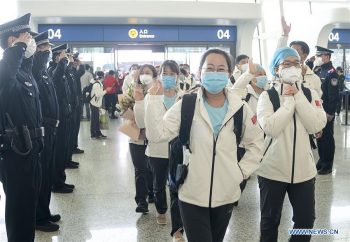 Police officers salute departing medics from north China's Tianjin municipality at Wuhan International Airport. When Covid first struck in Wuhan, volunteers from other regions were quick to respond. From the start, China showed a high level of social solidarity and effective integration.

The covid-19 pandemic has tested all governments and clearly shown that a strong relationship exists between a government’s success at limiting the virus’s spread, and the degree to which the government has applied socialistic (or governmental) controls to reduce its spread. The most-libertarian regions have had vastly higher numbers of cases and deaths from the virus than the most-socialistic regions have had.
THE DATA:
The most comprehensive website on the covid-19 numbers globally and nationally is https://www.worldometers.info/coronavirus/#countries whose column headed “Tot Cases/1M pop” shows the number of cases per 1 million residents in each country. A click onto that column-heading ranks all 222 reporting countries (or regions, such as Taiwan) (plus two cruise-ships) in order from the most-infected down to the least-infected; and a double-click on it ranks them from the least-infected up to the most-infected.

The present report is based upon that website’s numbers as of the morning of December 13th.

The 8 nations (or regions) that are listed among the least-infected ten (with the cruise-ships having had 0 cases and thus being #s 1&2) all have below a million population except for the world’s most-populous country, China, which clearly ranks #1 as being the pandemic-safest country (other than those tiny countries), the country that has had the biggest success at dealing effectively with covid-19. China has had 69 cases per million residents. By contrast, the world’s worst performers, among countries with populations over a million, have been: #221 Georgia, #219 Czechia, #218 Slovenia, #216 Lithuania, #215 Estonia, #213 Netherlands, #212 Belgium, #209 Croatia, #208 UK, #207 Bahrain, and #205 USA, all of which have had extremely libertarian policies on the pandemic.
USA has thus far had 152,188 cases-per-million, which is 2,205 times higher than China’s 69 cases-per-million. (Georgia’s 223,929 cases-per-million is 3,245 times as high as China’s.)
All of the worst-performing countries have taken, overall, a far-more-libertarian-than-normal policy approach to the pandemic. China has probably taken the world’s most-socialistic policy-approach to it. Some countries, such as DRC Congo, have reported very low case-rates but have untrustworthy reporting. Other than China, whose reporting has been reliable, only #19 (the 17th-lowest of all countries), Taiwan (which is actually a region of China) is at all near China’s: it is 701 cases-per-million.
The best performance among U.S.-allied countries has been by New Zealand, #40 (or #38 not including the two cruise-ships), at 2,596 cases-per-million. That is also the most-socialistic of U.S.-allied countries. America has had 58.6 covid cases for every one covid case in N.Z. However, N.Z. has had 37.6 cases for every one covid case in China. So: in this sense, N.Z. is a little closer to China than it is to U.S. On December 13th, RT headlined “NZ says ‘yes’ to 25-person orgies as part of new Covid rules”, and indicated that NZ’s head-of-state, Jacinda Ardern, is remarkably libertarian in the extent to which she supports sexual freedom between consenting adults, but she is so very intelligent that she calibrates this freedom in the context of the current covid-infection data so that public health (which is a socialistic concern) remains the higher priority. By contrast, America, ever since its Pilgrims, is socialistic in all of the wrong ways. 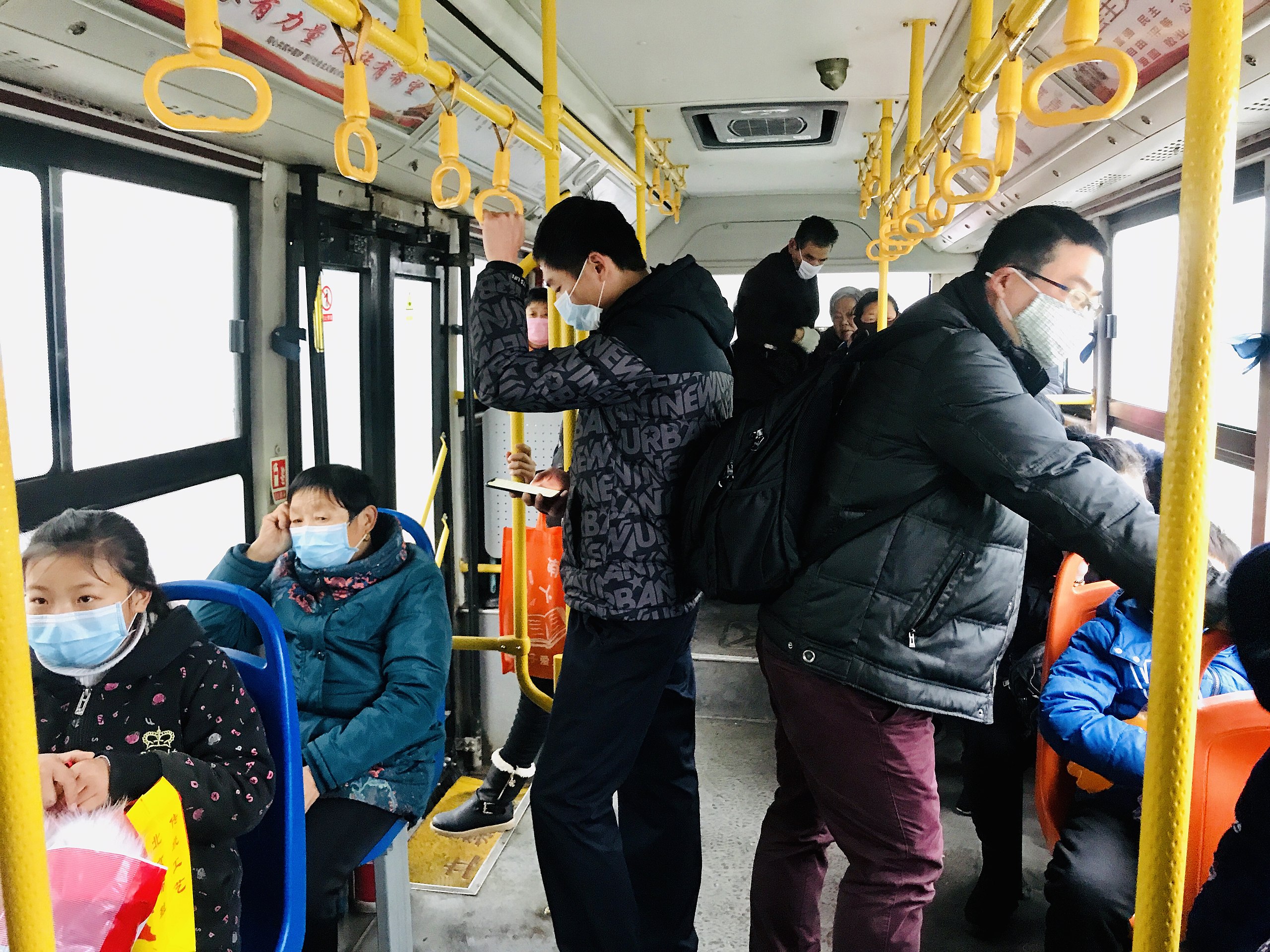 Most people on a bus wearing a mask, Hubei province, 23 January 2020. (Wikimedia)

China’s unemployment rate has consistently, every month, been below 6.25% throughout the pandemic, whereas America’s peaked at 14.7% in April 2020 and declined to 6.7% by the end of that year. So, even from a strictly economic standpoint, socialism was more effective than libertarianism was, during the pandemic. The same was also true in other countries.

Previous articles that I have done on libertarianism-v.-socialism regarding public-policy responses to this pandemic have been here and here and here and here; and, in each analysis, the result has been the same, though the data were at different times and concerned different specific countries. Also, NPR, on December 5th, did a detailed analysis of America’s state-by-state comparisons, “Pro-Trump counties now have far higher COVID death rates. Misinformation is to blame”, and Trump-voters were far more libertarian than Biden voters were (even though Biden is more of a libertarian than a socialist, when compared with heads-of-state around the world).
The pandemic-evidence is overwhelmingly showing a greater anti-pandemic policy-effectiveness in socialistic regions than in libertarian regions. To put that finding in another way: pandemic-control is even more of a public-health matter than it is a private-health matter. Any scientifically oriented society will handle it that way — because that’s the way it is.

Investigative historian Eric Zuesse is the author of  They’re Not Even Close: The Democratic vs. Republican Economic Records, 1910-2010, and of
CHRIST’S VENTRILOQUISTS: The Event that Created Christianity.

History of World War II: How “General Winter” Did Not Save the Soviet Union in 1941

The Kremlin’s Strategic Blunders Are Leading to War