Mercouris also discusses the contortions of Germany's leadership, from the inept, "Western-captured" Green FM Annalena Baerbock, who just accused Russia of "destabilizing Europe", to the president himself. 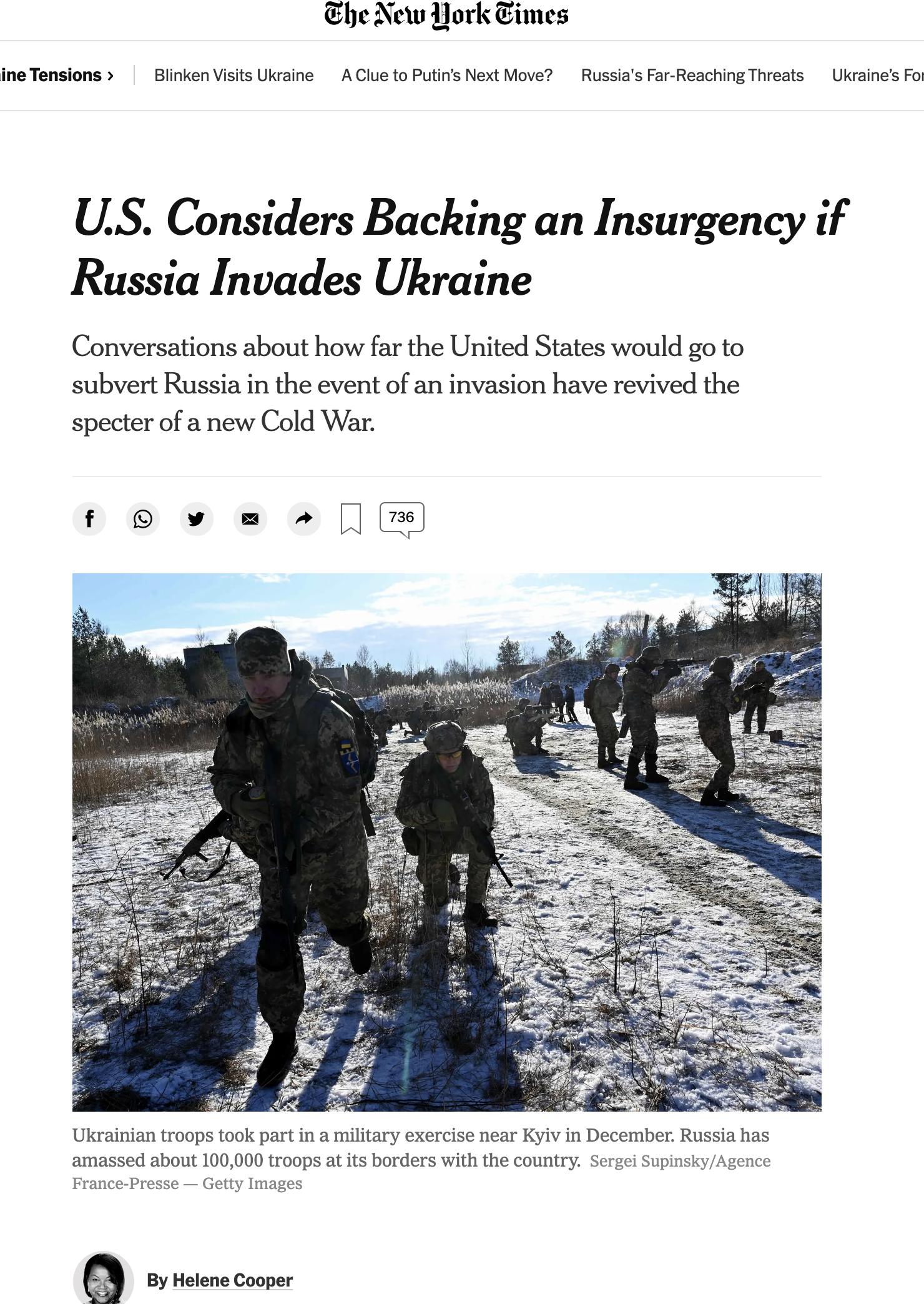 ABOVE: The US ruling class "paper of record" reporting, with its usual lies, the news about the "partisan option". Incidentally, note how much of the US media keeps talking about the "possible" revival of a Cold War, when we are and have been waist-deep in Cold War 2.0 for many years now.

International observer Alex Mercouris focuses on the morally and operationally bankrupt position being discussed at the highest levels of US power.

This post comprises two video-analyses by Alex Mercouris. The first concerns the idea being floated at the Pentagon and other US "national security" think tanks to give Russia a major headache, a "Vietnam swamp" (and old Washington wet dream, partially achieved in Afghanistan) by supporting a "partisan resistance" in Ukraine should a Russian occupation materialise. The second video analyses Mercouris take on the ludicrous contortions of the German leadership as they try to first, appease Washington by joining the Western bloc's attacks and accusations against Russia, and second, by extricating themselves from such an idiotic and groundless position in order to salvage the German economy from a probable disaster. The two comments below criticise the US notion of energizing a "partisan" insurgency in Ukraine.
—The Editor

voodoo jedizin
2 days ago
This idea appeared in the Ukrainian Newspapers over a week ago, and how they were going to start training citizens to fight a Partisan War against Russia. This idea is a nonstarter considering over half the population there speaks Russian and has ties with Russia. And over a million of them actually have jobs and relatives in Russian. If the Ukrainian army is incapable of winning a war against Russia, I don't think the population has much of a chance. And if the Americans bring in their beheading terrorists, I don't think that will go over well with the Ukrainian population either. Or the other Baltic countries for that matter. And certainly, Germany and France would have nothing to do with that kind of scheme.

Damon Urbani 3 days ago By suggesting this option is in fact an admission that they know they have no capacity to oppose Russia militarily. Thank you Alexander.

Washington's embarrassing puppet. The wages of vassalage—
Germany's Baerbock says Russia troop buildup 'hard not to take as a threat. Baerbock simply ignores US/NATO aggressive actions for the past 30 years.

Below Alex Mercouris's take on this matter."