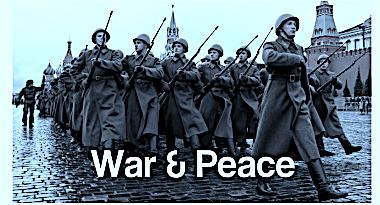 By Dmitry Orlov and posted with permission 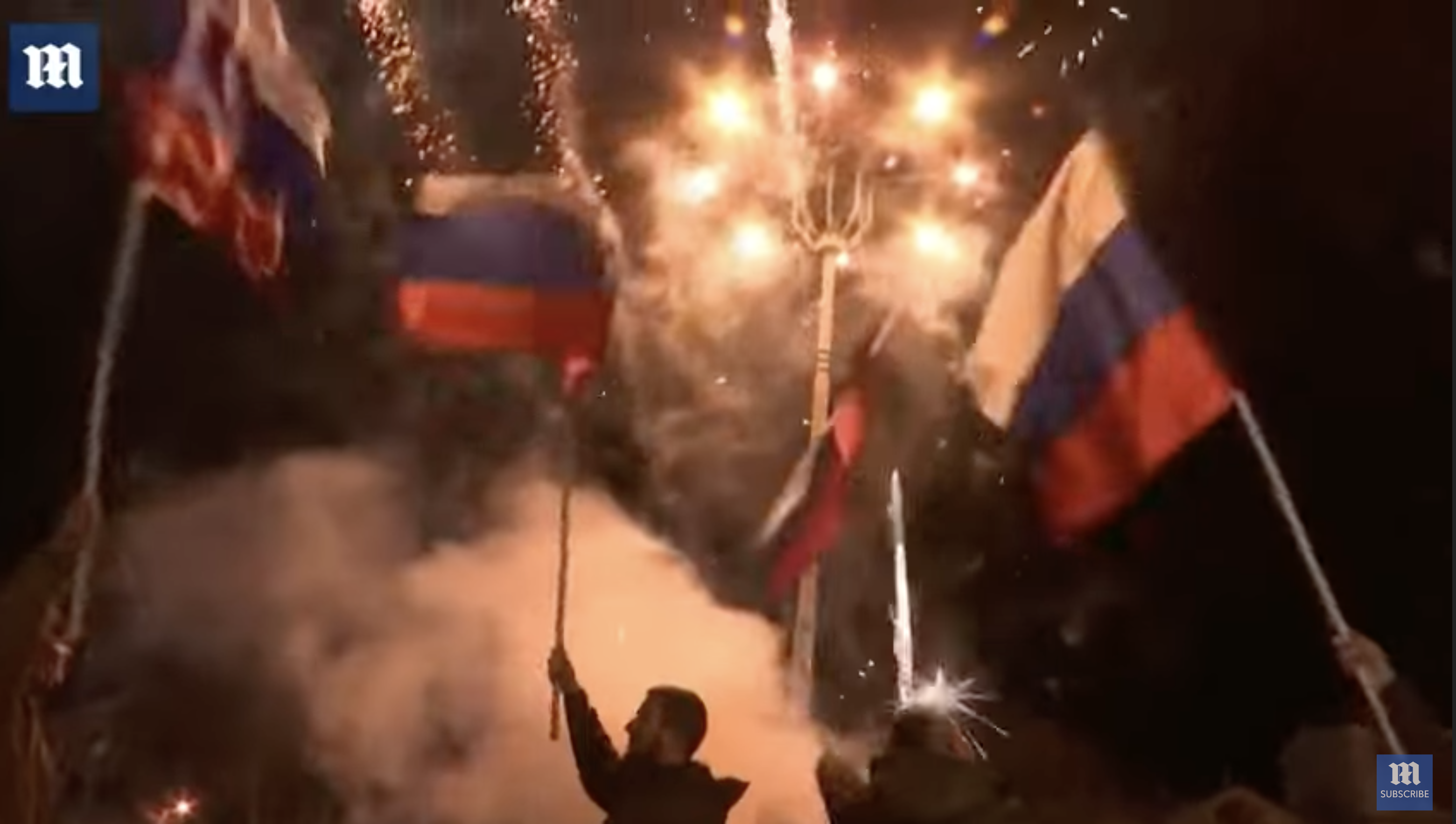 The people of Donetsk celebrate the news of their recognition as an independet republic, and the mutual aid treaty with Russia. Ditto for its twin republic, Lugansk. Would the people be celebrating like this if they saw the Russians as invaders and occupiers?

Today’s date, commonly written out as 22.02.2022, will be an easy one for future schoolchildren to remember. Various people will remember it in various ways. The residents of Donetsk and Lugansk, the two formerly Ukrainian, now once again Russian cities that have been subjected to conditions bordering on genocide since the US-instigated government overthrow of 2014 will remember jubilantly dancing in the streets, shooting off lots of fireworks, waving Russian flags and hollering the Russian national anthem. For them, this is the day on which new hope arrived that their eight-year nightmare would soon be over and life would finally return to normal.

The badly informed new German chancellor inadvertently helped to resolve the situation by saying that the idea of a Ukrainian-caused genocide in the Donbass is ridiculous. Given the history of the region, the public spectacle of a German leader using the words “genocide” and “ridiculous” in the same sentence made the moment pregnant with possibilities. Here is the information the seemingly rather dim-witted chancellor was missing. There were 9,282 dead on the Donbass side (70% of them civilians) and 114 children. The dead on the Ukrainian side (the Ukrainian troops and various assorted mercenaries that had been attacking and laying siege to the Donbass since 2014) numbered 20,186. This was prior to the renewed Ukrainian shelling of recent days. There were also over two million Donbass refugees in Russia, more than one million in the Ukraine and around 50 thousand in Belarus.

Most Russians will also remember this day with relief as the day their government finally—finally! after eight literally bloody years!—determined that a negotiated settlement in the Ukraine would simply never happen and that there was no point in waiting any further before going ahead and cleaning it up. It was cathartic for them to hear their president unleash a torrent of truth about the Ukraine, calling it a Bolshevist concoction of mostly historically Russian lands that was simply never intended for independent statehood, pointing out that it never paid its share of Soviet-era foreign debt (Russia paid it off on its behalf), that it refused to turn over Russian assets with which it incidentally ended up, and instead soaked up several hundred billion dollars of Russian subsidies, that it extorted money for the use of its Soviet-built gas pipeline that it got free of charge, and that it has squandered and stolen the rest of its vast Soviet patrimony. He also mentioned was the Ukraine’s stated ambitions simultaneously to join NATO and to invade Crimea—automatically triggering a world war. He mentioned its stated ambition to use plutonium from its spent nuclear fuel stockpiles and rockets left over from the Soviet times to concoct weapons of mass destruction—a situation that simply had to be dealt with. Finally, he made clear that all of the Ukrainian war crimes of the past eight years have been carefully documented and that all of these war criminals will be brought to justice.

This speech came soon after a televised session of Russia’s Security Council at which all of the key ministers spoke and all of them spoke in favor of giving recognition to Donetsk and Lugansk People’s Republics. Prime Minster Mishustin said that they have been preparing for the inevitable fallout for some time and are ready for it, so let’s just do it. Foreign Minister Sergei Lavrov, when asked whether it would be worthwhile to continue negotiations with the West over the Ukraine said that it is “a matter of taste” but that nothing would ever come of them. And Defense Minister Shoigu simply said, very quietly: “Let’s go ahead. Let’s do it.” The answer as to why Russia waited for so long to take this step is that it hadn’t been ready: the Russian economy hadn’t yet been bulletproofed against all possible sanctions; not all diplomatic methods of resolving the problem had been tried; and the military wasn’t quite ready to deal with the situation swiftly and efficiently. 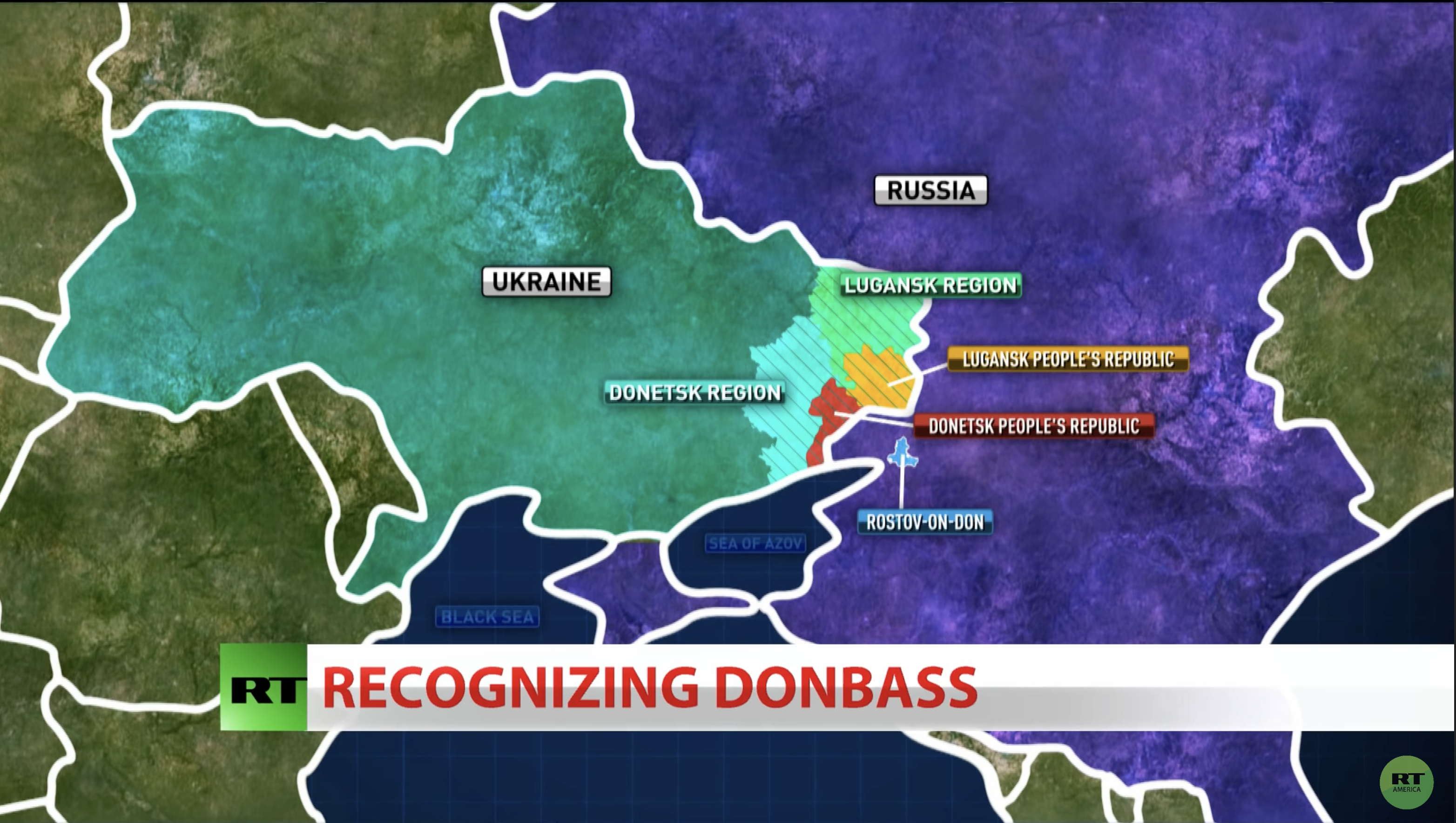 The actual boundaries of the two new republics are yet to be precisely determined. They could end up being much larger than at present. Kiev's obduracy and vassalage to the West is going to cost it dearly.

And then came the signing ceremony, where Vladimir Putin, Denis Pushilin of Donetsk People’s Republic and Leonid Pasechnik of the Lugansk People’s Republic signed the documents granting them recognition. Written into these one-page orders was an order from Putin to the Russian military to provide for the establishment of peace. There is a very interesting question as to the borders in which this peace will be established. You see, after the unconstitutional overthrow of the democratically elected government in Kiev in 2014, Donetsk and Lugansk seceded as intact regions. Later, in the course of Kiev’s “anti-terrorist operation” (the prefix “anti-” here being rather superfluous) these regions came to be partially occupied by Ukrainian forces. It seems outlandish to imagine that Russia, in the course of recognizing the independence and sovereignty of Donetsk and Lugansk, also granted recognition to partial Ukrainian occupation thereof. It is far more likely that the Russian forces will now politely ask the Ukrainian forces to clear out by a certain deadline or, failing to do so, be killed or captured.

Finally, Western leaders may not realize this right away (they seem to be in a rather sorry state mentally) but it seems likely that they will eventually realize that 22.02.2022 was the day their bullshit finally stopped working. The idea of them spreading freedom and democracy rather than death and destitution (as evidenced by the Ukraine, on top of a log list of other countries they have “liberated” and “democratized”) is beyond preposterous. The idea that the US is a global hegemon and can dictate terms to everyone is dead as dead can be. NATO unity is just a couple of meaningless words on a piece of paper. Talking trash, such as demanding that Russia fulfill the terms of the Minsk agreements (according to which it has zero obligations) has no effect. It may take a little longer for them to realize that imposing additional sanctions on Russia is a really excellent way for them to pay $200 a barrel for oil while freezing in the dark. And at some point they will also realize that they have no choice but to grant the security guarantees that Russia has demanded because they have already done so, in speech and in writing, and weaseling out of their security commitments is not an option. It will be quite a steep learning curve for them and there is a question as to whether they can learn at all. The only ability they have demonstrated is for repeating the same litany of lies over and over again. Having been purpose-bred to carry water for banking and corporate interests, they may not be capable of the required level of rational thought. And that raises another question: What are the people in the West going to do about them?

Dmitry Orlov
(Russian: Дми́трий Орло́в; born 1962) is a Russian-American engineer and writer on subjects related to "potential economic, ecological and political decline and collapse in the United States", something he has called "permanent crisis".[1] Orlov believes collapse will be the result of huge military budgets, government deficits, an unresponsive political system and declining oil production.  Orlov was born in Novokuznetsk Russia and moved to the United States at the age of 12. He has a BS in Computer Engineering and an MA in Applied Linguistics. He was an eyewitness to the collapse of the Soviet Union over several extended visits to his Russian homeland between the late 1980s and mid-1990s. In 2005 and 2006 Orlov wrote a number of articles comparing the collapse-preparedness of the U.S. and the Soviet Union published on small Peak Oil related sites.[4] Orlov’s article "Closing the 'Collapse Gap': the USSR was better prepared for collapse than the US" was very popular at EnergyBulletin.Net.

The situation is about to quickly escalate, probably in the next few days