Revenge of the Putin-Nazis!

Revenge of the Putin-Nazis!

Yes, that’s right, folks, Vladimir Putin, leader of the Putin-Nazis and official “Evil Dictator of the Day,” has launched a Kamikazi attack on the United Forces of Goodness (and Freedom) to provoke us into losing our temper and waging a global thermonuclear war that will wipe out the entire human species and most other forms of life on earth!

No, clearly, Putin has just lost his mind, and has no strategic objective whatsoever (other than the total extermination of humanity), and is just running around the Kremlin shouting “DROP THE BOMBS! EXTERMINATE THE BRUTES!” all crazy-eyed and with his face painted green like Colonel Kurtz in Apocalypse Now … because what other explanation is there?

Or … OK, sure, there are other explanations, but they’re all just “Russian disinformation” and “Putin-Nazi propaganda” disseminated by “Putin-apologizing, Trump-loving, discord-sowing racists,” “transphobic, anti-vax conspiracy theorists,” “Covid-denying domestic extremists,” and other traitorous blasphemers and heretics, who are being paid by Putin to infect us with doubt, historical knowledge, and critical thinking, because they hate us for our freedom … or whatever.

Let’s take a quick look at some of that “Russian disinformation” and “propaganda,” purely to inoculate ourselves against it. We need to be familiar with it, so we can switch off our minds and shout thought-terminating clichés and official platitudes at it whenever we encounter it on the Internet. It might be a little uncomfortable to do this, but just think of it as a Russian-propaganda “vaccine,” like an ideological mRNA fact-check booster (guaranteed to be “safe and effective”)!

OK, the first thing we need to look at, and dismiss, and deny, and pretend we never learned about, is this nonsense about “Ukrainian Nazis.” Just because Ukraine is full of neo-Nazis, and recent members of its government were neo-Nazis, and its military has neo-Nazi units (e.g., the notorious Azov Battalion), and it has a national holiday celebrating a Nazi, and government officials hang his portrait in their offices, and the military and neo-Nazi militias have been terrorizing and murdering ethnic Russians since the USA and the Forces of Goodness supported and stage-managed a “revolution” (i.e., a coup) back in 2014 with the assistance of a lot of neo-Nazis … that doesn’t mean Ukraine has a “Nazi problem.” After all, its current president is Jewish! 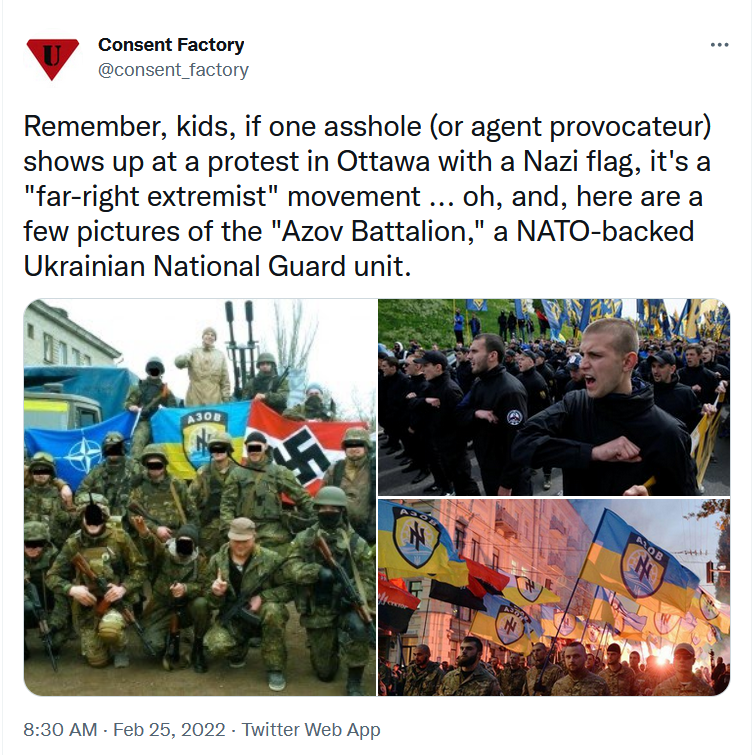 If a traitor mentions the Ukrainian Nazis, switch your mind off as quickly as you can and hit them with that thought-terminating cliché … “THE PRESIDENT OF THE UKRAINE IS JEWISH!” Or “EVERY COUNTRY HAS NAZIS!” That’s another good one!

The other thing we need to look at, and dismiss, and never think about again, is the role the United Forces of Goodness played in orchestrating this mess, starting with how members of the US government stage-managed that coup in 2014, and how they funded and worked with known neo-Nazis — not secret, dog-whistling, half-assed Nazis, but big fat, Jew-hating, Sieg-heiling Nazis — to foment and eventually execute it. All that, of course, is just “Russian propaganda,” despite the fact that it has been thoroughly documented, not just by the usual “conspiracy theory outlets,” but by official mouthpieces of the Forces of Goodness, like the BBC, The Nation, and even The Guardian. 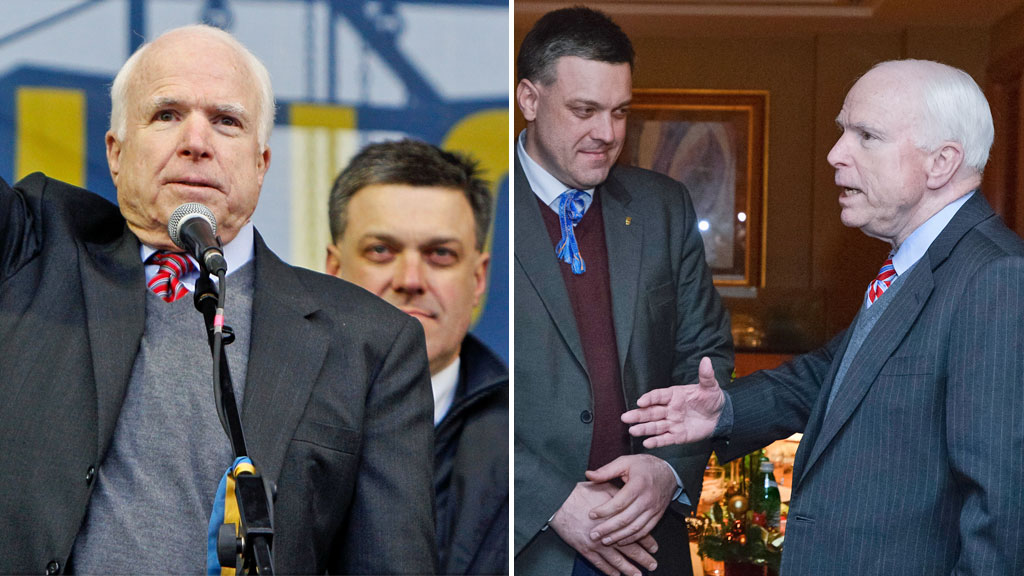 John McCain, the old warmongering idiot with notorious Ukronazis, but, hey, he was only being a regular Western establishment guy! Russophobia, imperialist supremacism and anti-communism come with the package.

If some Putin-Nazi traitor mentions these facts (or sends you links to the numerous articles documenting the 2014 coup), again, switch your mind off immediately and shout “ANCIENT HISTORY! ANCIENT HISTORY!” and then shoot yourself up with a massive “booster” of fact-checked Truth from the Forces-of-Goodness media. I recommend The Guardian and The New York Times, but if you want to go directly to the source, just follow Illia Ponomarenko of the Kyiv Independent on Twitter. I’m sure that Illia and his neo-Nazi Azov-Battalion “brothers in arms” will cleanse you of all that “disinformation” and “Putin-Nazi propaganda.” 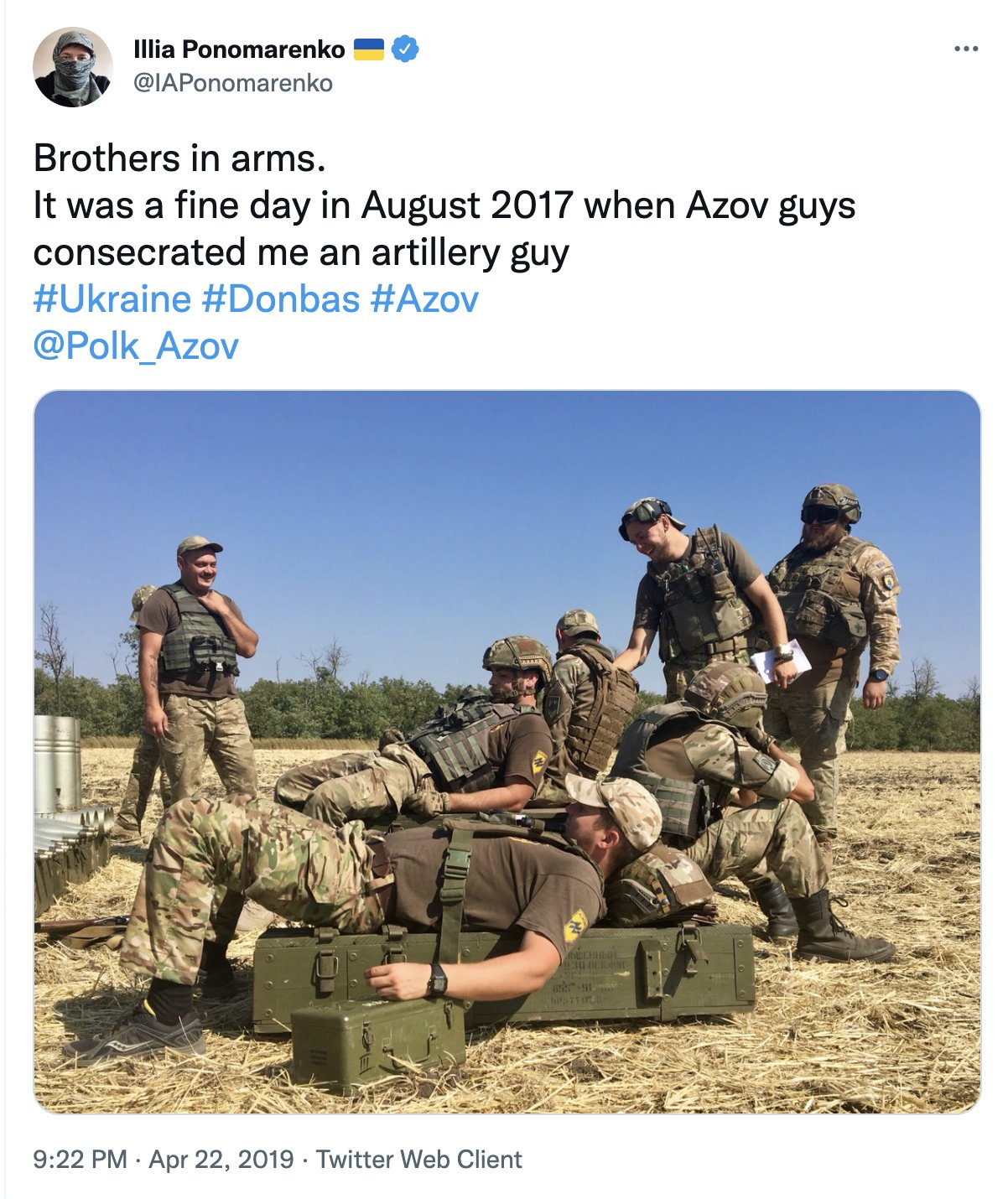 OK, that’s enough “inoculation” for now. We don’t want to expose ourselves to too much of that stuff, or we’re liable to end up supporting the wrong Nazis.

Fortunately, the United Forces of Goodness (and Freedom) are censoring most of it anyway, and instead are feeding us sentimental stories, like the one about “the Ghost of Kyiv,” the completely fictional Ukrainian fighter pilot who shot down the entire Putin-Nazi Air Force while delivering pithy one-liners like Bruce Willis in the Die Hard films!

As The New York Times explained, fake stories like that, or the one about the Snake Island martyrs who told the Russians to “go fuck themselves,” and then were genocided by a Putin-Nazi kill squad, but then turned up alive a few days later, are not disinformation, and even if they are, it doesn’t matter, because they’re good for morale!

And that’s the important thing, after all. If we’re ever going to defeat these Putin-Nazis, and the imaginary apocalyptic plague, and Trump, and terrorism, and domestic extremism, and climate change, and racism, and whatever, we need to keep the Western masses whipped up into a perpetual state of utterly mindless, hate-drunk hysteria like an eternal episode of the Two Minutes Hate from Orwell’s 1984.

It doesn’t really matter who the masses are being told to hate this week … the Russians, the Unvaccinated, the Terrorists, the Populists, the Assad-Apologists, the Conspiracy Theorists, the Anti-Vaxxers, the Disinformationists … or whoever. In the end, there is only one enemy, the enemy of the United Forces of Goodness, the enemy of the unaccountable, supranational global-capitalist empire (or “GloboCap” as I like to call it).

This multiplicitous, Goldstein-like enemy of GloboCap is an internal enemy. GloboCap has no external enemies. It dominates the entire planet. It is one big global-capitalist world. It has been for the last 30 years or so. Most of us can’t quite get our heads around that bit of reality yet, so we still see the world as a competition between sovereign nation states, like the USA and Russia. It is not. Yes, there are still nation states, and they compete with each other (like corporations compete for advantage within the system they comprise), but the fundamental conflict of our age is a global counter-insurgency op.

What we’ve been experiencing for the last 30 years, over and over, in many different forms, is a globally hegemonic power system carrying out a “Clear and Hold” operation. GloboCap has been gradually destabilizing, restructuring, and privatizing the post-Cold-War world, first, in Eastern Europe and the Greater Middle East, and, more recently, here at home in the Western nations. For those not familiar with the term “Clear and Hold” …

“Clear and hold is a counter-insurgency strategy in which military personnel clear an area of guerrillas or other insurgents, and then keep the area clear of insurgents while winning the support of the populace for the government and its policies.”

Take a minute and think about that. Think about the last two years. Think about the last 30 years. Seriously, just as an exercise, imagine GloboCap as an occupying army and the entire world as the territory it is occupying. Imagine GloboCap establishing control, targeting and neutralizing a variety of insurgencies … any insurgency, regardless of its nature, any and all resistance to its occupation, or lack of support for its “government and policies.” It does not matter who the insurgents are … diehard communists, Islamic fundamentalists, nationalists, populists … it makes no difference. The occupation couldn’t care less what they believe in or why they’re resisting. The objective of the op is to control the territory and get the populace on board with the new “reality.”

Welcome to the new reality … a “reality” in which “history has stopped [and] nothing exists except an endless present in which the Party is always right.” Yes, I know you are sick of me quoting Orwell, but, given the circumstances, I cannot help it. Just reflect on how seamlessly GloboCap segued from the Apocalyptic Pandemic narrative back to the Putin-Nazi narrative, which had seamlessly replaced the War on Terror narrative in the Summer of 2016, and how instantly the New Normals switched from hating “the Unvaccinated” to hating the Russians, and then scold me again for quoting Orwell.

Look, I hate to disappoint Edward Norton and millions of other fanatical liberals, but the USA is not going to war with Russia, or not intentionally in any event. Russia has ballistic missiles with thermonuclear warheads on them. This isn’t a rerun of World War II. And it isn’t World War III, or the Cold War redux. That is not what is happening in the Ukraine.

What is happening in Ukraine is, Russia is not playing ball. For some reason, it does not want to be destabilized, and restructured, and privatized by GloboCap. It is acting like a sovereign nation state … which it is, and isn’t, which paradoxical fact GloboCap is trying to impress on Russia, just as countries throughout the global-capitalist empire impressed it on us for the past two years, as Trudeau impressed it on those protesters in Ottawa when he cancelled their rights and went full-fascist.

What is happening is, Russia is rebelling against GloboCap, and, unlike the other rebellious parties that GloboCap has been dealing with recently, Russia has thermonuclear weapons.

I’m not trying to tell you who to root for. Root for GloboCap if you want. I’m just urging you, before you fly over to “Kyiv” and join the fight against the Putin-Nazis, or make a jackass of yourself on the Internet shrieking for nuclear Armageddon, or fire-bomb your local Russian restaurant, or beat the crap out of some Russian-looking person, to maybe take a moment or two and try to understand what is actually going on, and who the major players actually are, and where GloboCap’s efforts to “clear and hold” the entire planet are inexorably taking us.

I know, that’s a lot to ask these days, but I can’t help thinking about all those nukes, and the fallibility of human beings, and yes, all the non-Nazi Ukrainians who are going to needlessly suffer and die while we watch the action on TV, and root for our favorite characters to win, and so on … as if it were a fucking movie. The preceding essay is entirely the work of our in-house satirist and self-appointed political pundit, CJ Hopkins, and does not necessarily reflect the views and opinions of the Consent Factory, Inc., its staff, or any of its agents, subsidiaries, or assigns. If, for whatever inexplicable reason, you appreciate Mr. Hopkins’ work and would like to support it, please go to his Substack page, or his Patreon page, or send your contribution to his PayPal account, so that maybe he’ll stop coming around our offices trying to hit our staff up for money. Alternatively, you could purchase his satirical dystopian sci-fi novel, Zone 23, or Volume I and II of his Consent Factory Essays, or any of his subversive stage plays, which won some awards in Great Britain and Australia. If you do not appreciate Mr. Hopkins’ work and would like to write him an abusive email, feel free to contact him directly.