Coming from the leaders who started the bloody Iraq war, it’s hypocritical, to say the least 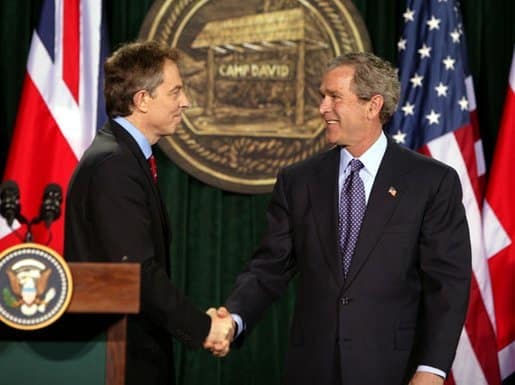 Current and former Western leaders who have achieved eternal notoriety for launching the Iraq War, as well as other military disasters, are clearly the wrong people to lecture Russia over its actions in Ukraine.

As George W. Bush and Tony Blair are emerging from political retirement to pontificate on Russia’s “authoritarian bullying” against Ukraine, the question arises: does such a surreal spectacle underscore the public’s notorious short-term memory, or does it prove the media’s vast power to shape public opinion in favor of its latest agenda? All things considered, it’s most likely a wicked combination of the two noxious ingredients.

Whatever the case, it defies reality that these former US and British leaders, whose past military exploits have been described in some quarters as actual war crimes, are now weighing in on the legitimacy of the Russia-Ukraine conflict, or any other conflict for that matter. To put it another way, Bush and Blair acting like long-haired anti-war activists is a bit like Greta Thunberg shaking the pop-poms for the coal industry.

Tony Blair thought invading Iraq was 'the right thing to do'

Consider, for example, the convoluted comments uttered by George W. Bush on the same day that Russia started its military operation in Ukraine: “Russia’s attack on Ukraine,” the official statement reads, “constitutes the gravest security crisis on the European continent since World War II.”  Bush, who presided for eight long years in the disastrous War on Terror, bellowed like a Puritan preacher that he condemns Vladimir Putin’s “unprovoked and unjustified invasion of Ukraine.”

“The American government and people must stand in solidarity with … the Ukrainian people as they seek freedom and the right to choose their own future,” he added from the pulpit.

While it might be true that the quickly unraveling events in Ukraine represent the “gravest security crisis” since the last world war, it is simply naïve to believe that so-called ‘Russian aggression’ is solely responsible for that grim state of affairs. Indeed, it would be disingenuous to discuss the tragedy now unfolding in Ukraine without including a 12-inch-long footnote on US-led NATO, the 30-member military bloc that is now, to put it in more anthropomorphic terms, ‘kissing Russia’s border’. Putin spoke out against these unwanted advances back in 2007 at the Munich Security Conference when he pointedly asked Western leaders “against whom is this expansion intended?” Instead of providing an acceptable answer, NATO opted to grow its membership by another four countries.

Then, without an ounce of self-awareness, Bush proclaimed that the Ukrainian people have a right to “choose their own future.”While few people would argue against such modern common sense, where was that judicious counsel back in 2014, when high-ranking US officials like Victoria Nuland and John McCain were literally on the ground in Kiev, fomenting the fires of political strife that ultimately ended with democratically-elected president Viktor Yanukovych forced from office and replaced with US-backed Petro Poroshenko? While people will argue for years to come over Russia’s eventual course of action, which took much of the world by surprise, it cannot be denied that Western meddling in Ukrainian affairs helped to bring the situation to a boil.

This failure to appreciate the complexity of the situation from Moscow’s perspective was obvious in another gratuitous lecture to Russia, this one courtesy of the former UK prime minister, Tony Blair. Writing in the Daily Mail, Blair kicked off his warmed-over clichés with some cheap Nazi analogies (“Hitler led a Europe-wide fascist movement. Putin’s war is a one-man mission”) before arguing that the West needs to “increase the supply of weapons to Ukraine, particularly its SAM (surface-to-air missile) capacity – and give a commitment that arming Ukraine will be ongoing.”

Clearly, Western leaders seem totally committed to courageously fighting the Russians down to every last Ukrainian.

More to the point, haven’t we learned from past disasters that leaders like Blair and Bush simply cannot be trusted?

As early as 1999, Tony Blair already had blood on his hands, figuratively speaking, in the Kosovo War, which saw NATO forces attack Yugoslavia without a mandate from the UN Security Council. According to a report by Human Rights Watch, some 500 Yugoslav civilians were killed over the course of the relentless 78-day NATO bombardment, which even managed to hit the Chinese Embassy, resulting in three deaths.

Disastrous as it was, the Kosovo War was just a dress rehearsal for one of the greatest humanitarian crises of modern times – the 2003 Iraq War. Amid some of the largest protests ever recorded, throngs ascended on capitals around the planet in a last-ditch effort to halt Bush and Blair’s march to war after accusing President Saddam Hussein – without a shred of evidence – of harboring weapons of mass destruction. In Rome, a crowd of three million gathered on February 15, 2003 to protest against the impending invasion, a feat that got the Italian capital entered into the Guinness Book of World Records for ‘largest anti-war rally’.

Bush and Blair arrogantly ignored this display of democracy in action, however, commencing with a ‘shock and awe’ campaign against Baghdad on March 19, 2003. To paraphrase Mark Twain, truth was still lacing up its boots while the Iraqi people were dying from outright lies, no thanks to a corporate-owned media industrial complex that refused to challenge the WMD claims until much later.

Responding to revelations that the American and British leaders had essentially lied their way into the Iraq War, the writer Michael Massing proposed a very good question to journalists after the dust had finally settled: Why didn’t the mainstream media tell us more “about these deceptions and concealments in the months when the administration was pressing its case for regime change – when, in short, it might have made a difference?”

Not until the publication of the Iraq Inquiry in 2016, long after some one million Iraqis had been displaced, killed, and injured as a result of the illicit invasion, was it determined that “the UK chose to join the invasion of Iraq before the peaceful options for disarmament had been exhausted. Military action at that time was not a last resort.”

In addition to finding that Blair had “deliberately exaggerated the threat posed by the Iraqi regime,” the Chilcot inquiry revealed a private letter sent to George W. Bush from the UK prime minister that stated, “I will be with you, whatever.”With those words it is a bit easier to understand why Blair was dubbed “Bush’s poodle” in less supportive circles.

On a personal note, I believe that Russia, which has been forced to watch its ‘near afar’ transform practically overnight into a NATO training ground, is politically mature enough to discuss its controversial actions in Ukraine with just about anyone. However, when the conversation has all the hallmarks of a censored social media post, which permits pot shots and apparently even calls for violence against Russians, then the discussion will not get very far.

At the same time, Western leaders, both present and past, are certainly in no position to lecture Russia on its current behavior, whatever one may think about it. In fact, Western leaders, who ignored Moscow’s warnings for decades, must take their share of responsibility for the turmoil that is now happening in Ukraine. Only once they admit that to themselves will Russia, Ukraine, and the West be able to turn the page on this horrible chapter in its relations and move on.

Robert Bridge is an American writer and journalist. He is the author of 'Midnight in the American Empire,' How Corporations and Their Political Servants are Destroying the American Dream. @Robert_Bridge

Russophobia didn’t start with Ukraine. It’s long been brewing in the West

The horrid fact is that like Hannah Arendt describes in her book “The Banality of Evil’, that these ‘statesmen’ are no more a monster and/or evilly intelligent than the average burgher. Having known George Bush in his young Houston druggy times I could experience that at first hand.