April 27, 2022
Please make sure these dispatches reach as many readers as possible. Share with kin, friends and workmates and ask them to do likewise. 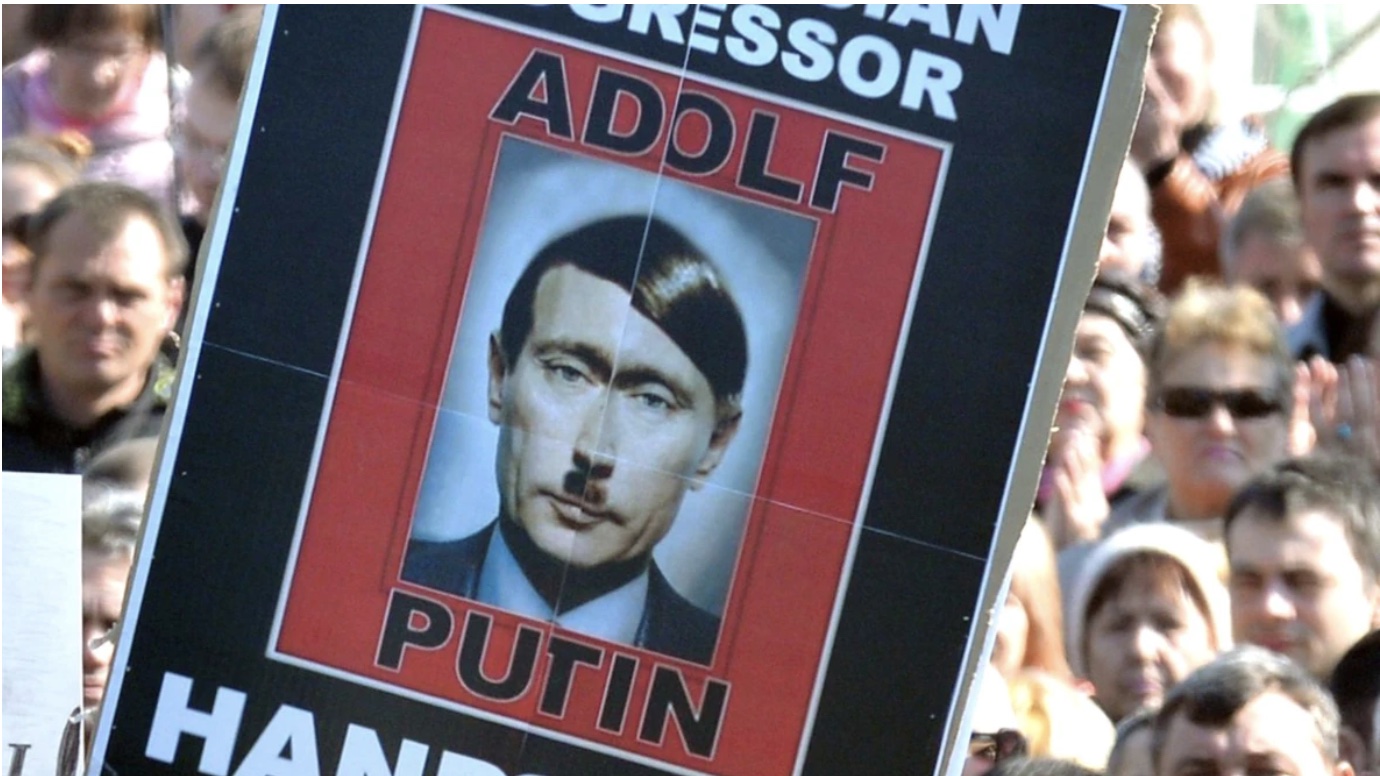 Firstly it was required. Initially by NATO that required an enemy after it lost the Soviet Union.

With Putin there was a short honeymoon period from 2000 to 2007. If you look at this period you will find Putin and his wife meeting the royal family of Britain and George W. Bush stating he looked into Putin's eyes and found a decent human being. However, the western elite opinion reversed in 2007 when Putin made his famous Munich speech (which you can find in full and with English subtitles or vocal translation on YouTube).

In his Munich speech to the assembled political elites of the western world he basically told them that he was not buying into the concept of the USA and its allies running the planet as a unipolar entity. He said a lot of conciliatory things in that address too, but this appears to be almost exclusively what those western dignitaries took home with them... Putin is not one of us.

If you are not one of us then in western elite think (as George W. Bush also notably said) you are 'one of them', an enemy. And so, as quickly as that, Putin became an enemy of the West. Even though Putin had been one of the first world leaders to phone Dubya after 9/11, if not the very first, he was still an enemy and became in fact THE enemy. Despite broaching the possibility of Russia joining both the EU and NATO and speaking of wishing Russia could take her place in a 'common European home' nothing could change his status after that February day in Munich in 2007.

It was after 2007 that all the put-down, accusatory books and articles began to appear about Putin. He was accused of almost everything imaginable from unimaginable robberies, corruption and murder. Please note however that none of the plethoras of accusations made it as far as a court of law... anywhere. These were assertions based on a variety of guilt-by-association links and other even vaguer connections none of which came anywhere close to being proven.

But mud sticks as they say and the mud-slingers have had a field day from 2007 to the present. It was all one-way traffic of course and the stories came thick and fast. Mass media across the western world played every sensational story for all they were worth with hardly a word gainsaying these accusations. I leave it to you and your knowledge of how repeated accusations without contradictions to their narrative tend to stick, especially where someone's reputation is concerned.

So, Putin became the world's most slandered man in effect amounting to a figure that could easily be transposed with a figure such as Hitler. From 2007 to the present day these two effects played out incessantly, 1) Putin was accused of unconscionable acts of criminality and 2) Not a word was heard in his defence or even cautioning that these were only suppositions and accusations that were lacking solid proof (or that the sources were themselves proven whores and criminals!).

When it came to the current crisis in Ukraine all the aforementioned held true in spades. The western world was fully groomed concerning the Machiavellian monster and reincarnated Hitler who was the murderous, crooked despot who ruled Russia with a fist of iron. Why would anyone think otherwise? Those who headline surfed and drank in western mainstream news as holy writ certainly would not. Only those who were curious enough to investigate the man in any detail remained skeptical and many became totally convinced they had been lied through the teeth about him.

What about Russia itself. As stated at the top of this commentary NATO was in big trouble and every career ladder within it was shaky with myriad positions at risk and an entire matrix of connections intertwined with European elite entities was at risk of dissolving like temporary stitches after an operation. The op had to go on, infection or not, scar or not... NATO could not be allowed to fall out of existence.

Russia was the only candidate for the job of replacement of the Soviet Union for NATO. Truly no other nation fitted the bill and even now, though the NATO elites have expressed a wish to involve themselves in containing China that is seen as a bit of a stretch and Russia (especially now after its Ukraine intervention) still very much fits the bill.

That brings me to the last eight years with the insurrection in Ukraine deposing the democratically elected president and government there in 2014 and Russia's subsequent acceptance of Crimea after a speedily organised referendum. Russia went from being a subject of much criticism over certain actions deemed authoritarian and of dubious merit such as the hard-fought war in Chechnya to becoming an object of instant and grievous controversy.

For western populations, all was made very simple. Russia had "invaded" Ukraine. Then, when the people of the Donbass reacted in horror to their democratic right to choose a president and government being removed on Maidan Square, Kiev and began taking over administrative buildings, things moved to an even more serious level of one-sided narratives depicting Russia as being behind everything going on there.

I watched all this at the time and it was then with the utterly partial reporting of events in the Donbass that I realised something very wrong was going on. The blame for almost every event was being placed on Russian shoulders whereas the great numbers of civilians dying due to random mortar shells fired into Donbass urban conurbations by Ukrainians were somehow Russia's fault too. Something VERY fishy was going on.

I began to realise in fact that a very real world war was in fact going on. The 'Get Putin!' campaign had been seven long years in operation by 2014 and from then until today there was ever more grist for its mill.

Putin and Russia became the reason why Hillary Clinton "lost" to Donald Trump in 2016 and for four long years once again the two whipping boy entities served their purpose. Once again the message was incessant and wholly negative. What were accusations and suppositions only soon transmogrified and lost any qualifying statements within what appeared to be a matter of minutes. Allegations became spoken of as facts at almost lightning speed.

Once again no one in the mainstream would utter a single word of doubt. The guilt of Putin and Russia was simply taken for granted.

Then it came to the point where the agreement of Kiev to make certain changes was accomplished. At Minsk in 2015 the then authorities in Ukraine agreed that they would speak directly to the leaders of the two breakaway republics seeking autonomy within Ukraine. (Putin had refused their request to join the Russian Federation and told them to seek greater autonomy to preserve their at-risk language, culture and historical affiliations with Russia). In addition, Kiev had promised to provide special status to the republics providing them with the autonomy they sought.

Seven long years then passed with Kiev failing to implement the above steps they had signed up to and which were ratified at the United Nations. Ultimately, a month or so before Putin initiated Russia's Ukrainian intervention Kiev stated it was no longer interested in implementing them. Instead, it was going to seek a military solution, regain its nuclear status, train with NATO troops and re-arm massively with the help also of NATO becoming a de facto NATO state.

At this time also Russia made demands upon NATO that it would never make Ukraine (nor Georgia) a NATO state and that all NATO forces and weaponry be removed to positions they had had many years before when Gorbachev had been assured NATO would not move an inch further east if the then Soviet Union did not create any barriers to the unification of Germany. The USA and NATO essentially stonewalled and more, then Kiev stated it wanted nothing more to do with the Minsk Agreements.

The patience of Putin and Russia was at an end. And especially so when word came in from Russian intelligence that Kiev planned an imminent attack on the two republics. (Kiev had been progressively building up its forces in the Donbass since the previous Spring.) So it was that Putin, as requested by the Russian parliament, the Duma, after receiving the plea from the republics, recognised them as sovereign entities that Russia agreed to protect.

Things moved quickly from that point on and soon Russia's 'special military operation' was underway, the invasion of Ukraine... putting the lid on everything that went on before, now there could be no possible room for doubt, all the conditioning of the western mind was about to pay off and a whole host of accusations could be made, almost without limit, many of them suggested with alacrity by the Ukrainians.

Putin was evil. Russia was guilty of horrendous war crimes and crimes against humanity. Putin and his generals were waking each day licking their lips wondering how many babies, school kids, hospital patients and everyday civilians they could kill that day. The circle of demonization was complete, a fully self-generating belief-bubble of pejorative terms had been created and not a single western soul in the mainstream was ever going to burst it.

THIS IS HOW PUTIN BECAME HITLER & RUSSIA NAZI GERMANY.

All search-engines are effectively controlled by the U.S. Government.

The US does not care two figs about Europe and by encouraging NATO to fight Russia by supplying enormous quantities of weaponry (like the US does via NATO), they endanger Western Europe to a nuclear engagement with Russia. Like what happens to Ukrainians (despite pious expressions of sympathy), the US is fine with a renewed European conflict, which may destroy millions of inhabitants.