THE WORLD MUST GET RID OF NATO AND NEUTRALISE US POWER TO MEDDLE IN EVERYONE'S AFFAIRS. 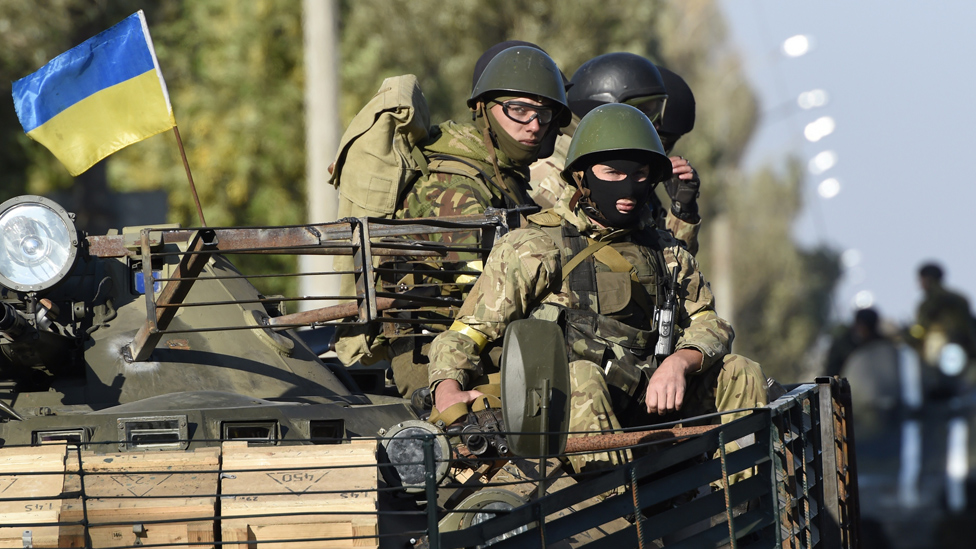 Ukrops soldiers on the way to the front. In a few more days they may have to take a bus or a taxi.

Iraq had no nuclear weapons, and is 6,000 miles from America. It also had no military alliance, no alliance at all, with any country that endangers America. So, why did America invade it?

Ukraine has no nuclear weapons, but it seeks them from America and is backed to the hilt by America and by its anti-Russian NATO military alliance. And Ukraine borders on Russia and has the nearest border to Moscow; and, if Ukraine is admitted into NATO it would be able to allow its dream of having U.S. nuclear missiles against Moscow placed there only a five-minute striking-distance away from blitz-obliterating Moscow and maybe thereby disabling all of Russia’s retaliatory capability so as to allow America then to take over and rule by diktat the entire world.

End NATO Now! It is the greatest-possible threat to there being a World War III. It turns more and more countries into tripwires for WW III — and into Russian (and now also into Chinese) military targets. But something exists which is as evil as NATO, and it’s the U.S.-and-allied ‘news’-media that fool their publics into accepting and even endorsing this horrific global injustice that sustains NATO and that could very likely produce a Third World War, which would kill billions and harm everyone.

End NATO Now! It is the greatest-possible threat to there being a World War III. It turns more and more countries into tripwires for WW III — and into Russian (and now also into Chinese) military targets. But something exists which is as evil as NATO, and it’s the U.S.-and-allied ‘news’-media that fool their publics into accepting and even endorsing this horrific global injustice that sustains NATO and that could very likely produce a Third World War, which would kill billions and harm everyone.

Without that lying ‘news’-media, constantly deceiving the public in U.S.-and-allied nations, there wouldn’t have been any U.S.-and-allied invasion-and-destruction of Iraq. It was based entirely on lies. America’s President (George W. Bush), UK’s leader Tony Blair, and all of the controlling investors in each of the U.S.-and-allied mainstream ‘news’-media that served as stenographic media-megaphones for their murderous lies and horrific aggressions, were (and are) international war-criminals, even though they will never be prosecuted.

Similarly, the build-up now toward WW III is also based entirely upon lies. Joe Biden, Boris Johnson, and the other international gangsters who are bringing this about — and their media barons — are even more dangerous international war-criminals than Bush and his gang were (because WW III would be orders-of-magnitude worse a crime than even the thoroughly unjustified invasion of Iraq was).

The lies are so blatant that no one has ever provided any evidence of anything being false (except an erroneous “2013” instead of “2014”, an unintentional slip-up) in this 11-minute documentary about Barack Obama’s 2014 coup that grabbed Ukraine for the U.S. regime. And that there have also been no denials of the 4 January 2016 news-report in Russia (by an anti-Putin, and pro-Ukraine, pro-U.S., site, no less) titled (in translation) “HOW THE CIA ACTUALLY CONTROLS THE SBU” (the “SBU” being the Security Bureau of Ukraine). It’s just a fact: U.S.-and-allied ‘news’-media routinely lie through their teeth and hide the crucial international realities from the public, instead of publishing those realities to the public.

This documented news report and commentary is being sent to nearly 300 media including all of the mainstream ones in U.S. and UK, free for them to publish if they have the conscience and the courage to do so. Any that don’t publish it are thereby proving themselves to be enemies of the global public. Because the publics in U.S.-and-allied countries need to become disillusioned now, very fast.

Deadly violence breaks out in Paris after Macron’s re-election

The US assimilated many left-over scientists and technicians from the Nazi reign in Germany after 1945. One of which was the method of spreading governmental propaganda throughout every household. Then it was the radio, now it is not just the radio and newspapers but mainly television and recently the Internet. Improved communications have speeded up the cleverly distorted governmental information to which the public is allowed. In the duopoly of political factions, a fake division of content is used to make the public believe that this is a democracy for which divergent opinions are the building blocks. In fact the… Read more »