America is a police state with many layers of "security". And surveillance is everywhere.

CNN and the New York Times let the head of the Department of Homeland Security lie about the institution’s established record of spying on US citizens, echoing his false claims.

These top media outlets amplified this falsehood as part of an attempt to defend the US government’s de facto Ministry of Truth, the new “Disinformation Governance Board” that the Department of Homeland (DHS) has created in order to censor supposed “disinformation” that it deems a threat to US national security.

DHS, which was created after the September 11, 2001 attacks to oversee the so-called War on Terror, is notorious for its brutal and authoritarian tactics.

The fact that DHS has surveilled American journalists, protesters, and even critical politicians is well documented. This is an undeniable matter of public record.

But CNN and the New York Times allowed the secretary of the Department of Homeland Security, Alejandro Mayorkas, to lie about this objective fact, and did not push back in any way.

CNN echoed a blatant lie from the Department of Homeland Security, falsely claiming it does not monitor Americans.

In reality, DHS has for years spied on US journalists and protesters.

CNN host Dana Bash sat down with Mayorkas on May 1, in an interview titled “Bash presses Mayorkas about ‘1984’ comparisons to disinformation board.”

The CNN segment amounted to a defense of DHS’ Disinformation Governance Board, which Mayorkas minimized as a “small working group within the Department of Homeland Security,” supposedly with limited power.

“Will American citizens be monitored?” Bash asked, in regard to this disinformation board.

“We in the Department of Homeland Security don’t monitor American citizens,” he insisted.

But instead of pushing back against this clear lie, the CNN host echoed the DHS secretary’s totally false claim.

“You don’t,” Bash replied in agreement. “But will this board change that?” she added.

This is all completely, categorically false.

The Intercept obtained documents through a Freedom of Information Act request showing how DHS has spied on activists protesting police brutality in the Black Lives Matter movement since at least 2014.

NBC 7 obtained DHS documents in 2019 that showed that “the U.S. government created a secret database of activists, journalists, and social media influencers tied to the migrant caravan and in some cases, placed alerts on their passports.”

In 2020, the New York Times itself reported that the “Department of Homeland Security deployed helicopters, airplanes and drones over 15 cities where demonstrators gathered to protest the death of George Floyd.”

That same year, the Washington Post revealed that the “Department of Homeland Security has compiled ‘intelligence reports’ about the work of American journalists covering protests.”

This led Oregon lawmakers to publicly demand “answers from the Department of Homeland Security, following new reports that the department spied on Portland protesters’ phones.”

The ACLU even sued the department for spying on journalists and violating their civil liberties.

For nearly 20 years, many of our warnings about DHS have become tragic realities.

It's past time to dismantle this rogue agency. https://t.co/bZHD0reU0O

Some current and former DHS officials have tried to put the blame for these authoritarian policies solely on Donald Trump, but the reality is this surveillance started long before Trump entered office in 2017 and has continued since he left in 2021.

Yahoo News obtained documents in 2022 showing that the “controversial unit of Customs and Border Protection that trawled through the travel and financial records of journalists and lawmakers is still monitoring Americans.”

Customs and Border Protection (CBP) is a branch of the Department of Homeland Security.

CBP unit that spied on journalists and lawmakers is monitoring American protesters: https://t.co/tr9UpgoSsO

Instead of acknowledging any of these facts, CNN and its host Dana Bash simply echoed the lies of the DHS secretary.

And CNN was not the only major media outlet that spread this US government disinformation.

The newspaper-of-recored published an article on May 2 titled “Partisan Fight Breaks Out Over New Disinformation Board,” which was really a long-winded defense of Washington’s de facto Ministry of Truth.

The Times quoted Mayorkas’ claim, “We in the Department of Homeland Security don’t monitor American citizens.”

The top media outlet did not push back against this US government disinformation, or point out that its own reporting had shown this claim to be false.

The New York Times echoes the false claim that DHS does not spy on American, without any pushback

The Times article was co-written by Steven Lee Myers and Zolan Kanno-Youngs.

Kanno-Youngs had in fact authored the June 2020 New York Times article revealing that the Department of Homeland Security deployed helicopters, airplanes, and drones to spy on Black Lives Matter protesters in 15 cities.

Yet less than two years after acknowledging this fact, Kanno-Youngs and his colleagues at the Times had returned to carrying water for DHS and amplifying its false claims.

The Times reprinted the comments Mayorkas’ made on CNN insisting that the Disinformation Governance Board is needed to counter supposed “disinformation from Russia, China, Iran.”

Mayorkas said the board will censor “disinformation that creates a threat to the security of the homeland.”

Both the CNN and New York Times reports gave the false impression that only conservative Republicans are opposed to the Disinformation Governance Board. In fact many journalists and activists on the left are deeply opposed to this de facto Ministry of Truth.

But these top media outlets deceptively portrayed the controversy as simply another battle in a US liberal-conservative culture war.

There was deep irony in the New York Times publishing blatant US government disinformation in an article warning about the “threat” of disinformation supposedly spread by Russia, China, and Iran.

In his interview on CNN, Mayorkas claimed, “The board does not have any operational authority or capability. What it will do is gather together best practices in addressing the threat of disinformation from foreign state adversaries, from the cartels, and disseminate those best practices to the operators that have been executing in addressing this threat for years.”

This appeared to be the DHS director’s roundabout way of saying that the board will pressure social media platforms and Big Tech corporations to censor what it calls “disinformation.”

DHS can thus claim that it is not directly censoring people, that it is instead private companies censoring them, while failing to mention that they are doing so under US government pressure.

Mayorkas also referred to the director of the Disinformation Governance Board, Nina Jankowicz, as “eminently qualified, a renowned expert in the field of disinformation.”

In reality, Jankowicz is an avowed cold warrior who smears independent anti-war US media outlets as supposed “Russian disinfo,” and has called WikiLeaks “scum.”

The authoritarian Department of Homeland Security (DHS) that oversaw the War on Terror created a “Disinformation Governance Board,” led by information warrior Nina Jankowicz, who smears independent US media as “Russian disinfo” and called @WikiLeaks "scum"https://t.co/V7T9XnIlBI

Multipolarista documented how Jankowicz got her start professionally running regime-change operations targeting Russia for CIA front the National Democratic Institute (NDI), a branch of the US government’s infamous National Endowment for Democracy (NED).

In its report defending the DHS disinformation board, the New York Times euphemistically claimed the NDI and NED “promote democratic governance abroad.”

In reality, these US government bodies exist to fund opposition groups and destabilize foreign countries targeted by Washington for regime change. The NED’s own co-founder admitted that the organization is a CIA cutout.

In 2016, Jankowicz described herself as “someone who has made a career in democracy assistance.” She later rebranded as a “disinformation expert” after the election of Donald Trump.

Jankowicz has gone out of her way to target independent American journalists who criticize US foreign policy, trying to link them to Russia to justify censoring them.

DHS Secretary Mayorkas, for his part, concluded his interview with CNN emphasizing that the Joe Biden administration has continued the Trump administration’s aggressive crackdown on immigration.

“Our border is not open,” he stressed.

When asked what his message was to migrants and refugees, Mayorkas emphasized, “Do not come.” 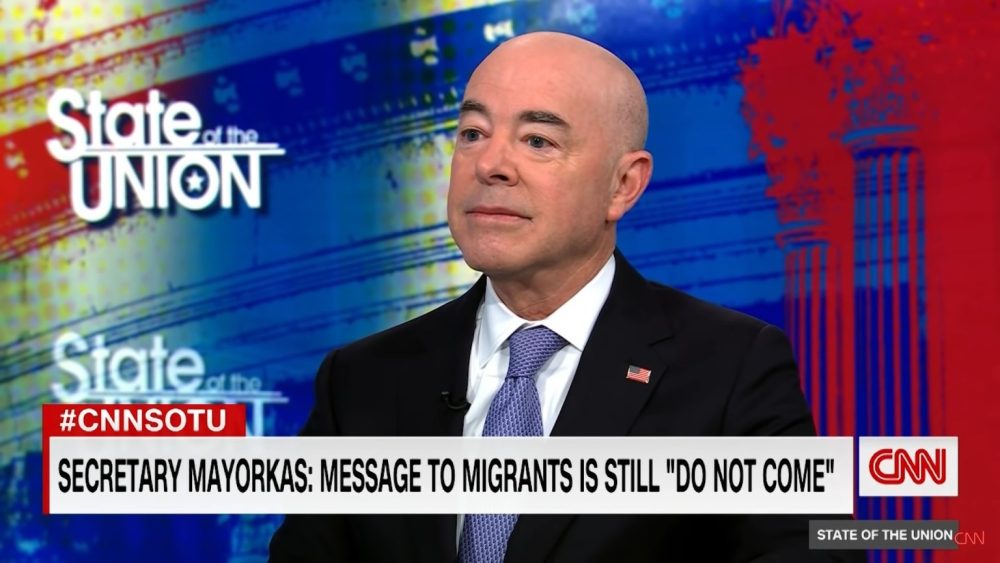 While fueling Ukraine proxy war, NATO and EU are militarizing the Balkans