Home IMPERATIVE The Mainstream Worldview Is Self-Evidently Bullshit: Notes From The Edge Of The Narrative Matrix

The Mainstream Worldview Is Self-Evidently Bullshit: Notes From The Edge Of The Narrative Matrix

"You can tell the mainstream worldview is bullshit just by looking at its fruits. We’re killing our biosphere to serve an economic system that’s creating greater and greater inequality while wars rage and nuclear brinkmanship threatens to wipe us all out and corruption rules the earth...  The world is as it is because the way the majority of people in the most influential nations think, act and vote is being continuously manipulated by the powerful, for the powerful. The mainstream worldview is just a giant bundle of power-serving lies and manipulations..." 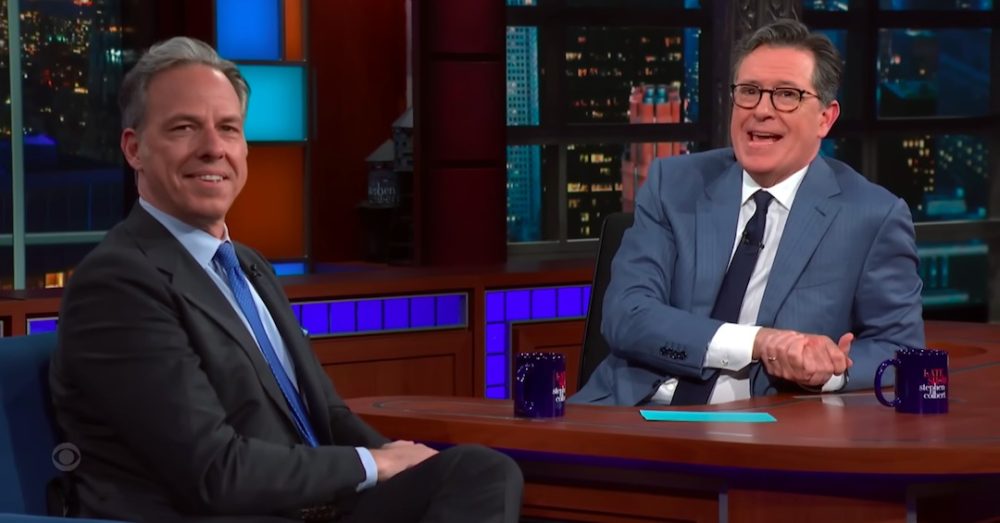 Media criminals Jake Tapper and Stephen Colbert—lavishly paid to sell the Western billionaires' lethal agenda. "Highlighting their errors is harassment, criticizing them on social media is cyberbullying, calling out their sleaziness is Trumpian."

They’ve lied about every war, and they’ve openly acknowledged lying about this very war, but you’re a Kremlin agent if you say they’re lying to us about this war.

The mainstream worldview is self-evidently bullshit. If our media and education systems were telling us the truth about the world and our “democratic” systems actually worked, our society would be arranged to serve the interests of the many rather than an elite few.

You can tell the mainstream worldview is bullshit just by looking at its fruits. We’re killing our biosphere to serve an economic system that’s creating greater and greater inequality while wars rage and nuclear brinkmanship threatens to wipe us all out and corruption rules the earth.

The world is as it is because the way the majority of people in the most influential nations think, act and vote is being continuously manipulated by the powerful, for the powerful. The mainstream worldview is just a giant bundle of power-serving lies and manipulations.

Remember when everyone who warned this exact thing would happen was called a Putin apologist https://t.co/Ni6nj0f54S

[Perfidy writ large]
The thing about the entirely predictable admission by Biden officials that sanctions are hurting ordinary Russians a lot more than they’re hurting the Kremlin is that the US empire is fine with that. The US empire doesn’t use sanctions to punish leaders, it uses them to foment unrest and hopefully spark a coup or civil war.

During an interview in 2019 then-Secretary of State Mike Pompeo effectively admitted that this is what the US empire uses sanctions for: not to influence the behavior of the government, but to coerce the people into ousting their government. State Department documents from 1960 show the US government discussing this exact same strategy regarding economic warfare against Cuba. This is a longstanding practice.

Ordinary citizens are assigned full responsibility for their social and financial struggles and their privacy rights are being eaten away. Powerful people are never held accountable for their immensely destructive decisions and they are protected by a wall of government secrecy.

Accountability and transparency should have a directly proportional relationship with power: the more power you have the more consequences you face for your actions, and the less privacy you’re entitled to. In our society it’s literally the exact opposite. It’s completely backward.

Just as western plutocrats and politicians want all the power and none of the responsibility, so too do their mouthpieces in the mainstream media. Highlighting their errors is harassment, criticizing them on social media is cyberbullying, calling out their sleaziness is Trumpian.

These people are broadly despised yet believe they’re doing a fantastic job. They insulate themselves in tightly cloistered self-validating echo chambers, so a member of the common riff raff tweeting harsh truths at them is experienced as an unexpected assault.

65% of journalists say news organizations do a very or somewhat good job reporting the news accurately. 35% of Americans agree, while 43% say journalists do a bad job of this. https://t.co/giX4QQlTfH pic.twitter.com/tky7MG5kRF

This class participates in an ongoing propaganda operation to manufacture consent for the status quo, and without them the world would look completely different. Their voices are orders of magnitude more powerful than ordinary people’s, yet they want no responsibility for this role.

If I had the Thanos glove I wouldn’t use it to impose my personal ideology on the world, I’d use it to make all the secrets of the powerful visible to everyone and democratize information sharing so people could decide for themselves what course of action to take in response. All government secrets, all corporate and financial secrets, all the secrets of media institutions, would all be immediately visible and placed in front of everyone’s eyes. Then everyone gets a device with access to a global public forum to talk about everything they’ve learned.

I’d just let people see everything and then choose their own adventure. Maybe they’d choose to create the kind of egalitarian society I’d like to see, maybe they’d create something else. It’s up to them. All I did was end the subversion of their personal and collective sovereignty.

In all the controversy about whether the US should be associating itself with a murderous tyrannical regime like Saudi Arabia please don’t forget that the US is far more murderous and tyrannical than Saudi Arabia by an extremely massive margin.

“Oh noes, Biden should be embarrassed to be seen with a tyrant like MBS!”

Bitch, MBS should be embarrassed to be seen with a tyrant like Joe Biden.

Conservatives will happily make kids pledge allegiance to flag and republic every day at school and sit in class learning about how they live in the greatest country on earth, then they’ll freak out about LGBT issues because “the children are being indoctrinated.”

Mainstream western proponents of “democratic socialism” never call for an end to imperialism because they are fully aware that their version of “socialism” is entirely dependent upon imperialist domination and exploitation.

People who believe humanity can make positive changes toward health and harmony tend to be people who’ve made such changes in their own lives. People who believe human nature is selfish and destructive tend to be selfish and destructive people. We’re just describing ourselves. We’re describing the insides of our own reality tunnels and then dressing it up as some grand knowledge about objective reality.

Really none of us know humanity’s fate, because our thinking about human potential and human nature is filtered through our personal experience of humanity from the inside. It is a mystery, and we can just let it be a mystery.

Luckily the world is not so scared any longer of the US. Despite the damages done to North Africa and the Middle East, it appears to have lost most of its mojo. Which is sad for its neoliberals who cannot see through a glass darkly and keep hitting at the same targets (missing them more than hitting them). But the servitude has mostly vanished, except of course for Britain where masochism is a virtue and Ukraine which is soon to be gone from the world stage. Europe tries to salvage as much as it can of Ukraine as a perceived… Read more »

Wow that is the worst crap I have ever read coming from this author, several major premises are widely off the mark. She accepts as ? fact the comment made by US pigs that sanctions are hurting the common people of Russia worse than the leaders, while obvious the leaders are still going to be eating dinner, the sanctions have at most been a slight inconvenience to the Russian public and temporary at that. There are and will be jobs galore rebuilding those areas of Russian control in Ukraine, no infrastructure was damaged in Russia, the ruble is stable, the… Read more »