In his old age, Chomsky shows himself not only wrong, but just another Jewish Russophobe, like countless media and political figures in the West.

June 28, 2022 8 minutes read
Please make sure these dispatches reach as many readers as possible. Share with kin, friends and workmates and ask them to do likewise.

The nonagenarian intellectual Noam Chomsky, author of over 100 books, is still going strong. He was recently interviewed by AcTVism. The entire interview is interesting, but the focus here is on the first 20 minutes where the situation in Ukraine is discussed.

Chomsky lays out the US directive to NATO in the proxy war: “The war must continue until Russia is severely harmed.” 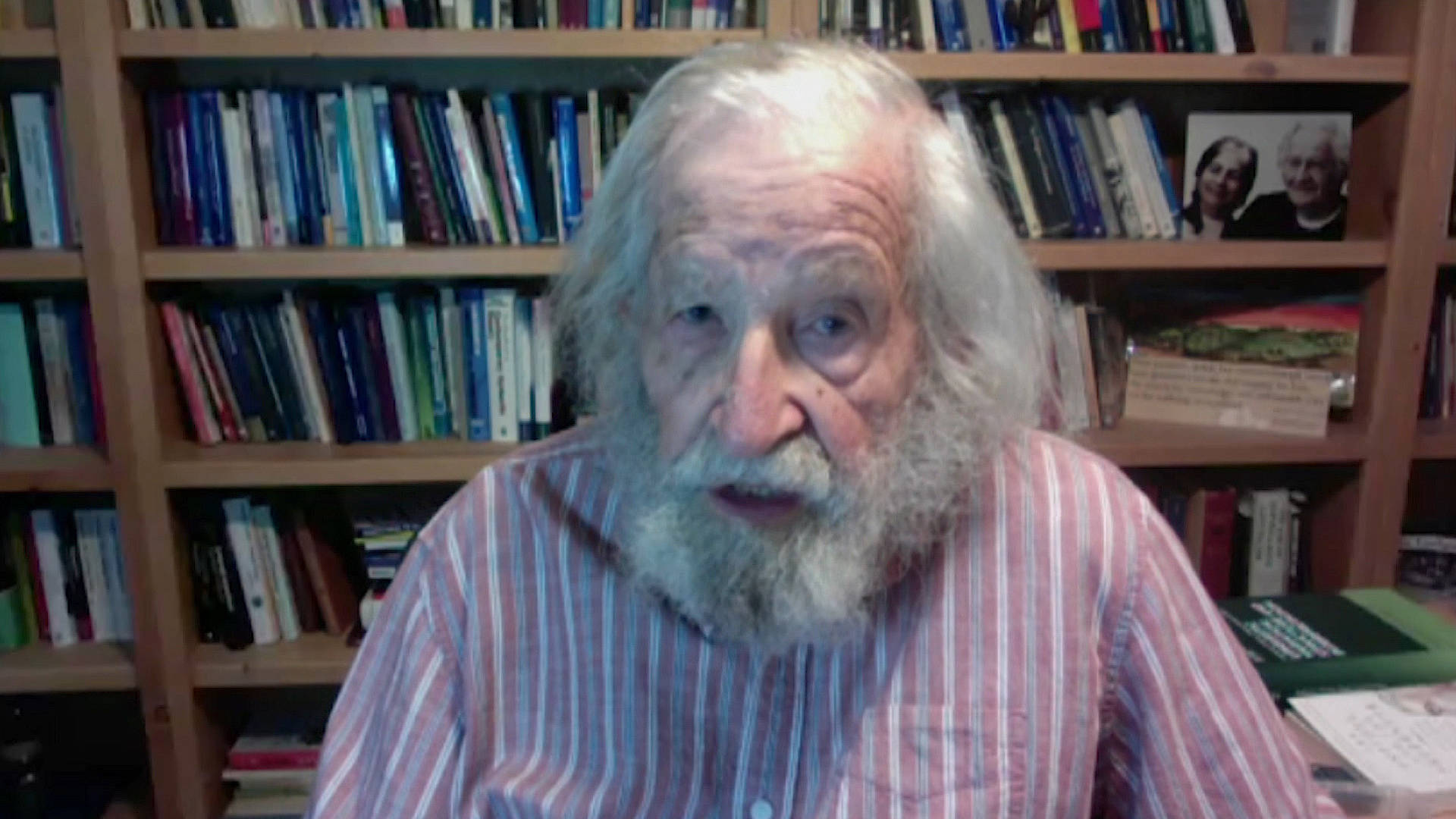 Plainly, he is out of his depth. He does not understand Russia's way of war. Especially in Ukraine.

The professor scoffs at Russian military might. He says that western European countries “are gloating over the fact that the Russia military has demonstrated to be a paper tiger, couldn’t even conquer a couple of cities a couple of kilometers from the border defended mostly by a citizens army, so all the talk about Russian military power was exposed as empty…”

I grant that Chomsky is indeed a polymath, but is he an expert on military operations? Scott Ritter and Brian Berletic (The New Atlas channel), on the other hand, are Americans steeped in militarism. Berletic is a former US marine and Ritter is a former intelligence officer for the US marines. Both of them explain the Russian strategy in shaping the battlefield. The reason for this is to minimize Russian casualties and Ukrainian civilian casualties. This is unlike American Shock and Awe warfare where “collateral damage” (as killing of civilians by US military is trivialized) is accepted to attain US military objectives. Moreover, since Donbass was the industrial heartland of Ukraine, as well as part of the wheat belt, it is in Russia's interest to protect the infrastructure and agriculture, as well as protecting the, largely Russian speaking, people of Donbass. However, the perceived slowness of implementing the Russian strategy — surrounding enemy fighters in siege warfare and compelling their surrender — seems to make Russia a paper tiger in Chomsky’s estimation.

If Russia is a paper tiger, then what does that make Ukraine? Ukraine was trained by NATO, armed by NATO, and fed intelligence by NATO, as well as outnumbering Russian fighters [at least 3 to 1] while fighting on home turf?

Yet Russia has destroyed most of the Ukrainian fighters (including Ukrainian Nazi fighters), obliterated most of their weaponry, including resupplies by NATO, and has liberated Donbass and conquered other parts of Ukraine (a country larger than Texas on the verge of potentially becoming landlocked if it persists in fighting a losing battle).

Chomsky characterizes western countries as “free democratic societies.” [sic] He follows this by stating, “There is no conceivable possibility that Russia will attack anyone [else]. They could barely handle this [fight with Ukraine]. They had to back off without NATO involvement.”

The fighting was personalized by Chomsky as Putin’s “criminal aggression” and that Putin acted “very stupidly” because he “drove Europe into Washington’s pocket”: “the greatest gift he could give the United States.” Chomsky would heap more ad hominem at Putin’s “utter imbecility.”

Chomsky acknowledges that Ukraine cannot defeat the paper tiger, Russia, and supposedly Russian military actions have united the western world against Russia, as if the western world were not already arrayed against Russia. Yes, Germany backed out of the Nord Stream 2 pipeline for delivery of gas to the German market. But who was hurt more by this?

Fossil fuel prices have soared and Russia is the beneficiary. Despite sanctions, the Russian ruble is strong. While the western Europeans have remained loyal to their American masters, Africa, South America, and Asia have ignored the sanctions. China, Pakistan, India, among others, have stepped in to import Russian oil and gas.

While Chomsky points out that the US military-industrial complex and Big Oil are overjoyed by the Russia-Ukraine warring, unmentioned is that average American citizens (and their European counterparts) are not feeling particularly gleeful at spiking gas costs and burgeoning inflation.

Why does Chomsky not mention the 8 years that Ukraine had been aggressing Donbass, criminally, where a reported 14,000 Donbass citizens were killed? Russia refers to a genocide perpetrated by Ukraine in Donbass. Russia justified its “special military operation” (what Chomsky calls a criminal aggression) by recognizing the sovereignty of the Lugansk and Donetsk republics and entering into a defensive pact (what NATO is supposed to be about).

War is anathema, but when diplomacy fails and you are faced with a violent, belligerent hegemon, then sometimes war becomes a necessity. When an animal is backed into a corner, it will come out fighting for its life. The writing was on the wall when the US, a serial violator of international agreements, broke its promise to Soviet President Mikhail Gorbachev that NATO would not move one inch further eastward and then expanded to the Ukrainian border, a red line for Russia. Russia was being backed into a corner. Speaking to the initiator of the war in Ukraine, a question arises: is the animal backed into a corner by a predator an aggressor for realizing that fighting was the only option?

But no lives needed to have been lost. No territory needed to have been lost (aside from Crimea which had held a referendum in which the population overwhelmingly voted to join Russia; it is a United Nations recognized right of a people to self-determination). And to think that all of this could have been averted if Ukraine had upheld the Minsk agreements that they signed granting autonomy to Donbass, nixed seeking NATO membership, and declared themselves neutral. In other words, honor a contract and use money allotted to militarism for other ends (say, for example, education, employment, and social programs). Sounded like a no-brainer from the get-go, and this has been magnified since the special military operation. But it does not seem to be sinking in to the Russophobia-addled brains of Ukrainian president Volodymyr Zelenskyy and his coterie. [Not to mention his puppetmasters in Washington, Brussels, and London].

All this is missing from Chomsky’s analysis. The Nazified Ukrainian government somehow escapes criticism. The US does not escape criticism, but this is mild compared to the name-calling and criticism of Russia. It may not be surprising considering that Chomsky has been criticized for a biased and inaccurate version of Soviet/Russian history.

ABOUT THE AUTHOR
Kim Petersen is a scuba diver, independent writer, and former co-editor of the Dissident Voice newsletter. He can be emailed at: kimohp at gmail.com. Twitter: @kimpetersen.

--
This communication may be unlawfully collected and stored by the NSA in secret.  The information contained in this email is confidential and is only intended for the party to who it is addressed. If disclosure is sought, please ask permission. Thank you.

Basically he is saying that Russia should just take her pants of and lean on the table, to get sodomized by mighty USA and her democratic lapdogs, instead of acting so stupidly as defending herself! Democratic my ass!

Perhaps he thinks, that Russia should accept also that it must be decolonized!

why is any one still asking chomsky questions in his advanced dementia,when even in youth,he was a one trick pony,much like all anarchists,especially his god bakunin