The Sandinavians supposed neutrality is a thing of the past. For several decades now they have been little but Washington's lapdogs

July 7, 2022
Be sure to circulate this article among friends, workmates and kin.

Norway’s Labour Party government stepped in on the first day of a strike by oil and gas workers Tuesday to criminalise their job action. The move demonstrates how governments in every country are illegalising working class opposition to the spiraling cost of living so that the imperialist powers can continue waging war with Russia.

The strike involves 74 mainly senior oil and gas workers on the North Sea platforms of Gudrun, Oseberg Sør and Oseberg Øst and was set to have expanded to include a further 117 workers on the Heidrun, Aasta Hansteen and Kristin fields on Wednesday. Under conditions of inflation of over 5 percent and bumper profits for the oil and gas giants due to high energy prices, workers are demanding wage increases.

Despite the relatively small number of workers involved, their strategic position in Norway’s oil and gas production would have seen total gas output drop by 25 percent and oil by 15 percent by the weekend. This prospect was intolerable for the Norwegian government and the major European imperialist powers in Berlin, Paris and London, which are increasingly reliant on Norwegian natural gas to replace supplies from Russia. The government, therefore, announced just hours after the strike that the job action had been banned and all outstanding issues would be submitted to a compulsory wage board, a government-appointed body that will make a final determination on the pay dispute. 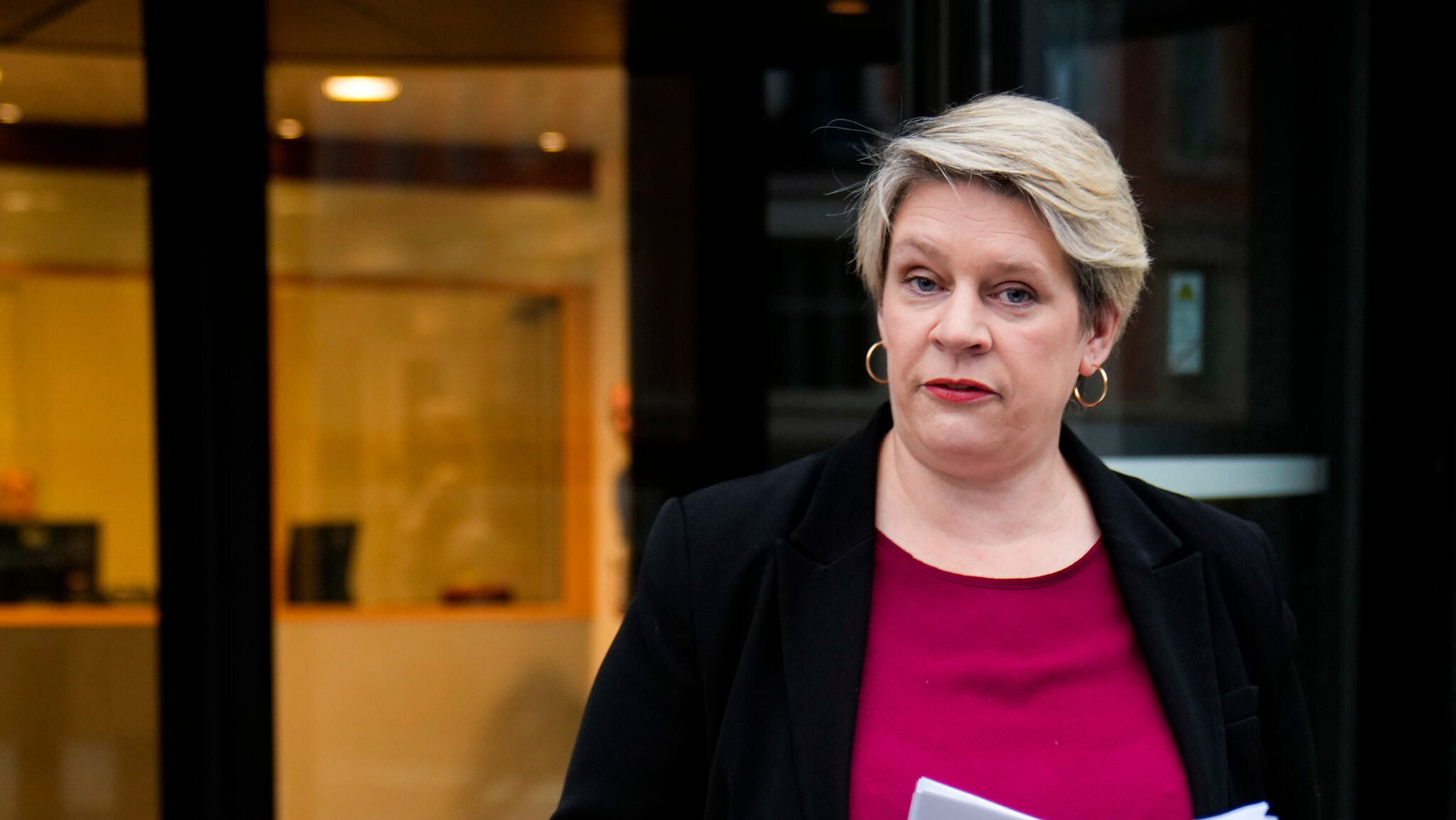 “When the conflict can have such great social consequences for the whole of Europe, I have no choice but to intervene in the conflict,” declared Labour Minister Marte Mjøs Persen in a statement. “It is unjustifiable to let gas production stop to such an extent.”

Underlining the explicitly political character of the decision, the Ministry of Foreign Affairs released its own statement, which demanded that Norway “must do everything in its power to help maintain European energy security and European cohesion against Russia’s war.”

The logical conclusion to be drawn from the government’s action and this chilling statement is that any job action or protest by workers that threatens the imperialist powers’ war will be declared illegal and prohibited by using the full force of the state apparatus. A regime that resorts to “everything in its power” to crush popular opposition and “maintain … cohesion” ought to by rights be called a dictatorship.

The oil workers’ union rushed to give its stamp of approval to the government’s draconian action. Audun Ingvartsen, leader of the Lederne union, vowed that workers would return to their jobs as soon as possible. Asked if the strike was over, he told Reuters, “Yes.”

Norway’s trade unions are among the most important backers of the Labour Party. They preside over a heavily regulated and centralised collective bargaining system designed to suppress workers’ struggles. Norway’s trade union confederation LO (Landesorganisasjonen), counts approximately 1 million members out of a total population of just over 5 million and a working population of around 3.5 million people.

Far from being exceptional, Tuesday’s events in Norway are increasingly the norm across Europe and North America, as deeply unpopular governments sitting atop unprecedented levels of social inequality, trample basic democratic and social rights under foot at home and wage war abroad. Late last month, the Biden administration intervened to ensure that a threatened strike by over 20,000 dockers at the port of Los Angeles was called off before it had even begun. The workers were determined to fight for wage increases and an end to a brutal regime of casual labour that has left many workers sleeping rough in their cars in a desperate effort to secure a shift. But for the American ruling class, any disruption to the key trade route is unthinkable because it would disrupt its war aimed at reducing Russia to the status of a semi-colony.

Spain’s Social Democratic-led government intervened last week to criminalise a strike by Ryanair pilots and cabin crew for improvements to wages and conditions.

In Germany, the Social Democrat-led government met Monday for the first session of a corporatist dialogue with trade union and business leaders to determine how to suppress workers’ wage demands to fund the war effort. The “Concerted Action” called by Chancellor Olaf Scholz aims to impose the full burden of Germany’s massive €100 billion rearmament programme on the backs of working people.

Norway is a major gas supplier to Britain and Europe, and its role has increased still further following the US-NATO-instigated Russian invasion of Ukraine. In 2021, Norway accounted for a quarter of gas supplies to Britain and Europe. In March, Equinor, the state-owned oil and gas firm, confirmed that it received permits from the Norwegian government to increase gas production at the Oseberg and Heidrun fields by 1 billion cubic metres and 0.4 billion cubic meters respectively by September 2021. It was no mere coincidence that this announcement came as German Deputy Chancellor Robert Habeck visited Oslo to sign an agreement with the Norwegian government for increased gas supplies to Germany, which already depends on Norway for 30 percent of its natural gas needs.

German news magazine Der Spiegel reported at the time that the German government would supply Norway with specially equipped ships capable of converting liquified natural gas into gas off the German coast in order to facilitate Norway’s export of an additional 1.4 billion cubic meters of natural gas to Europe this summer. Habeck also announced during his visit the creation of a bilateral working group to consider the building of a gas pipeline between Germany and Norway.

In addition to supplying energy for the imperialist powers war effort, the Norwegian government is more than a willing partner in the massive military build-up against Russia. Sharing a short Arctic border with Russia, Norway has played host on several occasions over recent years to major NATO exercises. NATO Secretary General Jens Stoltenberg, who has overseen a vast expansion of the aggressive military alliance’s presence in Eastern Europe and has initiated the creation of a 300,000-strong rapid reaction force, served twice as Norway’s prime minister between the late 1990s and 2013. During Stoltenberg’s second term in office, Norway’s current Prime Minister and Labour Party leader, Jonas Gar Støre, served as his foreign minister.

The banning of the Norwegian oil workers’ strike by a government claiming to be “left-wing” underscores how workers in Norway and internationally entering into struggle against the intolerable increase in the cost of living and dangerous working conditions, including the threat from the pandemic, confront a political fight against imperialist war. Behind the backs of the population, the major powers have decided that everything, including workers’ democratic and social rights, must be sacrificed to a war aimed at carving up Russia and seizing control of its rich natural resources.

But they will not succeed with this mad plan. The oil workers’ strike also revealed, if only briefly, the immense social power of the working class. If less than 200 Norwegian oil and gas workers can reduce energy exports to Europe by a quarter in a few days, a mass mobilisation of the international  working class on the basis of a socialist programme could rapidly bring the imperialists’ war machine to a grinding halt. It is for the development of such a global anti-war movement led by the working class that the World Socialist Web Site fights.

ABOUT THE AUTHOR
The author works for WSWS.org, a socialist (Trotskyist) website.

‘Norway’s trade unions are among the most important backers of the Labour Party. They preside over a heavily regulated and centralised collective bargaining system designed to suppress workers’ struggles.’

Very true, alas.  The article does, however, give the misleading impression that Norway’s present government is a Labour one when it is a variation on the Red-Green Coalition which ruled 2005-2013 with Labour Party leader Jens Stoltenburg as Prime Minister. He has since become NATO’s General Secretary – Norway was a founding member of NATO back in 1949.  The party’s current leader is the capitalist Jonas Gahr Støre. Once upon a time, Labour was considered ‘radical’: in 1919 it joined the Third International which had its headquarters in Moscow. Similarly, the Green Party was once concerned with alternative economics (who remembers BD Brochmann?), alternatives to military service, alternative energy, partial opposition to whaling (whale meat is still for sale) as well as going some distance towards the decriminalisation of certain drugs. The Socialist Left, formed in 1975, has its origins in a group which left the Labour Party over NATO membership. Interestingly, they were predictably against the US invasion of Afghanistan and Iraq but the Party leadership favoured NATO air strikes against Serbia over that country’s role in Kosovo (killing thousands and causing as many as 1.5 million people to flee as refugees). The ‘Marxist inspired’ Reds are, as history shows, anything but. The Red Electoral Alliance was formed in 1973 as an electoral front organisation for the Workers’ Communist Party. Much can be said about the WCP, but the Norwegian newspaper Aftenposten’s headline from 28 August 2005 probably cannot be bettered: ‘They worshipped Stalin, Mao and Pol Pot’. And one Vidkun Quisling was a Minister in government for the populist Centre Party’s earlier incarnation as the Farmer’s Party. He later led Nazi-occupied Norway. Eugene Debs’ WW1 remark remains apposite: ‘Yes, a change is certainly needed, not merely a change of party but a change of system, a change from slavery to freedom and from despotism to democracy, wide as the world’.