Ron Paul Told The Truth About The FBI 40 YEARS AGO! 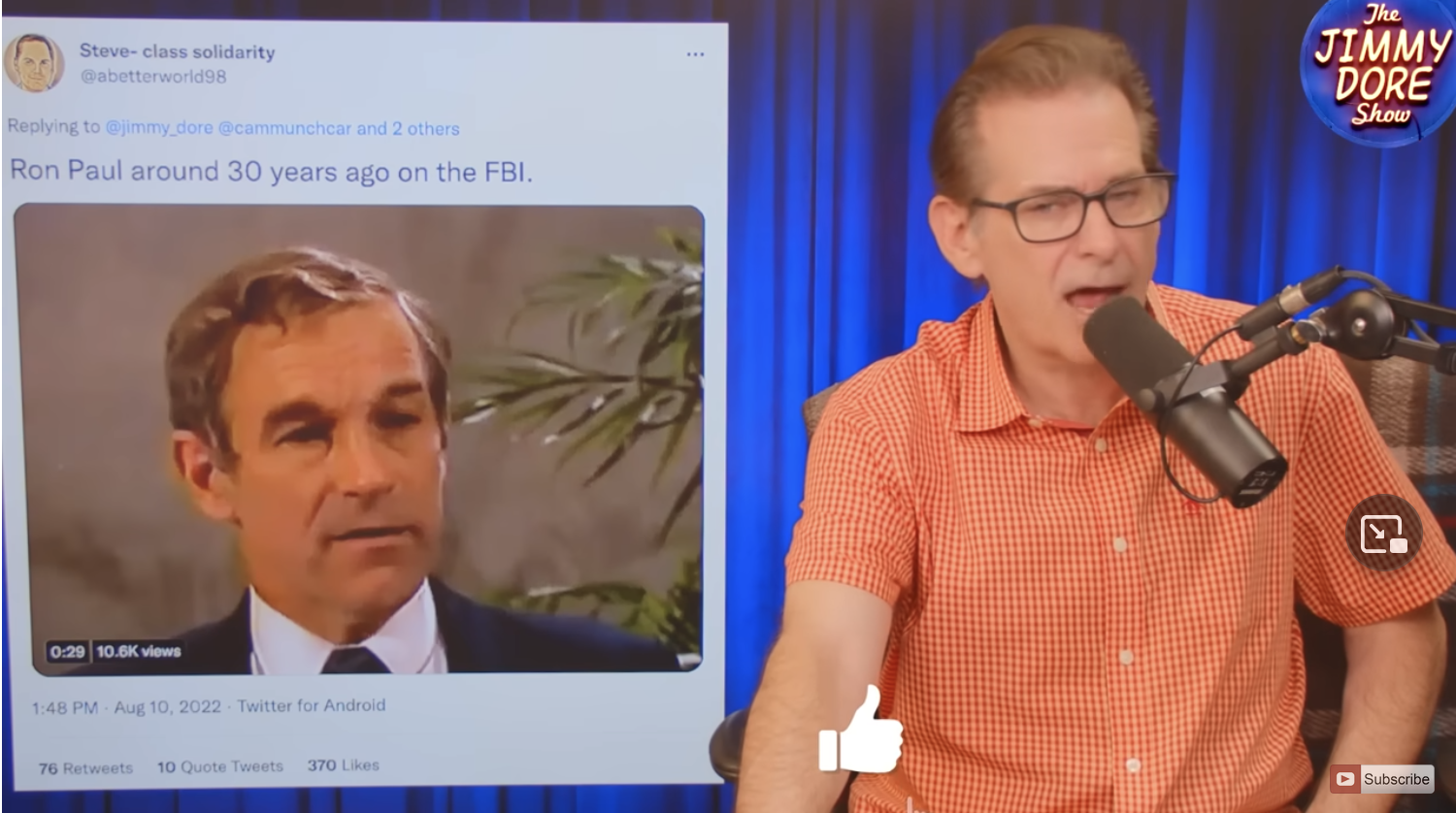 The Jimmy Dore Show / Aug 14, 2022
Former Congressman and longtime libertarian stalwart Ron Paul was sounding the alarm about the FBI more than 40 years ago, acknowledging that the bureau has always sought to monitor activists and quell dissent, despite some legitimate investigative work. In a decades-old video Paul explains his support for replacing the FBI with a series of state-based justice departments. Jimmy and America’s comedian Kurt Metzger discuss the recently surfaced video of this interview with Paul.

EDITOR'S COMMENT
Contemporary populists like Jimmy Dore and his associates are catching up with the FBI and other institutions created more than a century ago with the sole purpose of controlling and if necessary destroying legitimate dissent.

The FBI was founded during the reign of the saintly, and supposed evangelist for antiwar activism and "democracy" Woodrow Wilson (who, after a policy of neutrality at the outbreak of World War I, led America into war in order to “make the world safe for democracy"). In reality, Wilson was nothing but another hypocrite and outright racist to boot. His sympathies for the Confederate cause, or his rabid anti-communism, were never in doubt. Many people are now familiar with Wilson's enthusiastic approval of D.W. Griffith's Birth of a Nation, not surprising, given his upbringing: Wilson grew up in the American South, mainly in Augusta, Georgia, during the Civil War and Reconstruction. In 1915, President Woodrow Wilson watched The Birth of a Nation, a film by D. W. Griffith that falsified the reality of the post–Civil War Reconstruction period by presenting blacks as attempting to dominate southern whites and sexually force themselves on white women. The Ku Klux Klan (KKK), in violently oppressing blacks, was ultimately portrayed by the production as the savior of the South’s white female nobility. After that private screening of the film at the White House, Wilson reportedly stated, “It is like writing history with lightning, and my only regret is that it is all so terribly true.”

Wilson’s statement was inaccurate, at best. The events and images that the silent film presented were untrue stereotypes; the events, politics, and culture of the Reconstruction era were the opposite of what occurs in the film’s plot. In reality, whites dominated blacks and assaulted white women during Reconstruction, and, rather than a vigilante justice group, the KKK was little more than a white terrorist organization. (Cynthia Gwynne Yaudes)

To shape public opinion, Wilson (by then a clear imperialist Democrat despite his rhetoric) in 1917 established the first modern propaganda office, the Committee on Public Information (CPI), headed by George Creel.[217]

In November 1919, Wilson's Attorney General, A. Mitchell Palmer, began to target anarchists, Industrial Workers of the World members, and other antiwar groups in what became known as the Palmer Raids. Thousands were arrested for incitement to violence, espionage, or sedition. Wilson by that point was incapacitated and was not told what was happening. On August 1, 1919, Palmer named 24-year-old J. Edgar Hoover to head a new division of the Justice Department's Bureau of Investigation, the General Intelligence Division (GID), with responsibility for investigating the programs of radical groups and identifying their members. (Wikipedia). 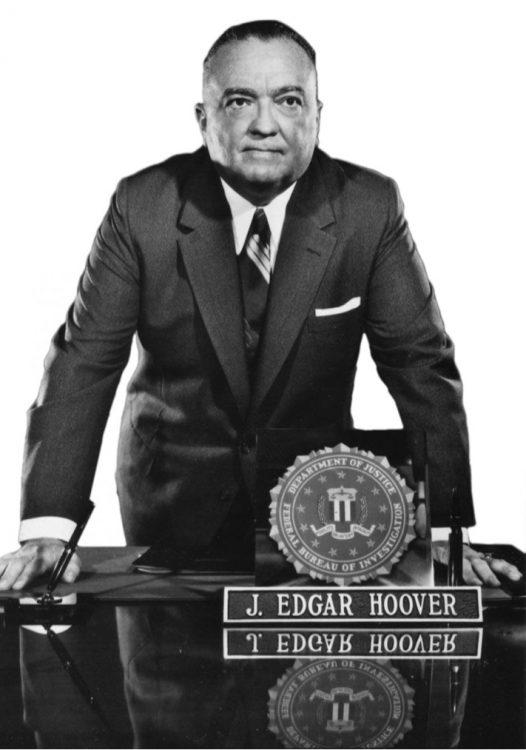 Hoover: a hard to match hypocrite for the ages. In a prudish society, his stock in trade was often the sexual peccadilloes of prominent figures.

The FBI was thus born primarily as a national security agency, charged with the domestic front. Over the ensuing decades, the agency accumulated a voluminous record of underhanded and controversial interventions, many clearly unconstitutional. It was precisely to deflect public attention from this unpopular political police role that the establishment began to provide the masses with a different image of the FBI, one concerned with leading "public enemies", notorious gangsters and racqueteers. The "crime busters" image was reinforced by carefully managed p.r. campaigns and compliant media programs, such as the eponymous TV series The FBI, which made the agency a welcome fixture of Americana in most US households. The abuses, however, finally detonated a Senate probe. In 1976, the US Senate Church Committee (led by Idaho Sen. Frank Church) launched a major investigation of the FBI and COINTELPRO. Many released documents have been partly or entirely redacted. The COINTELPRO (syllabic abbreviation derived from Counter Intelligence Program) (1956–1971) was a series of covert and illegal[1][2] projects actively conducted by the United States Federal Bureau of Investigation (FBI) aimed at surveilling, infiltrating, discrediting, and disrupting domestic American political organizations. The Final Report of the Select Committee castigated the conduct of the intelligence community in its domestic operations (including COINTELPRO) in no uncertain terms. (Wikipedia).

But the FBI, of course, cannot change its spots any more than the US plutocracy its dubious aims, and we can assume with a high degree of certainty that the agency's questionable activities continue to this day, especially now that the FBI, along with the CIA, etc., is warmly embraced by the Democrats and millions of idiotised liberals, what unfortunately passes for the left in the US.