Western ruling elites have Dariia Dugina’s blood on their hands

August 24, 2022 9 minutes read
Please make sure these dispatches reach as many readers as possible. Share with kin, friends and workmates and ask them to do likewise. 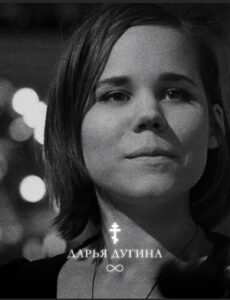 The murder of Dariia Dugina triggered the now quite predictable reaction from the collective West: total indifference.  This is hardly something new.  The West not only put a Nazi regime in power in Kiev, it supported it by all means possible while that regime did all of the following:

And I could go on and on.  But I think the image is rather clear.  It shows that:

I submit that two things are really essential here: the pattern described above has been unchanging since at least the Crusades and this pattern is unanimously shared by all western governments today.  This is no fluke, no mistake, but the core of a worldview shared by all the western ruling elites, especially northern Europeans (the reality of southern Europe and the Mediterranean cultural realm to which southern Europe used to belong is more nuanced and complex).

Dariia Dugina was murdered by a single Ukronazi terrorist, directed by the SBU which, in turn, is just a proxy for the CIA/MI6.  But Dariia Dugina’s innocent blood, like the blood of MILLIONS of other innocent people throughout history is in the hands of the ruling class which pretends to see nothing while being directly involved in it all.  As for the people of the West, they have to decide whether they will continue meekly accept to be ruled by murderous, racist, thugs or whether they will resit them (or, at least, not support them and, at the very least, have the decency to decide to never knowingly support any lie)

So far, I have to sadly admit that I am not very impressed.  I see a post-truth society in which the very concept of truth has lost any meaning.  That utter and total indifference to the very notion of truth is the only true “western value” left.

ABOUT THE AUTHOR
Andrei Raevsky (The Saker) is the chief editor and founder of the Vineyard of the Saker network of geopolitical sites.

The reaction to this terrorist act, both in the West and among Russian “liberals” really highlighted the full extent of hypocrisy and the utter worthlessness of the so-called “western values”. They are essentially admitting that yes, it’s perfectly okay to murder someone for expressing differing opinions. Because after all, we must defend democracy and freedom of expression.

If you look at the “reporting” on this in western media, the syndicated headline merely says “daughter of Putin ally killed”. As if to say, see it’s ok because Putin is bad and against democracy. No mention of the word “terrorism”. No mention of the fact that this girl was merely a journalist and had no connection to any military unit whatsoever. And yes, it is sad that somehow this all adds up for the masses that consume this rhetoric.

Don’t be surprised if the murder is blamed by the west on … The Russians. And why not? If an already majority stupefied western population can be made to believe the Russian forces deliberately struck the nuclear power plant they’re in control of using US missiles, it won’t be too difficult. I look forward to the Azov trials said to begin in the late summer which will have international observers present and that should bring some unpalatable truths to the forefront!

The Western brainwashing machine is astonishing in scope, not only do they own the major news corporations, and make use of entertainment (sports, music, movies, etc…) events to spread their narrative, but, also create things like “fact-checkers” (euvsdesinfo.com, stopfake.com, etc…) to give an appearance of professional neutrality, and push the propaganda on the people who started having doubts about the narrative or find contradictions/arguments to it.
By promoting the people who believe blindly and sycophants of western imperialist “values”, supporting the fascist/corporativist order and bribing/buying international media, [they] created a feedback loop/self-supporting web, while giving a fake appearence of diversity/freedom of opinion. The fall of the USSR removed the last obstacle to their dominance, it was treason not only to the soviet citizens (see how Ukraine ended up) but to the world as a whole, it let everyone down.
The only way to change this, is by destroying its instruments of power (EU, NATO, IMF, WEF, etc…) and deweaponize institutions like the UN, and the only way to do that is by creating alternatives to them/their functions, stripping the dollar from its status, and, collapsing western economies in an economic depression. Then, that will either make their population lose trust and provoke revolutions, or, openly bring dictatorship to the west at the cost of freeing most of the world.

Can't destroy the West. “Westernism” at root is an ideology. Cannot extricate ideologies from the faithful anymore than you can get Joan of Arc to recant.

Ideologies persist until humans are honest that at root they know nothing about meaning or miracles, and that they are deathly afraid of the infinite abyss.

Quite a list of sins. A million Iraqis and Afghans, a million Indonesians, a million Vietnamese–and these are just the biggies. Not even bothering with the murder in Latin America and Africa and the impact of sanctions. Standard operating procedure. Is anyone shocked? This is a country whose deep state blew the head off the president in broad daylight. There is no limit. Women and children? Not even a moment’s hesitation. The US and Ukraine were made for each other–it’s the perfect proxy. Russia is not special. Russia is just the soup de jour.