One prominent way that the U.S. regime and its allies (or vassal-nations) deceive the public is by false headlines that often don’t even represent the news-report fairly or at all. A good recent example of this was a 23 August 2022 Reuters report headlined “Analysis: As Ukraine war drags on, Europe's economy succumbs to crisis”. The lie that the headline was designed to implant into readers’ minds was that the invasion of Ukraine by Russia didn’t merely contribute to “Europe's economy succumbs to crisis,” but that when winter comes and Europeans will be experiencing an even worse economy, that will be largely if not mainly because the “Ukraine war drags on.” 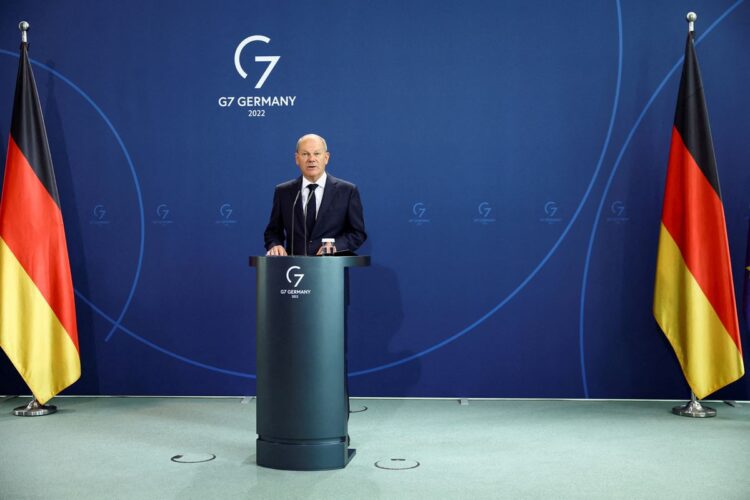 Germany according to Reuters: German Chancellor Olaf Scholz gives a press statement about the gas levy at the Chancellery in Berlin, Germany August 18, 2022. The actual causes for the dramatic rise in prices are never explained. (REUTERS/Lisi Niesner/File Photo)

Actually, Europe’s own sanctions against Russia have produced and are producing skyrocketing commodities-prices that Europeans are experiencing not just in fuels but in foods, and will increasingly experience during the winter when there will be an even bigger demand for the fuels that Russia more than any other supplier and had been selling to Europeans at lower prices than any other country — but, now, because of those sanctions that are imposed by Europe’s leaders, Russia’s fuels are banned from European markets. Europe’s leaders have imposed those sanctions, and Europe’s ’news’-media praised them; and, so, European citizens approved of those sanctions; but, now, Europeans are starting to feel the inevitable consequence of that policy: soaring commodities-prices, and declining economies.

On 9 May 2022, Russia’s RT News bannered “Europe’s biggest economy faces wave of bankruptcies — banking chief: Aggressive sanctions against Russia are sending financial shockwaves through Germany”. That was an honest headline and following news-report, which one won’t see in U.S.-and-allied ’news’-media. The opening was:

Germany will be battered with a wave of bankruptcies due to Ukraine-related sanctions against Russia, according to Commerzbank Chief Executive Officer Manfred Knof.
“The energy supply in Germany is at risk, supply chains are breaking down, we have high inflation,” Knof was quoted by the Handelsblatt daily as saying.
According to the executive, almost a third of Germany’s foreign trade has been impacted, forcing companies to navigate complex issues with customers, including surging commodity prices and supply-chain bottlenecks.
“We shouldn’t delude ourselves: the number of insolvencies in our markets will probably increase and the risk provisions of the banks with it,” Knof said.

Whereas the Reuters ’news’-report had a false headline, and their following news report was incomprehensible about what is causing Europe’s economies to suffer — and the headline’s implication was that Vladimir Putin was to blame, and that Putin caused it when he made the decision on February 24th that (supposedly) caused Europe’s economic plunge — this news-report from Russia (unlike the Reuters one) had no need to lie. That’s the difference between propaganda versus news. Propaganda is fake ‘news’. Fake ‘news’ comes from the approved ‘news’ media.
Many people don’t even read beyond the headline. Far more people read the headline than actually read the news-report that is below it. And even people who don’t read beyond the headline get their mind imprinted by the impression that the headline suggests. So, headline deception is a major technique of propaganda.
Anyone in The West who pays subscription fees to receive ‘news’ from their Government-approved ‘news’-media is paying in order to be deceived by their Government. It might give people a ‘good feeling’ because it’s thought to be from ‘our Government’ even if in fact it is only from the ‘news’-media that are owned and controlled by the billionaires who fund the political campaigns of the winning political candidates, but those subscription-fees are actually buying poison — mind-poison.
Obviously, any news medium that is publishing this article would never knowingly do such a thing. But all of the mainstream U.S.-and-allied news media do it all the time, and they know what they are doing, and why.