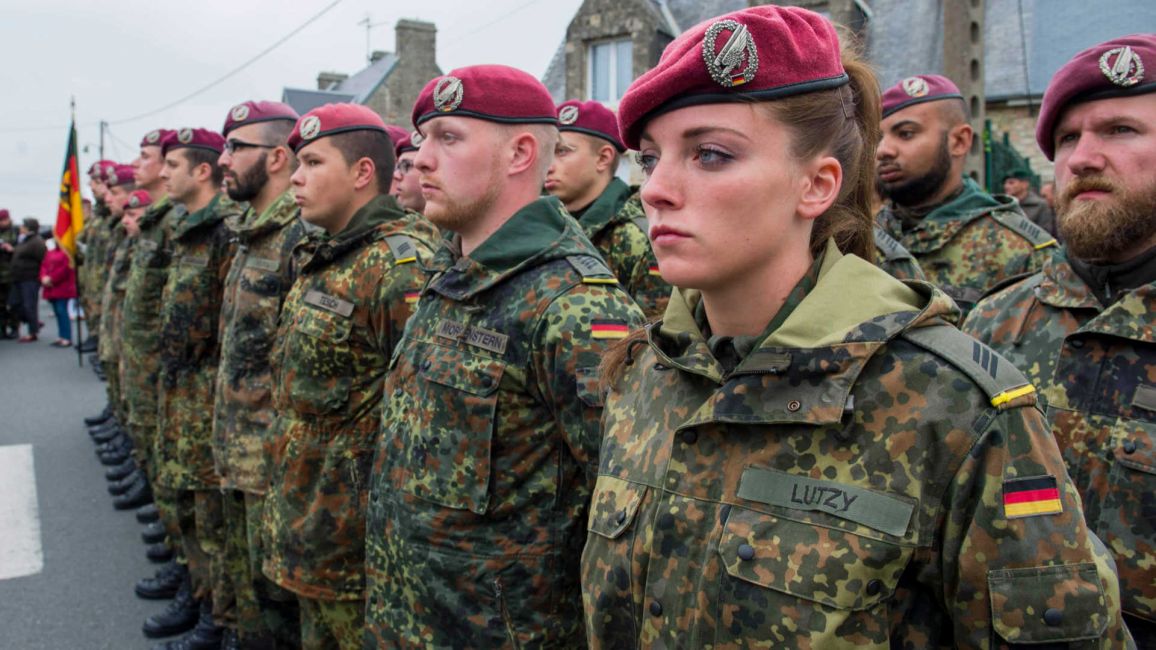 The new German military: mainly for show in a nation that lacks true sovereignty.

Germany’s news media — echoing America’s — have attributed the soaring fuel-prices to Russia’s invasion of Ukraine, which clearly is a lie, because the source is clearly Germany’s anti-Russian sanctions and termination of the Nord Stream 2 natural-gas pipeline and other supplies into Germany of the least-expensive fuels-sources, which had been Russian, which is why Russia was the biggest supplier of fuels to Germany. Because those fuels were so much cheaper than the ones that the U.S. occupying forces demand Germany to use instead (such as liquefied natural gas from America), and because Germany’s leaders are more committed to Germany’s American masters than to the German people whom they are supposed to represent, they ought to be thrown out and replaced now by an entirely new German Government that will serve the German people instead of serving the U.S. occupying regime, which demands and enforces these sanctions. The purpose of the sanctions is to greatly reduce European fuel purchases from the cheapest source, Russia. That forces up fuel costs in Europe, but Europe’s leaders comply anyway, which proves how obedient they are as stooges of the imperial regime across the Atlantic, in Washington.

America is run by — and its Government is effectively owned by — its billionaires, who buy politicians like hogs are bought at a pig-auction: the highest bidder wins. (It’s shown graphically here.) But at this auction, all of the highest bidders are billionaires, and the profit and nonprofit corporations that they control. Here is how the former U.S. President Jimmy Carter put it when asked about corruption in America:

What’s happening now to Germany is profitable to those people, but is threatening to destroy the whole world if Washington pushes it too far, and produces WW III.
The long road to our present predicament started when U.S. President Harry S. Truman decisively repudiated and reversed his predecessor FDR on 25 July 1945 and determined that the U.S. Government henceforth would be set onto the path of taking control of the entire world ultimately, to become the first-ever all-encompassing global empire (now called “hegemon”). By the time of 1947, he had created the CIA and the falsely named “U.S. Department of ‘Defense’” (actually the department of aggression, like the CIA was the department of coups), and replaced FDR’s entire cabinet, in order to do this. They then produced NATO in 1949. (The Soviet Union responded six years later, by forming their Warsaw Pact in 1955.) Virtually all U.S. Presidents afterward have been committed to this “hegemonic,” actually maniacal, zero-sum-game-committed, goal of America dominating everywhere, so that any competitor is automatically viewed as being an enemy. Their obsession is to achieve “hegemony” — global control — which none of them announces publicly as constituting the Government’s top goal, but they all call it instead their support of spreading ‘freedom’ and ‘human rights’ and ‘democracy’, as-if the country which has a larger percentage of its population in prison than does any other nation on Earth could even POSSIBLY be a democracy, or promote human rights. Germany, like all other U.S. vassal nations, is merely a tool of that plan for world-conquest by the U.S. regime. Like all of the others, it’s dutiful to its foreign masters, and not to its own population (who now increasingly will be feeling the consequences).
In order for the German people to become authentically free, they need to replace their existing westward, Atlanticist, pro-U.S.-regime, orientation, by a far more economically viable eastward, Russian, Chinese, and authentically EurAsian one, which will mean that Germany will no longer participate in imperialism by ANY nation, but will instead quit NATO and have commerce with all nations that is NOT being restricted by anything like the imperialism America’s billionaires have been imposing upon Germans ever since 1945 and especially since 1991. If German politicians are being bought by the highest bidders like America’s are, then they will all have to be replaced in order for the German people to become freed from the American regime’s imperial yoke. EurAsia is one continent, after all, and no way will exist to pipeline gas or oil across the Atlantic Ocean, from America. And the very idea of replacing pipelined energy by far costlier LNG and other shipped energy is an insult to all residents of Europe.
On Sunday 3 July 2022, Bloomberg News reported that Germany’s “Economics Minister Robert Habeck said on Saturday that the government is working on ways to address the surging costs both utilities and their customers face, without giving details.” At least as early as that date, Germany’s Government knew what they were doing to the German people, but they did it anyway. And they continued to lie about it to the German people. The entire Government needs to be replaced; but, more than that, NATO must be abandoned. Any German politician who supports it supports continued U.S. occupation, and supports continuation of the U.S. regime’s non-stop war, ever since 1945, against both Russia and China. Isolating its economy from Russia and China makes sense? To whom? Germany will do far better as a partner of Russia and of China, than as a vassal of the U.S. regime. Russia and China would welcome the new German leaders as partners — not demand them to serve as mere stooges in a mere vassal-nation (as the U.S. regime does). And any such allegation as Bloomberg ‘News’ headlined on 25 June 2022, “Putin Is Pushing Germany’s Economy to the Breaking Point” is merely pretending that the February 24th invasion of Ukraine, instead of the sanctions that America and its vassal-nations imposed in response to it, is to blame here. In fact: The U.S. and its NATO had left Russia no other option than to invade Ukraine.

American investigative historian Eric Zuesse’s new book, AMERICA’S EMPIRE OF EVIL: Hitler’s Posthumous Victory, and Why the Social Sciences Need to Change, is about how America took over the world after World War II in order to enslave it to U.S.-and-allied billionaires. Their cartels extract the world’s wealth by control of not only their ‘news’ media but the social ‘sciences’ — duping the public.