The reasons for Russia's intervention in Ukraine are perfectly clear and rational to any fair-minded observer. And they have nothing to do with Moscow's "imperialism" or Putin's capriciousness.

Published: September 7, 2022Last Updated on September 11, 2022
Please make sure these dispatches reach as many readers as possible. Share with kin, friends and workmates and ask them to do likewise. 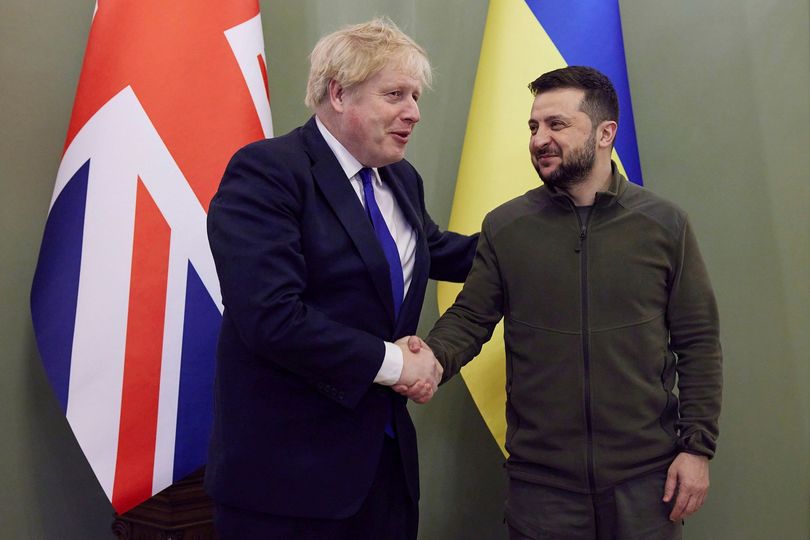 When peace threatened to break out in the early phase of the conflict, British PM Boris Johnson was sent by Washington to tell Zelensky that the Anglo-Americans, and NATO, wished to prolong the Ukraine war indefinitely.

The Western press alleges that Russia invaded Ukraine because of Putin, and that his motive was Russian imperialism, a desire to expand Russia’s territory. In fact, Finland and Sweden responded immediately to Russia’s invasion of Ukraine by seeking membership in NATO, out of fear that “we might be next” to be invaded. However, expansion of Russia was not involved in Putin’s motivation regarding Ukraine, but the fact that Ukraine has the border that is the nearest of any bordering nation to Moscow, being only 353 miles away from Moscow, which would be around five minutes of missile-flying distance away from possibly nuking Russia’s command-center, was very much on his mind.

Even the neoconservative magazine National Interest acknowledged that Putin’s 10 February 2007 speech had basically laid out that any further expansion of NATO would cross a red line regarding Russia’s national security, and that Russia would not tolerate it. When he said there “Regarding our perception of NATO’s eastern expansion, I already mentioned the guarantees that were made and that are not being observed today,” he was referring to America’s having lied to Gorbachev that NATO would not be expanded to the east. Biden’s determination to get Ukraine covered by NATO’s Article 5 so that the U.S. would be able to post its missiles only 5-minutes flying-distance to obliterate Moscow triggered the 24 February invasion, which was an essential national-defense move for Russia (just like JFK’s response to Khrushchev’s placing Soviet missiles in Cuba in 1962 had been). The ethnic matters that Western propaganda focuses on had nothing to do with it. (However, Ukraine’s having definitively condemned and repudiated the 2015 Minsk IIAccord which both it and the Donbass separatist republics had signed and formally committed to, and which the separatists violated only when Ukraine did, was also a factor, because it meant that Ukraine was now clearly committed to invading and retaking that land. But that was only a subordinate factor. Russia’s national security was, by far, the main factor.) In Putin’s repeated warnings to Biden and to NATO, it was always the NATO-expansion matter, and especially Ukraine’s having the border which is the nearest to Moscow, that he stated as being a red line.

On 7 January 2022, Biden, essentially, crossed it. For Russia not to act, in response to that, would have meant that Putin had been bluffing ever since at least 2007. He doesn’t bluff. But he also doesn’t give advance-notice as to exactly how and when he will fulfill on his threat. I think he did it at the wrong time; he should have waited for Ukraine to invade Donbass first (as would soon have happened, but Russia invaded before it did), before he would invade Ukraine. But that error on his part (if it was an error, because his being the second instead of the first to invade would have placed the PR onus on Ukraine, instead of on Russia) had nothing to do with his being a war-criminal, such as Western media portrayed him for this invasion. It was just a matter of wrong timing for something that he was obligated to do (and, under the circumstances, that JFK would have done if he had been in Putin’s shoes). Biden drove him to do it, in any case. The aggressor was America’s President, not Russia’s. After January 7th, Russia had no other option but to use military force against Ukraine, so as to prevent it from ever joining America’s anti-Russian military alliance.

When the invasion started on 24 February 2022, CNN headlined “What does Putin want?” and opened that part of their “The conflict explained”article:

In a lengthy essay penned in July 2021, Putin referred to Russians and Ukrainians as “one people,” and suggested the West had corrupted Ukraine and yanked it out of Russia’s orbit through a “forced change of identity.” That type of historical revisionism was on full display in Putin’s emotional and grievance-packed address to the nation on Monday announcing his decision to recognize the Donetsk and Luhansk People’s Republics, while casting doubt on Ukraine’s own sovereignty.

No mention was made there of how close Ukraine physically is to Moscow — that this was actually the 1962 Cuban Missile Crisis on steroids.
There was nothing of such ethnic concerns in the actual demands that Putin had made to NATO on 17 December 2021, and which demands NATO formally had rejected on 7 January 2022, and which rejection by NATO had sparked Putin’s decision to invade Ukraine.
The key demand on 17 December 2021 was:  “Article 6: All member States of the North Atlantic Treaty Organization commit themselves to refrain from any further enlargement of NATO, including the accession of Ukraine as well as other States.”
When The West mockingly rejected even considering to meet that demand (or any of the others, each of which was likewise entirely reasonable), which was of such vital national-security importance to the Russian people, whom Putin, as Russia’s President, represents, then Putin, and Russia, had no real alternative remaining, but to respond with military force, as they did. Biden/NATO were determined to get U.S. missiles ultimately within only 5-minutes striking-distance of the Kremlin; so, now, the only way left to prevent it would be to invade Ukraine itself. The actual aggression was on the part of the United States, and of its anti-Russian NATO military alliance. (Russia has no anti-American military alliance.) The history behind the matter is clear and indisputable, on all of that. The imperialistic power here is the hegemonically obsessed U.S. regime, not Russia (nor China, nor Iran, nor Venezuela, nor Syria, nor any of the other lands it’s determined to regime-change so as to add yet further it to its empire). It is relentless.
The Western press has numerous times been caught in lies (such as “WMD in Iraq”), and never held accountable for it, but historians are supposed to do better. Even though historians sadly often don’t, we should, and I do. I take truth seriously. The links here are to articles that link to the primary sources; so, any reader here can easily access the evidence on one’s own. It’s all there. Lies in ‘the news’ are commonplace, but they shouldn’t be spread also by historians.
ABOUT THE AUTHOR

What All Western ‘News’-Reporting About Why Russia Invaded Ukraine HIDE