An old cartoon from a Florida newspaper mocking the “testimony” of exiles from Cuba who have fled to the United States shows two stray dogs. One dog tells the other dog “I was a Great Dane back in Cuba! I’d still be one if weren’t for Fidel!”

Comedian George Lopez alluded to this same reality on his sitcom TV program in an episode that aired Sept. 26th, 2003. A Cuban-American character criticizes her daughter for protesting the Iraq war saying “Your Uncles in Cuba are in jail for speaking out against Castro.” Lopez replies with humorous snark “That’s not why they are in jail,” eliciting a laughter from the studio audience.

The Lies of Anti-Communist Exiles

People who live in the United States know that the country is full of people who fled from Cuba, Vietnam, Eastern Bloc countries, Iran, Russia, China, and other countries facing economic warfare from the US government and demonization by US media. The US government routinely rewards people in these countries with visas for their cooperation in intelligence operations. 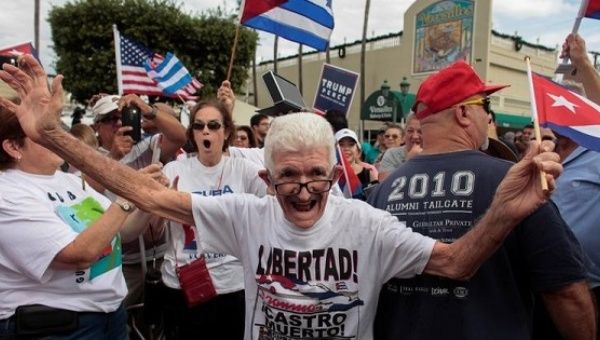 The fanatical "gusano" touch. In a grotesque display of insensitivity, many Cubans in Miami celebrated the death of revolutionary leader Fidel Castro, carrying "Trump / Pence" signs, hoping to “Make Cuba Great Again” by destroying the Cuban Revolution and bringing back the racism, neocolonialism and fascism of the Batista dictatorship. (Telesur)

It is well known that individuals who flee from anti-imperialist and socialist countries have every incentive to exaggerate, embellish and flat-out lie about what they experienced. The more over the top and grotesque their stories are describing the supposed “oppressive regime” they fled from, the more attention and acceptance they will get from their new neighbors and friends in the USA. At the same time, if a Cuban, Chinese or Iranian immigrant starts saying positive things about the government of their country of origin, immediately they will be treated with suspicion, possibly even reported to the FBI as a potential spy. Chinese students studying in the United States are very nervous to say anything positive about the Communist Party for fear they could be labeled as spies and sent home, or even arrested. Long after the Cold War, the forms applying for US citizenship still ask applicants if they are Communists, and immigrants who have been fully naturalized have had their citizenship revoked on the grounds that they were not honest about this aspect of their political beliefs.

In such circumstances, Americans endure a huge amount of dishonest and in some cases, laughable “testimony” from political exiles describing their countries of origin. Yeonmi Park, an exile from North Korea who has become the darling of right-wing media, has gone as far as to make laughable claims such as that in her homeland trains do not run on electrical power, but rather that humans are forced to push them. (https://www.reddit.com/r/CommunismMemes/comments/pjnegy/fake_stories_go_brrrrrrr/)

It is common knowledge in America that “exiles” who flee their home countries and are welcomed in by the US government for their anti-communism and hostility to their homeland are not credible sources of information. That is why the recent United Nations Office of the High Commissioner on Human Rights is particularly embarrassing, as it relies almost entirely on testimony from such non-credible individuals.

People who fled from the Ugyhur regions of China to the United States or US-aligned countries have every motivation to lie about what they experienced, and almost no motivation to say anything positive about the Chinese government, or anything that might weaken the pre-existing US media narrative. While US media, toeing the anti-China party line, can be expected to engage in one-sided reporting of this kind, UN bodies are held to a higher standard.

The report not only relies on testimony from alleged victims of Chinese detention, but it also interviews their family members who were not even themselves detained. Such “hearsay” testimony would not be admissible in a US courtroom and clearly should have no place in an official UN document attempting to shed light on a serious human rights concern.

Beyond the 26 interviews with people saying things more or less equivalent to “Oh, I was there I saw it! This is exactly what the evil Communist regime did to me! CNN is 100% correct! God Bless America!” The report presented barely any evidence to back up its claims.

The notion that this report obligates China to debunk point by point everything alleged in this testimony, or else it should be assumed to be true is patently absurd. The burden of proof in official proceedings should be on the accuser, not the accused. 26 Non-credible “victim” eye-witnesses along with the “hearsay” testimony of their relatives is simply not enough evidence on which to condemn a major country with rhetoric invoking the Holocaust and the Nuremberg Trials.

Meanwhile, the legality of China’s alleged practices with terror suspects in Uyghur Regions should be compared to the known practices of US officials in Guantanamo Bay. China keeps records of those being detained and provided with vocational training, and there are legal proceedings to determine who is detained. Meanwhile, those held in Guantanamo Bay are being held without charges.

China holds detained individuals in its own facilities, regulated under its own laws, while the United States practiced “extraordinary rendition” handing terror suspects over to other governments in order to be tortured.

While the allegations against China rely simply on the testimony of individuals with incentives to lie, the practices of the US war on terror are openly admitted by US officials.

Who can forget Barack Obama proclaiming to the world “We tortured some folks,” or Gina Haspel being promoted to the rank of CIA director by Trump when it was widely understood that she had defended the use of torture.

The United Nations Office of the High Commissioner on Human Rights should not embarrass itself with sloppy, partisan work as it did with the recent report. International bodies have a responsibility to get to the truth, not simply to feed the agenda of some countries in our increasingly multi-polar world. It should be no surprise that 60 developing countries wrote to the office because “they believed the publication of the report would undermine OHCHR's cooperation with member states.” It should also be no surprise that over 1000 Chinese and foreign non-governmental organizations wrote to the OHCHR as well, urging them to “respect the grave concerns of all the Chinese people and the international community and uphold justice and reject to release the report.” (https://www.globaltimes.cn/page/202209/1274613.shtml)

Those who are concerned about bringing peace and expanding human rights for all of humanity should demand honest reporting and investigation of such issues, and hold those assigned such tasks at the international level to higher standards.

Caleb Maupin is a widely acclaimed speaker, writer, journalist, and political analyst. He has traveled extensively in the Middle East and in Latin America. He was involved with the Occupy Wall Street movement from its early planning stages, and has been involved many struggles for social justice. He is an outspoken advocate of international friendship and cooperation, as well as 21st Century Socialism.