Who but the most expert at disseminating the Big Lie?

Published: September 21, 2022Last Updated on September 22, 2022
Be sure to distribute this article as widely as possible. Pushing back against the Big Lie is really up to you.

By Eric Arthur Blair for the Saker Blog 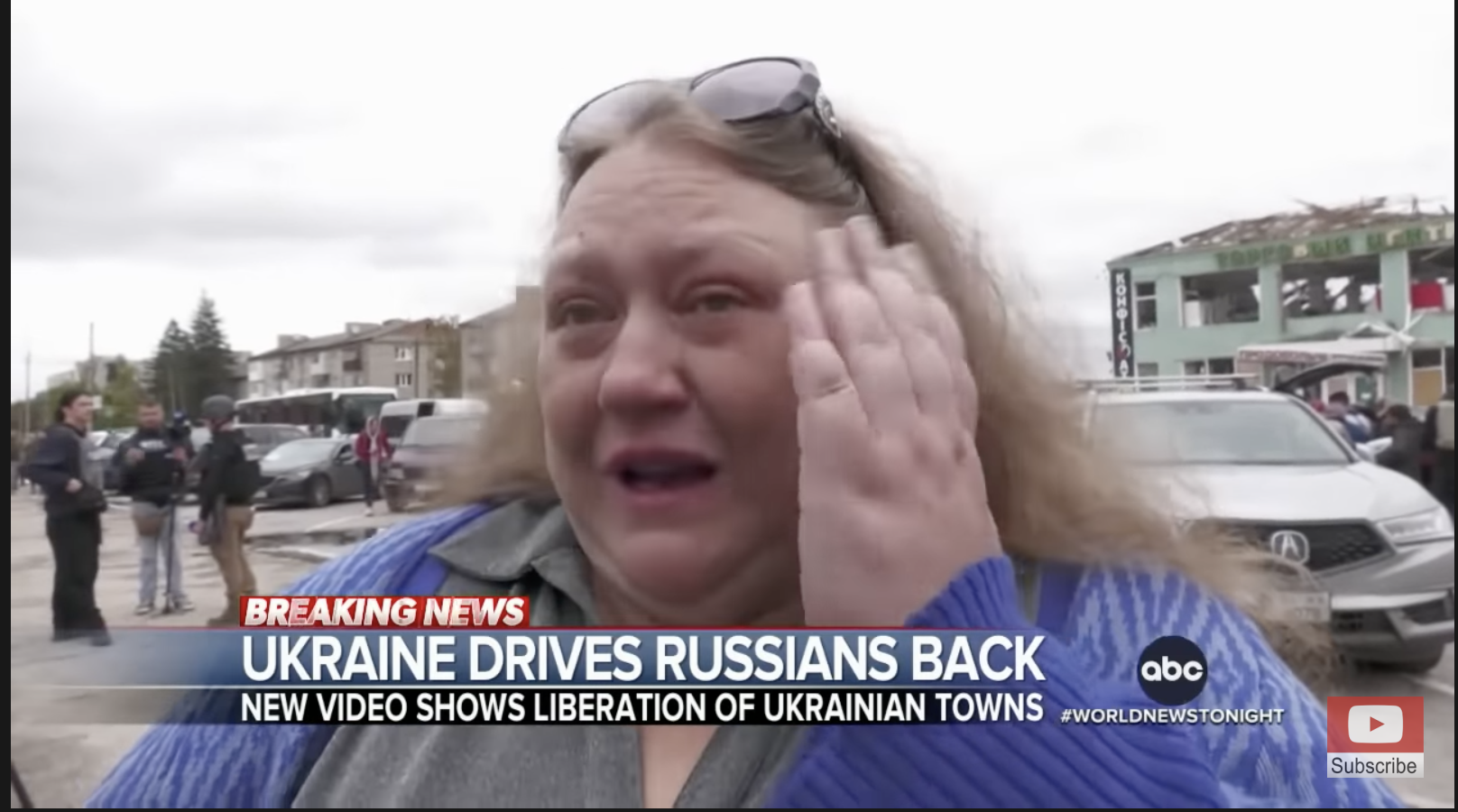 First it must be said that Russia and China are terrible at propaganda. Just hopeless. They are so lousy at propaganda, they have basically given up. In today’s propaganda war with the West, they have failed miserably and lost.

However History is written by the Victors, and all objective evidence today indicates that Eurasia (more inclusively, the BRICS+) will inevitably prevail in today’s new Cold War (short of global nuclear war – in which case everybody dies).

In the bad old days, official declarations from the lofty heights of the Soviet leadership or Communist Party of China delivered on downwards to their citizens were blunt, high-handed and frequently contradicted reality. They had no idea how to carefully craft persuasive messages. The cognitive dissonance afflicting ordinary people in the Soviet Bloc was what George Orwell parodied in 1984, using a fictional pseudo-British setting. Such blatant lies, such clumsy attempts at mind control from officialdom, were an affront to sanity and reason in the real world and simply did not wash. The Soviet and Chinese citizens, while superficially pretending to believe such hamfisted propaganda to appease the officials, completely distrusted the official narratives and sought to discover the truth by other means. They developed healthy scepticism and they forced change within their own societies.

Circumstances have spun around 180 degrees over the past few decades for several reasons:

What about the USA? Fifty years ago the USA arguably had the highest standard of living in the world, hence US citizens largely trusted their government (ignoring the fact that US wealth, particularly following their deindustrialisation, was largely acquired through foreign plunder, exploitation and parasitic freeloading via the Petrodollar). As a nation founded on genocide, slavery, bigotry and racism, with US citizens taught disdain for foreigners from childhood, average Americans would automatically believe any negative news about “the other” (Russia, China, Iran, etc) whether it was true or not. No need to fact-check. Even Americans “of colour” subscribed to such xenophobia and jingoistic nationalism, they were victims of Stockholm syndrome. Many brainwashed descendants of slaves identified with their kidnappers. The scientific study and practical application of propaganda actually originated in the USA. It has now been elevated to such a high art by the Deep State that they have been able to persuade Americans that 2+2 = 5, which the stupid sheeple will swear with tears in their eyes, with one hand waving the tar bangled spanner and the other waving the Ukrainian flag (yellow on top, of course), while screaming their daily two minutes of hate for Putin. Down with Russian cats! Down with Tchaikovsky! Down with the letter Z! Up with *elensky!

What is the real situation in the USA today?

I have obtained permission to reproduce the striking “sheeple” diagram below (so long as I provide attribution). I find it a useful visual explanation for the prevailing AngloEuroZionist mindset. More detailed background regarding the diagram can be found in the article from which it originated, downloadable from here: https://www.youtube.com/watch?v=MwwY2c16I4w or here (direct link to document): https://www.dropbox.com/s/nio185d72vkqkpc/ChannellingTrout_full_compressed.pdf?dl=0  (see page 187, appendix three after the novella). That article mentioned Edward Bernays and various psychological studies on persuasion and conformity. 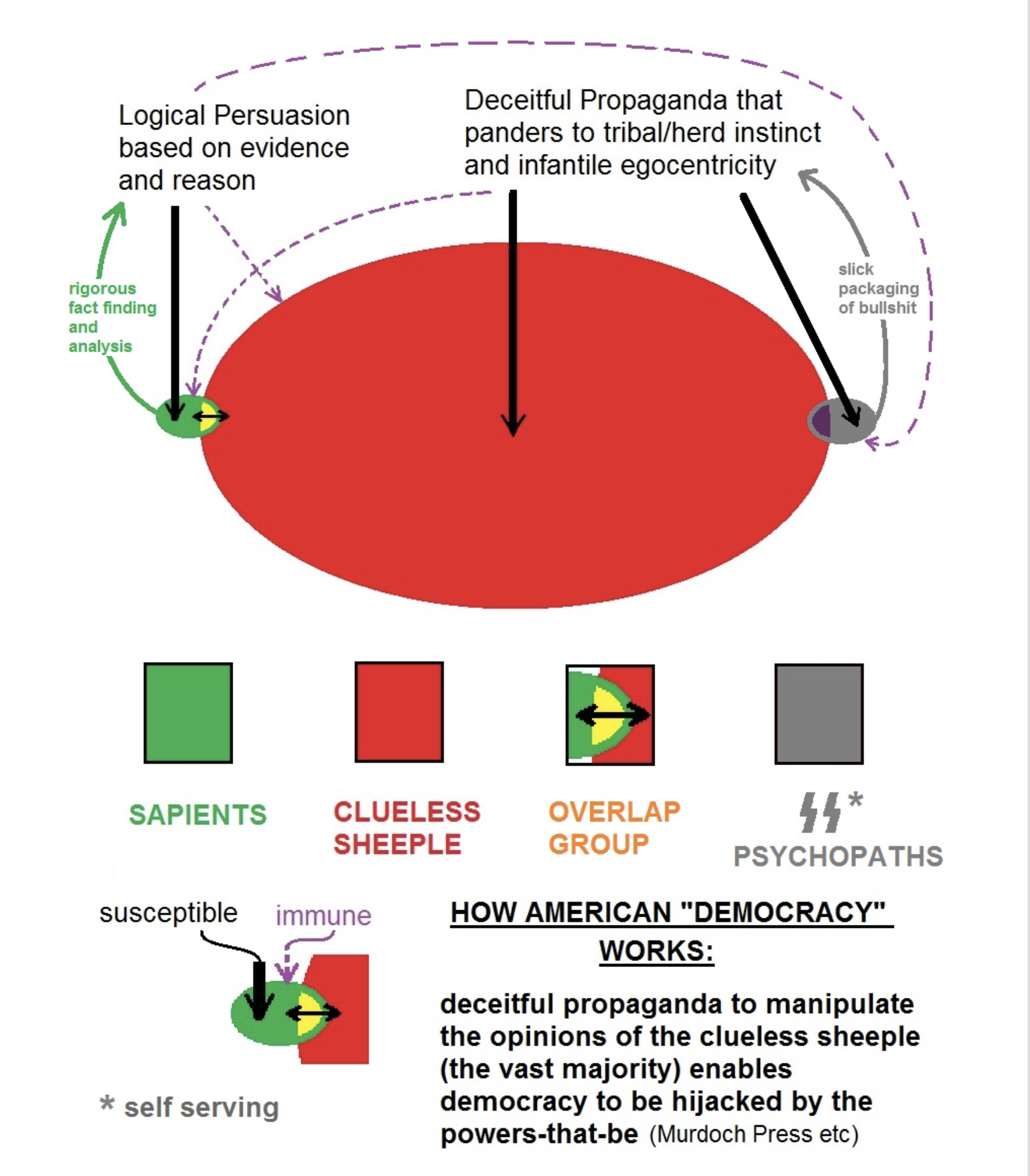 While bemoaning the supine prostitution of the Western Mainstream Media, it is also important to pay tribute to the courageous independent journalists, writers, analysts, whistle-blowers and documentarians who are trying to uphold and preserve some semblance of integrity, decency and sanity in the West. I will no doubt forget to mention some very important names (for which I apologise in advance) but here are just a few:

What do they have in common apart from speaking Truth and advocating Peace? They have been smeared as “Russian/Chinese agents” and/or sources of “disinformation” and/or they have suffered cyber attacks and/or have been censored from mainstream platforms by the corporate and state powers. Julian Assange is in prison, being slowly murdered.

The AngloEuroZionist Empire claim to uphold the principle of Free Speech as sacrosanct. Orwellian much? Such sanctimonious hypocrisy is truly sick-making. Simple rule of thumb: for everything they claim, it is best to believe the very opposite.

The USA claims to be a freedom-loving democracy. Reality: they are a violently oppressive fascist oligarchy that deny innocent children freedom from the terror of being gunned down in school.

The USA claims Russia is an authoritarian dictatorship. Reality: Russia is a de-facto democracy (albeit with some troublesome oligarchs) that tolerates responsible free speech.

The USA claims Taiwan is being oppressed by China. The USA is prodding the Taiwanese to declare independence for the sake of their “freedom”. Reality: If Washington-stooge Taiwanese “leaders” declare “independence”, they will be condemning the Taiwanese people to ongoing vassalage by the US empire, which is happy to fight China to the last Taiwanese. The USA sees the Taiwanese as disposable cannon fodder, just as Ukrainians are disposable cannon fodder. Is it just possible that the Taiwanese may be a little bit smarter than the Germans who are now committing economic suicide, or the Ukrainians who are now committing actual suicide on behalf of the psychopathic US neocons? Consider the alternative: if Taiwan merges with China, the resultant political and economic union, the tearing down of barriers and the ramping up of cooperative ventures, will inevitably make the Taiwanese richer. No question. The lucrative tourism opportunities alone are mind-boggling. Furthermore if a major disaster strikes like a typhoon or earthquake, the immense capacity of mainland China will be rapidly mobilised to bring in massive supplies, food and power generators to aid the Taiwanese people. Mainland China will help rebuild Taiwanese hospitals, roads, railways and schools for free. Why? Because China sees the Taiwanese people as Chinese people.

That is the nefarious diabolical moustache-twirling Chinese plot for their “reconquest” of Taiwan: to make the Taiwanese even richer than they already are and to deliver prompt massive humanitarian aid, free of charge, should any disaster strike. Pure evil.

—EAB
Erratum: quote attributed to Mao was actually by Deng
Addendum: the reason why many people may not be aware of police violence against BLM protesters is because that news was censored from most mainstream media platforms

(1) The author is most generous in listing some of the people who toil in the information wilderness the West's disinformation machine has relegated them to. But, as EAB knows first-hand, (and graciously acknowledges), no such list can ever be complete. Because of that, we'd like to offer some other names that also very much deserve mention. They include hard-working and increasingly influential counter-disinformation (and anti-imperialist) voices like Max Parry, Jimmy Dore, Alan Macleod, Jeff J. Brown (China Rising dispatch), Margaret Berkeley (Black Agenda Report), Ed Curtin, Ron Ridenour, Jim Kavanagh, Paul Edwards, Ramin Mazaheri, Fiorella Isabel, Jackson Hinkle—currently the subject of an apparent smear campaign— and, of course, Brian Berletic, the irrepressible force behind The New Atlas, formerly Land Destroyer.

Addendum
Despite protestations of fierce independence and purity, government propaganda is now common throughout "the West". Having successfully banned, censored and defamed truthful voices as purveyors of "fake news", or operating as "foreign agents", not to mention cynically staffed their newsrooms with "career journalists" eager to peddle the ruling oligarchs' favorite version of reality in return for grotesque riches and fame, the so-called "liberal democracies" (in reality fascistoid hyper-hypocritical imperialist power aggregations), have now designated their own mainstream communications entities (including, of course, the powerful social media platforms), as the only credible sources of truth. By this cheap trick, they hope to control the increasingly porous "global narrative", a task which their own ineptitude and ever bolder criminality makes progressively more difficult.  As usual, the Anglo-Zionist nations (the head of today's world hegemon), who first perfected marketing and p.r. as inevitable offshoots of mature capitalism, lead the pack, with most media in vassal nations (themselves in the hands of corrupt comprador elites) repeating their self-serving nonsense. This is not the place to go into a deep dissection of the modern techniques of disinformation, as practiced in the West. Suffice it to say most if not all "news" —except for weather reports, trivia, sports scores and other subjects of no political consequence—is impregnated today with intentional vices of omission, elimination of historical context, half-truths, and outright lies, the bigger the better. Orwellian inversion of fact—up is down, black is white, full is empty, etc—is everywhere. And in all instances, the object is always to protect and strengthen the oligarchs' class rule. In that manner is massive confusion created and reality denied. Social truth is always subversive to the powers of the few.
-The Editor

Below, some recent examples of high-handed mendacity on these openly official and de facto state platforms. 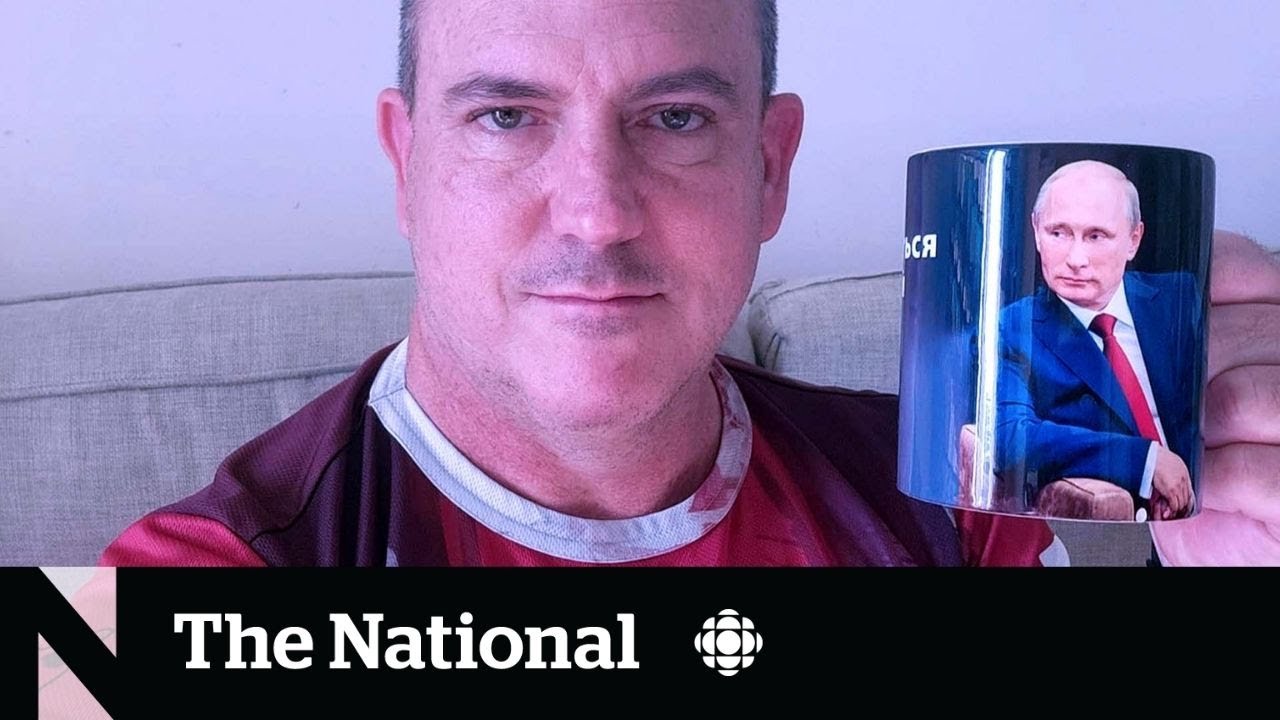 CBC News: The National / Ju 5, 2022
WARNING: This story contains graphic images | When it comes to pushing propaganda about the war in Ukraine, Russian President Vladamir Putin has help from a group of Westerners with long histories of peddling disinformation, including John Mark Dougan and Canadian Eva Bartlett. The National is CBC's flagship nightly news program, featuring the day's top stories with in-depth and original journalism, with hosts Adrienne Arsenault and Andrew Chang in Toronto, Ian Hanomansing in Vancouver and the CBC's chief political correspondent, Rosemary Barton in Ottawa. 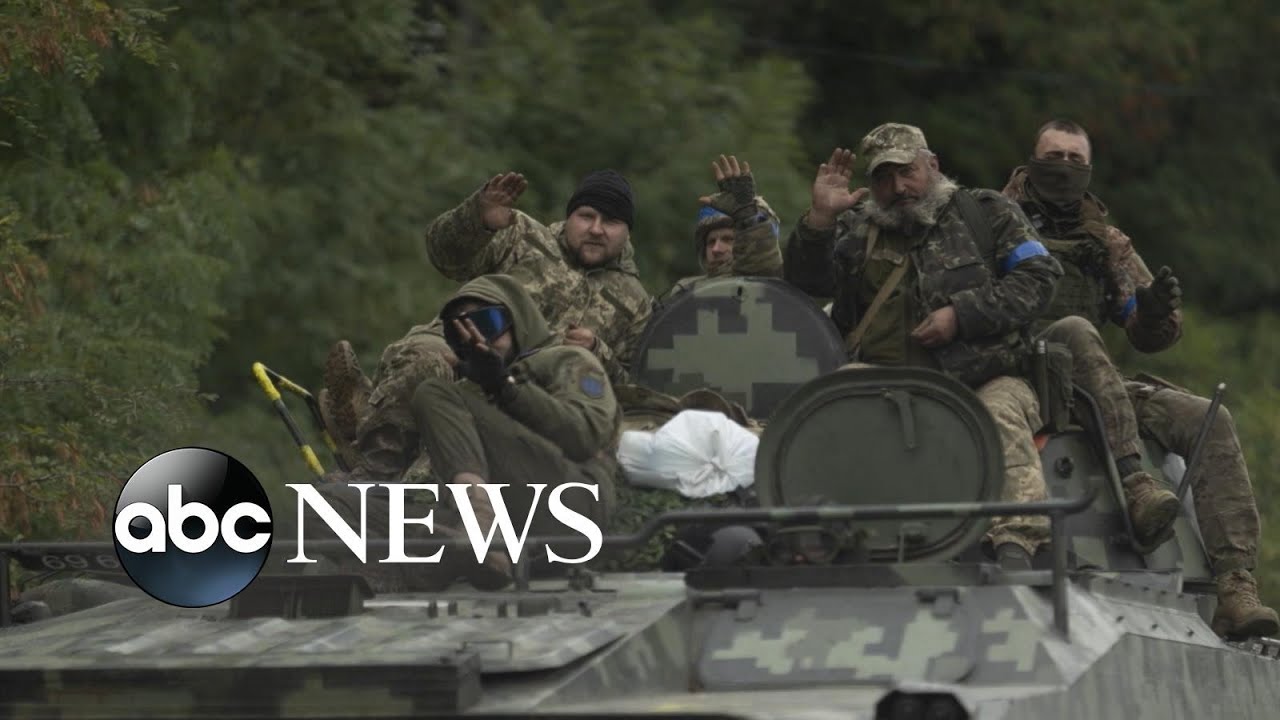 A “red line” in innocent blood: US M777 howitzer massacre civilians in Donetsk

Russia will mobilize about 1.2% of her mobilizational potential (UPDATED!)