Interview with the Minister of Defence of the Russian Federation General of the Army Sergei Shoigu.

Interview of the Minister of Defence of the Russian Federation General of the Army Sergei Shoigu. 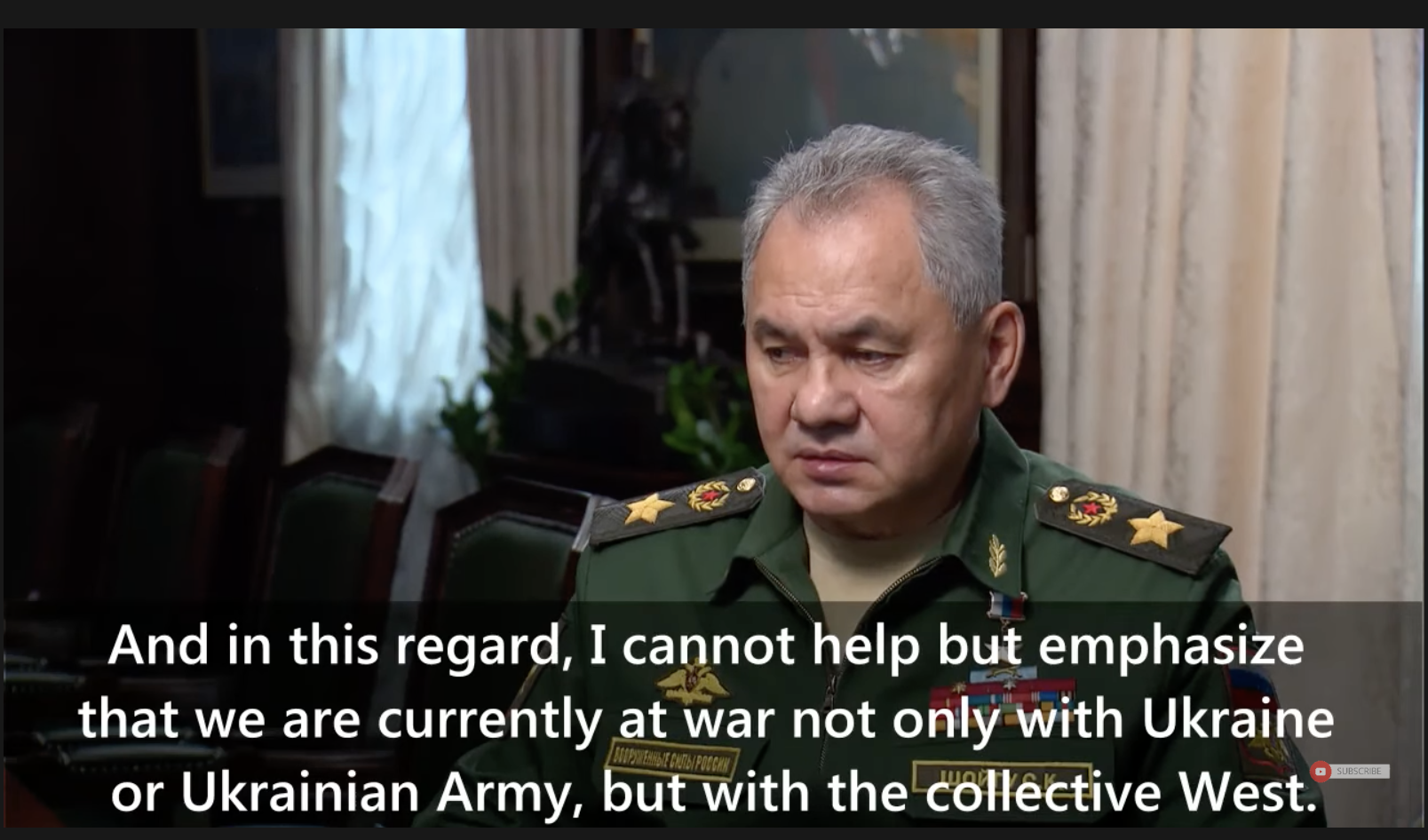 According to Alexander Dugin in geopolitika.ru today: The current situation lets itself be reduced to the following pattern. “We are speaking about the situation in Ukraine that is becoming the beginning of a real world war. Like all patterns (models) this simplifies the reality but at the same time makes it meaningful.”

Yesterday I listened to Colonel Douglas Macgregor (a lone voice of sanity it seems in the US) on the Youtube channel of Judge Napolitano – Judging Freedom. He had been on a holiday and was surprised to learn how uninterested the people he met were about the situation in Ukraine. Americans are not interested in Ukraine, he said.

Looking at the newspaper headlines today, I see the same lack of interest in Vladimir Putin’s announcement. Squabbles and scandals are more interesting to the tabloids. The more serious newspapers mix the announcements of the recent developments with assessments of Russia losing the military conflict and its economy being in dire straits, both of which are not the case.

People who think that the US striving for world domination in a multi-polar world is not culpable should review the rise of the PNAC in the 1990s, as well as the events of 2014, 2015 and 2019 in Ukraine.

The situation is morphing into the beginning of a real world war. Those people in the US and their loyal and subservient allies here in Europe – don’t they care about the world steering to a world war? For the last 77 years only proxy wars were considered to be possible between superpowers. Is a war between superpowers armed with nuclear weapons possible? People in the West should know that their governments are interested in trying that out, both in Ukraine and in Taiwan. They should get informed and not go into denial.

Thank you Beatus.That is a wonderful post. And may God bless you.

First time I’d heard a count of the losses of Russia.  He also stated Russians go back to battle after hospital.

I am proud to have been born in Russia, and I hope California becomes a better place ,
else I shall have to leave the land of Nazie Pelosie and their ill ilk.

How can anyone vote for these American losers, or do they?
I did not…

Many have, over the many years, wondered what you wonder: ‘How can anyone vote for these losers”?

Answer: apparently, given what we saw done so brazenly in November 2020, they did not receive the most votes. The voting process has been rigged in favor of Pelosi, and the mayors of NYC and Chicago, and the governor of California, and many others for many years.

And, I am afraid that the Cabal has figured out a way to steal the Mid-Term elections too. Otherwise they would lose the House and Senate so badly that they’d be powerless – and being powerless is their worse nightmare.

Liz Truss is the new Prime Minister of the UK. WaPo says, “She was selected by 0.3 percent of the population.” That’s democracy!

A very impressive interview. I just read some headlines in our Western press:

The Netherlands:
„Rutte over mobilisatie Rusland: ’Poetin lijkt in paniek’
„Rutte on mobilization Russia: ’Putin seems to be in panic’

This is what you read, hear and see on TV in Europe. No discussions about the death of civilians recently in Donetsk,
not one journalist asking: what did we do wrong?  They really believe they will prevail. I think, according to some comments from Shoigu, that we soon will see some satellites downed and some “decisions centers” hit.
As for me, here in the mountains in France, I’m cutting as much dry wood as possible.

Interview of the Minister of Defence of the Russian Federation General of the Army Sergei Shoigu.