Home AMERICAN BRAINWASH Why are corporations blamed, instead of the billionaires who control them?

Why are corporations blamed, instead of the billionaires who control them?

The belief in the magic qualities of the Free Market, worshipped by Libertarians, has a lot to do with this high-handed con

September 28, 2022 8 minutes read
Please make sure these dispatches reach as many readers as possible. Share with kin, friends and workmates and ask them to do likewise. 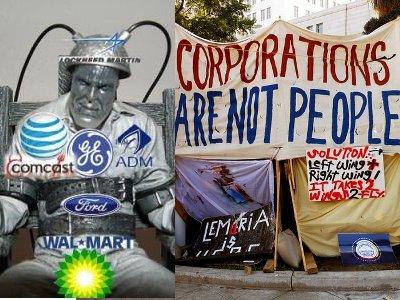 A classic “Cui bono?” explanation looks first to determine whom the beneficiaries from a crime are, and then seeks for possible evidence that those persons who benefit from the crime had initiated the crime — perhaps hired the agents who had carried out the crime. Those agents are then sought for and investigated in order to find evidence that they had been rewarded by the crime’s beneficiaries, for having perpetrated the crime. In a “Cui bono?” approach to justice, those who created and organized and hired the crime would get the severest punishment for that crime; their mere agents would receive lower sentences. However, in our popular media, the closest that normally is done to adhere to this methodology for finding an explanation and assigning blame is to identify corporation(s) that MIGHT have benefited from the crime. Then, ultimately, if there is to be any prosecution at all against those possible beneficiaries, only the lower level of the corporation’s employees who had been incentivized by its top management to do the crime are pursued by the law, and the corporation’s controlling investors — whom those peons had been actually those investors’ agents, working on their behalf — suffer, at most, nothing more than a fraction of 1% of the corporation’s annual profits as slap-on-the-wrist fines, and even less than that percentage of their own stock-value in the corporation. So: if there is any prosecution against the corporation, that firm’s investors are held harmless, protected by the law. This is NOT a “Cui bono?” system of justice; it is, at best, a ‘Cui bono?’ system of ‘justice’ — actually, a system of injustice.

The same persons who control the major corporations — and almost all of them are billionaires, who are the approximately 1,000 wealthiest individuals in the United States and control not only all of the major corporations but also those corporations’ hired lobbyists, and also all of the major news-media — are the major donors to the political Parties, and to the PACs that also fund those; and they thereby control also the U.S. Government, via those agents (including virtually everyone in Congress) and their millions of sub-agents who are the employees of those agencies.

In such a situation, how can justice be even possible? Those billionaires — both the ones who fund the Democratic Party, and the ones who fund the Republican Party — are well-represented by this Government, but the general public is represented almost not at all by it. So, the question is: How does the public become successfully fooled to believe that they live in a democracy?

I shall propose here what I believe to be the answer, which explains how this con-job is done:

The dominant ideology of these countries is called in the United States “libertarianism” and in Europe “neoliberalism,” and it holds that even if the Government is unjust (or unfair), the economy is just (or fair) if it is “free” — as unsubject to the political power (the government) as possible. The underlying belief is that corruption comes from the government and NOT from the economy itself. Consequently: corruption comes from the holders of public offices, but NOT from the corporations UNLESS there are “a few bad apples” in that lot, who do what the corporation doesn’t want them to do. At worst: corporations are “negligent,” in this scenario. The economy ITSELF is not systematically corrupt. Consequently, the billionaires are to be viewed more as “wealth-creators” by means of their investments, than as being, by any means, the incentivizers of crimes against the public, often exploiting the public and profiting thereby.

Karl Marx is generally held to be the founder of “The Left,” and he blamed “the bourgeoisie” or middle economic class, as being the exploiters and the persons who benefit from capitalism or a free market. He did not blame the aristocracy — the top economic class, who control the corporations and constitute what today are commonly called “billionaires” — for political problems. He really believed that the middle class — and NOT or NOT ONLY the super-rich — are the cause of society’s injustices. If he had blamed “the aristocracy” (the wealthiest class), then he would never have been able to win the financial support from the aristocracy that he did and which enabled him to publish. So: he blamed “the bourgeoisie” INSTEAD OF “the aristocracy.” Consequently: leftism became corrupted, even at its very start. It was corrupted BY the aristocracy.

Marx blamed ALL STOCKHOLDERS, and not ONLY the ones who own the controlling blocks of stock in the major corporations — not ONLY “the aristocracy” — and this is the reason why the Soviets purged the “kulaks” or small-business owners, and not ONLY the few individuals who had held the vast majority of the nation’s wealth.

A good example of this leftist mentality is a recent article by, and news-interview video of, a leftist news-analyst, Thomas Fazi. The article was titled “Civil disobedience is coming”, and at 4:50 in the video-interview of him about it, he was asked, “Who are these people? Who is benefitting from all of these bad things?” and Fazi answered: “Well, it’s the usual suspects. If we take Covid, we know that the lockdowns, the Covid measures, they caused immense harm to most citizens, they caused immense harm to small and medium businesses, but they allowed Big Tech, Big Pharma companies, to reap in billions, tens of billions in profits, and to acquire even more power than they already had. .. If we look at the current crisis, it’s exactly the same. In this case, we’re ... talking about Big Oil, Big Energy, Big Gas.” The major funders of Britain’s Labour Party, and of America’s Democratic Party, could hire or sub-contract to such a writer, just as the liberal aristocrats during Marx’s time funded him and his work. It holds the corporations responsible — WHEN it does — ONLY in such ways as to protect the biggest beneficiaries of corporate crimes.

But such thinking is not progressive; it is not conducive to increasing democracy, and to equal rights and obligations of each and every person, under the law, and which contains no systematic favoritism toward the super-rich, and no systematic denigration and further weakening of the very poor.

Ultimately, such leftism is remarkably close to neoliberalism (libertarianism), because it accepts the view that the billionaires hire people to promote to the public: that billionaires are “entrepreneurs” instead of “exploiters,” and that they had gotten so rich because they had earned every cent of it and not depended upon the state and its (billionaires’-created) system in order to become so rich. This billionaires-funded view makes fundamentally no distinction, except Fazi’s rhetorical one, between those “small and medium businesses” on the one hand, versus such international megacorporations as ExxonMobil and Lockheed Martin on the other. AND it focuses blame against “corporations” INSTEAD OF against the individual beneficiaries from its crimes. That leftism is a false, crippled, leftism, not authentic progressivism, which DOES AND CONSISTENTLY make that distinction — by identifying the billionaires who actually CONTROL those giant corporations, and by seeking to get the laws changed so as to finally provide ACCOUNTABILITY to “Cui bono?” Obviously, billionaires will not fund writers such as that, progressive ones.

About the author
Investigative historian Eric Zuesse’s new book, AMERICA’S EMPIRE OF EVIL: Hitler’s Posthumous Victory, and Why the Social Sciences Need to Change, is about how America took over the world after World War II in order to enslave it to U.S.-and-allied billionaires. Their cartels extract the world’s wealth by control of not only their ‘news’ media but the social ‘sciences’ — duping the public.

SEARCHLIGHT: The World on the Brink of War / A Roundup of Insightful Commentary