Plus, a letter to Stephen Zunes from an Iranian student

October 22, 2022 7 minutes read
Please make sure these dispatches reach as many readers as possible. Share with kin, friends and workmates and ask them to do likewise. 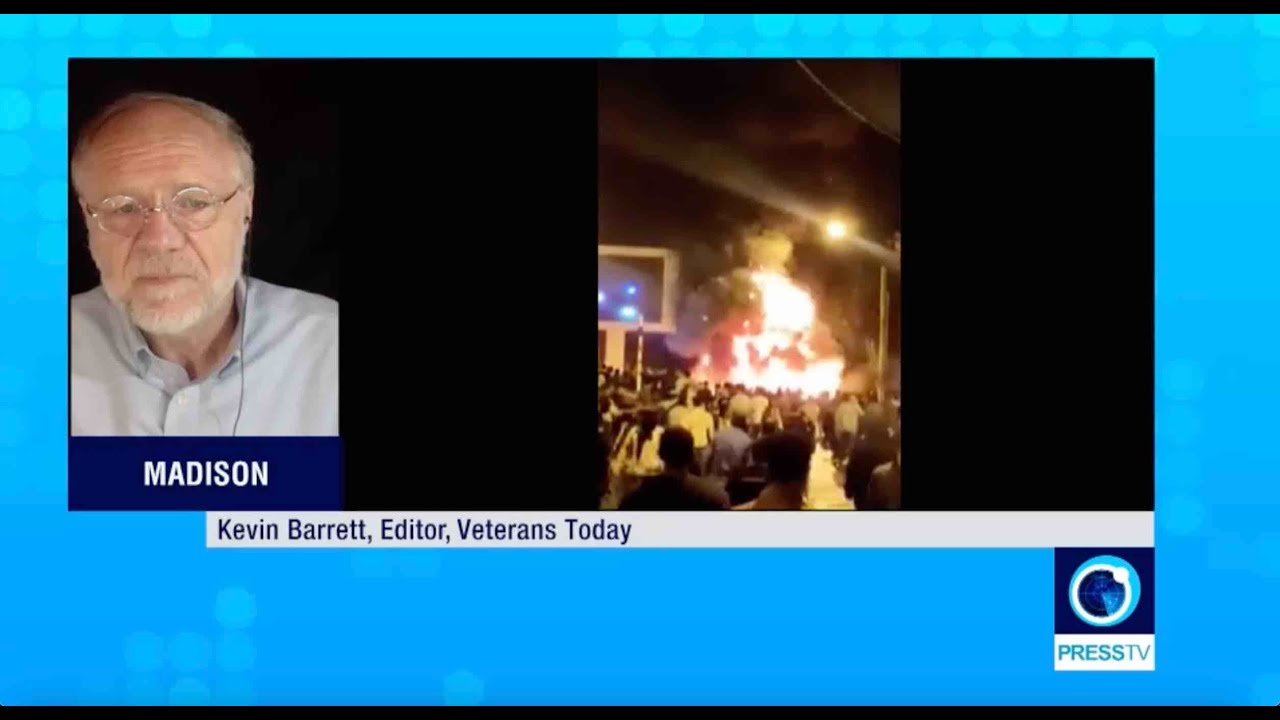 When the CIA overthrew the democratically-elected Mossadegh government in 1953, it brought rent-a-mobs into the streets of Tehran to provide cover for the coup. Were the riots that broke out in Iran last week the latest iteration of the CIA's rent-a-mob coup strategy?

Professor Stephen Zunes, a voice of relative reason and moderation on some Middle East issues, has lately been functioning as a de facto CIA propagandist by tweeting out made-in-Langley images casting the current US destabilization effort in Iran as a homegrown protest of poor oppressed women who hate their own culture’s dress code. (1) In fact, the counterprotests by supporters of the Supreme Leader, the Islamic Republic, and its indigenous religiously-sanctioned non-Western dress code have brought vastly bigger crowds into the streets—crowds full of proud hijab-wearing Muslim women—than any of the US-incited pro-West protests and rent-a-mob riots. But the huge pro-Islam demonstrations are ignored by Western media, while the much smaller CIA-funded anti-Islam ones get all the coverage. 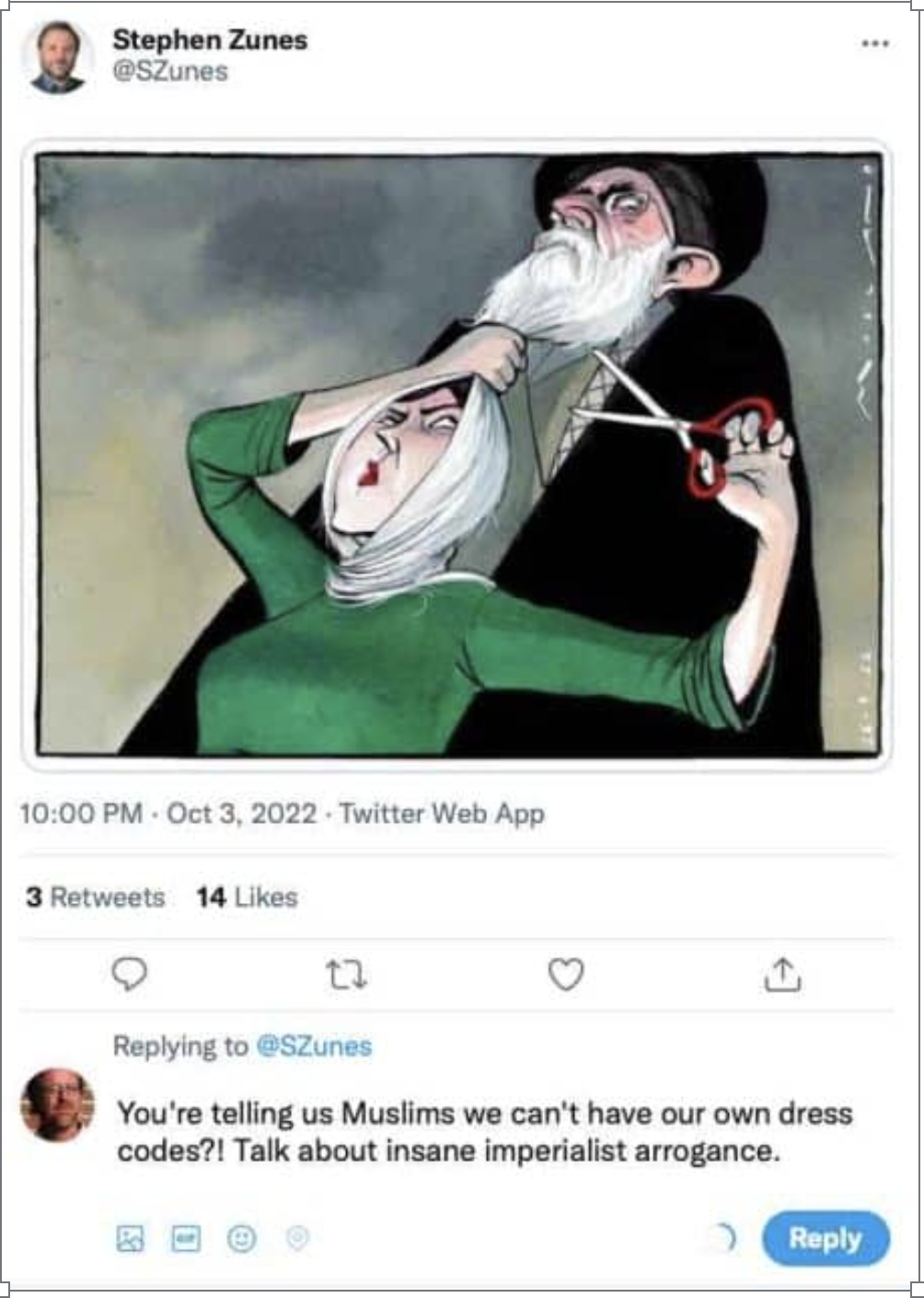 Stephen Zunes presumably not only wants to abolish Islamic dress codes, along with much of the rest of the religion of Islam—making him a participant in cultural genocide—but he probably also supports the maniacs who are brainwashing American children into doubting which gender they belong to so that they can be ritually sexually mutilated, all in the name of “tolerance” and “diversity.”  The Ayatollah Khomeini and now Vladimir Putin are right: The West is possessed by Satan, and even most of its relatively reasonable people are demon-possessed in their fanatical hatred of traditional religion and family values.

Below is a short letter to Stephen Zunes from a student at Tehran University. 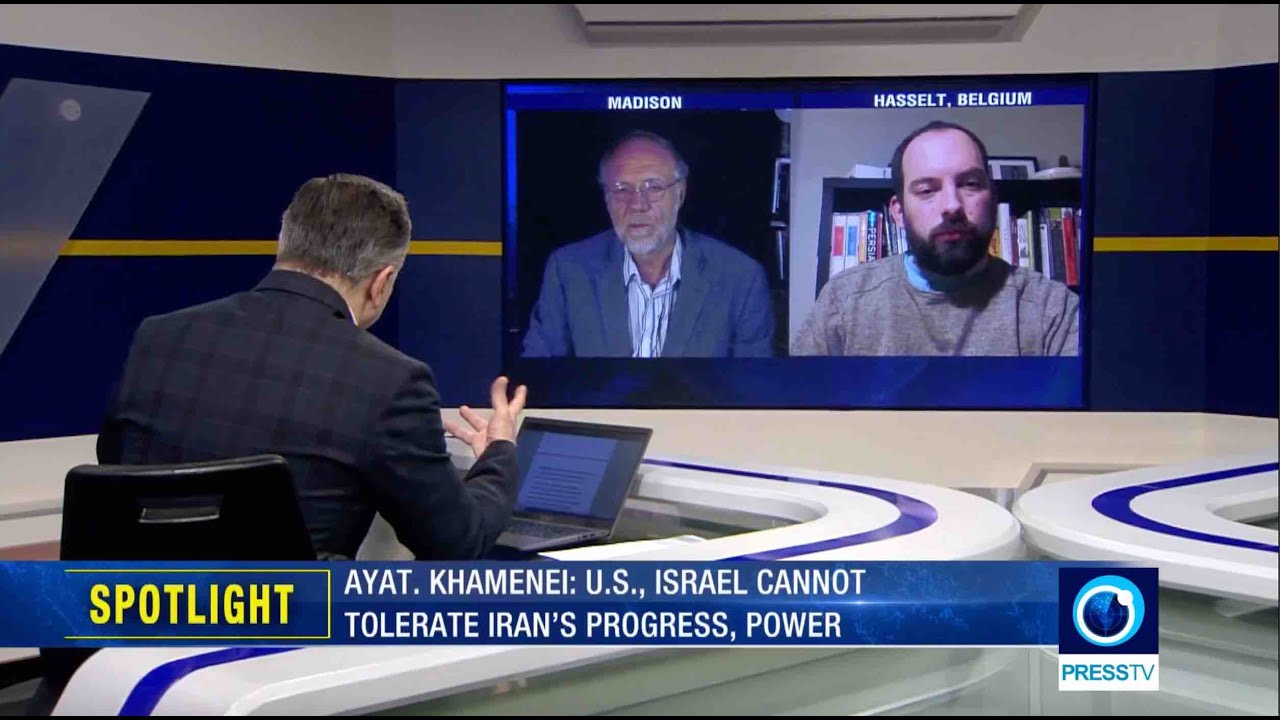 By an Iranian student—

A short and spontaneous letter to professor Stephen Zunes

The problem with the US is these academicians who claim to work and write on Iran for years and yet have no understanding of how the society and its various complex classes function. I have lived in Tehran since 2013 and know that it’s not at all easy to analyse the nation as a whole and yet some folks like you use the word “people / popular” without having any contact with the realities on the ground, instead just being brainwashed by the media. I’m a student at Tehran University and I  have witnessed close-up what you pretend to get from dubious, cherry-picked (by CIA etc.) video clips. I went out last week (on Sunday) with my little brother (high school). Huuuuge rally in Tehran. People came to the street to support the state and yet you call some rioters “the people” because you saw prefab propaganda clips on social media LOL. Why? Because the pro-Islamic Republic rallies, much larger than the others, are not covered by the mainstream media where you live.

Why have all these regime change attempts never worked?

I’m talking about the spying from the former US embassy (I went there with former NSA officer Wayne Madsen  who was surprised at the advancement of espionage system used in the embassy and said “this wasthe most sophisticated espionage apparatus at the time known in the US”).  Then 8 years of supplying Saddam with chemical weapons, sanctions, the assassination of Iran’s 🇮🇷 nuclear scientists, and spending billions to sponsor the MEK and other mercenaries such as Masih Alinejad etc.

Tell your CIA friends the reason that all they have done to Iran since the overthrowing of government in 1953 did not work is that they don’t understand the complexity of Iranian society:)

Putting the revolutionary guards and Army and Basij aside, imagine in the worse case scenario that only 10% of Iranians support the Islamic Republic and are ready to defend the state and the Leader till the last minute of their lives. That means CIA-paid agents have no other option than slaughtering at least 8 million Iranians. Note that people who came out to the street to show their solidarity with Leader were not members of IRGC, neither army or Basij but very ordinary people (middle class as you call them in the US). It’s not easy to get rid of them dear Steve.

Not only for Iran but in the Middle East I strongly believe the main reason behind the failures of US officials’ plots over the years is that sociologically & psychologically they do not understand how the different parts of these societies function. Even myself as an Iranian, if I’m not monitoring Iraq in detail I can never have a clear understanding of its society. Meanwhile, some people from DC, Paris or London with no realistic ties with citizens living there write books & articles. Good luck with that.

On the other hand, I totally agree that it’s in the Iranian constitution that people can peacefully rally. But the mercenaries paid by your government prevent Iranians from exercising that right by invariably intervening and not letting these social movements be entirely independent. So the support of POTUS and Western leaders and intelligence services of some social movements, and their weaponization, deprive us of our basic rights enshrined in our constitution. So if you would like to help Iran and Iranians, step back, support no one, do not intervene, and let our movements be natural and local. When you turn it into an international issue, indeed Iran will defend its sovereignty and national security interests.

Notes
(1) Zunes has actually been decidedly if deviously pro-imperialist in his work for many years.

Democracy, the Most Dangerous Religion: Part 1

Wonderful letter by an Iranian. Quote:”So if you would like to help Iran and Iranians, step back, support no one, do not intervene, and let our movements be natural and local”. And that is the prayer in so many countries that have been interfered with, attacked and brought to heels by the West, the last seventy-five years led by an ignorant and aggressive US. The absurd capitalist “Gleichschaltung’ which includes men and women, is un-naturally brought to bear by force on other populations, which have nothing in common culturally or historically with the West. Like in a Procrustus bed they are… Read more »