The (increasingly) Disunited States of America 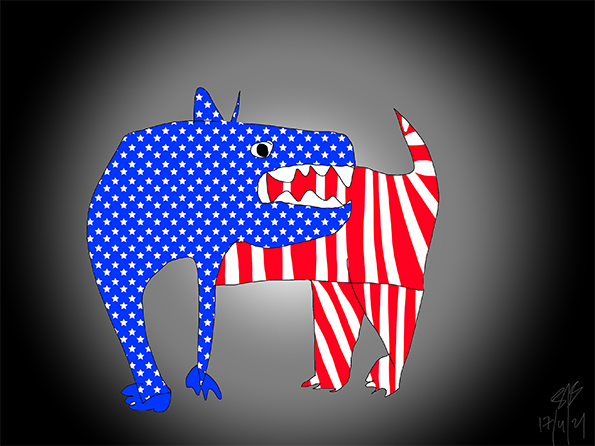 Republicans and Democrats both claim democracy will die if they don’t win the midterms on 8 November. Each party says the other is not just defending unworkable or reprehensible ideas but is in fact an enemy, a foreign body, immoral and subversive (1). This paranoid reflex, formerly reserved for Native Americans, African Americans and communists, now targets tens of millions of ‘deplorables’, ‘semi-fascists’ and ‘totalitarians’ — that is to say Republicans, according to Democrats, or Democrats according to Republicans. Political discourse is loaded with references to the 1930s, conflict between Sunni and Shia Muslims, and the Civil War.

Every morning Americans find their inboxes full of unsolicited emails in garish colours, littered with words in all-caps. On 18 September, the Democrats wrote, ‘20,000 signatures needed by 11.59: Sign to arrest Donald Trump. We are INCHES away from delivering Trump to JUSTICE. But we need HUGE public support to get there.’ Next day, Trump fired back, ‘Radical Big Tech companies are trying to SILENCE our voices ... Big Tech and their corrupt partners in the mainstream media are working overtime to censor and silence Republicans ... The only way to save our country and stop the radical Left’s socialist agenda is by electing America First Republicans [supported by Trump] to the Senate.’

There’s one area where this acrimonious standoff is absent: defending the empire. America’s political class agrees on standing up to Russia, arming Ukraine, containing China, supporting Israel and taming the EU. The proof? No one’s talking about it.

In August, Joe Biden invited a group of liberal academics, historians and journalists to the White House. They included historian Michael Beschloss, whose rhetoric has inspired some of Biden’s speeches. Since the attack on the Capitol, the constant refrain has been, ‘We are all in existential danger of having our democracy and democracies around the world destroyed’ (2). This will be the Democrats’ campaign message in 2024, allowing them to link stopping Trump with taking on Russia and China.

With US states taking opposing decisions on abortion, education, criminal justice, or allowing in migrants — according to whether they are Republican or Democrat — both sides have a nagging doubt: is there any point in trying to hold such disunited states together? Republican governors in Texas or Florida are quick to send undocumented migrants on to more welcoming states such as New York or Massachusetts; and respected publications now routinely talk of secession: ‘America is already virtually a binational state, with two sharply opposed national communities comparable in size and political strength’ (3).

There’s one area where this acrimonious standoff is absent: defending the empire. America’s political class agrees on standing up to Russia, arming Ukraine, containing China, supporting Israel and taming the EU. The proof? No one’s talking about it.

Translated by Charles Goulden
About the author
Serge Halimi is president and editorial director of Le Monde diplomatique.