Why Did U.S. Prioritize Containing Russia Over China?

October 31, 2022 9 minutes read
Please make sure these dispatches reach as many readers as possible. Share with kin, friends and workmates and ask them to do likewise. 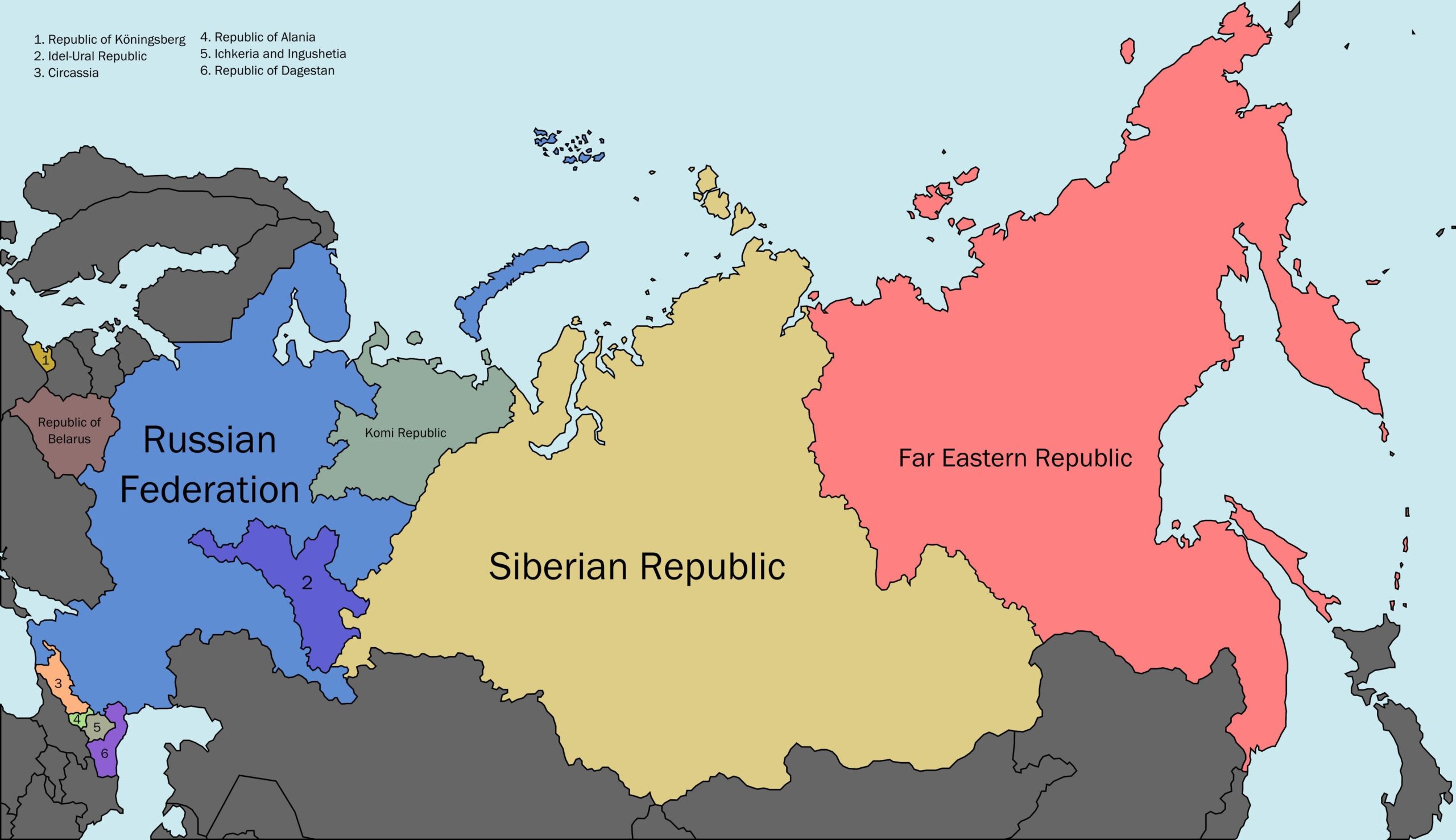 The West's wet dream: Russia broken up into smaller components.

Experts are scrambling to explain why the U.S. prioritized containing Russia over China despite most prior indicators very strongly suggesting that it would prioritize the second scenario. U.S. President Joe Biden largely continued his predecessor Donald Trump’s muscular approach towards the People’s Republic up until around last fall, when the latest tensions in Europe became impossible to deny. Even so, few anywhere in the world predicted the sequence of events that would be set into motion at the end of last month wherein Russia commenced its special military operation in Ukraine.

Russian President Vladimir Putin articulated the aims of this campaign in his 24 February address to his nation. He said that the initial intent is to stop Kiev’s genocidal onslaught on the newly recognized Donbass Republics, after it provoked a third round of civil war hostilities with Washington’s backing. The Russian leader also claimed that NATO clandestinely established military infrastructure in the former Soviet Republic for the purpose of carrying out a surprise attack against his country sometime in the future. This would presumably come after the U.S. neutralized Russia’s nuclear second-strike capabilities.

That supplementary goal was being advanced by the U.S. continued deployment of “anti-missile systems” and strike weapons near Russia’s borders. President Putin became so concerned about this in late December that he ordered his government to publish its security guarantee requests to the U.S. and NATO at that time. Moscow asked for legally binding guarantees preventing NATO’s eastwards expansion, the removal of strike weapons near Russia’s borders, and a return to the continental military status quo enshrined in the now-defunct 1997 Russian-NATO Founding Act.

These were rebuffed by the West, after which President Putin felt compelled to authorize kinetic action to uphold the integrity of his country’s national security red lines in Ukraine and Europe more broadly. Russia’s prior diplomatic attempts to revise the European security architecture with a view towards finally making security indivisible in line with the OSCE’s associated principles failed. The U.S. and its allies continued making moves on the pretext of ensuring their own security that ultimately eroded Russia’s own. This hostile strategy is what truly set the sequence of events into motion long ago.

Having explained the backdrop to recent events, it is now time to explore why the U.S. refused to resolve this undeclared security dilemma in Europe with Russia diplomatically. The Biden-Putin Summit in Geneva last summer gave hope to those who thought that the U.S. would finally negotiate with Russia in good faith so as to free up its permanent military, intelligence, and diplomatic bureaucracies (“the deep state”) to focus much more on containing China instead of Russia. The parallel negotiations to reach a new Iranian nuclear deal suggested that the U.S. would do the same vis-à-vis the Islamic Republic, too.

These calculations seemingly changed sometime around last fall, when everything began to get much more intense in Europe. A decision had apparently been made to not sincerely negotiate with Russia in good faith and, if anything, perhaps even provoke the Kremlin into taking the kinetic action that U.S. intelligence subsequently claimed that it was preparing to authorize. On the surface, it doesn’t make much sense why America would try to goad Russia into carrying out military action in Ukraine, but the developments that followed help answer that question.

Simply put, the U.S. very clearly had a detailed plan to exploit that dramatic scenario for the purpose of advancing the unprecedented containment of Russia in full coordination with its NATO allies. With that anti-Russian military bloc having lost its raison d’être after the end of what can in hindsight be described as the Old Cold War, the U.S. felt that it needed to reshape European perceptions in such a way as to revive the so-called “Russian threat" to galvanize the West under its hegemonic influence. Purposely violating Russia’s national security red lines in Ukraine and the region was part of this plan.

Russia was thrown on the horns of a dilemma, whereby it could either sit back and let these latent threats continue unfolding until they finally resulted in placing the country in a position of perpetual blackmail by the West or take decisive military action aimed at averting that scenario, despite the enormous costs to its macroecnomic stability. The blackmail that could have been attempted would have likely concerned Ukraine’s successful obtainment of biological and/or nuclear weapons like Russia now warned had been pursued with full US support up until the start of the conflict.

Should the U.S. have succeeded in eroding Russia’s nuclear second-strike potential through the means that were earlier identified in parallel with NATO continuing to clandestinely expand its military infrastructure in Ukraine, Kiev could have threatened Moscow with weapons of mass destruction (WMDs) at its Western patrons’ behest. If Russia didn’t submit, a conventional invasion of the country could have been attempted and/or it could have been threatened with a WMD attack from Ukraine. Obviously, the situation that Russia was placed wasn’t ideal, hence  it chose to act.

Returning to the lead-in question of this analysis, namely why the U.S. prioritized containing Russia instead of China, it seems as though America’s grand strategic calculus was that it would be much easier to do the first at this moment in time than the second, since the relevant leverage had already been established in Europe—unlike in Asia, where the U.S. hasn’t been advancing this aim for the past three decades but only the past few years. Furthermore, the U.S. might have considered Russia to be weaker than China and thus more susceptible to pressure, not militarily, but economically and technologically.

If that was the case like the author argues, containing Russia might have been thought to be a prerequisite towards ultimately containing China. To explain, the U.S. successful containment of the first and perhaps even its ultimate “Balkanization” upon placing it in a perpetual position of (likely WMD) blackmail would greatly impact on the national security of the People’s Republic, which is largely dependent on a stable and friendly Russia along its northern borders. Destabilizing, weakening, and possibly even breaking up Russia in the long term would instantly jeopardize China’s national security.

Additionally, containing Russia entails less immediate economic, financial, supply chain, and technological blowback for the West than doing the same against China due to the complex economic interdependence that characterizes Western-Chinese relations. Russia was never really all that integrated into the global economy, apart from serving as Europe’s chief energy supplier so the U.S. might have wagered that it would be less costly to pressure its junior partners to “decouple” from it. Moreover, the economic consequences that this might trigger for Europe could be exploited by the U.S.

With unexpected commitments to their people related to subsidizing skyrocketing energy costs and providing other forms of support in the midst of an intensified economic crisis caused by “decoupling” from their mutually beneficial energy relations with Russia, the U.S. could swiftly move to entrench its military-strategic influence over those countries since they couldn’t afford to pay out of pocket to “contain” Russia in response to the artificially manufactured “Russian threat”. Its companies could also buy out some of their competitors on the cheap in certain scenarios as well as sell more LNG too.

To wrap it all up, the U.S. prioritized containing Russia over China because: this scenario was already proceeding apace for the last three decades; the military-strategic infrastructure was largely in place; the costs of “decoupling” from Russia are much less than “decoupling” from China; the U.S. needed to galvanize transatlantic solidarity through NATO under an anti-Russian pretext; and comprehensively weakening Russia is regarded as the perquisite to successfully containing China sometime in the future. From these observations, the author hopes to inspire further research into the US’ grand strategic goals.

Andrew Korybko is American Moscow-based political analyst specializing in the relationship between the US strategy in Afro-Eurasia, China's One Belt One Road global vision of New Silk Road connectivity, and Hybrid Warfare..

Washington’s Plan to Break Up Russia