Home Uncategorized Comeback kid Lula in the eye of a volcano Luis Ignacio “Lula” da Silva may be the ultimate 21st century political comeback kid. At 77, fit and sharp, leading an alliance of 10 political parties, he has just been elected as Brazilian president for what will be a de facto third term after his first two from 2003 to 2010.

Lula even staged a comeback-inside-a-comeback, during the extremely fast and tight electronic vote counting, reaching 50.9% against 49.1% to the incumbent, extreme right President Jair Bolsonaro, representing a difference of only two million votes in a country of 215 million people. Lula’s back in office on January 1, 2023.

Lula’s first speech was somewhat anti-Lula; noted for his Garcia Marquez-style improvisations and folksy stream of consciousness, he read from a measured, carefully-prepared script.

Lula emphasized the defense of democracy; the fight against hunger; the drive for sustainable development with social inclusion; a “relentless fight against racism, prejudice and discrimination.”

He invited international cooperation to preserve the Amazon rainforest and will fight for fair global trade, instead of trade “that condemns our country to be an eternal exporter of raw materials.”

Lula, always an exceptional negotiator, managed to win against the formidable state machine apparatus unleashed by Bolsonaro, which saw the distribution of billions of dollars in vote-buying; an avalanche of fake news; outright intimidation and attempts of voter suppression against the poor by rabid Bolsonarists; and countless episodes of political violence.

Lula inherits a devastated nation that, much like the US, is completely polarized. From 2003 to 2010 – he rose to power, incidentally, only two months before America’s “shock and awe” against Iraq – it was quite a different story.

Lula managed to bring to the table economic prosperity, massive poverty alleviation and an array of social policies. In eight years, he created at least 15 million jobs.

Vicious political persecution ended up canceling him out of the 2018 presidential elections, paving the way for Bolsonaro – a project entertained by the hard-right Brazilian military since 2014. 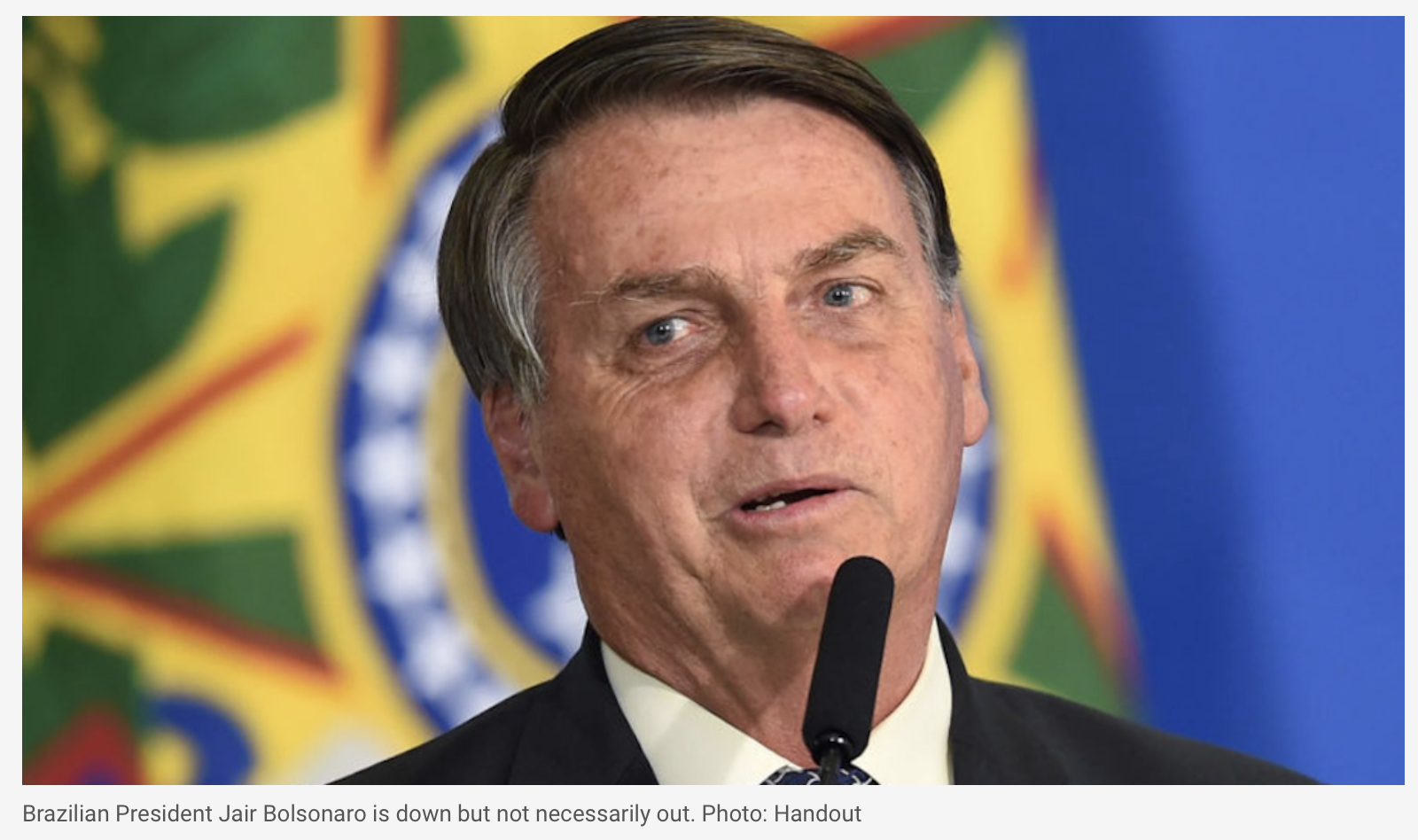 Collusion between Brazil’s Public Ministry and dodgy “justice” stalwarts to persecute and condemn Lula on spurious charges forced him to spend 580 days in jail as a political prisoner as notorious as Julian Assange.

Lula ended up being declared not guilty in no less than 26 motions against him by a lawfare machine at the heart of the – deeply corrupt – Car Wash operation.

Lula’s Sisyphean task starts now. At least 33 million Brazilians are mired in hunger. Another 115 million are fighting “food insecurity.” No less than 79% of families are hostages to high levels of personal debt.

In contrast to the new “pink tide” rolling across Latin America – of which he is now the superstar – internally there’s no pink tide.

On the contrary, he will face a deeply hostile Congress and Senate and even Bolsonarist governors, including in the most powerful state of the federation, Sao Paulo, which concentrates more industrial firepower than many latitudes in the Global North.

Round up the usual suspects

The absolutely key vector is that the international financial system and the “Washington Consensus”, already controlling Bolsonaro’s agenda, have captured Lula’s administration even before it begins.

Lula’s vice-president is center-right Geraldo Alckmin, who can be catapulted to power the minute that deeply hostile Congress decides to fabricate some Lula impeachment scheme.

It’s not an accident that the neo-liberal The Economist magazine has already “warned” Lula to shift to the center: that is, his government must be run, in practice, by the usual financial suspects.

Much will depend on who Lula appoints as his finance minister. The top candidate is Henrique Meirelles, former CEO of FleetBoston, Brazil’s second largest external creditor after CitiGroup. Meirelles has expressed unrestricted support for Lula, for whom he previously worked as central bank chief.

Meirelles is likely to prescribe the exact same economic policies as Bolsonaro’s top economic enforcer, investment banker Paulo Guedes. That happens to be exactly what Meirelles himself created during the rapacious Temer administration, which came to power after the institutional coup against President Dilma Rousseff in 2016. Henrique Meirelles is expected to steer Lula’s economic policy and could be next in line as national leader. Image: Twitter

And now we get to the real juice. None other than US Under Secretary of State for Political Affairs Victoria Nuland visited Brazil “unofficially” last April. She refused to meet Bolsonaro and praised the Brazilian electoral system (“You have one of the best in the hemisphere, in terms of reliability, in terms of transparency.” )

Afterward, Lula promised the EU a sort of “governance” of the Amazon and had to publicly condemn the Russian “special military operation” in Ukraine. All that after he had already praised Biden, in 2021, as “a breath for democracy in the world.” The “reward” for the accumulated performance was a Time magazine cover.

All of the above may suggest an incoming, shady pseudo-Left government by the Workers Party – neoliberalism with a human face – infiltrated by all sorts of right-wing vectors, essentially serving the interests of Wall Street and the Democrat-controlled State Department.

Key planks: acquisition of key economic assets by the usual globalist suspects, and thus no room for Brazil to exercise real sovereignty.

Lula, of course, is too smart to be reduced to the role of mere hostage but his room for maneuver – internally ­– is extremely slim. Toxic Bolsonarism, now in the opposition, will continue to institutionally prosper dressed up as – fake – “anti-system”, especially in the Senate.

Bolsonaro is a self-described “myth” created and packaged by the military, coming out in the open about a month after Dilma’s election victory that propelled her to a second term in late 2014.

Bolsonarism is even more insidious because this is a military-concocted movement subservient to hardcore neoliberal globalist elites and comprised of evangelicals and agribusiness tycoons while posing as “anti-globalist.” No wonder the virus contaminated literally half of a dazed and confused nation.

He has promised to serve only one term, or up to the end of 2026. But that’s exactly the key stretch in the eye of the volcano, straddling the decade Putin described in his Valdai speech as the most dangerous and important since World War II.

The drive towards a multipolar world, institutionally represented by a congregation of bodies from BRICS+ to the Shanghai Cooperation Organization to the Eurasia Economic Union, will profit immensely to have Lula on board as arguably the natural leader of the Global South – with a track record to match.

Of course, his immediate foreign policy focus will be South America: he already announced that will be the destination of his first presidential visit, most probably Argentina, which is bound to join BRICS+.

Then he will visit Washington. He has to. Keep your friends close and your enemies closer. Informed opinion across the Global South is very much aware that it’s under Obama-Biden that the whole, complex operation to topple Dilma and expel Lula from politics was orchestrated.

Brazil will be a lame duck at the upcoming G20 in Bali in mid-November but in 2023 Lula will be back in business side-by-side with Putin and Xi. And that also applies to the next BRICS summit in South Africa, which will consolidate BRICS+, as an array of nations are itching to join, from Argentina and Saudi Arabia to Iran and Turkey.

And then there’s the Brazil-China nexus. Brasilia has been Beijing’s key trade partner in Latin America since 2009, absorbing roughly half of China’s investment in the region (and the most of any Latin American investment destination in 2021) and firmly placed as the fifth largest exporter of crude for the Chinese market, second for iron and first for soybeans. The precedents tell the story. Right from the start, in 2003, Lula bet on a strategic partnership with China. He considered his first trip to Beijing in 2004 as his top foreign policy priority. The goodwill in Beijing is unshakeable: Lula is considered an old friend by China – and that political capital will open virtually every red door.

In practice, that will mean Lula investing his considerable global clout in strengthening BRICS+ (he already stated BRICS will be at the center of his foreign policy) and the inner workings of South-South geopolitical and geo-economic cooperation.

That may even include Lula formally signing up Brazil as a partner of the Belt and Road Initiative (BRI) in a way that won’t antagonize the US. Lula, after all, is a master of this craft.

Finding a path in the eye of the volcano, internally and externally, will be the definitive political challenge for the comeback kid. Lula has been written off countless times, so underestimating him is a bad bet. Even before starting his third term, he has already performed a major feat: to emancipate a majority of Brazilians from mental slavery.

All eyes will be on what the Brazilian military – and its foreign handlers – really want. They have embarked on a very long-term project, control most levers in the power structure, and simply won’t give up. And so the odds may be stacked against an aging neo-Ulysses from northeast Brazil reaching his Ithaca ideal of a fair and sovereign land.

Pepe Escobar is a columnist at The Cradle, editor-at-large at Asia Times and an independent geopolitical analyst focused on Eurasia. Since the mid-1980s he has lived and worked as a foreign correspondent in London, Paris, Milan, Los Angeles, Singapore and Bangkok. He is the author of countless books; his latest one is Raging Twenties.

The New York Times Still Uses the Same Methods to Deceive Its Readers.