Home US EXCEPTIONALISM The New York Times Still Uses the Same Methods to Deceive Its Readers.

The New York Times Still Uses the Same Methods to Deceive Its Readers.

November 4, 2022 11 minutes read
Please make sure these dispatches reach as many readers as possible. Share with kin, friends and workmates and ask them to do likewise.

However, it didn’t even start with Bush. Here is a great news report from Andrew Cockburn that was published in the short-lived UK news-site “The First Post” on 23 April 2007, last web-copied (or “Saved”) on 12 August 2011, and then taken down, after having been successfully “Saved” only 5 times during those 4.3 years — so, seen by almost nobody, and forgotten since then. It’s titled “Iraq’s WMD myth: why Clinton is culpable”, and maybe tell me in your comments below whether (and, if so, how) you had ever known about this obscure but historically enormously important news-report that was published 15 years ago and then removed from the Web: 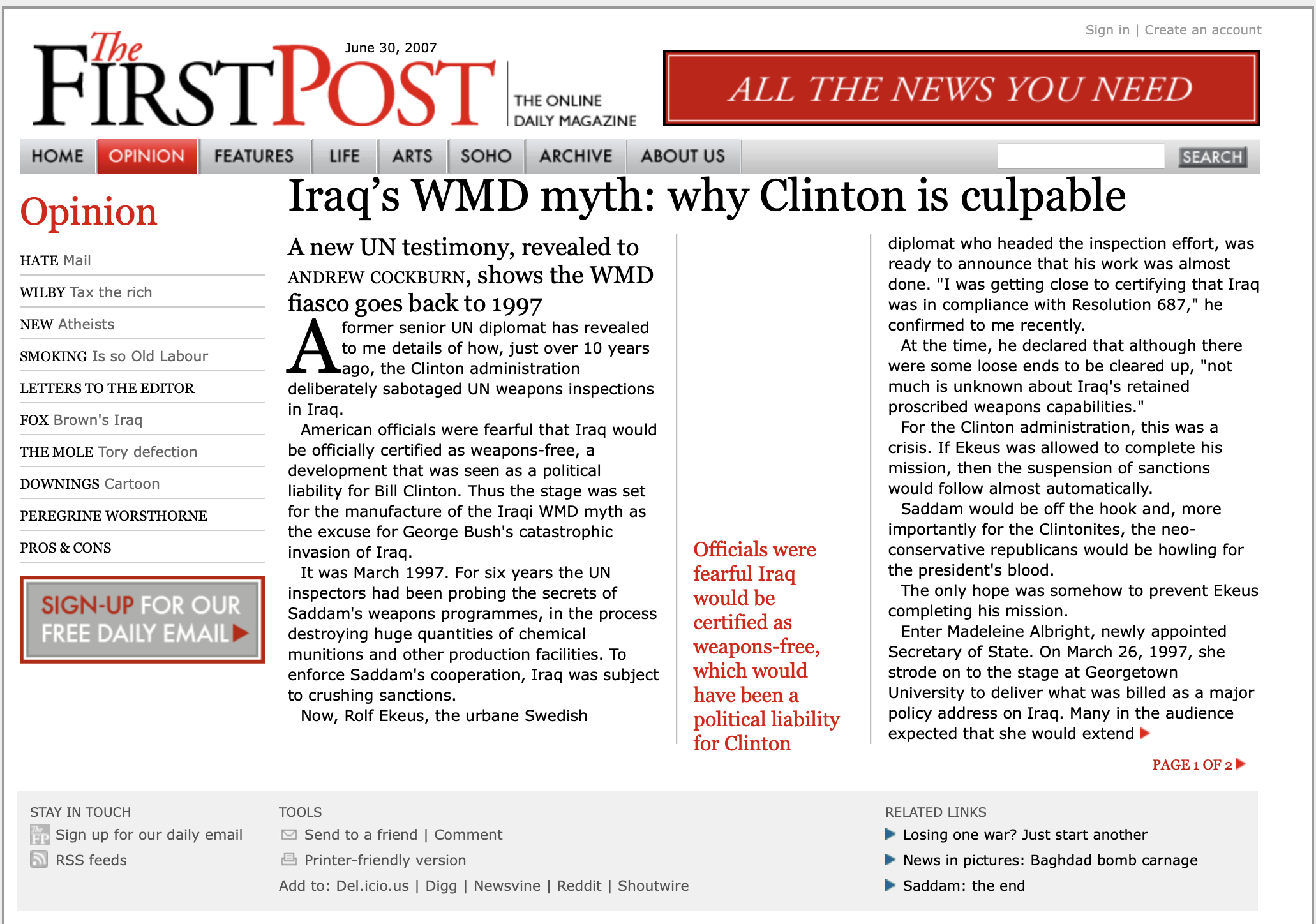 A new UN testimony, revealed to Andrew Cockburn, shows the WMD fiasco goes back to 1997

A former senior UN diplomat has revealed to me details of how, just over 10 years ago, the Clinton administration deliberately sabotaged UN weapons inspections in Iraq.

American officials were fearful that Iraq would be officially certified as weapons-free, a development that was seen as a political liability for Bill Clinton. Thus the stage was set for the manufacture of the Iraqi WMD myth as the excuse for George Bush’s catastrophic invasion of Iraq.

It was March 1997. For six years the UN inspectors had been probing the secrets of Saddam’s weapons programmes, in the process destroying huge quantities of chemical munitions and other production facilities. To enforce Saddam’s cooperation, Iraq was subject to crushing sanctions.

Now, Rolf Ekeus, the urbane Swedish diplomat who headed the inspection effort, was ready to announce that his work was almost done. “I was getting close to certifying that Iraq was in compliance with Resolution 687,” he confirmed to me recently.

At the time, he declared that although there were some loose ends to be cleared up, “not much is unknown about Iraq’s retained proscribed weapons capabilities.”

For the Clinton administration, this was a crisis. If Ekeus was allowed to complete his mission, then the suspension of sanctions would follow almost automatically.

Saddam would be off the hook and, more importantly for the Clintonites, the neo-conservative republicans would be howling for the president’s blood.

The only hope was somehow to prevent Ekeus completing his mission.

Enter Madeleine Albright, newly appointed Secretary of State. On March 26, 1997, she strode on to the stage at Georgetown University to deliver what was billed as a major policy address on Iraq. Many in the audience expected that she would extend some sort of olive branch toward the Iraqi regime, but that was far from her mind.

Instead, she was set on making sure that Saddam effectively ended his cooperation with the inspectors. “We do not agree with the nations who argue that if Iraq complies with its obligations concerning weapons of mass destruction, sanctions should be lifted,” she declared. Sanctions, she stated without equivocation, would remain unless or until Saddam was driven from power.

Ekeus understood immediately what Albright intended. “I knew that Saddam would now feel that there was no point in his cooperating with us, and that was the intent of her speech.”

Sure enough, the following day he got an angry call from Tariq Aziz, Saddam’s deputy prime minister and emissary to the outside world. “He wanted to know why Iraq should work with us any more.”

From then on, the inspectors found their lives increasingly difficult, as Iraqi officials, clearly acting under instructions from Saddam, blocked them at every turn.

Ekeus resigned in July 1997, to be replaced by the Australian Richard Butler. Butler was soon embroiled in acrimonious confrontation with the Iraqis. Later the following year, all the inspectors were withdrawn from Iraq and the US mounted a series of bombing raids.

Clinton’s strategy had been successful. Iraq remained under sanctions, while in Washington the neo-conservative faction spun the wildest conjectures as to what evil schemes Saddam, unmolested by inspectors, might be concocting with his weapons scientists.

In fact, as we know now, Saddam had long abandoned all his WMD programmes, but as the CIA had no sources of intelligence inside Iraq, no one in the West could prove this.

Finally, following 9/11, the war party in George Bush Jr’s administration was able to make the case for invasion on the grounds that Saddam had refused to comply with UN resolutions on disarmament by refusing to grant access to the weapons inspectors.

The Iraq disaster has many fathers.

The difference between George W. Bush and Bill Clinton, in other words, wasn’t strategic, but merely tactical — it was about timing, not about the goal, which was to conquer Iraq and to add it to the U.S. empire. Did you ever read about that in the NYT, Washington Post, MSNBC, CNN, NBC, CBS, ABC, Politico, Insider, think-magazines, or other ‘news’-media? What about in the BBC, or Deutsche Welle? Or liberal media, such as the Guardian, and The Nation? Or conservative media, such as the Telegraph and Wall Street Journal? That’s the ‘diversity’ within the Deep State. Differences between political Parties are like the differences between vanilla versus chocolate icing on the poisoned cake. The reason that things keep getting worse is that the Deep State — America’s billionaires — remain in control over all of it, all the time. That’s the “MIC” — the Military Industrial Complex. The press is part of it.

Here is how that plays out right now:

All of the ‘news’-media say that the invasion of Ukraine started on 24 February 2022, not before that, on 7 January 2022, when U.S.-NATO said no to Russia’s demand that had been made on 17 December 2021 for them finally to honor the multiple promises that had been made to Gorbachev never to expand NATO — and ESPECIALLY not to add to it to include Ukraine, which is only 300 miles away (five minutes of missile-flying-time) from The Kremlin. And that the war in Ukraine had not actually started in February 2014 when Obama’s coup grabbed control over neutralist Ukraine and installed a rabidly anti-Russian government there. How much of historical truth can you glean from the ‘news’?

So, on 2 November 2022, the NYT headlined “Russian Military Leaders Discussed Use of Nuclear Weapons, U.S. Officials Say” and pretended that what had started all this build-up toward WW III wasn’t Russia’s existential fear of America posting its nukes within five minutes of Moscow (after Obama in 2014 had grabbed control over Ukraine on Russia’s border), but instead Russia’s ‘imperialism’ (instead of America’s imperialism that seeks to control not merely its neighbors but the entire planet) in which Russia is desperately trying to expand to include Ukraine. Providing no identifiable sources, their ‘news’-report or screed from the U.S. regime opens: “Senior Russian military leaders recently had conversations to discuss when and how Moscow might use a tactical nuclear weapon in Ukraine.” If it were true, then it would violate Russia’s very longstanding and never-changed stated conditions for introducing the use of nuclear weapons — ‘tactical’ or otherwise — into any type of battle. The NYT’s screed (‘news’-report) ignores that crucial fact (they don’t want the American public to understand ‘the enemy’ — only to fear ‘the enemy’), but just stenographically reports what the unnamed U.S. Government alleged sources had allegedly told them — which is as reliable as what, for example, George W. Bush had told the newspaper back on 7 September 2002. To seal the deal that will steal the reader’s mind and enslave the reader to the MIC’s lies, the tag at the article’s end is this, which it links to two other fake ‘historical’ articles in the NYT, both of which articles ignore the broader picture (which their propaganda for WW III must always hide, instead of assert), and which lie to allege that the 2014 overthrow of Yanukovych was the revolution that started democracy in Ukraine, instead of being the U.S. coup that ended it and started the war there:

History: Here’s what to know about Russia and Ukraine’s relationship and the causes behind the conflict.

This time, the U.S. regime isn’t demanding regime-change in Baghdad; they’re demanding it now in Moscow. And, because of lying ‘news’-media such as the NYT, the American public (yet again, as in 2002) are supporting it. But the results, this time, if the Deep State (as it always has done ever since 1945) gets its way, will destroy not only the people in some distant land that America’s rulers have decided is ‘our’ ‘enemy’, but all of us — and everyone, everywhere.

Has a more evil regime ever existed? Hitler’s, perhaps. (Of course, America took in and assisted abroad a lot of Hitler’s leading operatives — but it was Truman who did that, NOT Franklin Delano Roosevelt, who would have intensely opposed it.)

You can always rely on the New York Times—to lie to justify yet another illegal war. And of course, the rest of the media, CNN, MSNBC and all the rest of them cite the NYT as a credible source. That’s why the US public is so confused and not just misinformed, but poisonously malinformed. And it’s been going on for years, even decades. So the question needs to be asked,  “Why after all this time, does the public, even though it knows it was lied to about Saddam, or the Gulf of Tonkin, or Nicaragua threatening to invade Texas, to… Read more »

Put it down to the base rate fallacy whereby 95%+ of people believe things told/written, proof unseen. The NYT along with the other garbage is tailor made to fit the “individual”
nitwit – the old “wink wink, nudge nudge, just between US alone” tactic. But please requote us in the family/group disputes..