Home ABOMINATIONS Let’s Be Clear: If WW3 Happens It Will Be The Result Of Choices Made By The US Empire

Published: November 7, 2022Last Updated on November 8, 2022 8 minutes read
Be sure to distribute this article as widely as possible. Pushing back against the Big Lie is really up to you. 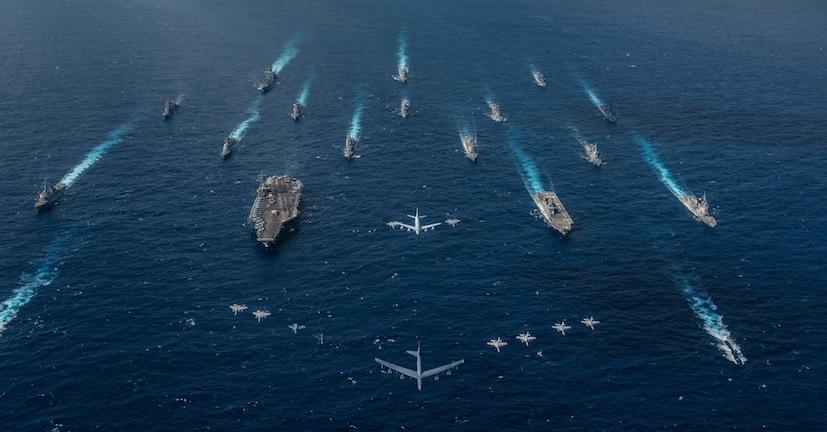 Going Rogue With Caitlin Johnstone · Let's Be Clear: If WW3 Happens It Will Be The Result Of Choices Made By The US Empire

The commander of the US nuclear arsenal has stated unequivocally that the war in Ukraine is just a warmup exercise for a much larger conflict that’s already in the mail.

The commander that oversees US nuclear forces delivered an ominous warning at a naval conference last week by calling the war in Ukraine a “warmup” for the “big one” that is to come.

“This Ukraine crisis that we’re in right now, this is just the warmup,” said Navy Adm. Charles Richard, the commander of US Strategic command. “The big one is coming. And it isn’t going to be very long before we’re going to get tested in ways that we haven’t been tested [in] a long time.”

Richard’s warning came after the US released its new Nuclear Posture Review (NPR), which reaffirms that the US doctrine allows for the first use of nuclear weapons. The review says that the purpose of the US nuclear arsenal is to “deter strategic attacks, assure allies and partners, and achieve US objectives if deterrence fails.”

Not only does Richard appear to believe that a hot war between major world powers is a foregone conclusion, he has also previously stated that a nuclear war with Russia or China is now “a very real possibility.”

The US empire really is threatening all life on Earth with potential nuclear apocalypse:

The US military commander who oversees nuclear forces said, “This Ukraine crisis that we’re in right now, this is just the warmup”

“The big one is coming,” he added https://t.co/6c1iLEDOEk

Again, this is not some armchair warrior opining from his desk at a corporate newspaper or DC think tank, this is the head of STRATCOM. Richard would be personally overseeing the very warfare he is talking about.

What I find most striking about remarks like these is how passive they always make it sound. Richard talks about “The Big One” like other people talk about California earthquakes, as though a hot war with China would be some kind of natural disaster that just happened out of nowhere.

This type of rhetoric is becoming more and more common. Describing an Atomic Age world war as something that would happen to the US empire, rather than the direct result of concrete A-or-B decisions made by the empire, is becoming its own genre of foreign policy punditry.

This passive, oopsy-poopsy narrative overlay that’s placed atop the US empire’s militarism is nothing new. Back in 2017 Fair.org’s Adam Johnson documented the way western media are always describing the United States as “stumbling” into wars and getting “sucked in” to military interventions, like a cheating spouse making up bad excuses after getting caught:

This framing serves to flatter two sensibilities: one right and one vaguely left. It satisfies the right-wing nationalist idea that America only goes to war because it’s compelled to by forces outside of its own control; the reluctant warrior, the gentle giant who will only attack when provoked to do so. But it also plays to a nominally liberal, hipster notion that the US military is actually incompetent and boobish, and is generally bad at war-making.

This is expressed most clearly in the idea that the US is “drawn into” war despite its otherwise unwarlike intentions. “Will US Be Drawn Further Into Syrian Civil War?” asked Fox News (4/7/17). “How America Could Stumble Into War With Iran,” disclosed The Atlantic (2/9/17), “What It Would Take to Pull the US Into a War in Asia,” speculated Quartz (4/29/17). “Trump could easily get us sucked into Afghanistan again,” Slate predicted (5/11/17). The US is “stumbling into a wider war” in Syria, the New York Times editorial board (5/2/15) warned. “A Flexing Contest in Syria May Trap the US in an Endless Conflict,” Vice News (6/19/17) added.

Syria the Latest Case of US ‘Stumbling’ Into War - https://t.co/uZV7Lu3VFf pic.twitter.com/FVPtSGeery

So let’s get real clear about this here and now: if there is a hot war between the US and a major power, it will not be because that war was “stumbled into”. It will not be like an earthquake or other natural disaster. It will not be something that happens to or is inflicted upon the US empire while it just passively stands there in Bambi-eyed innocence.

Another thing that strikes me about comments like those made by Charles Richard is how freakish and insane it is that everyone doesn’t respond to them with, “Okay, well, then let’s change all of the things we are doing, because that’s the worst thing that can possibly happen.”

And make no mistake: that absolutely is an option. The option to turn away from the collision course with potentially the most horrific war of all time is available right now, and it will remain available for some time into the future. This isn’t 1939 when war is already upon us; if anything it’s more like the early 20th century precursors to World War I and all the stupid aggressions and entanglements which ultimately gave rise to both world wars.

One of the many ways our cultural fascination with World War II has made us stupid and crazy is that it has caused us to forget that it was the worst single event in human history. Even if a hot war with Russia and/or China didn’t go nuclear, it would still unleash unspeakable horrors upon this Earth which would reverberate throughout our collective consciousness for generations.

That horror should be turned away from. And the time to start turning is now.

Could not agree with Ajamu more. Well said. 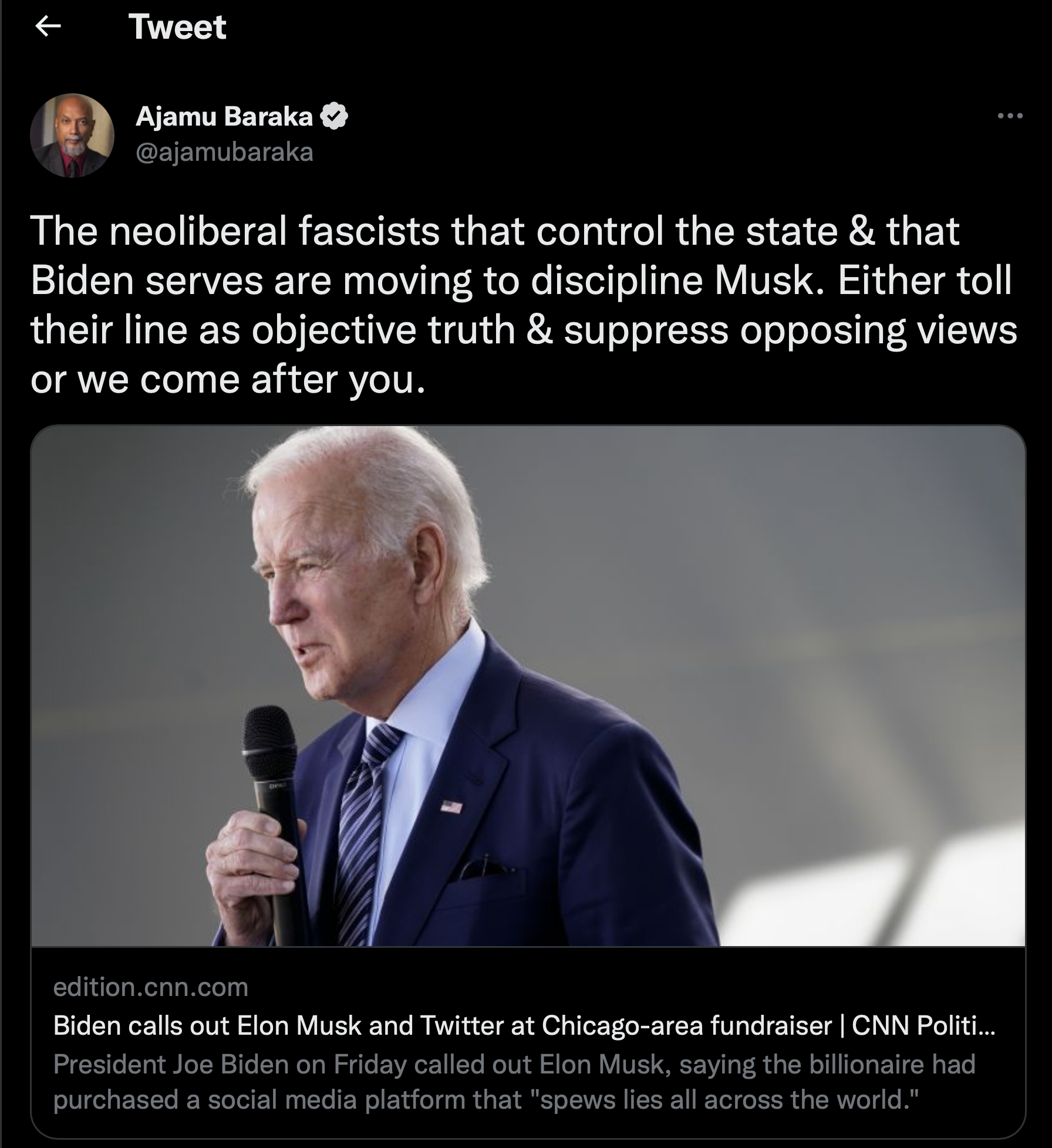 I seriously doubt that it will go that far this time around. Of course, the war that started between Russia (and now China) and the West in 1917 will continue. A small byline on television stated that Biden had sent a hidden envoy to try to find ground for a peace agreement. The Ukraine war has not produced a victory and is costing too much and like the Vietnam war will be squelched and written off Moreover the ‘green’ laws adopted by an incompetent Biden regime and for which they had made no scientific preparations are biting too deep into… Read more »