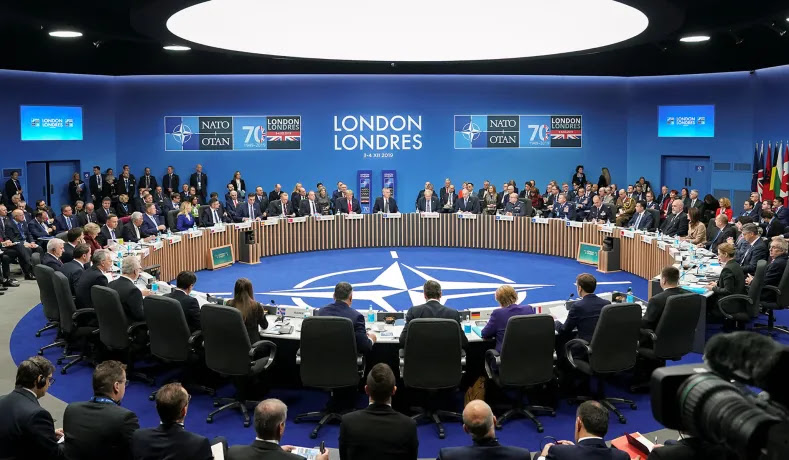 Something quite amazing has just happened.  Following the terrorist attack in Ankara in which 34 people died and injured another 125, Turkish authorities first declared that they will not accept US condolences.  Then the Turks launched a military operation against “Kurdish terrorists in northern Syria“.  Turkey then claimed to have neutralized 184 terrorists.

What is not mentioned in those articles is that the target of the Turkish strike was the US-run center for the training and education of PKK militants in Rojava.  There are rumors that the Turks gave the US enough warning time to evacuate most of its personnel.

Does that sound familiar?

If it does, it is because it is very similar to what the Iranians did when they hit US bases in Iraq following the murder of General Soleimani in a US drone strike.

If the above is true, and rumors are very much “if” and cannot be considered as proven fact, then that means that a NATO member state (Turkey) just attacked a US base and, like Iran, got away with it: the “The Finest Fighting Force in the History of the World” just got whacked hard and humiliated for a second time and could do absolutely nothing to defend itself or even save face.

How big a slap in the face did Uncle Shmuel get this time?  According to the Turkish defense minister, Hulusi Akar,

Terrorists’ shelters, bunkers, caves, tunnels, and warehouses were successfully destroyed,” Akar said, adding that “the so-called headquarters of the terrorist organization were also hit and destroyed.” Overall, the Defense Ministry claimed that the strikes hit nearly 90 targets, which it said were connected to the Kurdistan Workers’ Party (PKK) and the Kurdish People’s Defense Units (YPG).

Even allowing for some “patriotic exaggeration”, it is pretty clear that Ergodan’s revenge strike was both quite substantial and, apparently, rather effective.

So, what do we have here?  A NATO member state all but accused the US of a major terrorist attack against its capital city, and then that a NATO member state openly attacked a US-run facility (let’s not call it a base, that would be inaccurate).

Is Erdogan’s claim even credible?  Absolutely!  Not only has the US already attempted to overthrow and kill Erdogan, who was saved in extremis by Russian special forces (same with Ianukovich), but we also know that the US overthrew General de Gaulle in 1968-1969 and that NATO covert forces were used to stage false flag attacks against NATO allies (especially Italy) in the so-called GLADIO operation.

NATO is not a defensive alliance – it never was –  but it is a tool of US colonial domination.

This was always true, hence the famous words spoken  in the now faraway 1950s when the first NATO Secretary General, British General Hasting Ismay, bluntly admitted that real the purpose of NATO was to keep the “Russians out, Americans in, Germans down“.  Let’s take these elements one by one, starting with the last one:

Need proof?  How about the undeniable act of war against Germany (and, I would argue, the entire EU) when the Anglos blew up NS1/NS2?  Is that not proof enough?

Against that background, we have to ask yourselves: what does it even mean to be a NATO member state in 2022?

The truth is that NATO was a pure creation of the Cold War and that in the real world of 2022 it is a total anachronism.  Being a NATO member state really means very little.  Not only are some “more equal than others” in NATO, but there are also non-NATO states which are far more “NATOized” than actual NATO members states (I think of Israel or, of course, the Nazi occupied Ukraine).  And being a member of NATO does not protect you from anything, not from external attacks and not against internal ones either.

According to Col (Ret) MacGregor, the war in the Ukraine might well bring about the collapse of both NATO and the EU.  I very much agree with him.  I would say that such a collapse will not so much be the result of embarrassing defeats as it will be due to the deep internal contradictions inside both organizations.

By the way, this is not our topic today, but I think that the CSTO has much of the same problems and contradictions as NATO.  So is what we observe a “NATO problem” or a problem of artificial and generally obsolete alliances?  I would argue for the latter.

But let’s leave a discussion of the CSTO for another day.

In the case of Turkey this problem is made even worse by a total incompatibility between Islam and the Woke ideology now openly promoted (and enforced) by the US and NATO.

Then there is geography.  Turkey has some pretty powerful regional neighbors, including not only Greece or Israel, but also Iran, Saudi Arabia, Egypt, Azerbaijan, Iraq, Syria and, course, Russia.  Can Turkey count on any type of US/NATO “protection” from such powerful neighbors?

Ask the Saudis how much the US/NATO helped them against the Houthis!

Ask the Israelis how much the US/NATO helped them against Hezbollah?

If anything, the Iranian strikes on CENTCOM bases have demonstrated that the US does not have the stomach to take on Iran.  In sharp contrast, the Russian and Iranian intervention in Syria defeated the US plans for a “New Middle East” or, shall we say, it did bring about a “new Middle-East”, but most definitely not the one the US Neocons were hoping for!

Add to this is major deterioration in the relationship between the US and MBS’ Saudi Arabia and we get an amazing picture: the USA and NATO (which the US dragged into the region) are gradually becoming irrelevant in the Middle-East.  Instead, new “big actors” are gradually filling the void, including Russia and Iran who are now even gradually allowing Saudi Arabia to participate in a much needed regional dialog about the future of the region.

How absolutely pathetic is that for a wannabe superpower?

Will this process have an impact on the NATO war against Russia?

Well, let’s imagine that Russia would really strike some target inside Poland (which is what the Ukies claimed, as did the Poles until Uncle Shmuel told them to cool it).  What would happen next?

Does anybody still remember what happened when Erdogan flew to Mons to beg for NATO protection against Russia (following the downing of a Russian Su-24 over northern Syria by a joint US-Turkish operation, possibly executed without Erdogan’s knowledge, at least that was his claim).  What did NATO promise or give the Turks?  Absolutely *nothing* (other than “consultations”).

Now the Poles might be delusional enough to think that a US President might order a retaliatory attack on Russia if Russia strikes Poland, but those of us who know the USA and its ruling elites know that this is nonsense.  Why?  Simply because a US/NATO counter-strike on Russian forces would result in an immediate Russian response.

The truth is very stark in its simplicity:

So here is the deal: whether western politicians understand that or not, military professionals all know the truth – NATO can’t defend ANY of its members against a truly modern military.   Why?

Let’s look at what capabilities the US/NATO truly have:

So what does NATO lack to be a credible military force?

Obviously, “boots on the ground”.   And I don’t mean a few subunits from the 101st or 82AB or US special forces or even a so-called “armored brigade” which, in reality, lacks adequate TO&E to qualify as such.  I am talking about a “land warfare” force capable of fighting a modern and extremely determined enemy.

[Sidebar: if this is a topic of interest to you, may I recommend my article “Debunking popular clichés about modern warfare” written in 2016 but which is still mostly relevant]

The USA, Israel and the KSA all fell into the same trap: the delusion that by spending billions and billions of dollars on massively over-priced and massively under-performing military hardware will allow you to defeat an enemy assumed to be “less sophisticated”.  Hence the need to use:

All of the above are a normal part of any modern war, but in the case of the US/NATO they are not just part of a bigger plan, they are central to any US/NATO operation, thereby dramatically decreasing the true capabilities of the US/NATO.  In sharp contrast, countries like Russia or Iran can deploy “boots on the ground”, and very capable ones at that (remember that the Iranians are those who trained Hezbollah!).

What does all this mean practically?

It means that even if the Russians decided to strike at a NATO country, the tensions would go through the roof, but it is highly UN-likely that any US President would allow any action which could result in a full-scale nuclear war!  Remember, for Russia, this is an existential war, no less than WWII, whereas no Anglo leader would ever dare launch a suicidal attack on Russian forces which would most likely result in the full obliteration of the US/UK and any other country participating (for example by hosting forward deployed standoff weapons) in such an attack.

Does that mean that we have to anticipate a Russian strike on Poland, Romania or the UK?

No, not at all.  In fact, it would be very dangerous for the Russians to only leave a stark choice to the Hegemony: admit defeat or commit suicide.  And since the Russians do have escalation dominance (that is to say that they have balanced capabilities from the small-arms fire level to a full intercontinental nuclear war, and with all the stages in between these two extremes) they, unlike the US/NATO. are not stuck between the choice of surrender or suicide.

That being said, it would also be misguided to assume that Russia “would never dare strike a NATO member state”.  The Poles might be willing to wager their future and even existence on such a invalid inference, but not the folks at the Pentagon or elsewhere in the decision centers of the Hegemony.

Douglas MacGregor is right, the NATO war against Russia might very well result in the collapse of both NATO and the EU which, in turn, will place an official “last nail”, into the coffin of an already long-deceased Hegemony which currently still exists only because of its momentum and its propaganda machine.

I would argue that NATO is already falling apart before our eyes, a process which the economic, social, political, economic and spiritual crises which are plaguing the entire EU will only accelerate.  And, of course, the most amazing thing about this is that this collapse is not the result of some Machiavellian plan cooked up by the Russians, the Chinese or the Iranian, but a direct consequence of decades of truly suicidal policies: they did it to themselves!

Now, the Russians, the Chinese and the Iranians are mostly waiting, watching (probably smiling) and planning for the Hegemony-free multi-polar world they want to bring about, with or without the participation of the USA and Europe.

ABOUT THE AUTHOR / SOURCE
Andrei Raevski is The Saker's founding editor and leading geopolitical analyst.