Awaiting Liberation: A Report from the Front and a Warning

By Batiushka
Crossposted with the Saker blog 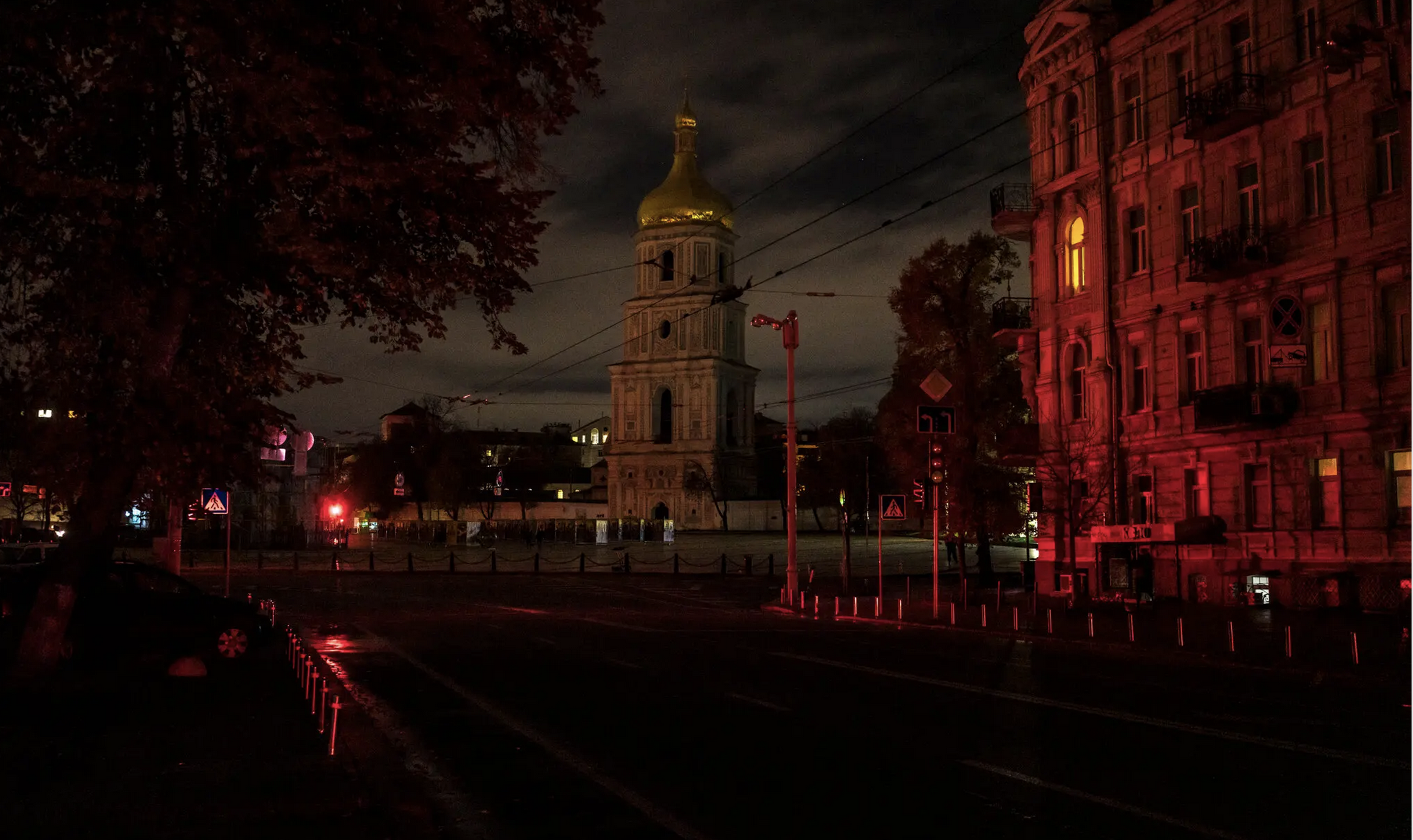 "A capital draped in darkness" was the caption used by the NYTimes for this image of Kiev finally suffering some of the pain it has inflicted for almost a decade and so liberally on Ukrainians who disagreed with the government's fascist policies, and those it dragged to war as a result of its appalling corruption. Add to that  living in a freezing city  in which normal tasks like cooking or going to the bathroom will become impossible. Not to mention that hundreds of thousands live in hi-rise buildings, where the elevators no longer work.

If you are expecting dramatic news and pictures from the Donbas, where Allied troops are slowly but inexorably advancing, destroying thousands of Nazis of all Western nationalities and dozens of their military vehicles and piles of their equipment every week, as they liberate towns and villages (all unreported by the Western media), sorry. This is a story from the home front. It is a human story. I hope it brings it all home to you.

It is about a small town south of Kiev. Two years ago, Ukrainian (though they are Russians, as far as they are concerned) members of my family, a couple with two grown-up children, bought a brand-new house there. I have been there and stayed there. Last year. I know it well and the road from there to central Kiev. I could take you there now.

First of all, it is snowing. Photos sent to me show it. The long Indian summer is well and truly over. And the Russians have decided to use the same tactics as the Americans used in Serbia: launch missiles at the energy infrastructure. Thank you, USA, for your example of how to wage war.

The Ukrainian currency, the hryvnia, has dropped by 30% against the dollar, pound and euro. Everything that is imported has increased in price by at least that much. Many things by 100%. Though that is similar to the situation in Western Europe, where I now live. On top of that what you used to get from Russia is now unobtainable because of ‘sanctions’.

Only, in the Ukraine, this is against the background of the bankrupt economy being propped up by the US/UK/EU to the tune of billions of dollars per month. How do you fancy living in a country with a drop in GDP of 40% this year? And there is no sign of any change in the future, at least not until the Kiev regime collapses, Zelensky leaves for Miami from the roof of the US embassy via helicopter (remember Saigon?), Nazis cling to the outside of US aircraft taking off from Borispol Airport (remember Kabul?), other fanatical nationalists leave for Poland (some already have), and Russia liberates the whole country, as now seems necessary and inevitable.

Property prices in central Kiev have fallen. Many are trying to move out, as there are mainly flats and also the explosions are mainly in Kiev. Of course, if you are in a high-rise block, you will never sell unless you are on a low floor. Nobody wants to get stuck in a lift or, almost as bad, if you have to take your groceries up to the fifteenth floor by the stairs every day.

You have to do everything yourself. There are few workmen left because they have been abducted, screaming and kicking, into the armed forces. If they are lucky, they will be able to surrender to their Russian brothers before they get turned into body dust or shot in the back by the hated Ukrainian secret police. The workmen who are left charge astronomical rates. My relatives are very glad that they finally completed everything just a few weeks before it all began in February. Kiev must prepare for a winter without heat, water or electricity, warns the mayor. (Actually it is the power outages that are causing all the misery in all its variegated forms.)

Last Thursday X saw a bad accident on the road nearby: the traffic lights were not working because of a power cut. That is happening all over. The streets are in darkness, no lights.

Many work from home, or used to. That is difficult now, because at best you only have three to four hours of electricity before it goes off for at least the same amount of time. There is no light. And then even the best batteries in a computer mean that you lose power after an hour or two – that is, if you have the internet, which is not all the time.

And remember to charge up your phone as soon as the power comes back on. The power will not last and may go off all day. You have no way of knowing. And when the power goes off, the boiler also goes off. No heating, no hot water. The windows are taped across in Xs against possible missile blasts, which would cause the glass to shatter. My relatives saw a missile going over last May. It landed in Kiev.

And sometimes the washing machine will stop half-way through the cycle. Power-cut. That is inconvenient. And always remember to carry a flashlight in your pocket or handbag and have at least one other one in the house. Many are using Swedish-made primus stoves to cook – if you can get one and the refills. Some Swedes are doing well out of this.

As for shopping, well, the opening hours change with the power cuts, though corner shops remain open, if dark. And of course, Kiev has gone back to a cash economy. The card machines will not work – no electricity. Hopefully, the bank cash dispensers will get restocked often enough. That is, if you have money in your account.

My relatives do not have a car. Many of the Ukrainians who are wealthy enough to have cars drove to the West last March/April/May with their recruitment age sons (bribes of up to $5,000 a time to the border guards, who left last), and now live in cramped quarters in the houses of Western people naïve enough and once prosperous enough to take them. Central Kiev in the dark, according to the UK's Guardian. The Brits have been and continue to be in the lead of the disinformation effort on Ukraine. How do they explain this situation now, if the Ukrainian forces were winning the war?

My relatives are very lucky because they can get on minibuses to take them to their house in the country. Just a wooden affair, but there are vegetables there, especially potatoes, and lots of firewood. They had a busy summer in the large vegetable garden. They prepared for the winter, picking, bottling and pickling. The only way of heating there is putting wood in the stove. No gas, but then you do not need any. And you can even live without electricity, as there is a stock of candles. The only thing – it gets really cold there in the winter, -20 or -30 outside, -10 inside, unless you heat constantly. So you stay inside as much as possible and prepare lots of dry firewood for years before.

All of this is a warning to Western Europe. I know you are being distracted by the World Cup soccer circus. Do not be. You too voted for US puppet-leaders like Zelensky? You too wanted to be Ukrainianised by the US? Then this is your future too. You have been warned. I have friends in Latvia, Lithuania and Moldova. They are already living like this. This is a virus that is creeping westwards towards you.

You are seeing your future – unless you can get rid of your pro-Nazi puppet-governments in time. Elect Russia-friendly governments. Make friends with your neighbours next door, in the east of Europe. (Never heard of ‘love your neighbour’?). Moscow is 1,600 kilometres from Berlin, around 2,500 kilometres from Rome, Paris and London. You know it makes sense. You could be nice and warm soon.

ABOUT THE AUTHOR / SOURCE
Batiushka is a patriotic Russian observer of current events in Europe.